Astronauts can survive in their spacesuits as long as the oxygen tanks allow them to continue breathing. The two oxygen tanks and the emergency oxygen supply in current EMU suits collectively contain 6.5 to 8 hours (+ 30 minutes) worth of oxygen.

The human mind has forever been perplexed by the intricacies and mysteries of space. From believing in a geocentric flat Earth and photographing the shadow of a black hole, to fantasizing about a space elevator and witnessing a private company execute a human orbital spaceflight, we continue to make massive strides in the field of astronomy.

These advancements keep the (debatable) dream of expanding human society outwards into space alive. However, such dreams beg the question, is it possible to survive in space forever?

We should all know that the answer to this question is a resounding no.

But what about spacesuits? The Academy award-winning film Gravity portrays the struggles of an astronaut drifting through space in her spacesuit and details how she survives against all odds. Is it really possible to survive in open space in nothing but a spacesuit? And if so, for how long? 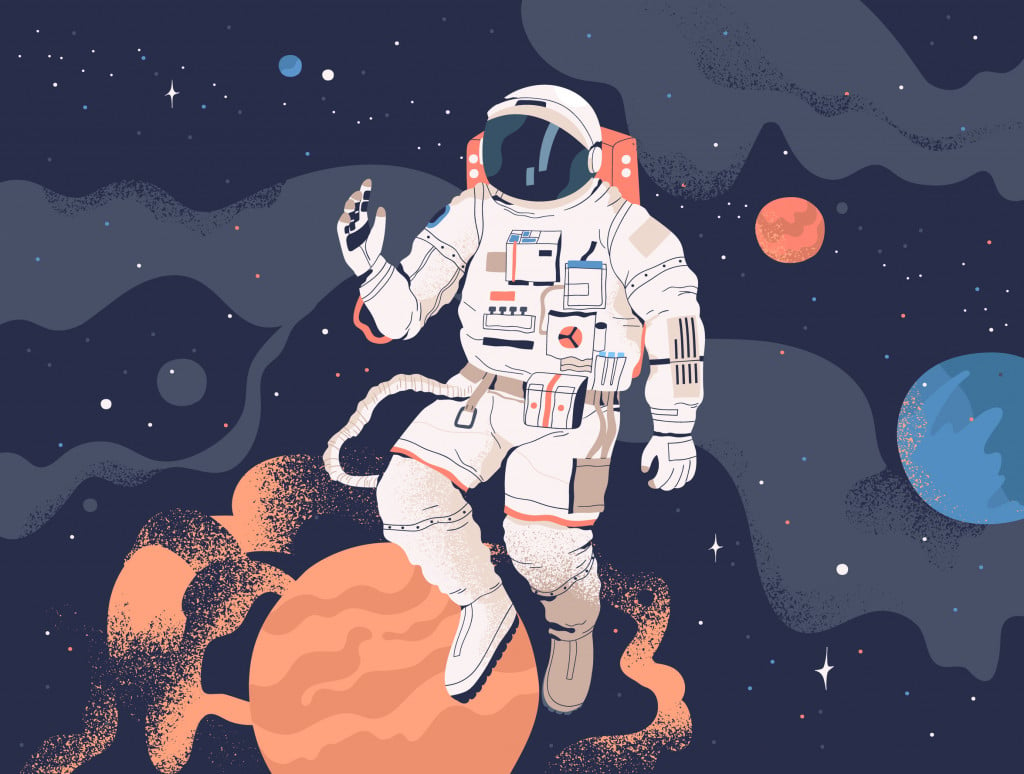 Can astronauts survive long enough in their spacesuits to build our future houses? (Photo Credit : GoodStudio/Shutterstock)

What threats do astronauts face in open space?

Before we get to answering how and for how long spacesuits can protect astronauts, we should familiarize ourselves with what threats exist in open space.

Starting off with the obvious, space is devoid of any breathable oxygen, which is the primary reason we cannot survive up there. The human body has only enough reserved oxygen in the bloodstream to stay conscious for about 15 seconds, after which deoxygenated blood is supplied to the brain and unconsciousness sets in. However, that would not necessarily be a death sentence. If the unconscious astronaut is pulled back into a breathable space within a minute or two, he/she might survive.

Also, as counter-intuitive as it sounds, holding your breath in space will actually result in an even quicker death.

The air inside our lungs exerts constant pressure on its walls. This pressure is equal to the atmospheric pressure of Earth and fluctuates ever so slightly when we need to breathe in and out. Space lacks an atmosphere, and therefore lacks atmospheric pressure. With no atmospheric pressure to balance out the internal pressure of air, our lungs will start expanding and ultimately rupture. The expanding air will then rush into the circulatory system and can cause an air embolism. The rupturing will be accelerated if one were to hold their breath in open space and prevent the rapidly expanding air from leaving the body. So, while it may sound absurd, the first thing a person stranded in open space should do is exhale.

Ebullism, the formation of gas bubbles in bodily fluids, is another (possibly) deadly phenomenon prompted by the absence of atmospheric pressure.

The boiling point of a liquid is the temperature at which the vapor pressure of the liquid equals the pressure surrounding it. Again, with no external pressure in space, the boiling point of bodily fluids (saliva, tears, sweat, etc.) is drastically reduced, so they instantaneously start vaporizing. Blood doesn’t boil, fortunately, as the circulatory system is capable of maintaining blood pressure and restraining it from boiling off. However, the nitrogen molecules dissolved in the bloodstream do vaporize and will cause the tissues to inflate. The body will balloon to twice its normal size and endure some serious tissue damage.

Fortunately, our skin is sufficiently elastic to hold the vapor inside and prevent our body from inflating to a level where it explodes in open space. The inflated body will return to its normal size if brought back to a normal atmospheric pressure. 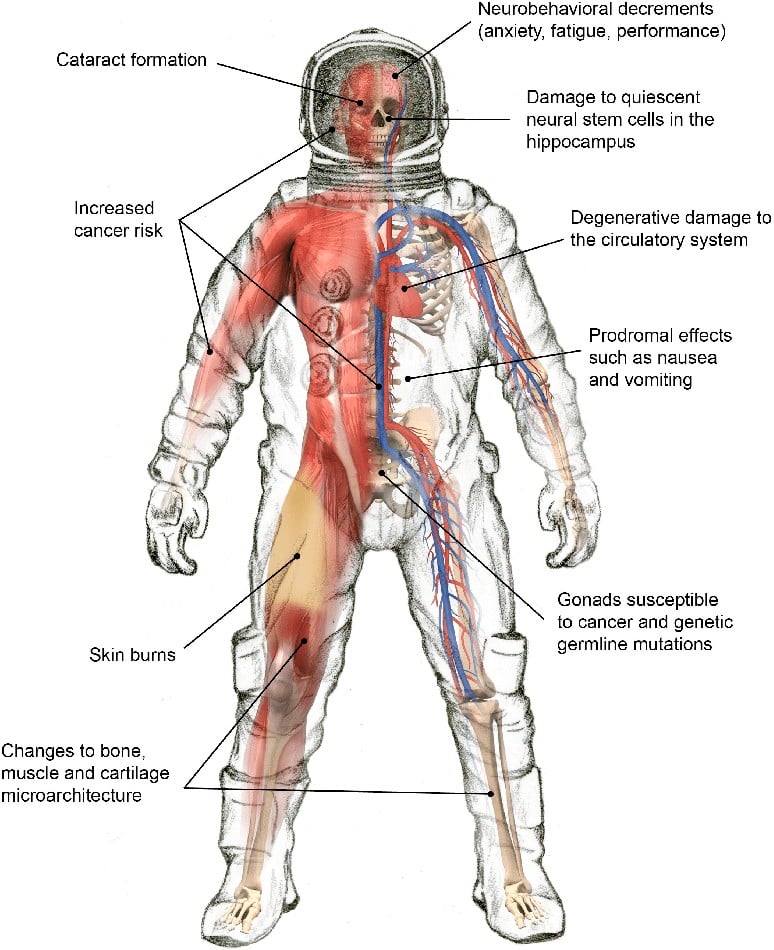 Additionally, astronauts in open space are exposed to unfiltered cosmic radiation and solar wind. Apart from causing some fatal sunburn, they can also damage/mutate DNA, increase the chances of cancer and cataracts, and lead to sterility. There are also extremely fast-moving micrometeoroids and orbital debris that could penetrate the human body like a bullet.

Space exploration movies and books have led us to believe that we would instantly freeze in open space, but that is not the case. While space is indeed cold (depending on where you are), it also lacks any form of matter (definition of vacuum), and the only way left for heat to leave the body is through radiation (conduction and convection require a medium for heat transfer). Given the rate at which heat transfer via radiation occurs, the human body in space would freeze within 12-20 hours.

To sum it all up, an astronaut in open space without a spacesuit would stay conscious for 15 seconds and survive for a minute or two before being slain by one of the above factors and eventually freezing into a popsicle.

Astronauts pack two different types of spacesuits on their wanderlust journeys to outer space. The first type, a pressure suit, is worn inside the spaceship, during lift-off, & when re-entering Earth’s atmosphere. The pressure suits protect astronauts in the case of depressurization emergencies and any other accidents that may occur at the time of lift-off or landing. Other than that, these suits do not include an oxygen supply tank or any additional padding to shield against cosmic radiation, meaning that they cannot help one survive in open space. At most, the pressure suits will prevent the lungs from exploding and the body from inflating, but the lack of oxygen would still result in death within a minute or two. 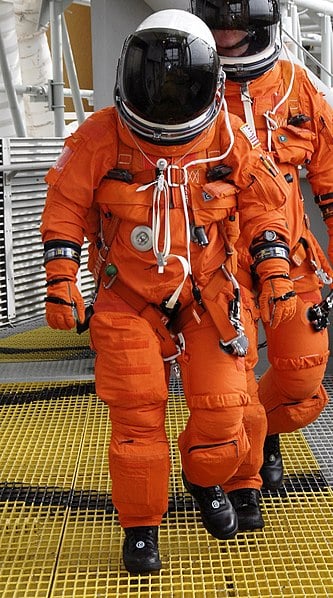 Pressure suits aren’t meant to be worn in open space but only inside the spacecraft. (Photo Credit : NASA/Wikimedia Commons)

The second type of spacesuit astronauts carry is called an Extravehicular Mobility Unit (EMU). As the name suggests, this suit is worn during any extravehicular activities (spacewalks) and is thus built to protect astronauts against all the aforementioned threats.

EMUs, for ease of understanding, can be split into two main components—the pressure garment and the life support system.

The pressure garment is the actual human-shaped suit and consists of four different pieces, namely the upper and lower torso, the cooling garment, and the helmet. 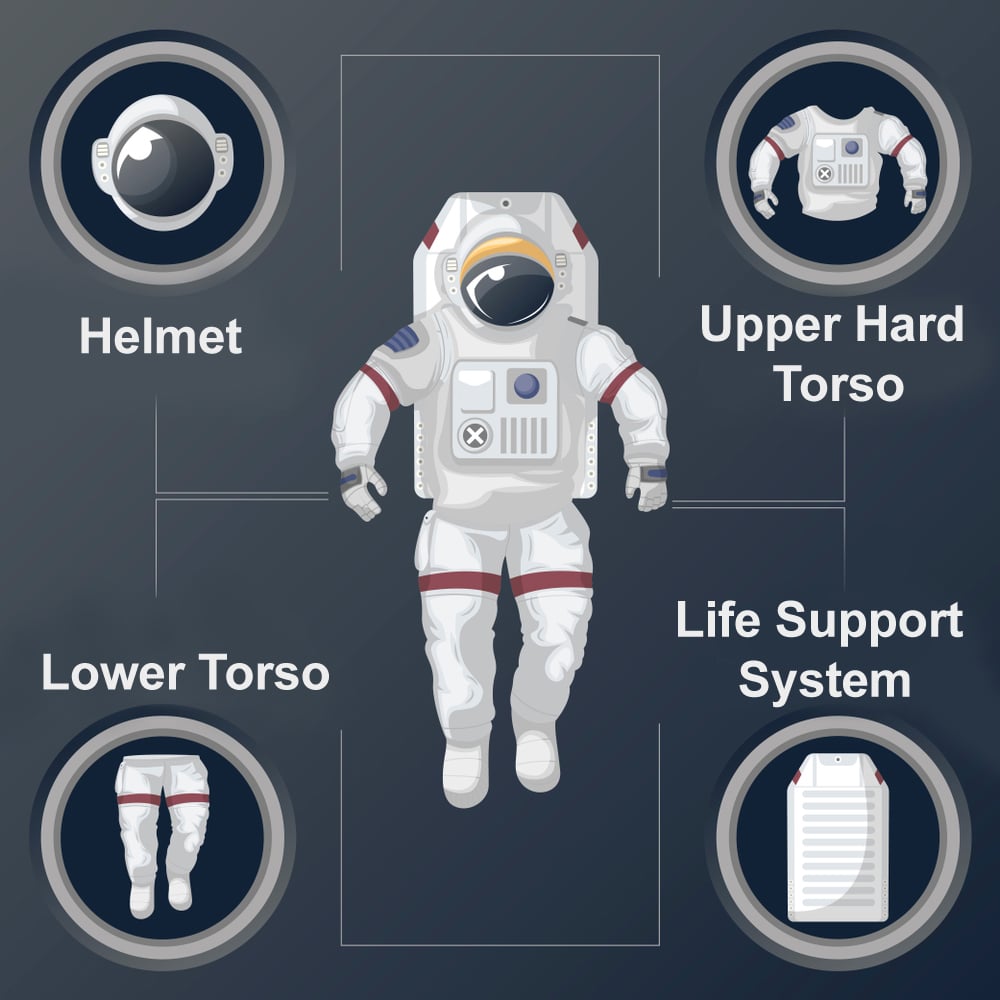 Primary components of an EVA suit.

Starting from the inside out, a cooling garment is the first thing astronauts put on before heading out on their casual spacewalk. The garment is made of mesh spandex and has over 300 feet of tubing laced to it. Water of roughly 40-50°F (4.4-10°C) continuously flows through the tubes to help dissipate body heat.

Next, the hard upper torso is composed of a lightweight fiberglass shell comprising multiple layers. A bladder layer of urethane-coated nylon sits at the bottom (over three layers of the cooling garment) and performs the essential task of regulating body pressure. The bladder layer is followed by a Dacron restraining layer and a tear-resistant nylon layer. The next five layers are made of Mylar to maintain body temperature, with the subsequent layers being waterproof & fireproof. The outermost white layer helps reflect sunlight and is composed of three different materials (Gomex, Kevlar, and Nomex). Underneath all these layers, astronauts also wear a diaper for when nature comes calling. Gloves with heating tech help keep the fingers warm so that astronauts can retain dexterity.

The life support system, arms, helmet, display and control module, etc. are all mounted on the upper torso, while a safety tether is hooked to the D rings on the lower torso. A waist bearing allows astronauts to freely move and turn. 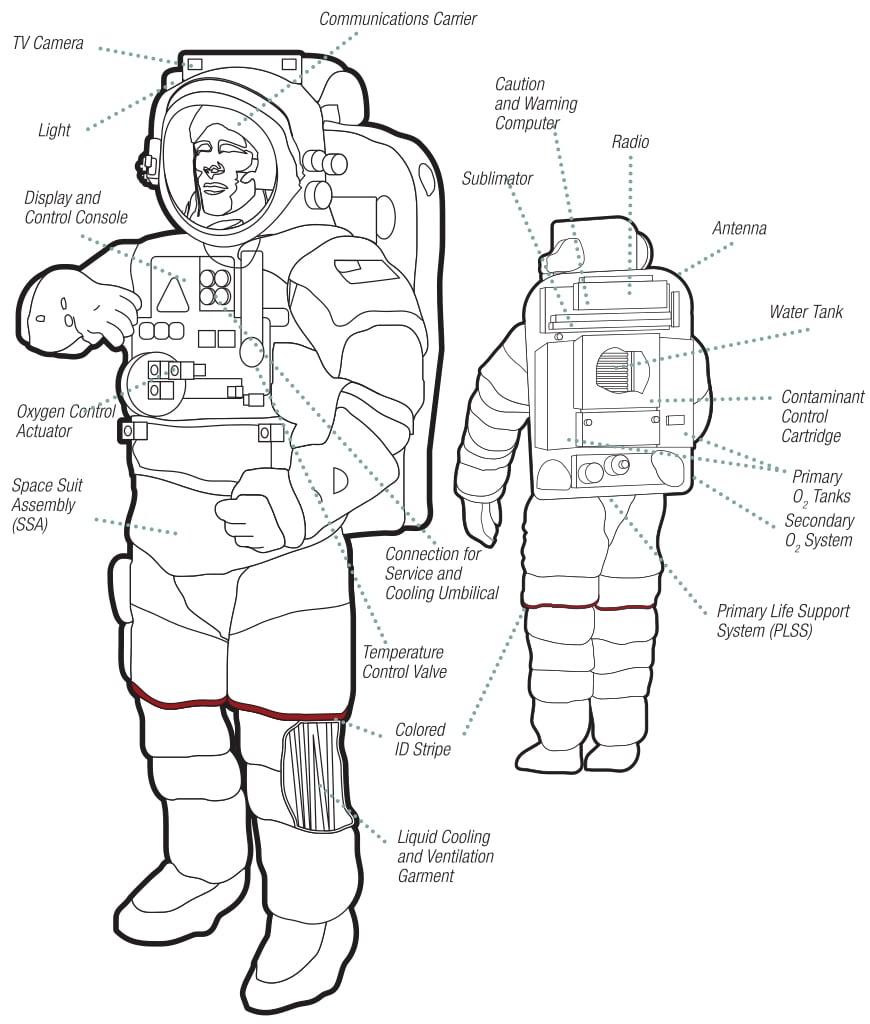 The space helmet is made of strong plastic and, similar to the suit, it helps provide a pressurized space. A gold-plated visor and sunshades shield astronauts from direct sunlight, and the ventilation system forwards oxygen from the life support system. Cameras and lights are mounted to the side of the helmet to record and assist in extravehicular activities. A snoopy cap consisting of headphones and microphones is used to communicate with fellow astronauts.

Regarding the life support system, it is a backpack full of essential goodies without which the spacesuit would just be a fancy dress outfit. The life support system houses the oxygen tanks, carbon dioxide removal filters, battery, pressure regulator, radio and other apparatus for communication, the water tank and pump, cooling system, fans for circulating oxygen, etc. All the electrical and mechanical equipment in the LSS are controlled using a display and control module mounted on the chest area of the upper torso.

The pressure garment and life support system together serve as a “spacecraft for one” and permit astronauts to conduct research on extraterrestrial land or perform essential repair work outside the ISS.

So, how long can astronauts survive in their spacesuits?

The multi-layered upper and lower torso protect astronauts from harmful cosmic radiation and micrometeoroids, as well as help maintain body temperature and provide a  pressurized atmosphere. As is the case on Earth, our three basic needs (food, water, and oxygen) also act as the limiting factor in space.

Since extravehicular activities last for several hours, astronauts prefer to eat and drink before heading out. To be cautious, they also fill up the in-suit drink bag and attach a fruit bar to their suit. Astronauts can choose between a 21 oz (0.6 L) or a 32 oz (0.9 L) drink bag, according to their needs. A valved tube from the drink bag extends near the mouth inside the helmet. The valve automatically opens up when the astronaut sucks for water. The fruit bar is wrapped in edible rice paper and is placed inside a sleeve near the neck, with the upper end extending near the mouth. Every time the astronaut takes a bite of the bar, he/she pulls on it and in the process, sets up the next bite. The drink bag and fruit bar are both attached to the upper torso using velcro.

The two oxygen tanks inside the LSS backpack collectively allow for roughly 6.5 to 8 hours of extravehicular activity. The range varies depending on one’s metabolic rate, as the amount of oxygen consumed and carbon dioxide produced is different for everyone. Also, the EMUs are pressurized to 1/3 of Earth’s atmospheric pressure, and at this pressure, air doesn’t hold a sufficient amount of oxygen. Therefore, the tanks are filled with 100% pure oxygen. The carbon dioxide removal system is also essential, as it filters the exhaled air and helps recirculate the unabsorbed oxygen. An emergency oxygen pack is attached to the base of the primary life support system and provides another 30 minutes’ worth of oxygen supply.

So, while space threatens human life in a number of ways, the time period for which astronauts can survive in their spacesuits boils down to the amount of oxygen the suits hold. Current suits only allow for 6.5 to 8 hours (+ 30 minutes) of space exploration time, at which points astronauts will need to return to their spacecraft and refill the oxygen tanks if they wish to continue. The current record for the longest spacewalk belongs to Jim Voss and Susan Helms, who spent 8 hours and 56 minutes performing maintenance work on the ISS.

However, we aren’t planning on building our future houses in open space, so unless you’re an astronaut, you shouldn’t have to worry too much about the details and limitations of a spacesuit. It is the other planets in our solar system that we have our greedy eyes on. If you have your heart set on living off-world someday, check out how long you can survive on different celestial bodies to learn which celestial destinations should be on your list!