The retailer of the dress confirmed that the real color of the ‘Lace Bodycon Dress’ was actually blue and black. So, although the dress is blue and black, your unconscious overthinking makes you see it as white and gold.

The retailer of the dress confirmed that the real color of the ‘Lace Bodycon Dress’ was actually blue and black. So, although the dress is blue and black, your unconscious overthinking makes you see it as white and gold.

Have you ever wondered whether your idea of the color red is the same as other people’s perception of the color red? If you believe that everyone sees the same thing, you may be entirely wrong. Dressgate#2015 is undeniable evidence for your fallacy. Yes, I’m talking about the infamous, yet innocuous, striped dress that took the internet by storm when its picture was posted in February 2015, sparking a raging debate among the endless Internet population regarding the color combination of the dress.

Some perceived it as blue-black, while others saw it as gold and white, and a small margin of people even saw it as brown and blue.

The debate was so intense that some anxious souls proclaimed that they were colorblind due to their inability to see what the majority perceived as blue and black. Lo and behold, the dress was actually blue and black! A question arises from all of this… why did different people see different colors on the same dress? Let’s turn to vision science for answers.

Our Brain on ‘The Dress’

Researchers and scientists who study the visual system were equally puzzled by this rare color illusion. There have been extensive studies of ambiguous figure illusions (e.g., face/vase, duck/rabbit) that have helped scientists reveal mechanisms and principles of human visual perception, but this color phenomenon is slightly more unique.

The dress illusion presented a rare opportunity, as the illusion was related to color. Color is the wavelength or frequency at which light is reflected off a surface. However, the dress surely reflected the same amount of light for everyone, so it was clear that the difference arose later, once an individual’s brain began processing the wavelengths. 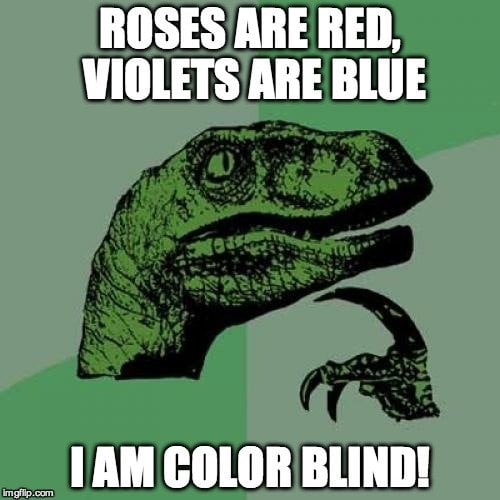 Now, scientists also think that people’s familiarity with the amount of light in a given environment may guide their judgments about color. Hence, people who are more frequently exposed to daylight are more likely to make adjustments to their judgments about a wavelength by thinking about how daylight will interact with the wavelength. That is how some people reach a decision about the color they see and therefore perceive the dress as gold and white. In contrast, those who are more frequently exposed to artificial or incandescent light do not make these mental adjustments and perceive the color of the dress as it is – blue and black.

The square at the center and square at the top right are the same shade, but we judge wrong, as we expect the pillar’s shadow to make it appear darker.

This additional activation is possibly indicative of the extra effort that white-gold perceivers make to factor in daylight, which leads them to come to the wrong conclusions about color.

Are Blue/Black and White/Gold Brains Different?

No! Thus far, research suggests that the difference arises because you use your brain differently. The Dress illusion reminds us of the fallacies inherent in our visual sense and the existence of individual differences in our abilities of perception. So, although the dress is blue and black, your unconscious overthinking makes you see it as white and gold. 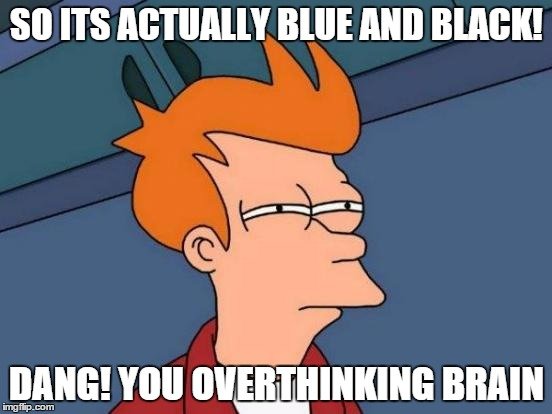 The next time you want to insist that you’re right and win a fight over the shade of color on a wall, dress, or car…check whether or not you’re analyzing things properly before you waste your time on an endless argument!

How much do you know about the true color of ‘the dress’?