Some parasites have the ability to change their hosts behaviour. They do this by hijacking the host’s nervous system by secreting neurotransmitters.

Microbes are scary. We can’t see, smell or touch them. The only way we know they exist is through years of research. Antonie van Leeuwenhoek, a rich Dutch trader with a voracious appetite for looking at everything under a microscope, was the first person to discover bacteria back in the 17th century. It was another 150 years before Louis Pasteur popularized the idea that these creepy critters can cause diseases.

Today, we’ve discovered the crazy ways that microorganisms can trick their hosts to survive. The most bizarre of these abilities is mind control. Some germs have developed specialized techniques to manipulate their host’s behavior. Their mind control is so powerful that hosts might end up losing their lives due to their microbial overlords. An infected rat (maybe, we didn’t check) would have a lower fear response.

Their crime? Mind-controlling their hosts into self-sacrifice

Affectionately called Toxo, this bacteria might be the reason you’re in so love with your cat. This protozoan parasite use cats to mate and lay their eggs. The eggs leave through the cat’s poop, waiting to enter an intermediate host where they can hatch and grow up. Once they’re all grown up, the Toxo returns to the cats, restarting the cycle.

How do they return to the cat? By mind-controlling the intermediate host to sacrifice itself to a cat, of course.

The most common intermediate hosts are rodents, a cat’s natural prey. Toxo hijacks the rat’s mind, making it forget to be scared of cats. Researchers have found that rats infected with Toxo don’t run away from cats like their uninfected furry mates. In fact, their response to other scary things is also dulled.

These facts are mildly disturbing in rats, but very scary when the same thing is possible in humans. One-third of the population has toxoplasmosis, making it one of the most common parasitic infection amongst humans. Toxo could be making that one-third less scared and more risk-prone. A study published in 2002 found that people who had toxoplasmosis got into more car accidents. Scientists are even investigating the connection between toxo and schizophrenia.

The leading theory for how toxo controls its victims is through dopamine. Dopamine is a neurotransmitter, a chemical that helps neurons pass information between themselves, especially those involved in fear, locomotion and the reward centers of the brain. The specifics of how Toxo uses dopamine remains unresolved.

Toxoplasmosis: Can Your Cat Make You Go Crazy? 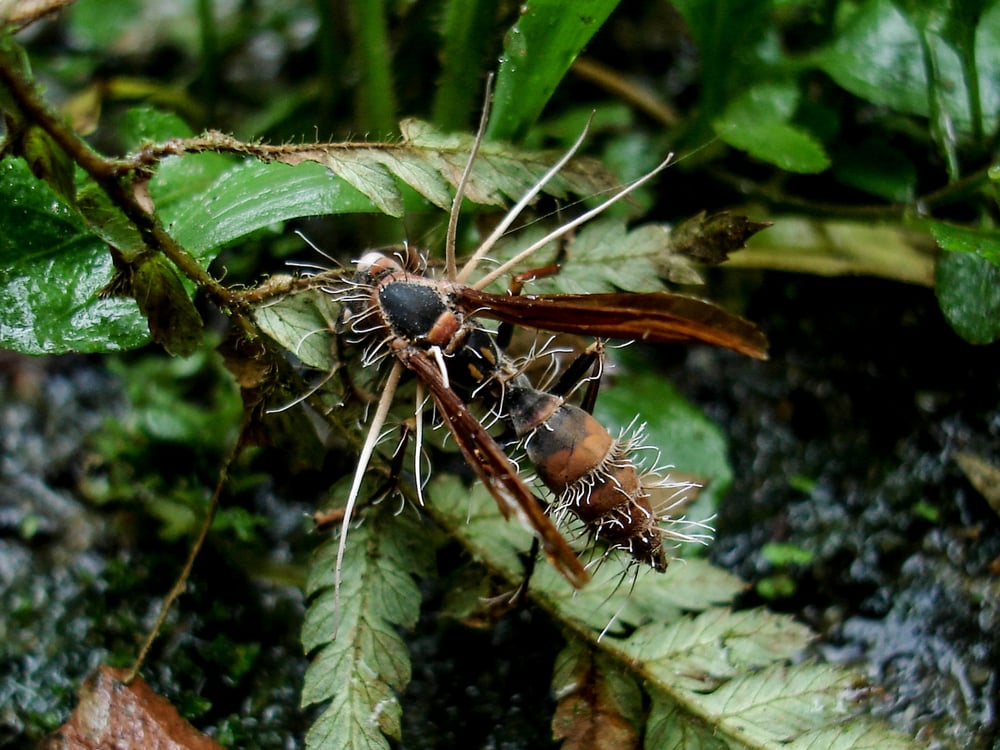 The ant is really tired of how finicky the fungus is. He’s probably thinking, “Do I really have to hang upside down?” (Photo Credit : IPBio/Shutterstock)

In the popular horror adventure video game, The Last of Us, the world is suffering from a brain infection cause by none other than the cordyceps fungi. Cordyceps have also serviced as the cause behind zombies in the book The Girl with All the Gifts and in the popular web comic called ‘Boyfriend of the Dead’. These popular culture uses are all appropriate, given how these parasites function.

The real-life cordyceps fungi infects insects, the most notable of which are Ophiocordyceps unilateralis, which infects carpenter ants.

L. unilateralis, or zombie-ant fungus, becomes a puppet master controlling its enslaved ant’s every action. The poor ant that gets infected with the spores of the fungus may soon start exhibiting odd symptoms. They begin to neglect their work and begin climbing up stems instead. Once up there, they hang upside down from a leaf. Soon, the cordyceps erupt from the ant’s body, bursting its spores to infect other ant homes.

This BBC video with legendary David Attenborough narrating shows the grotesque and ingenious fungus at work.

How the cordyceps accomplishes this mental takeover remains a mystery. The fungus spore starts out as a single cell and then divides. These cells come together to form a network of tubes that stretch through the ant’s body. One explanation for the mind control is puppetry, like how a puppet master pulls individual strings to move a puppet around; in a similar way, the fungus controls individual ant muscles. However, this doesn’t explain everything, and more research is continually being done. Horse hair worms coming out from a cricket. The worm got its name because people thought it was horse hair becoming animated when in water. (Photo Credit : Alastair Rae/Wikimedia Commons)

Crime? Eating a host from the inside out

The horse hair worms or Gordian worms feed on certain insects by completely hollowing out their hosts . These thin, hair-like worms take over for their host’s childhood and adulthood, as well as all their talents, converting their hosts into their personal home. There are more than 300 species of known Horse hair worms, all of which parasitize different insects. The creepiest of these are the parasites that infect grasshoppers, crickets and katydids.

Paragordius varius eggs settle at the bottom of water bodies, where they wait to be eaten by a cricket larva. The larva grows up, metamorphoses, and leaves its aqueous dwellings. On land, it goes about living its normal life, or so the worms want you to believe. On the inside, however, these worms are changing the poor cricket. They begin by making it stop their chirping. Soon, the worms make the cricket desire to swim, jumping in at the sight of water. The worms now leave their hollowed out cricket house to mate and lay eggs that will end up in their very own cricket house.

As to how they achieve this mind control, like the above two (and loads of other parasites), researchers haven’t found all the pieces of the puzzle, let alone put them in proper place.

One strategy is secreting neurotransmitters. It alters the way the cricket’s nervous system works and thus changes its behavior. Another suggested mechanism is the expression of certain geotactic proteins, which are proteins that are sensitive factors such as gravity, magnetic fields, etc., as was found in a 2005 paper. The green strip part is the brood sac of the flatworm parasite.

L. paradoxum, also called the green-banded broodsac, is a flatworm that inhabits gastropods, using them as their own brooding room. The flatworm has a life cycle like toxo—it uses snails to lay eggs, and then needs them to enter a vertebrate, such as a bird, to hatch and mature, only to once again enter a snail.

The worm enters the snail when the snail eats some bird poop. It encroaches into the eyes of the snail, forming its brood sac and filling it with eggs. This arrangement looks like pulsating and mesmerizing caterpillars, all of which is meant to entice a bird to eat the snail. However, this beauty isn’t enough. Snails like dark and damp areas, places that birds don’t visit often. Here’s where the mind control comes in!

The worms force the snails out into the open where birds can easily spot them. They do this by turning down the snail’s aversion to light. A guess as to how it does this is precisely done, again, is frustratingly not certain. It could be the snail hijacking the snail’s light-detecting brain network.

However, the poor snail ends up as escargot for birds, leaving the worm eggs to hatch inside the bird, growing and feeding. An infected caterpillar with wasp cacoons on its back. (Photo Credit : 8thstar /Wikimedia Commons)

Baculoviruses are the ultimate viruses. They have not one, but two hosts. In fact, one of its hosts is a parasite itself—how meta! The virus infects some species of parasitoid wasps, which in turn use caterpillars as hosts for their larva. The virus hops onto the caterpillar, along with the baby wasps.

The virus has the best interest of the wasps in mind. They are, after all, its main hosts. Therefore, to ensure that the baby wasps in the caterpillar survive, it takes over the caterpillar’s mind and body. The caterpillar develops a ravenous appetite, eating everything it can. All the while, the larvae are growing from this constant feast. Once they are all grown up, the larvae break out of the caterpillar’s body and spin their cocoons to metamorphose.

However, the story doesn’t end here. The caterpillar could just leave to live the little life it has left, but it stays to protect the transforming young. Scientists believe that this bizarre behavior is because of the virus. In the end, the virus gains a new host, and the caterpillar makes that possible.

A 2010 study by Chris Rieber found that those infected with the influenza virus were more social than others. The virus spreads through the air when an infected person sneezes or coughs. If the virus does make us more social, it would be a sinister masterstroke on nature’s part, but there isn’t enough evidence to confirm or deny this.

This one gets an honorary mentions because it’s fairly common knowledge that rabies victims develop an intense fear of water, although it isn’t an actual fear of water. In the later stages of rabies, swallowing and breathing becomes difficult for patients. Because of this pain, they panic at the sight of liquid. This didn’t make the cut because it simply isn’t as scary as the others.

Plasmodium is the protozoa that cause malaria. Its behavior change is rather gluttonous, as it makes mosquitoes feed on a greater number of vectors (or animals). The parasites get access to a wider playing field, and the mosquito gets more food.

The next time you watch a zombie movie or see an ant hanging upside down from a leaf, beware! The parasites might come after you next. 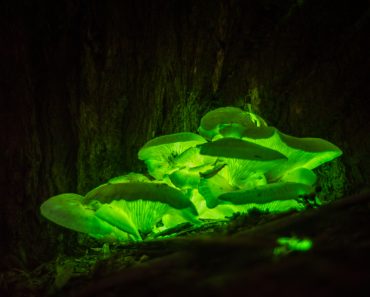