Contrary to popular belief, cockroaches cannot survive a nuclear explosion; however, it is true that cockroaches are more tolerant of certain ionizing radiation than humans. Even so, they cannot survive bug spray, as it consists of powerful neurotoxic substances.

Cockroaches are quite amazing creatures. People who cringe at the sight of these little insects or who find them disgusting may not share this opinion, but if you look at the feats that cockroaches are capable of achieving, you would agree too… probably.

A cockroach can hold its breath for almost 40 minutes and therefore survive for a long time underwater. It can survive a few days without water, a month without food, and even a few weeks without a head!

Contrary to popular belief, cockroaches cannot survive a nuclear explosion any more than they can survive an onslaught from their deadly enemy – bug spray.

The likes of Raid, Hit, Baygon, and other popular brands are fatal to these roaches. So, how do these insecticides kill such tough and durable insects so quickly?

Humans have been using insecticides derived from natural sources since ancient times. Most of these strategies originally came from plant chemicals or chemicals such as sulfur or sodium chlorate. Today, we have a wide arsenal of insecticides that we can spray to eliminate our bug problems. The origin of our modern anti-pest weaponry began in the 1940s with DDT and other synthetic chemicals.

How Do Bug Sprays (Like Raid and Baygon) Kill Cockroaches?

Bug sprays or insecticides are chemical compounds that inhibit certain physiological functions. Many classes of insecticides differ in their synthesis, how they affect the pest, and whether they indiscriminately affect all insects or are specific to a particular type or family. 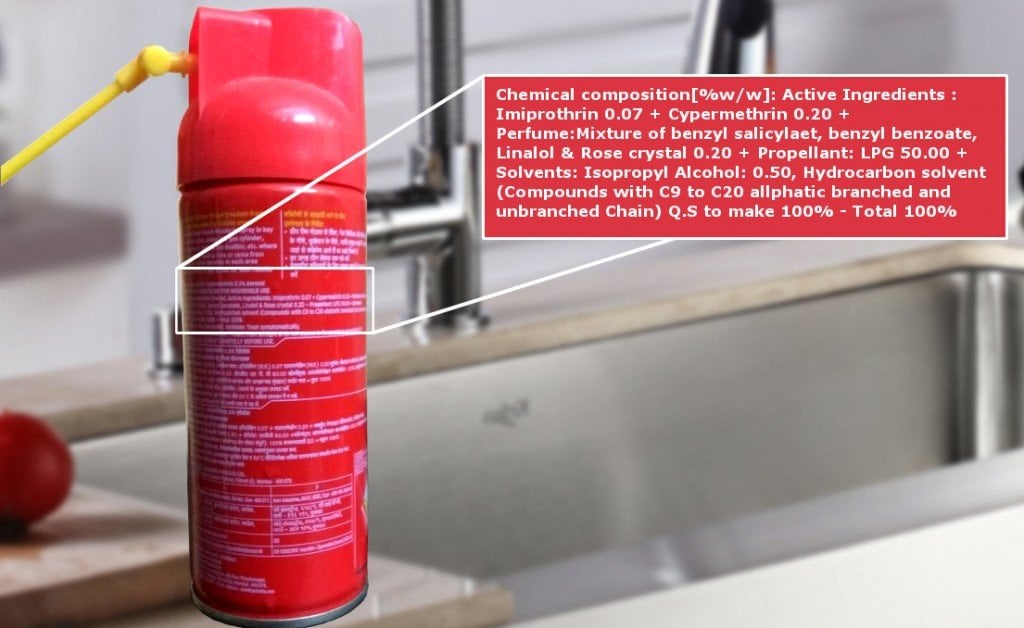 A bug spray. Notice the composition printed on its cover.

Popular roach-killing bug sprays are a concoction of several pesticides that fall under two broad types – pyrethoids and carbamates.

Pyrethroids are neurotoxic for insects.

Pyrethroids are fast-acting compounds found in most household insecticides and insect repellents. Pyrethroids are synthetic compounds but resemble a natural pesticide made from daisy flowers called pyrethrin.

Pyrethrin is extracted from the ‘Pyrethrum daisy’, Chrysanthemum cinerariaefolium. The crushed flower has been used as an insecticide for over 2,000 years. In fact, inhaling too much of the flower’s scent is harmful as it can cause side effects such as asthmatic breathing, sneezing, headaches, etc. Pyrethroids are chemically similar to pyrethrin but synthetically produced.

Pyrethroids are neurotoxic and impair the function of the neurons in a cockroach, thereby paralyzing it. The chemicals target proteins that transport sodium and potassium across the neuron membrane. Neurons can send impulses through the controlled entry and exit of these ions through the appropriate protein channels. Pyrethroids interfere with these channels and keep them open, impairing the functioning of the neuron.

Another reason why pyrethroids are a popular choice for bug sprays is that a very low dose of pyrethroids can kill cockroaches. The same concentration is relatively harmless to humans. However, they can harm sensitive individuals or aquatic organisms such as fish when used directly in water, as they dissolve very poorly.

The structural formula of Allethrin, a synthetic pyrethroid commonly found in bug sprays.

Some commonly used pyrethroids include allethrin, tetramethrin, resmethrin, cyfluthrin, permethrin, and esfenvalerate. Also known as ‘first-generation pyrethroids’, these were primarily developed in the 1940s.

The other common chemical pesticide component of bug spray is a carbamate. This class of pesticide is derived from carbonic acid.

These compounds target a specific enzyme called cholinesterase. This enzyme plays a role in breaking down the neurotransmitter, a chemical messenger of the nervous system called acetylcholine. Neurons release acetylcholine to communicate with other neurons and muscles, giving the latter a signal to contract.

In normal function, the body allows acetylcholine to be present in the extracellular environment for a very short period of time. The cholinesterase enzyme breaks down the acetylcholine molecule, thereby preventing prolonged signaling to other neurons and muscles.

Carbamates prevent cholinesterases from breaking down acetylcholine, which causes the molecule to constantly stimulate other neurons, but more importantly, it causes muscles to contract.

This has serious consequences for muscles such as the heart and those involved in respiration. Disturbances in the nerve impulse cause havoc throughout the insect’s body, which eventually leads to the insect’s death.

These and thousands of other insecticides are employed today to keep our homes, gardens, and crops safe from a range of pests, and their use has improved our standard of living and increased crop yields, but there is a downside to the story.

Many of these pesticides remain in the soil and body of the animals that could inhale or consume them. If other animals feed on insects that have ingested the pesticide or drink water from places where insecticides are present, these animals often have unintended effects. This is known as the bioaccumulation of pesticides.

The prolific environmentalist Rachel Carson cautioned our world against the excessive use of pesticides. In her revolutionary book Silent Spring, she writes, “A Who’s Who of pesticides is therefore of concern to us all. If we are going to live so intimately with these chemicals, eating and drinking them, taking them into the very marrow of our bones – we had better know something about their nature and their power.”

Test your knowledge of bugspray! 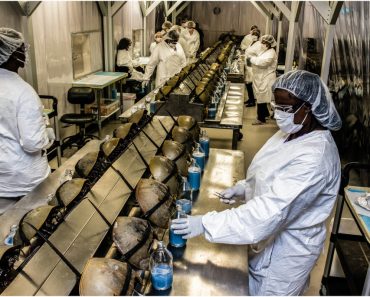