No, cockroaches cannot survive a nuclear explosion. While they may be able to withstand extreme radiation exposure due to the simple design of their bodies and slower cell cycles, they certainly cannot tolerate the high amount of heat energy produced immediately following the explosion.

Cockroaches are fine when they stay on the ground, but you know that things are getting serious when you see one break out its wings and start flapping around your head. Cue running around your house, screaming like a small child. Don’t worry, we’ve all done it.

Cockroaches have been hanging around on this planet for about 200 million years now, i.e., since the Jurassic Period (when dinosaurs were still alive and well). That’s a long, long time, which means they even survived the asteroid that killed those massive, planet-dominating creatures.

The myth that cockroaches will inherit the Earth in the event of nuclear warfare surfaced shortly after the United States dropped atomic bombs on Hiroshima and Nagasaki in 1945. Reports claimed that the ancient insects were the only survivors in the rubble of the wrecked Japanese cities. What exactly are these buggers made of that enables them to survive such unbelievable energy and destructive force? 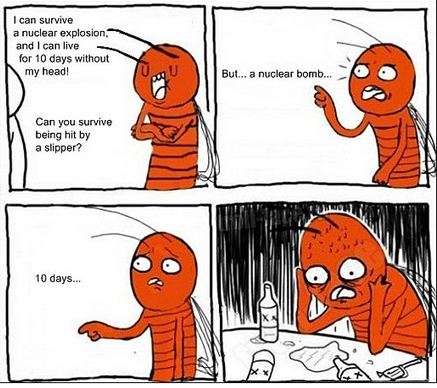 How Much Radiation Can Cockroaches Withstand?

In order to test the credibility of the claim that “cockroaches can survive nuclear warfare”, the Discovery Channel team tested a set of German cockroaches to determine just how much radiation they could bear before finally succumbing. They used three levels of Cobalt-60 metal for this experiment.

They started with a baseline exposure of 1,000 radon units (rads) of cobalt-60, which is capable of killing a person in 10 minutes, and followed it up with 10,000 and 100,000 rad exposures on separate groups of roaches. For reference sake, the bomb dropped on Hiroshima emitted radioactive gamma rays at a strength of around 10,000 rads. The cockroaches finally gave in at 100,000 rad… unbelievable!

However, biologist Mark Elgar from the University of Melbourne claims that the results of the test that Mythbusters conducted are not entirely accurate, because the test only looked at how many days the cockroaches lived after exposure. They didn’t test their ability to produce viable eggs following exposure.

Researchers have found that humans can safely withstand a one-time exposure of 5 rems. For those who don’t know, a “rem” is an amount of radiation that causes a measured, very specific amount of damage to human tissue. For humans, a dose of 800 rems is considered lethal. It’s interesting to note that most people are exposed to about 16 rems during their lifetime (Source).

Cockroaches, on the other hand, are much ‘stronger’ than humans in terms of tolerating lethal radiation. For the American cockroach, the lethal dose is 67,500 rems, while for the German cockroach, the lethal dose lies somewhere in the range of 90,000 to 105,000 rems! So yes, it’s true that the amount of radiation cockroaches can withstand is equivalent to that of a thermonuclear explosion.

Also Read: How Do Bug Sprays (Like Raid And Baygon) Kill Cockroaches?

How Could Cockroaches Survive A Nuclear Explosion?

Cockroaches’ ability to withstand extreme radiation exposure is due to the simple design of their bodies and slower cell cycles. Cells are said to be most sensitive to radiation when they’re dividing, but given that a typical cockroach only molts about once a week, and its cells only divide within a 48-hour period during that week, about 3/4 of the cockroaches exposed to the blast would not be particularly susceptible to damage by ionizing radiation, at least, relative to those whose cells were currently dividing.

Humans are so vulnerable to these types of radiation because our cells are constantly undergoing changes and renewing themselves.

The results confirmed that cockroaches can survive a nuclear explosion in terms of the radiation, but they would still succumb to the high amount of impact that the bomb produces if they were exposed to the blast.

Nuclear explosions affect life in more ways than one. The impact from the initial blast, the tremendous amount of heat produced, and ionizing radiation released into the air following the blast are the primary ways by which a nuclear blast disrupts basically every form of life that falls within its ‘impact radius’.

Ionizing radiation permanently damages a living creature’s DNA, meaning that it messes up the chemistry of things. This is why prolonged exposure to ionizing radiation can increase one’s risk of cancer.

Following a nuclear explosion, a cockroach, if it’s well protected from the blast’s impact and heat, can survive for a while. However, if everything else has died, cockroaches would eventually run out of food and ultimately die too!

In a nutshell, a cockroach CANNOT survive a nuclear explosion.

Also Read: What If There Were No Cockroaches?

The incredible resilience of cockroaches does make me wonder: What kind of toxins do they have to put in cockroach killers like Hit and Baygon?