If a nuke exploded in space, gamma rays and X-rays would be emitted and would expand to light up the sky. On the surface of the planet, auroras of light would be seen for thousands of miles within minutes of the blast. The explosion would also create a magnetic field, which could disrupt electronic communication.

On the surface of the planet, vivid auroras of light would be seen for thousands of miles within minutes of the blast, because the charged particles from the blast would immediately begin interacting with Earth’s magnetic field.

The image of a mushroom cloud is one of the most recognizable sights in the world, and one of the most terrifying. Although many of our nuclear threats have lessened in the past few decades, there was a time in the 20th century when the fascination and fear of nukes made everyone around the world do some rather crazy things.

Nuclear nations around the world (primarily Russia and the US) tested nuclear weapons underwater, in mountains, in the atmosphere, and even in space!

We can probably imagine what most of those explosions would look like, and what the repercussions would be, but what about that final one? What would happen if a nuclear bomb went off in space?

In the most dramatic stages of the Cold War, Russia and the United States were testing nuclear bombs left and right, and due to fears of a long-range nuclear missile or a satellite delivery system for a nuclear warhead, all eyes were on the skies. The United States had launched a series of tests code named Project Fishbowl, which were high-altitude nuclear weapons tests. The most impressive and historic test in this Project was Starfish Prime. On July 9th, 1962, a 1.4 megaton nuclear bomb was detonated approximately 250 miles above the surface of Earth.

This may sound like insanity today, but those were crazy times, and the resultant explosion and after effects were absolutely incredible.

What Would Happen If A Nuclear Bomb Went Off In Space?

First of all, since there is no atmosphere in space, there was no iconic mushroom cloud, nor a blast wave (which is where most of the damage of a nuclear bomb comes from on Earth). Instead, there was an intense outpouring of not only heat and light, but high-intensity radiation in the form of gamma rays and X-rays, with no atmosphere to interrupt their path. Visually, the blast was roughly spherical, and the wave of radiation and light expanded to light up the sky.

Also Read: Why Does A Nuclear Explosion Create A Mushroom Cloud?

On the surface of the planet, vivid auroras of light would be seen for thousands of miles within minutes of the blast, because the charged particles from the blast would immediately begin interacting with Earth’s magnetic field. Imagine the aurora borealis, more commonly known as the Northern Lights, except spread across thousands of kilometers above the Pacific Ocean. 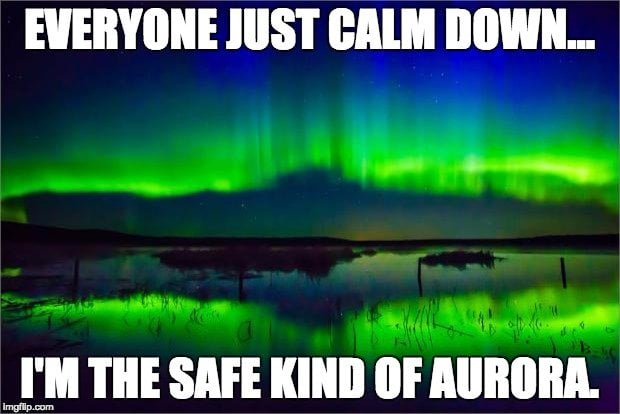 Those ribbons of light and charged particle streams would continue to be seen for hours or even days after the blast (depending on the size of the explosion). In a nuclear blast, there is also quite a bit of debris, which would burn up in the Earth’s upper atmosphere, and heavy ions would also be absorbed by the atmospheric molecules of the planet. These extra radioactive molecules are actually useful in certain ways (to this day!), but we’ll explain in the next section.

Are There Any Other Effects Of A Nuclear Explosion In Space?

Perhaps even more worrying than the huge amount of radiation being dropped into Earth’s atmosphere is the detonation’s impact on electromagnetic signals in a massive area beneath the blast. Essentially, those highly charged, rapidly moving electrons will create a small and incredibly powerful magnetic field, also called an EMP (electromagnetic pulse). You’ve probably seen this in sci-fi movies many times; an EMP bomb cuts off all electronic power within a given area (most famously, perhaps, in The Matrix Trilogy).

In the case of Starfish Prime, that meant power outages over hundreds of miles in Hawaii, blown out streetlights, disruptions in radar and navigation systems, and a complete shut down of electronic communication. This may have been an unintended consequence for the citizens of Hawaii, but it also showed scientists and researchers the true power that a nuke in space could have. It could effectively cripple a nation’s infrastructure, without physically destroying any of it!

Now, consider the size of the bomb used in Starfish Prime (1.4 megatons). Some of the largest nuclear warheads ever created were 50-megaton hydrogen bombs, more than 35x more powerful. Imagine the auroras you’d be able to see if a bomb like that went off in space, and think of the widespread technological devastation from an EMP big enough to shut down Texas!

Finally, regarding the long-term effects of a nuclear weapon detonating in space, that radioactive material falling into the atmosphere isn’t going anywhere. In fact, it dissipates and spreads around the entire planet. Those extra molecules imparted by that nuclear blast can now be accurately measured as a means of dating things, such as trees, wine, and animals. While that may be one useful thing about nuclear testing in space, that certainly doesn’t make the whole process any more sensible.

Clearly, whether they happen on Earth or in space, nuclear detonations are never good news!