A nuclear/atomic explosion creates a mushroom cloud because the detonating bomb suddenly releases a great deal of heat rapidly, which interacts with the cooler surrounding air and makes it less dense. The giant fireball is extremely hot, which rises rapidly in the air, creating a vacuum that is then rapidly filled by the surrounding air, forming a mushroom cloud in the process.

If you’ve ever looked up pictures of nuclear explosions on the Internet, you have likely observed something rather intriguing about them: regardless of the type of explosion or where they occur, all of them appear to form a ‘mushroom cloud’ in the sky. 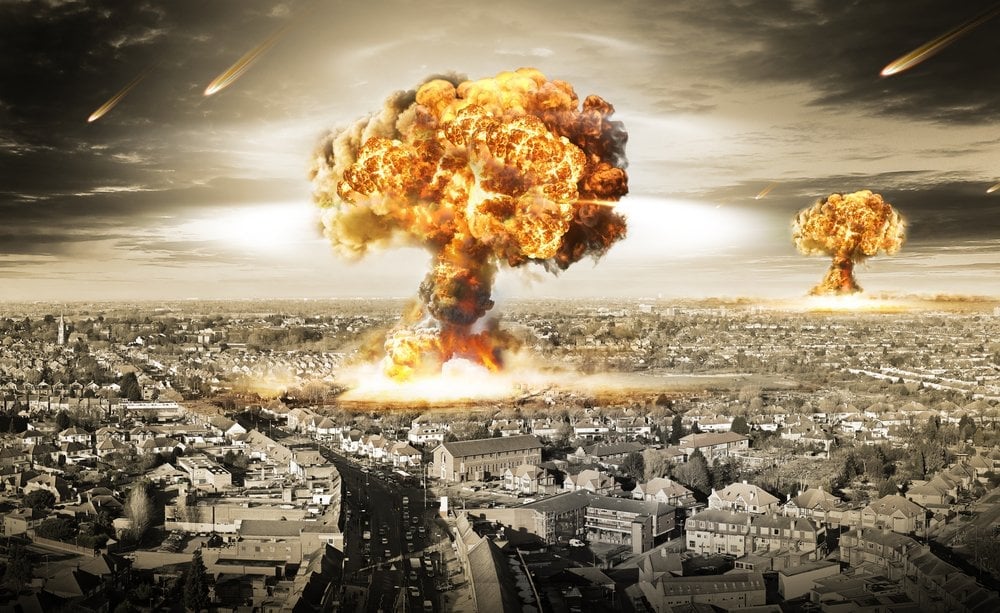 A mushroom cloud is an iconic mushroom-shaped cloud of smoke/debris that forms in the sky following an extremely large explosion. Although it’s usually associated with a nuclear explosion, a mushroom cloud can be formed following any event that results in a rapid release of heat, like a volcano, a forest fire, an impact event (a large-scale collision between astronomical objects) or a particularly powerful explosion (like those caused by vacuum bombs). 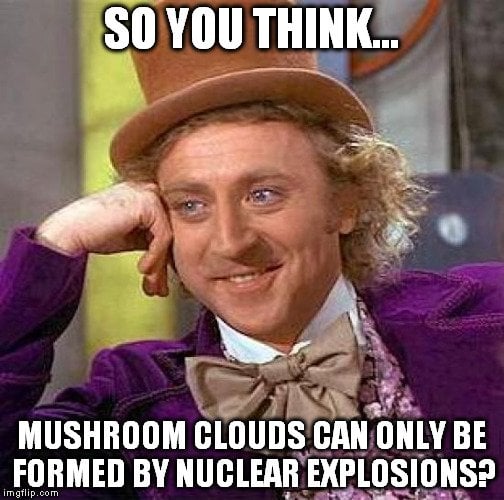 Why do nuclear explosions cause mushroom clouds?

A particularly powerful explosion is accompanied by a sudden release of a great deal of heat. This heat interacts with the surrounding air, making it hotter and less dense, resulting in what’s known as Rayleigh–Taylor instability in scientific circles. Simply put, it says that when two fluids of different densities (and thus subject to different accelerations) interact, the lighter fluid pushes on the denser fluid.

Apart from the mushroom cloud itself, the suspension of water atop oil, volcanic eruptions, jet streams of winds that regulate Earth’s climate, and supernovae explosions are some instances where Rayleigh-Taylor instability comes into play. 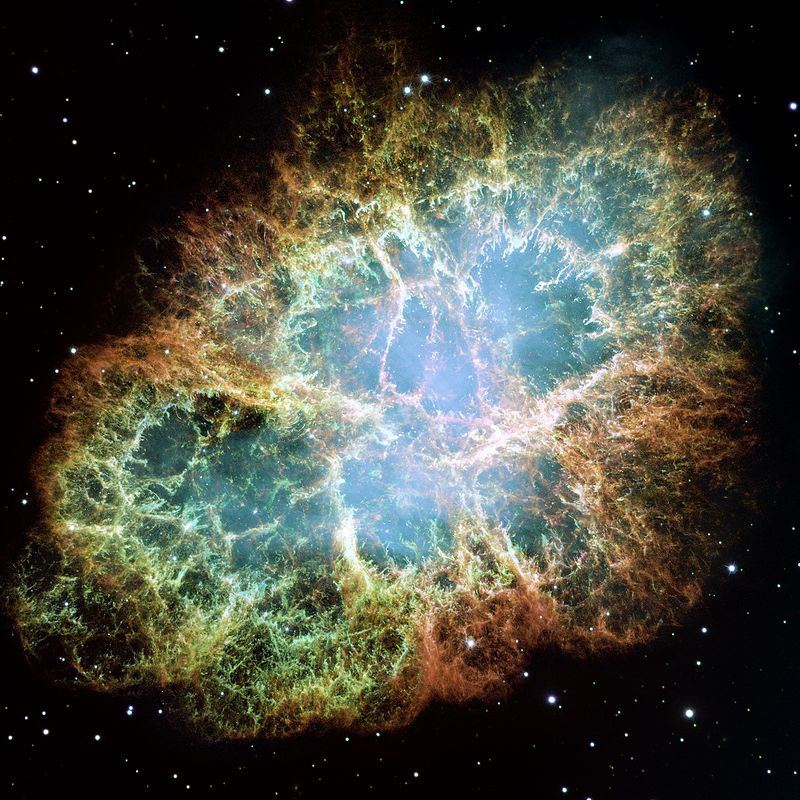 An example of RT instability in the Crab Nebula, a supernova remnant and pulsar wind nebula in the constellation of Taurus (Image Source: Wikimedia Commons)

As mentioned earlier, the sudden release of energy following an explosion heats up the surrounding air which then starts to expand. The giant fireball created in the initial stages of the explosion is incredibly hot, with temperatures running up to millions of degrees of Celsius, which is akin to what you could expect to find in the middle of the Sun!

Now, the hot air within the fireball rises rapidly in the air, creating a vacuum that is then rapidly filled by the surrounding air, which also expands and starts to rise. This process continues for quite some time, during which the fireball continues to quickly rise through the sky.

As the fireball continues to rise, it experiences resistance from the air on top of it, which pushes it down sideways. This leads to the flattening of the top of the cloud, which then appears like the cap of a mushroom. The displaced gas, which is at a lower temperature than the air in the center of the column, trickles down the sides of the column, only to get sucked back in by the rising column to travel upwards again. 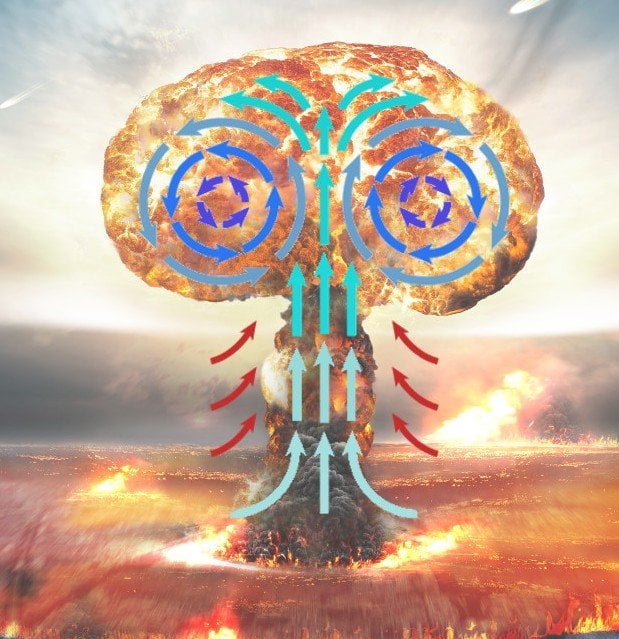 This is the reason why the edges of an explosion’s fireball appear to be curling constantly. Since a nuclear explosion occurs at a much larger scale than regular explosions, the fireball it creates is proportionally gigantic.

End of the fireball’s journey 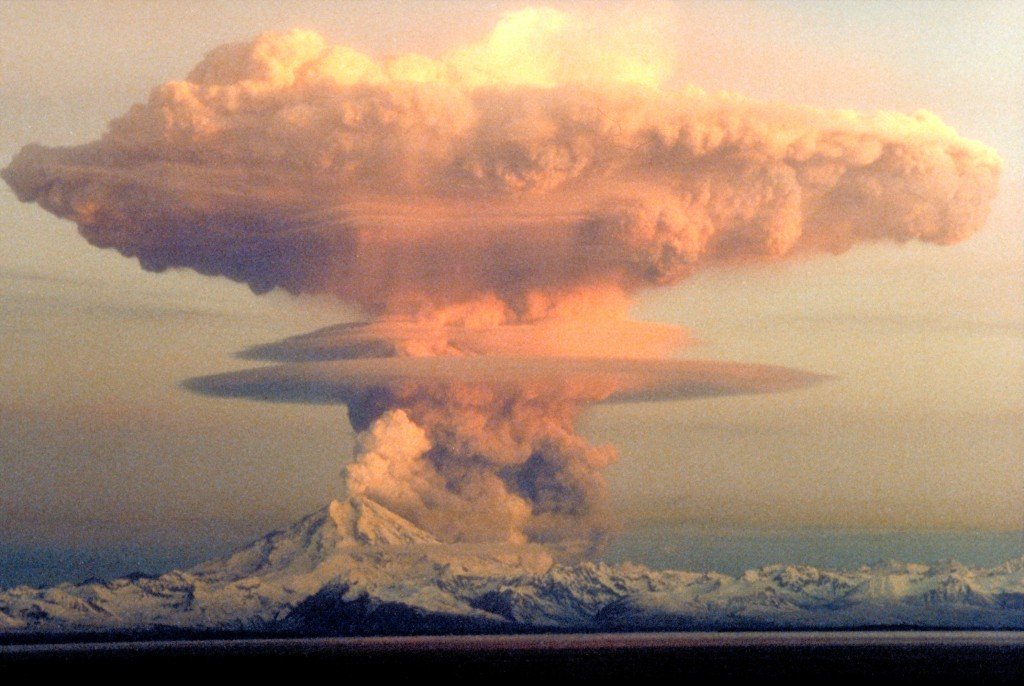 The mushroom cloud created by the eruption of Redoubt Volcano on April 21, 1990. Note that the rising air stops abruptly and spreads out horizontally after attaining a particular altitude (Photo Credit : Wikipedia.org)

How big is a nuclear mushroom cloud?

Mushroom clouds formed as a result of nuclear explosions can go thousands of meters in the sky, easily surpassing the height of Mt. Everest – the tallest mountain peak in the world.

The nuclear explosion that occurred in Hiroshima, Japan in 1945 exploded with an energy of 15 kilotons. 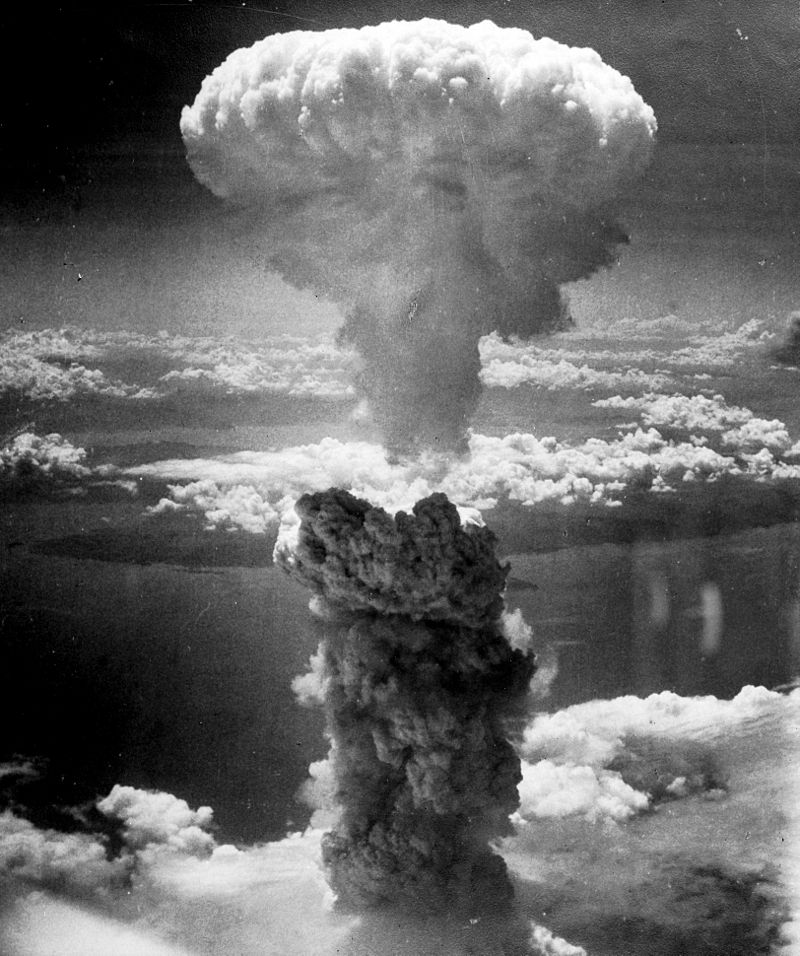 What are the biggest nuclear bomb explosions of all time?

These are the 3 most powerful man-made explosions in the history of mankind (in descending order of their strength):

A comparison of some of the biggest nuclear explosions till date

As you can see, a sudden, rapid and concentrated release of heat in a relatively cool surrounding is all it takes to form a mushroom cloud in the sky. So, the next time you see an image of a mushroom cloud, don’t jump to the ‘it must be nuclear way’ conclusion; it might just be a powerful volcanic eruption or a raging forest inferno. Neither of those options are ideal either, but it’s better than a sign that the nuclear apocalypse has begun!