Home
Humans
Why Do Some People Sweat More Than Others?

While working out in the gym, you’ve probably observed that although both you and your friend started jogging on the treadmill at the same time, your friend is completely soaked in sweat, whereas you’ve just started to warm up (a ‘vice versa’ scenario is also quite likely).

Why does that happen? Why do some people sweat so much more than others? Well, before we get to that, let’s first try to understand why we sweat in the first place.

Why do we sweat at all? Sweating is a very important physiological process of the human body, as it helps to regulate body temperature. When the ambient temperature is high, the moisture present on the body evaporates, which cools us off a bit. We tend to sweat frequently, such as while exercising or in stressful situations, namely when we feel threatened or anxious. Sweating is brought about by tiny sweat glands present on the skin all over the body. Humans typically have around 2-4 million sweat glands at the time of their birth. Although women’s skin consists of more sweat glands than men, men still tend to sweat more than women, as their sweat glands are more active, on average.

Human sweat consists of 99% water and 1% salt and fat. We sweat roughly 1 liter per day. However, there can be a lot of variation in this quantity depending on a number of factors.

As mentioned earlier, men sweat more than women, despite the latter having more sweat glands. Therefore, if you are a male, your comparison with the rate at which females sweat is baseless. You’ve likely observed that the more you exert yourself during a workout session, the more you sweat. The more intensely you engage in any physical activity, the sweatier you are going to get. This is actually the most obvious of them all – the amount of ambient heat directly and most obviously impacts the amount of sweating for anyone. If you’re in a hotter setting than your pal, then you will end up more drenched in sweat than them.

While taking an examination, where you know the answers to all the questions, sweat-wise, you would be perfectly normal. However, one of your friends, who did not study as thoroughly, may be drenched in sweat. Why does that happen? 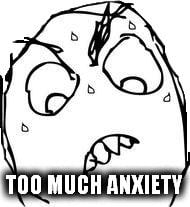 The more anxious, scared or worried you are, the more sweaty you shall be!

It has been observed that fat/obese people sweat more frequently than their fitter counterparts, because excess body fat acts as an insulator that increases the core body temperature, making one feel hotter and more inclined to sweat.

If all the above conditions don’t apply to you, i.e. the ambient temperature is cool, you feel perfectly calm, you are not working out, but rather just sitting in your comfy chair, listening to music, and yet you’re still sweating a lot, then it’s quite likely that you are suffering from a common condition of excessive perspiration called hyperhidrosis.

This condition is generally observed in overweight/obese people with relatively sedentary lifestyles. However, it can be treated with proper medication and certain lifestyle changes, such as cutting down on drinking alcoholic beverages, quitting smoking and reducing your caffeine consumption, and obviously… Physical exercise, as stated by virtually everyone with a brain in their head or a doctorate to their name, is helpful in many ways. One benefit of exercise is that it makes you feel less awkward in social settings… at least from a ‘sweaty’ standpoint!

The short URL of the present article is: http://sciabc.us/K9sJJ
Help us make this article better
Prev Article Next Article