Aristotle suggested in 350 BC that nature abhors a vacuum, meaning that space is not empty. This was later proved by Evangelista Torricelli in the 1600s, who discovered that atmospheric pressure decreases as you move away from Earth’s surface. Sir Issac Newton then laid down his theory of Universal Gravitation in 1687, which explained that gravity pulls the atmosphere towards Earth’s surface. Thus, at a certain height above Earth, gravity stops acting on bodies and they drift away into space. This is why there is no oxygen in space.

Now, before we take this trip down memory lane and discover who helped us figure out there’s no oxygen in space, think back to the times you may have gone out on a mountain hike. Fun, right? Waking up early in the morning, packing food and accessories for the hike, and the scenic ride to the base. Think of all that fresh air you are able to enjoy.

However, once you’ve reached the top, you noticed others finding it a bit difficult to breathe. The next thing you know, you start having difficulty breathing too!

As you may have guessed, the difficulty you had in breathing atop a mountain has a lot to do with the discovery of oxygen’s absence in space?

It was as far back as 350 BC when the theory of space being void of oxygen was first suggested. Greek astronomer Aristotle suggested that nature abhors a vacuum—a theory that later became known as horror vacui. Although Atomism led to the rejection of this suggestion, it wasn’t until the 1600s that the theory of no oxygen being present in space could be proved using scientific evidence.

Have you ever heard of a barometer? It is an instrument used to measure air pressure. The barometer was created by an Italian physicist named Evangelista Torricelli, who was actually the pupil of the great Galileo Galilei. Galileo had been performing many different experiments on air. He knew that air had weight and some force that resisted the formation of a vacuum. One year after Galileo’s death, Torricelli successfully completed the experiment and created an apparatus that could produce a partial vacuum!

Torricelli’s drawing of his Barometer

After performing many more studies, around 1644, Torricelli concluded that air or atmosphere exerts pressure because it’s being pulled or pushed down by something to the Earth’s surface. His exact words read, “We live submerged at the bottom of an ocean of the element air, which by unquestioned experiments is known to have weight.” 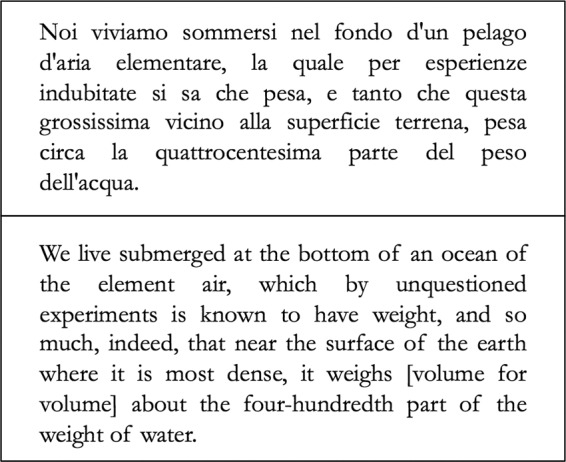 An extract from the letter Torricelli sent to Ricci on his discoveries of the Atmosphere.

A German scientist named Otto von Guericke in 1650 constructed the first vacuum pump. He demonstrated that the force developed by air was so significant that two teams of horses were unable to pull the two hemispheres of the vacuum pump apart. Otto also noted that the atmosphere of the Earth surrounds the planet like a shell, with the density gradually declining with greater altitude. He concluded that there must be a vacuum a certain distance away from Earth’s surface.

Also Read: Why Don’t We Get Crushed By Atmospheric Pressure? 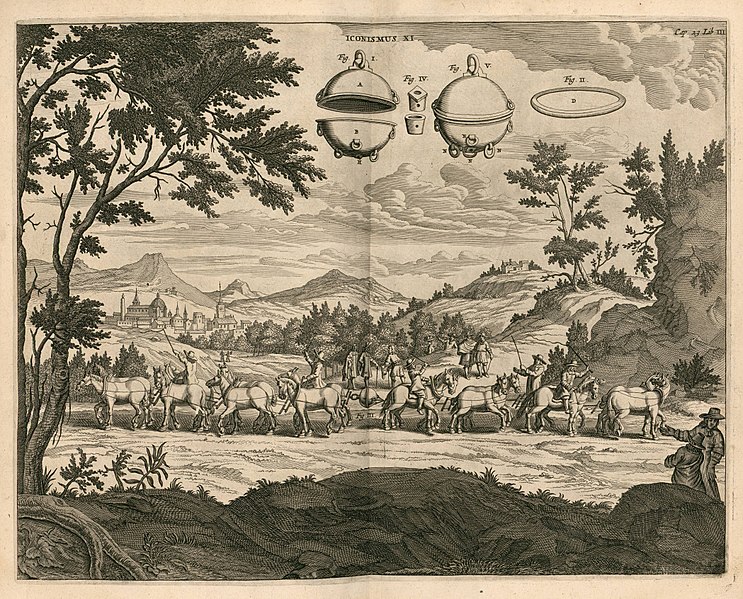 A demonstration of the experiment conducted by Otto von Guericke on the first vacuum pumps he constructed. (Photo credit: Gaspar Schott/wikimedia commons)

In 1687, one of the most influential scientists in history, Sir Issac Newton, laid down his theory of Universal Gravitation in The Mathematical Principles of Natural Philosophy.

Thank God for that apple! Otherwise, we might have never come to know about Gravity. If you aren’t yet aware, the reason we humans stay grounded on Earth is gravity. If there were no gravity, we would all just be floating around. Not only that, but gravity plays an important role in many other natural phenomena aside from keeping us on Earth’s surface.

Why Is There No Oxygen In Space?

This is exactly what happens with oxygen. Oxygen is concentrated in the lower areas of the atmosphere and becomes more scarce as we go higher. That’s why mountaineers and trekkers have difficulty breathing at the summit, as there is very little oxygen present there. The air gets thinner the higher we go.

After a point where gravity is no longer acting forcefully, the air molecules (oxygen) are no longer attracted to Earth. Thus, the molecules are further away from each other, often so far apart, in fact, that we say that there is “No Air present” or label it a “Vacuum”. 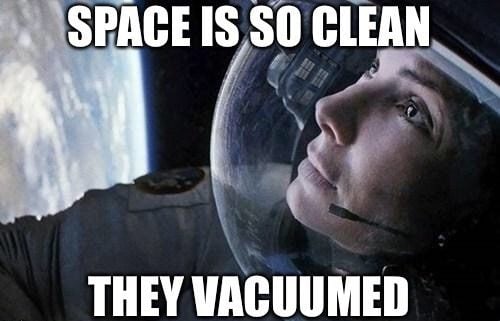 This is how scientists, physicists, and astronomers came to this realization about there not being any oxygen in space—logical reasoning and some basic experiments.

Of course, it wasn’t quite as simple for them to discover this as it was for us to talk our way through the issue. Many great minds were involved and extensive experiments had to be performed before this conclusion could be reached.

Between the 1600s and 1800s, many theories and laws were articulated regarding the behavior of air with respect to pressure, temperature, molecules, etc. Some of these laws include Boyle’s Law, Charles’s Law, Avogadro’s Law, the Ideal Gas Law and many more. All the laws and theories played a huge role in the discovery of space’s empty nature.

For example, the experiments conducted on hot air balloons by the Montgolfier brothers helped concluded that air (and thus oxygen) keeps decreasing as we move away from the Earth’s surface. There’s nothing better than reaching excellent scientific conclusions while enjoying a great view!