In space, there is a thing called microgravity, which is a very weak gravitational force. Every object that has mass generates gravity, and gravity causes every object to pull every other object towards it. However, as you travel further away from an object in space, the force decreases. This is why things in space don’t bump into each other.

If you take any two objects, let’s say a shoe and a ball, and release them from a certain height, what will happen? No, this is not a trick question. They will both fall to the ground. Now, you might think that was a dumb question, but be patient. Instead of being on Earth, imaging doing the same thing in space… what will be the outcome? The two objects will float, right? Can you think of a reason for that?

If you answered that on Earth the objects fall due to gravity, but in space they don’t because there is no gravity, then I’m afraid your answer is far from the truth. Every nook and cranny of the universe is filled with myths and mysteries, and the absence of gravity in space is no exception. It is true that space is a partial vacuum devoid of what we commonly call “atmosphere”, but the belief that it is also devoid of forces is a fallacy. In the absence of gravity, how can celestial bodies have defined orbits? 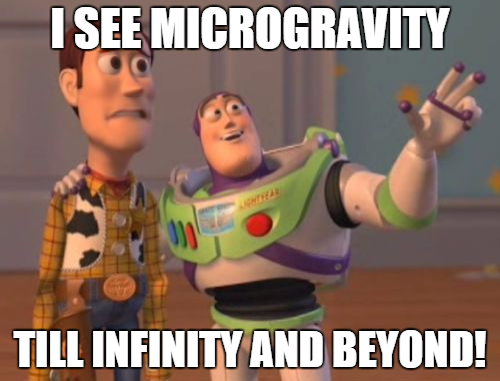 In space, gravitational forces do exist. Space has microgravity which is very weak gravitational force. Any object that has mass generates gravity, and gravity causes every object to pull every other object towards it. Space contains massive objects that exert a gravitational force on everything around them. For example, the gravitational pull exerted by the Sun on the entire solar system is what keeps them in orbit, just as Earth’s gravity keeps the moon in orbit. However, as you travel further away from an object in space, the force decreases. This can be explained by Newton’s Universal Law of Gravitation, which states that the G-force between two objects is directly proportional to the combined mass of the objects and inversely proportional to the squared distance between the objects.

Hence, as we move away from the Earth and further into space, the distance increases so the force decreases.

However, if objects in space attract each other, such as the earth and the moon, then how do they not crash into each other? Also, microgravity does not explain astronauts floating in space.

Well, the reason that celestial bodies and our international space station do not suddenly fall out of the sky is because all objects are actually falling. In the case of planets and moons, they have momentum that drives them horizontally, but the gravitational pull is what gives them their curved orbits. Similarly, in the case of an individual astronaut in space or an international space station, they are falling AROUND Earth. What that means is that the space station, all its equipment and astronauts are constantly falling towards Earth.

However, don’t worry, because the space station is also traveling at a speed of 28 thousand km/hr, which roughly matches the way the Earth’s surface curves. When you throw a ball, it does not fall immediately to the ground, right? It follows a trajectory that gradually slopes towards the ground.

Similarly, the space station keeps falling towards the ground, but as it reaches close, the Earth curves beneath it. The ISS falls in a curved path, and the Earth’s surface is curved too, so the former never actually reaches the latter. Also, in space, heavy objects and light objects will fall at equal speeds, irrespective of their mass. Therefore, an astronaut and a spacecraft would both fall at the same speed. This falling without huge amounts of gravity make the astronauts feel weightless and appear to us as though they are floating around.

Isn’t our universe full of surprises? And all this time you thought that science wasn’t magic!