When you blow up a balloon on Earth, the air pushed into the balloon is at a higher pressure than the air that surrounds it (1 atm) This greater pressure is what “inflates” the balloon in the first place. In space, there is no external air pressure pushing back on every surface of the balloon.

Whether you are a veteran astronomer or a child looking up at the stars, outer space holds a fascination for everyone who gazes into the void. This intriguing vacuum also inspires people to wonder what happens out there. For example, what would happen if a nuclear bomb went off in space? How long could you survive without a spacesuit? And, perhaps most importantly, what would happen if you popped a balloon in space?

Well, maybe that last one doesn’t intrigue everyone, but enough people enjoy physics (or at least the loud destruction of balloons) for this article to intrigue a few of you… so what would happen to a balloon popping out there in the cosmic darkness? 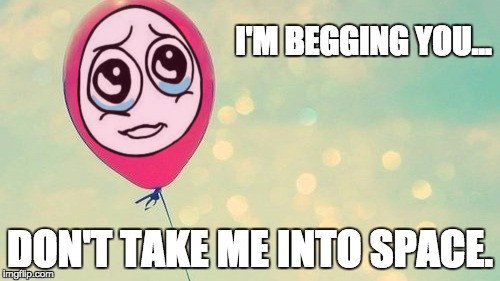 Short answer: Due to the lack of external air pressure, the balloon would continue to expand and almost instantly pop all on its own!

Air Pressure in a Vacuum

The interesting thing about this question isn’t what would happen if you popped a balloon in space, but whether you would even be the one to do the “popping”. When you blow up a balloon on Earth, the air pushed into the balloon is at a higher pressure than the air that surrounds it (1 atm). This greater pressure is what “inflates” the balloon in the first place. As more atmospheric air is pushed into a restricted place, the number of collisions between air molecules will increase, thus creating more pressure, and pushing the walls of the balloon outwards.

On Earth, when you blow up a balloon past a certain point, it will pop because the molecules of the latex have limited elasticity, and will eventually succumb to the pressure of the air inside. That is the moment when the balloon blows up in your face and pops loud enough to wake up the neighbors.

However, in space, there is no external air pressure (1 atm) pushing back on every surface of the balloon, so when a person blows air into the balloon itself, that air has nothing hold it in except the rubber walls. The air molecules in this space balloon would expand at an extremely rapid rate, quickly pushing the rubber walls past their elasticity limits, causing the balloon to explode.

In fact, as soon as you took an inflated balloon from the pressurized cabin (of a spaceship, one would imagine), it would take less than one second for the pressurized air inside the balloon to expand (having no resistance) and explode. The air molecules inside the balloon would be moving at roughly the speed of sound, or slightly faster. Once the balloon explodes, those molecules would move at a slightly lower velocity and continue into the vacuum of space until they bump into another molecule that slows or diverts its path.

The rubber shards of the balloon would similarly fly away in a straight line from the point of explosion, in the opposite direction of the first break in the rubber. As mentioned above, the question isn’t whether you can pop a balloon in space; it’s whether you would have a chance to before air pressure and physics did the job for you!

What About the Satisfying Pop?

Most people poke pins into balloons for that satisfying “POP”, either to wake up a napping child at a birthday party or simply scare the heck out of the chaperones at a school dance. However, in space, would you still get that rewarding bang when the air molecules rushed outwards to the edges of space?

Unfortunately, no. There would be no popping sound in this space-balloon experiment, as sound waves require a medium to move through. That medium is usually air or water (at least on Earth), and neither of these are present in outer space.

When you look at a balloon on Earth, it seems rather harmless and calm. However, the air molecules inside are desperate to get out. In fact, when you stick a pin in the balloon, the air molecules expand at the speed of sound, or even faster! When this air blows past our ears, it is in the form of a pressure wave that our ears perceive as a bang, just like the terrifying bang when a jet blows through the sound barrier above your head! In space, the air molecules would still expand outward, but without any air in a vacuum, there is no “sound barrier” to break, per se, so it would be a completely silent pop. 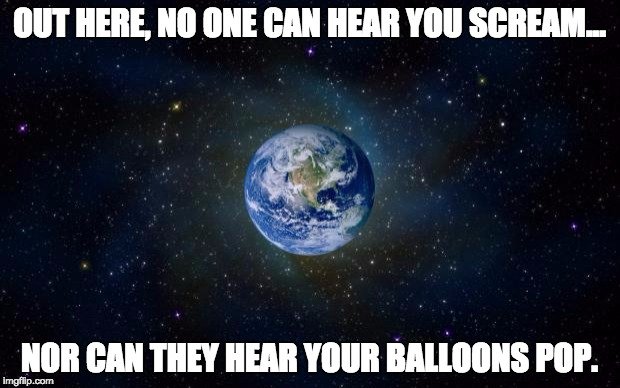 There are a lot of logistics to traveling into space, blowing up a balloon in an airlock, and then going for a spacewalk to see what happens. Fortunately, you have us to do the heavy lifting (or theorizing) for you!