The brilliant yellow shine of gold, surprisingly, is the consequence of Einstein’s theory of special relativity and the dual nature of electrons.

For millennia, mankind has been hypnotized by the brilliance of metal. Wars were fought, continents were invaded, and expeditions were led into dense dangerous jungles, all for the possession of the eternal metal—gold. On a seemingly unrelated note, the theory of special relativity tells us that nothing can travel faster than the speed of light.

So wait, what does the theory of relativity have to do with gold?

Well, the theory of relativity isn’t just for physicists and astronomers to ponder over, but also a theory for us to admire. We might not realize this, but it affects us very close to home. The lustrous yellow color of gold that has blinded mankind with gleaming greed is also a consequence of Einstein’s theory of special relativity.

Before we discover what makes gold golden, we first need to understand what makes it glitter.

Why Are Metals Shiny?

The simple answer would be “because the light bounces off the surface”, but that’s not actually the case for metals. In there case, it has to do with some very tiny particles dancing to the rhythm of light.

We are well aware that metals are known for being great conductors of heat and electricity. Those qualities are made possible by loosely bound electrons that move freely around the positively charged nucleus. When many metal atoms come together to form metals, it creates a negatively charged puddle of electrons that can flow around freely. Scientists refer to this as the “sea of electrons”. 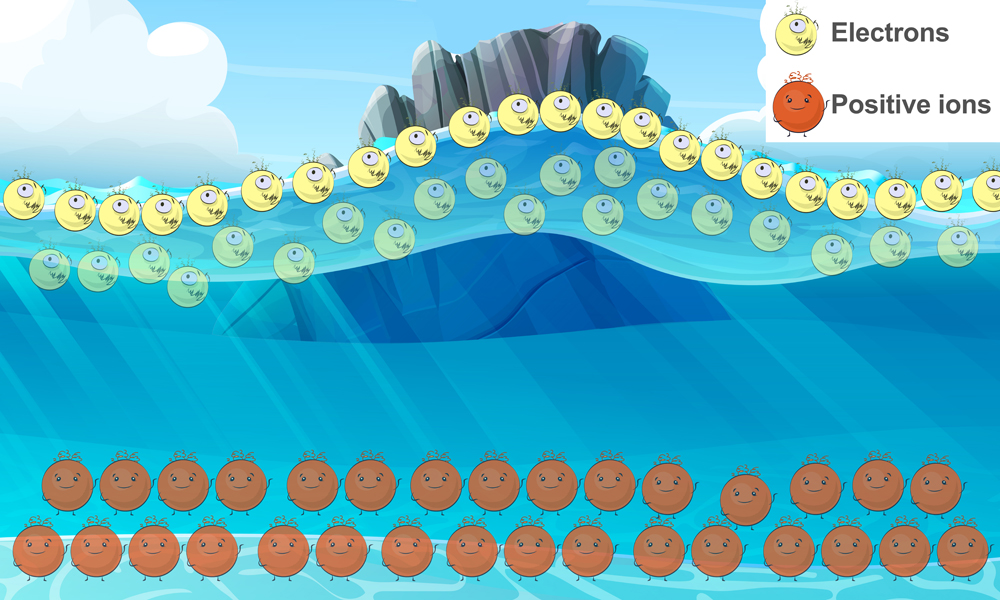 Light, which is an electromagnetic wave (and a form of energy), travels with an entourage—the electric and magnetic field (EM field). When it hits any metal, the EM fields create a ripple in the sea of electrons. The electrons absorb the energy from the light and vibrate at the same frequency of light they have absorbed. For most metals, the energy they absorb corresponds to the ultraviolet region of EM waves.

When electrically charged particles interact with each other, they give rise to a field. In this case, the negatively charged pool of electrons moving as a result of the incoming light generate an electric field. To keep the total electric field of the metal zero, the electrons generate a second wave of light (if they didn’t, we would get a tiny shock every time we touched a shiny metal). 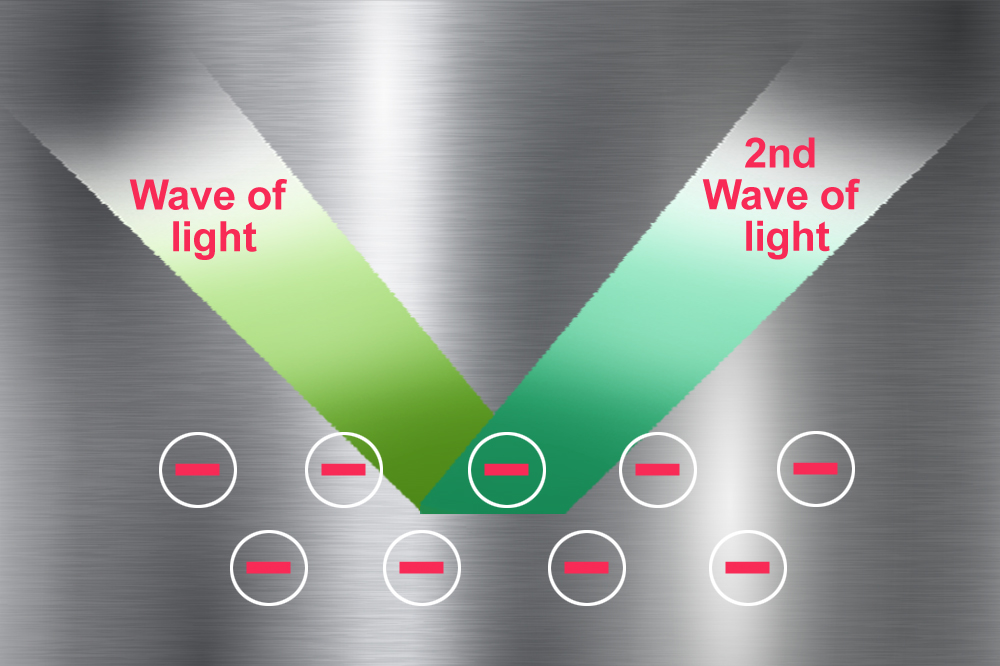 Second wave of light reflected by the sea of electrons.

This second wave of light coming off the metal reaches our eyes and makes the metal appear shiny. The light reflected off the metal is a mixture of wavelengths of all the colors in the visible region (though not in equal proportions). This is what gives most metals their almost white, but greyish shine… except for our beloved gold (as well as copper and cesium). 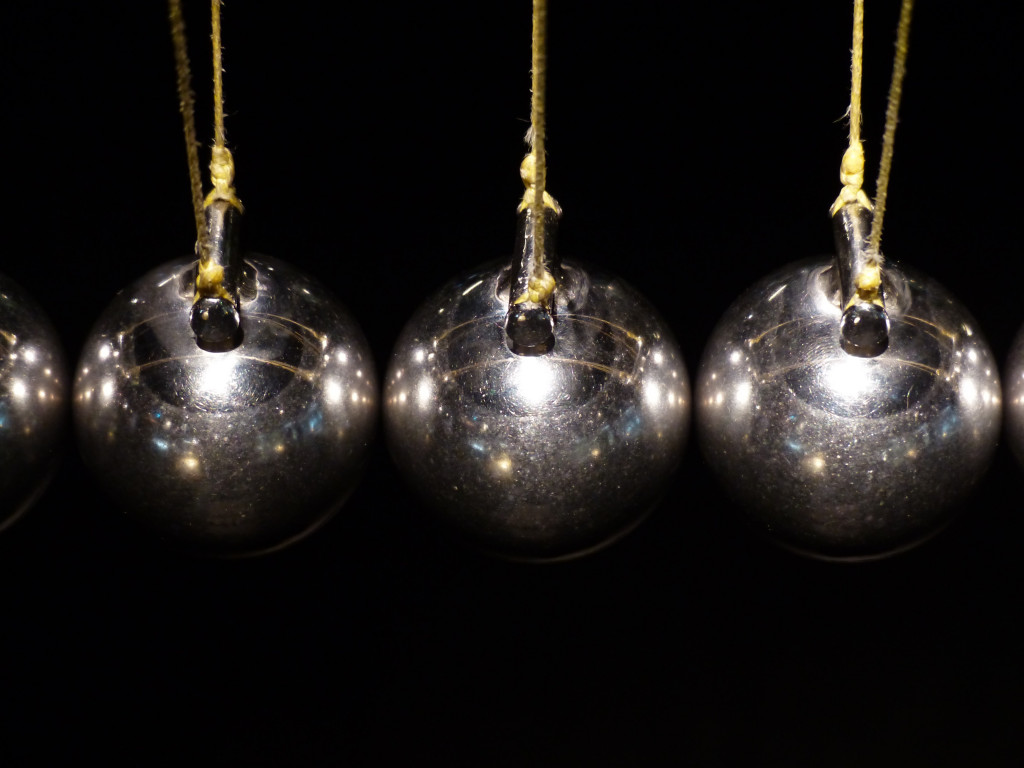 Einstein’s Relativity And The Gold Atom

Gold is the 79th element of the periodic table and bears the symbol Au. Gold’s nucleus is made up of 79 neutrons and 79 protons, making it very heavy and dense. Hence, the effective nuclear charge or the actual positive charge experienced by the electrons (also 79) is subsequently high. To avoid crashing into the nucleus due to electrostatic attraction, the negatively charged electrons must work extra hard. 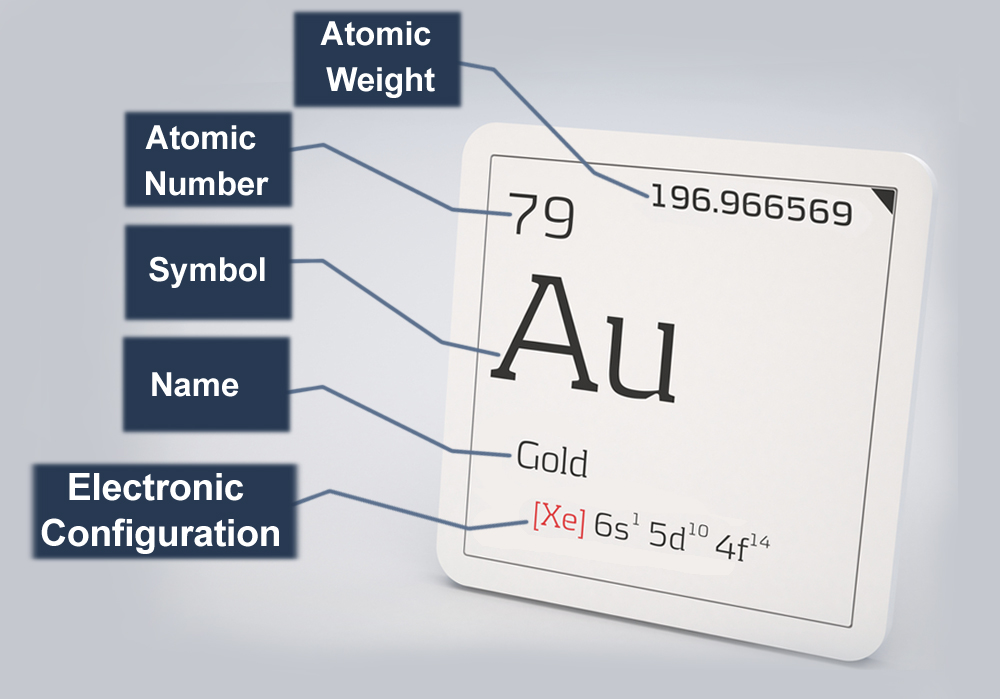 According to Bohr’s Model of an atom, electrons move around the nucleus in orbits. They maintain certain amounts of kinetic energy to avoid getting pulled into the nucleus, similar to what would happen if you tied a stone to a thread and rotated it at a certain speed. It would maintain a distance from the center, but the moment you stop doing that, the stone would spiral into the center or “fall”.

The electrons around the nucleus of gold revolve around at 1.6 x 10 8 m/s (nearly half the speed of light). This is where the relativistic effect kicks in. According to the theory of special relativity (E=mc2), when the velocity of any particle approaches the speed of light, it starts gaining mass. As a result, the mass of electrons of gold increases by ~20%.

This increase in mass shrinks down the path that the electrons need to travel around the nucleus. This “path” is also known as the Bohr radius, which is given by the formula:

Also Read: What Is The Photoelectric Effect?

In the formula, we see that the a­­­­0 (Bohr radius) and me­ (mass of an electron) are inversely proportional. If one increases, the other decreases. The decrease in the Bohr radius and the increase in the mass of the electrons due to the relativistic contraction is the reason that gold shines yellow to our eyes.

However, a quick peek at the periodic table will tell you that there is a plot hole in this story. There are many other metals, such as mercury and lead, which are heavier than gold, but still have a silvery shine.

To explain this apparently contradictory situation, we need the savior of every sci-fi movie plot hole… Quantum Mechanics!

With the emergence of quantum mechanics, scientists’ perspective towards the “color of gold” changed.

According to the quantum model, electrons are quantum particles that show both wave and particle natures, and exist in a cloud of probability. This electron cloud or atomic orbital gives us information about the probability of finding an electron in a particular region in space. For example, if an electron were on a bike, Bohr’s model would constrict the route to one street, whereas the quantum model would let it ride anywhere in a particular zip code.

Now, coming to the relativity part… the effect is similar, as we see relativistic contraction here as well. Atoms have orbitals s,p, d, and f, all of which have different shapes. The s orbital is known to have a spherical shape. The electrons in the spherical s orbital experience the greatest pull from the positive nucleus. 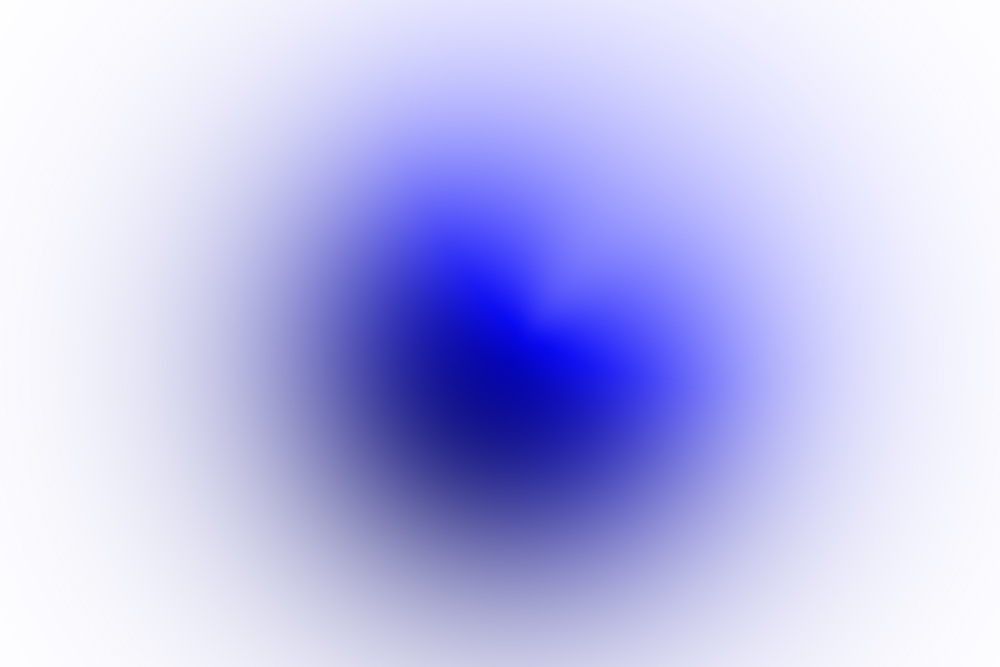 As a result, all the s orbitals in a gold atom get pulled slightly closer to the nucleus. The outermost orbital of gold, which is 6s, contracts by ~17%.

As established earlier, when light falls on gold, the sea of electrons absorb that energy. The gold atoms absorb the precise amount of energy needed to jump from the lower energy 5d orbital to the higher energy 6s orbital. Since 5d and 6s are closer, due to relativistic contraction, the electrons absorb less energy for such transitions than usual.

The energy absorbed by gold atoms belongs to the blue-violet region of the visible spectrum (instead of the ultraviolet region). The second wave reflected by the metal consists of all the other colors in the visible spectrum, except for blues and violets. The visible wavelengths of light that reach our eyes belong to the red-green region, and when these are combined, they give us Yellow!

The effect of E=mc2 on gold doesn’t just end with its dazzle. It also prevents gold from reacting with environmental factors, keeping it impeccable for all eternity. The ability of gold to let in visible light and reflect UV and Infrared rays has made it an integral part of designing spacesuits (for example, the visors). It is also critical in satellite components due to its great electrical conductivity and immunity towards corrosion by UV and X-rays.

Also Read: If Light Has No Mass, Why Is It Affected By Black Holes?

So, the next time someone says “The theory of special relativity doesn’t affect everyday life”, just remind them that it keeps our jewelry shiny and our GPS systems working. 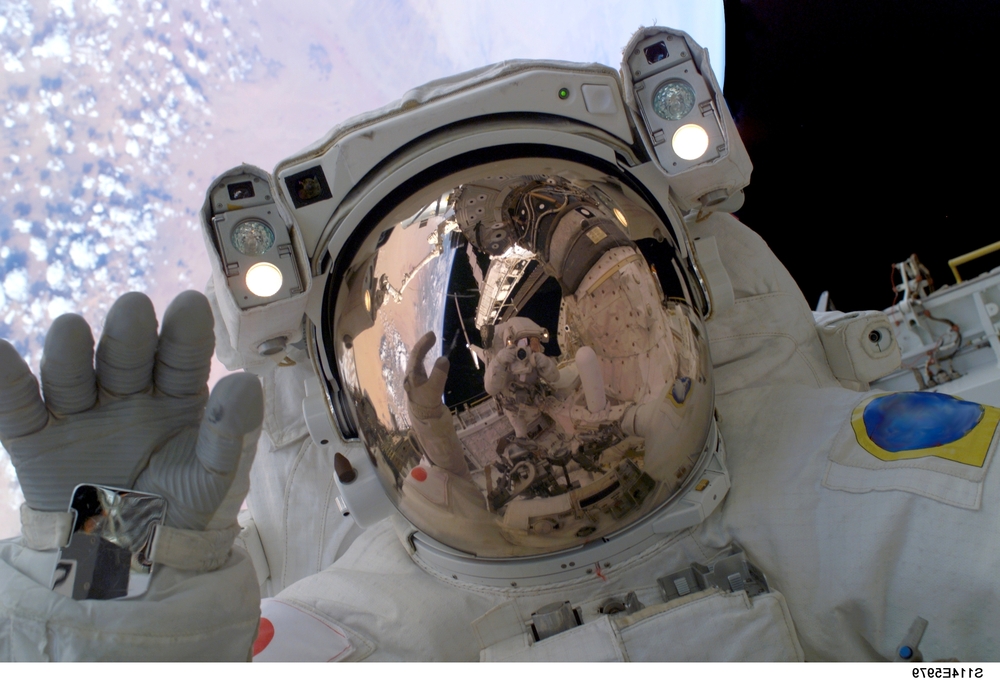 A thin layer  of gold is coated on astronauts’ visors (Photo Credit : MGS/Shutterstock)