For those of us who have done a bit of homework on space, and have a basic understanding of the properties of light and gravity, we may feel like have a lot of the answers. These two things have a huge impact on the known universe, as well as our conception of it.

However, the interaction of these two fundamental aspects of space gets a bit confusing.

We have heard adages like nothing can escape the gravitational pull of a black hole, and we often think of black holes as cosmic vacuum cleaners that can suck up entire galaxies and anything else that has mass. We also think of light as being composed of massless photons, and as the fastest-moving thing in the universe – moving at roughly 300,000 km/second.

So, if light has no mass, then what effect do black holes have on it? The Movement of Light: Einstein’s Theory of Relativity

One of the most important discoveries of the 20th century, and one of Einstein’s key foundations of his theory of relativity, is that light moves at “the speed of light” – roughly 300,000 km/s. The interesting thing is that this is a universal constant, meaning that light cannot move faster or slower than that speed, and that every observer, regardless of the velocity at which they’re moving, or the velocity at which the source of light is moving, will also measure a beam of light moving at the exact same speed.

Having a constant like the speed of light, which didn’t change based on point of view, like other observable phenomena and geometry in the universe, made it very valuable. Einstein used it in his theory of special relativity as an accepted postulate, and it helped establish his ideas about the geometry of space-time, and how time flows based on gravitational and velocity-related factors. Perhaps most important to this discussion, Einstein posited an opposing view to Newton’s traditional definition of gravity. Instead of Newton’s definition of gravity as the attractive force between two objects that both possess mass, Einstein proposed that large objects in the universe have the ability to distort space-time. In other words, when considering the constant velocity trajectory of a thrown baseball, followed by its gently arcing down to the ground, Einstein didn’t believe that represented the “pull” of gravity. 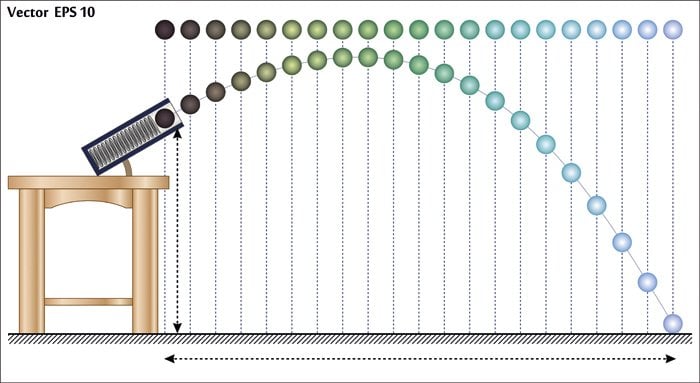 He said that by distorting the geometry of space-time between two objects, that new trajectory was actually a constantly dynamic “straight line”. Surprisingly enough, we see the same thing happen to light, which has no mass. When light passes by black holes, as it shifts in that straight line of space-time, it doesn’t speed up its acceleration, which things with mass would do, because light has a universally constant velocity. However, the frequency of the light is changed by this space-time geometry distortion, which affects the color of light that we can observe. This phenomenon is known as the gravitational red-shift or blue-shift effect. The color that is emitted versus the color that is observed will be affected by a shift of the light within the visible spectrum, either closer to blue (shorter wavelength) or red (longer wavelength).

Now, we have been talking about light and its colors being affected by gravity wells and passing near black holes, but what about the main event? People say that black holes have such powerful gravitation that not even light can escape it, but that seems contrary to everything we’ve just learned. Light can’t change its velocity, so how could it ever be “contained” or “captured” by a black hole?

Well, black holes are unique phenomena in the universe because they have what’s called an event horizon. Beyond that point, matter is unable to escape from the black hole’s “pull”. Given what we know about blue and red light shifts, coupled with the distortion of space-time near large material bodies, we begin to understand what happens to light. The closer that light is to the event horizon, the more the distortion of space-time causes light to bend. Why does light (photons) feel the effects of gravity when it has no mass?

What this means is that gravity doesn’t directly bend light (by influencing the motion of photons); it’s just that the spacetime around a massive object (a black hole) is warped and light takes the shortest path (which is a little curved), making it look like the black hole is affecting the motion of light. (Source) At the event horizon, the spacetime is curved into itself. The upshot of this phenomenon is that light cannot escape the black hole.

How much do you know about black holes?