At one point in time, physics was a pretty straightforward subject. Then, Einstein came into the picture and wrecked havoc on everything we thought we knew about the universe.

Einstein’s theories deal with things that cannot possibly be studied in a laboratory. So, instead of laboratory experiments, Einstein used his incredible imagination to carry out complex thought experiments. Through them, he came to remarkable conclusions. He showed us how to travel in time, how to calculate atoms, how to change things into light and light into things and how, if you look hard enough up into the sky, you just might be able to see the back of your head. Needless to say, Einstein’s contributions to the scientific world were immeasurably important.

The following discussion concerns just a small part of Einstein’s work. By the end of it, you will finally understand how time actually moves slower in a moving vehicle! Strap in, it’s a wild ride.

The Concept of Relativity

Relativity is actually pretty easy to understand. It states that the only sort of motion in the universe is relative motion. What that means is that you can never really determine whether or not you are moving, or at what speed you are going, This is because everything in the universe is moving in relation to everything else.

Let me give you an example.

When someone tells you, “this car is moving at a speed of 10 m/s”, you automatically assume that the speed quoted above is in relation to the ground. However, an annoying scientist could come up in the middle of the conversation and change your perception by stating that the ground is also moving at the speed of 30,000 m/s compared to the Sun. Hell, the scientist can even suggest that the car is stationary, from the perspective of the fluffy dice hanging inside the car.

All of the above statements are true for the same car. It is all a matter of perspective. It is somewhat like asking, “Am I taller than you or are you shorter than me?”

If that is true, then we can confidently assume that there is no such thing as absolute motion.

The Principle Of Relativity

Although the theory of relativity was postulated by Einstein, the principle of relativity has been kicking around various scientific circles for a very long time. The principle is a just a way of saying that ‘the laws of nature are the same whether you are standing still or moving steadily along in a straight line’. But that seems pretty obvious, doesn’t it?

(Note: This is valid only for an object moving smoothly in a straight line. If your vehicle is moving haphazardly or screeches to a halt, you would be moving within the vehicle in a very different way.)

However, Einstein had one particular thought experiment that called this Principle into question.

Imagine if you are in a spaceship that is moving at the speed of light. What would happen if you were to turn around and look at the back of the ship?

AHA! Now that there is a clear way to determine whether you are moving or not, does that mean Einstein proved the Principle to be wrong?

Obviously not. As I mentioned earlier, that’s not how light works! The speed of light remains constant, no matter how fast you are going – always at 300 million meters per second. Therefore, if you are in a theoretical spaceship traveling at the speed of light, the back of the ship would still be illuminated, because light will ignore the speed of the spaceship altogether.

This realization got Einstein thinking. If light’s speed remains constant, then maybe it is inextricably linked with something else that also moves along at a constant rate – Time. One way that Einstein explored this idea was through another thought experiment.

Imagine that you have a very special clock. It consists of two mirrors facing each other, and a beam of light entrapped in the middle of the apparatus. The ray of light would naturally bounce between the two mirrors at a constant pace. Each time that it bounces, that can be considered as one tick. This tick will be now used as a standard of measurement. For example, if your mirrors are 30 cm apart, then you know that it would take 200 thousand million ticks for an egg to get boiled.

There you go! A pretty nifty little clock, right?

Now that the apparatus is set, we can move on to the next part of the thought experiment. For this, you would need help from your imaginary friend Trevor.

Trevor really likes this clock and decides to steal it from you and escape in his spaceship. He chooses to commit this crime in complete darkness. It is so dark that when you follow the movement of the spaceship as it flies away, you can see nothing but the beam of light moving within the clock. Before the ship takes off, the light ray appears to be bouncing back and forth in a vertical axis.

Now, Trevor’s ship starts accelerating. To you, the beam, which was bouncing at the same spot before, now begins to move in a zigzag path. The faster he moves, the longer the length of one tick seems.

Remember that the vertical distance of the light ray remains the same, but the horizontal distance increases with the speed. 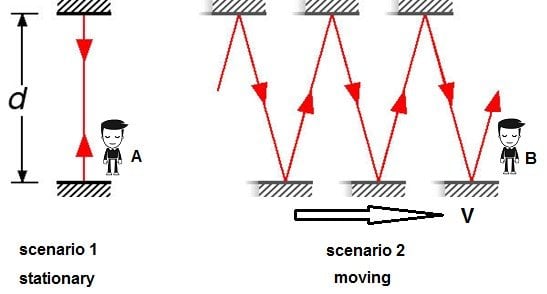 Now, with the longer distance, does that mean that the faster Trevor’s ship moves, the faster the beam of light also becomes? But that’s impossible, right? The speed of light is always constant!

That leaves us with only one conclusion. If the beam of light has to go farther than before and it cannot speed up, that means that it must take longer for it to complete a tick.

In other words, the clock slows down.

Not just the clock, mind you. Everything in the ship must slow down. Even the minds of the people in the vehicle would have to reduce their movement through time!

For Trevor, the light is still bouncing at the same spot, so for him, time is functioning exactly the same way. That means that if the vehicle were to travel near the speed of light, Trevor would not notice any changes at all! Only someone outside will be able to detect the slowing down of time in the vehicle.

This was just the beginning of the journey that Einstein was about to embark upon. He went on to discover far more about time than any other scientist ever had! Because of him, the world came one step closer to understanding the curious thing that is Time.