The electron cloud is a cloud of probability surrounding the nucleus in an atom where one has the highest probability of finding an electron.

When you think of an atom, your mind probably conjures up an image of a central nucleus with a whole bunch of electrons revolving around it. That is the image we’ve seen in countless sci-fi shows, comic books and movies. That’s the image of an atom that we’ve had reinforced in our brains all our lives. Even the comic book hero Atom decided to represent himself using this classical image of the atom. 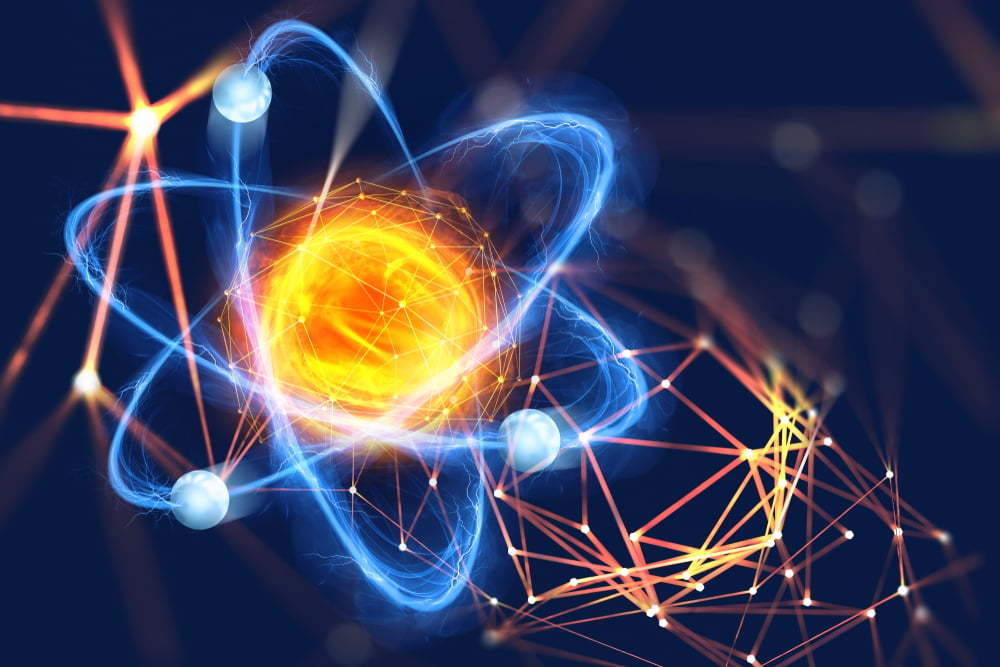 An atom is popularly illustrated as a bunch of electrons revolving around a central nucleus  (Photo Credit : Yurchanka Siarhei/Shutterstock)

However, as continued research into the matter has made the scientific community realize, that’s not actually how an atom looks. Confused? Trust me, initially, I was too. I always assumed an electron to be a perfectly round, tiny sphere circling around a dense nucleus. As it turns out, that representation does little justice to the true image of an atom.

The atom has a central nucleus consisting of protons and neutrons. Surrounding it is a “fog of probability” where an electron has the highest chances of being found. The denser the area, the greater the chance of finding an electron. This dense fog of probability is called the electron cloud. 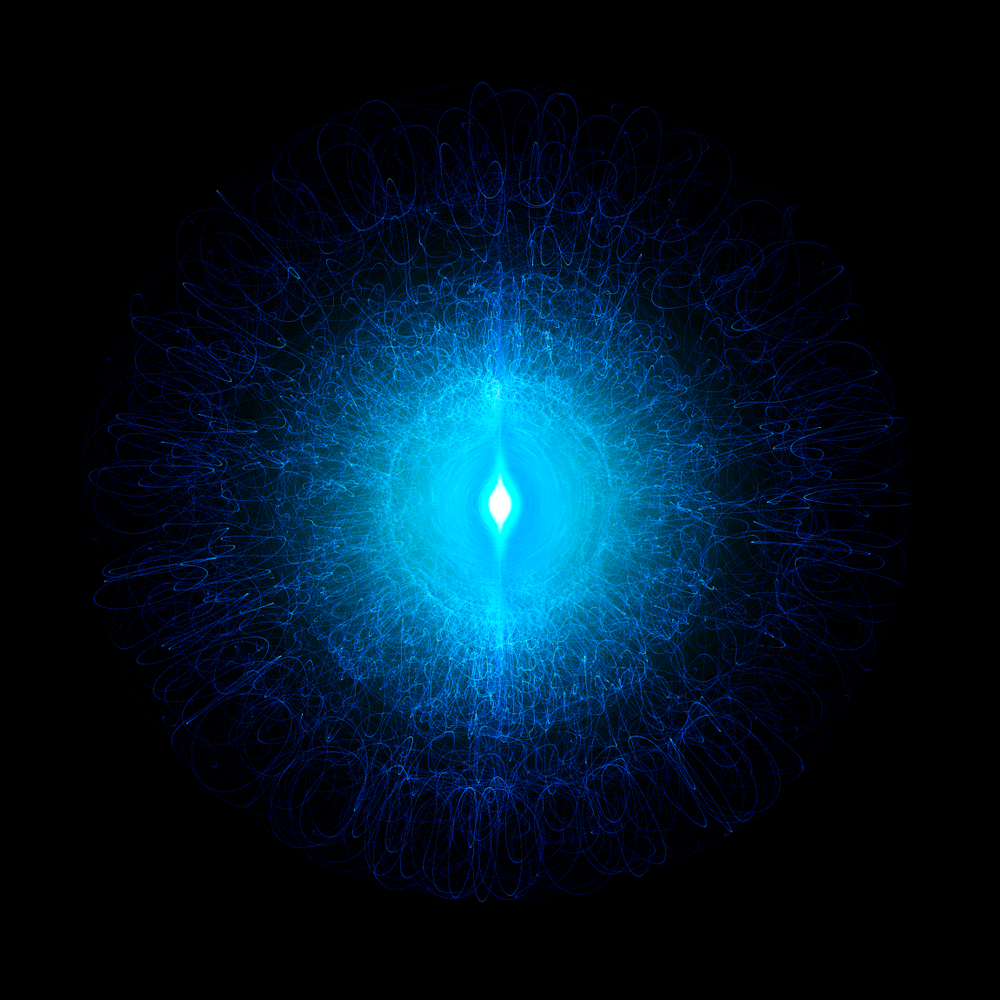 The region around the nucleus where an electron is most likely to be found is called the electron cloud  (Photo Credit : dani3315/Shutterstock)

Those with a curious inclination (like myself) probably aren’t happy with such a simplistic explanation. I want to go further down the foggy path of the electron cloud, but let’s start from our very earliest understanding of electrons inside an atom and progress onward from there.

The Plum Pudding Model Of The Atom

By the year 1910, scientists had discovered two major constituents of the atom, positively charged protons and negatively charged electrons (the neutron was discovered much later in 1932 by James Chadwick). However, the jury was still out on how these particles were organized within the atom. One of the first explanations was given by J. J. Thompson, who stated that electrons and protons are evenly spread out within an atom, in a form somewhat resembling ‘plum pudding’. 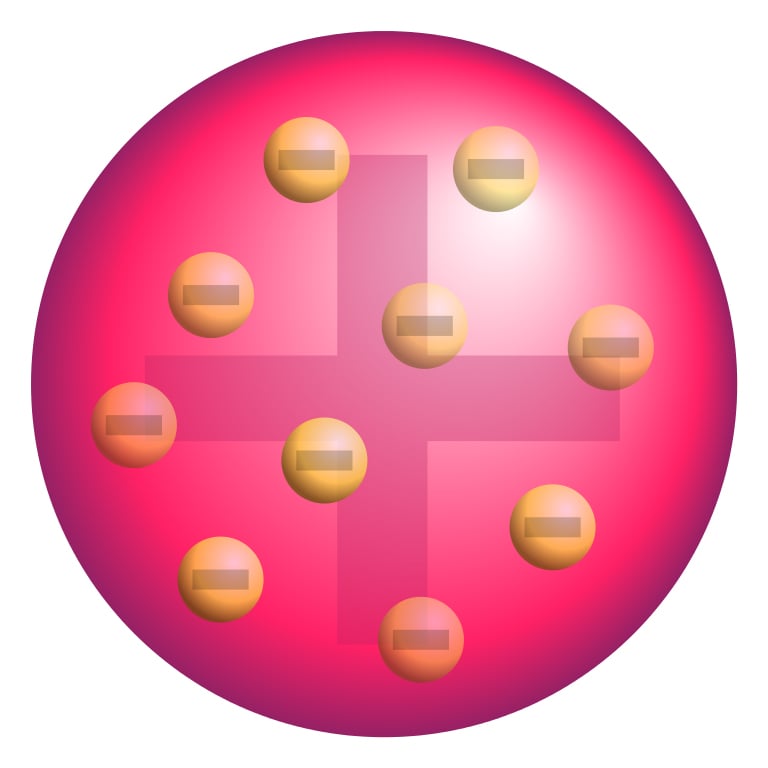 In the plum pudding model, electrons and protons were assumed to be uniformly distributed within the atom  (Photo Credit : public domain/Wikimedia Commons)

Rutherford’s Model Of The Atom

To test Thompson’s hypothesis, Ernest Rutherford conducted his world-famous gold foil experiment, in which he bombarded a piece of gold foil with alpha particles. 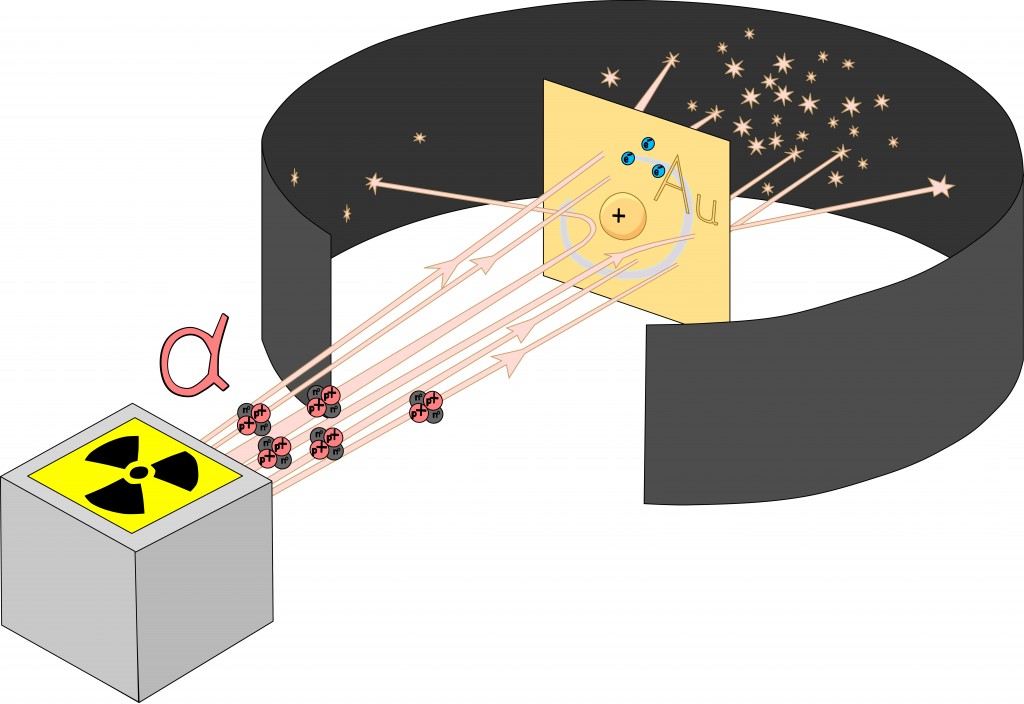 If the plum pudding model were indeed accurate, there would be little to no deflection of alpha particles. However, Rutherford observed that while some alpha particles did pass right through, uninterrupted, a few were rebounded back to their point of origin. This inconsistency led Rutherford to propose a new model of the atom. The areas where the particles passed through uninterrupted seemed to be largely empty, while the points at which they were deflected or rebounded seemed to hold a high concentration of the atom’s overall mass. Thus, he discarded the plum pudding model in favor of the classical atomic model that we see in popular media—a central nucleus surrounded by electrons. 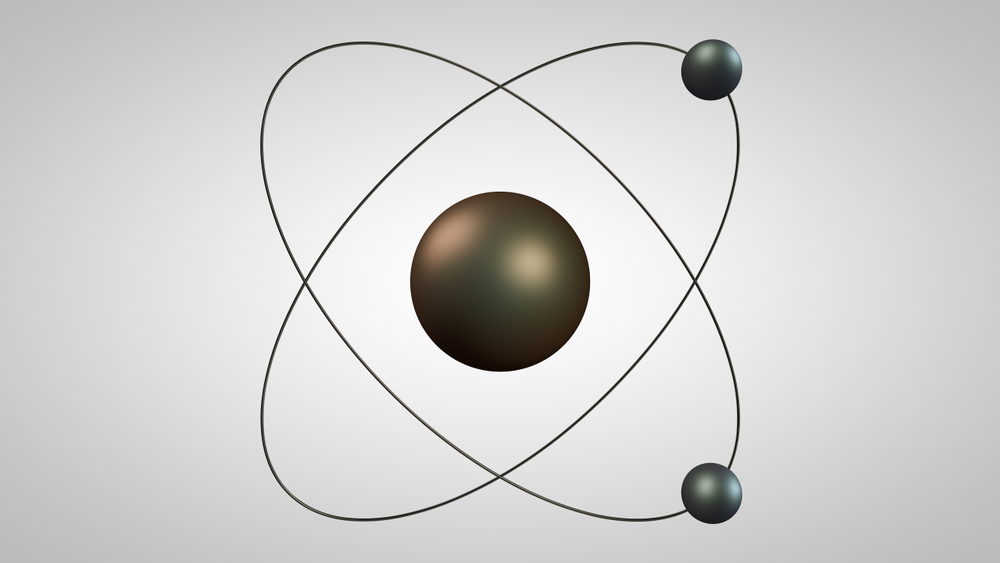 Bohr’s Model Of The Atom

While Rutherford’s model gained widespread acceptance, one of his students, Neils Bohr, further refined the model. He proved that electrons surrounding the atom do not revolve arbitrarily. Rather, they revolve in well-defined orbitals at very specific energy levels, i.e., the orbitals are quantized. Through this proof, Bohr’s model of the atom was able to explain certain phenomenon, such as the hydrogen spectrum. However, that’s a whole other discussion. 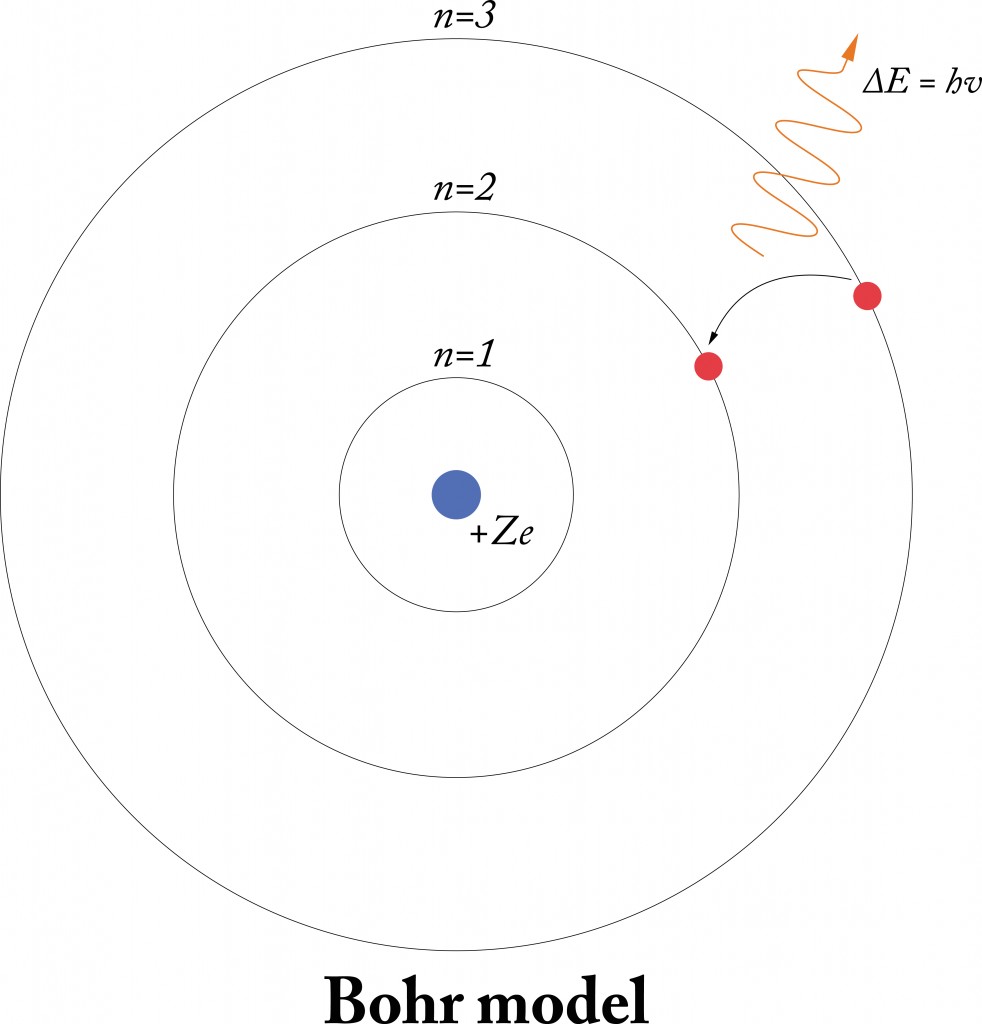 Each of these models explained most of the mysteries that baffled the scientific community for decades. Bohr’s quantized orbital model was so intuitive that it seemed perfect. However, as quantum mechanics revealed, the model was far from reality. All previous models of the atom assumed the electron to be a particle with a well-defined mass revolving around the nucleus like a planetary system. In reality, however, the electron is more like a dense cloud of probability surrounding the nucleus. 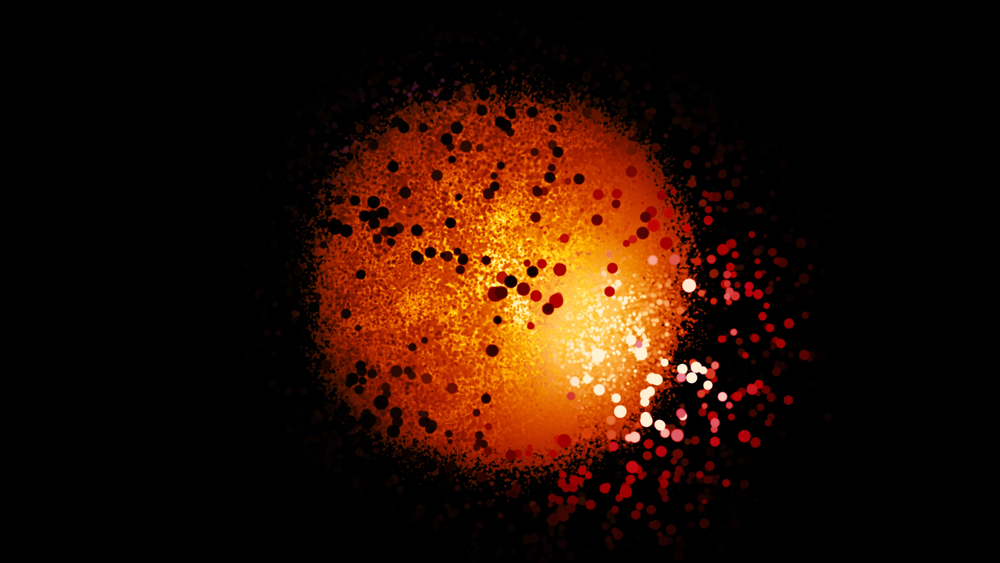 A nucleus surrounded by an electron cloud of probability (Photo Credit : Media Whalestock/Shutterstock)

The electron has measurable kinetic energy and momentum, but it does not exhibit any semblance of revolution. The electron simply surrounds the nucleus of the atom like a dense fog. However, let’s get one thing clear—the electron is not an elusive particle that we can seek out in the fog. It’s not a target that’s moving so fast that it looks like a blurry cloud. In fact, the electron is the cloud.

Does An Electron Cloud Have Mass?

We’ve established that an electron isn’t a perfect sphere revolving around the nucleus, but rather a dense cloudy region of probability. So, how can we ascertain its mass? Does an electron cloud even have mass? Science textbooks everywhere confidently illustrate in big bold fonts that an electron has a mass of 9.11 X 10-31  kg. This is true.

Things get a bit foggier from here. Let’s say that you have a tiny spoon. You take that spoon and dip it into 25% of the electron cloud area. Does your spoon then contain a weight equal to 25% of 9.11 X 10-31  kg? No. When your spoon holds 25% of the electron cloud, your spoon possesses a 25% chance of containing the electron mass of 9.11 X 10-31  kg. You can either possess the whole electron or none of it. Despite it being represented by a cloud, it cannot be broken down into partials, as the cloud isn’t physical. A cloud is merely the best way to illustrate the true state of an electron.

Also Read: Protons And Electrons Have Opposite Charges, So Why Don’t They Pull On Each Other?

Of course, this has been a very simplified explanation of an electron cloud. The complex world of quantum mechanics mathematically represents the electron cloud as a quantum wave function governed by probabilities. However, such mathematics seems outside the purview of this piece. My objective here was merely to help you visualize the “electron” for what it truly is.

So, the next time someone asks you to think of an atom, don’t conjure up that outdated, inaccurate image of electrons revolving around a central nucleus. Think of the electron cloud instead!