Valence electrons are those electrons that reside in the outermost shell surrounding an atomic nucleus. Valence electrons are of crucial importance because they lend deep insight into an element’s chemical properties: whether it is electronegative or electropositive in nature, or they indicate the bond order of a chemical compound – the number of bonds that can be formed between two atoms.

Since covalent bonds are formed through the sharing of electrons in the final shell, the number indicates how many bonds may be formed.

What Are Valence Electrons?

Where Are Valence Electrons?

Irrespective of the type of chemical bond between atoms, be it an ionic, covalent or metallic bond, changes in the atomic structure are limited to the electrons in the outermost shell, i.e. valence electrons. 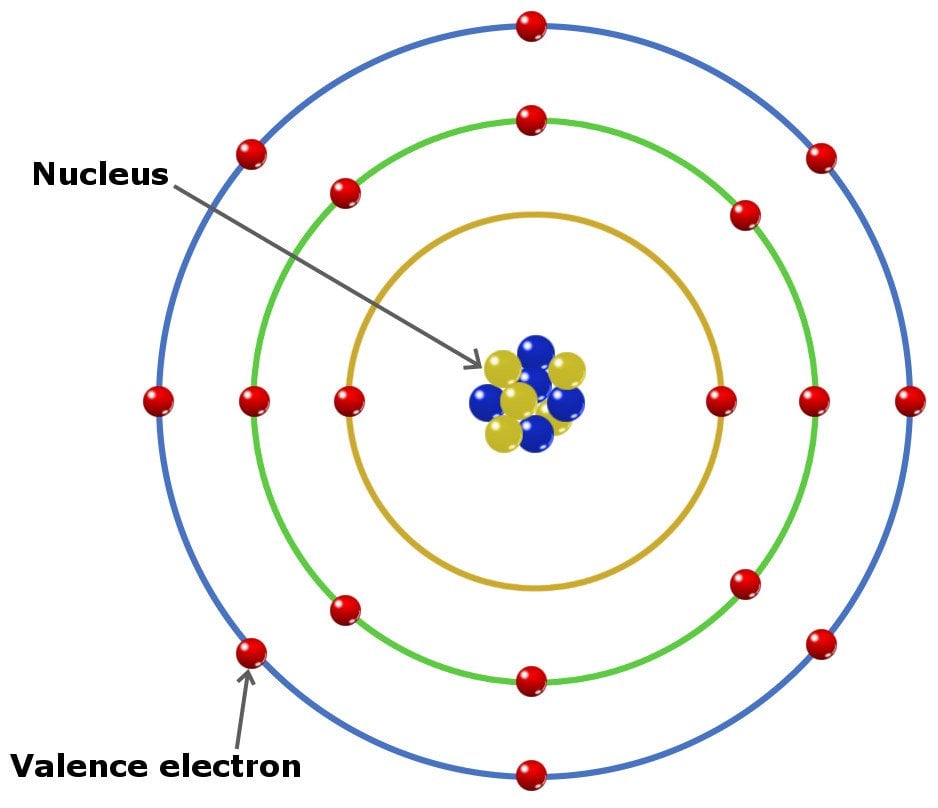 The most basic method would be to refer to the atomic configuration of an element and simply count the electrons in the outermost shell. However, this would be an extremely laborious task, as we may have to dig through textbooks to find configurations we do not know.

However, there’s no need to fret, as there’s a much simpler manner of determining this coveted number. This is a more generalized approach that only requires summoning one small resplendent rectangular sheet of paper — the periodic table.

In order to determine the number of valence electrons of an element, we only have to refer to the periodic table and search for the position of the element in it.

Valence Electrons And The Periodic Table

The periodic table is a clean arrangement of all elements discovered so far. The elements are arranged from left to right in ascending order of their atomic numbers or the number of protons or electrons they contain. 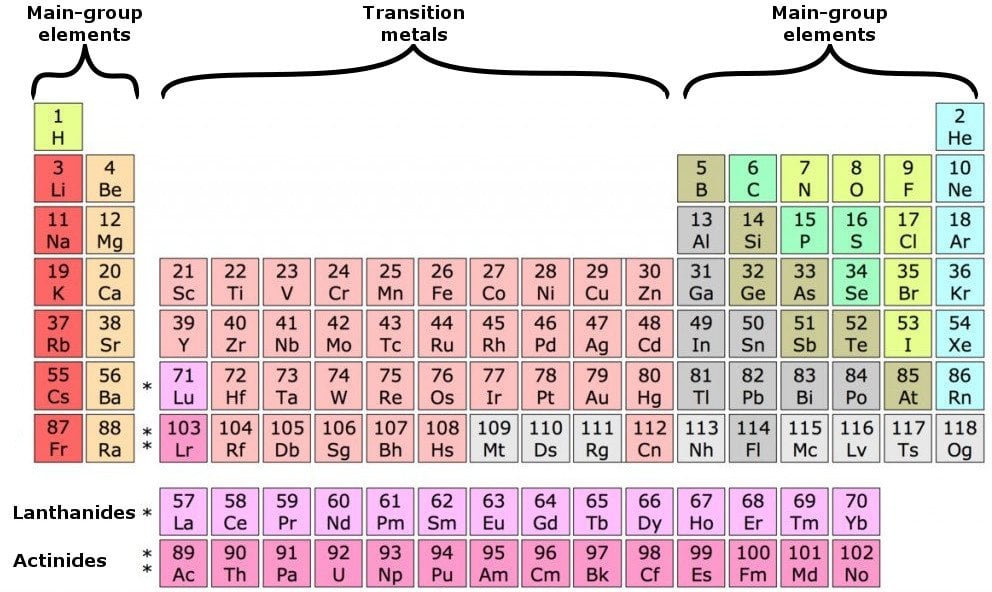 How To Find Valence Electrons?

So, what is the significance of the group number?

The rule is inapplicable to the transition and inner transition elements (we’ll get to that reason in a minute). For instance, Sodium (Na) resides in Period 3, Group 1, which implies that it has 3 shells and a single electron in its valence shell.

Or, you can consider chlorine in Group 17. Accordingly, in order to determine its valence electrons, we must only seek the number in its ones’ place: 7. As expected, that is exactly the number of electrons in its valence shell. 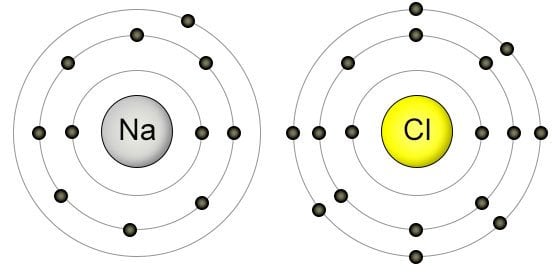 This method of simply referring to the periodic table and determining the corresponding group number has eliminated the hassle and complexity that once accompanied the arduous search for individual atomic configurations.

What about the valence electrons of the elements in between? Of course we must not forget the lanthanides and actinides…

A Quick Explanation Of How Shells Are Filled With Electrons

Transition elements are not much different from metals that go shoulder to shoulder in the main group elements. They appear much like metals: they are malleable, ductile and can conduct both heat and electricity. The fact that the best two conductors—Copper (Cu) and Aluminum (Al)—are transition metals shows the extent to which their properties overlap.

However, they do not duplicate the results we derived from the above method. We cannot count their valence electrons simply by referring to their group number.

To understand this exception, we need to understand how electrons occupy shells in any element.

First, however, we must unlearn the high school method of filling shells around an atomic nucleus: remember 2..8..8..18 and so on? Well, there’s a reason why we distribute electrons in this particular fashion.

The solar system analogy, which describes the ordering of electrons around an atom, is completely wrong. It should be eliminated immediately, but because it alleviates the difficulties associated with the presentation of the actual model, the high school textbooks rely primarily on this rudimentary explanation.

Now, the next sentence might sound hypocritical, but quantum numbers can be thought of as our good ol’ shells, but with sub-shells now, which are technically known as orbitals (s,p,d,f). Regardless of this oversimplification, it fares quite well for a crash course such as this one.

There’s a rule that restricts the number of electrons that a sub-shell can accommodate: s-2, p-6, d-10 and f-14. If this wasn’t enough, adding to the delirium, the shells can only be filled in a specific order given below. Let’s call it the rule.

The electrons only have to be filled from left to right in exactly this order.

If we were to distribute electrons unconsciously with respect to how the sub-shells are lined up, as shown in the figure above, Calcium (Ca) with atomic number 20 would have the configuration 2,8,10 (2, 2+6, 2+6+2). Any high school chemistry textbook will tell you that this isn’t correct, as the precise configuration is 2,8,8,2.

However, because we must abide by the rule, we observe that 4s must be filled before 3d, such that there are now 8 in the 3rd shell and 2 in the 4th making the configuration: 2,8,8,2. Voila! As Richard Feynman would cheerfully exclaim: The pleasure of finding things out! Sadly, the joy is only half-lived — the reason for the rule itself, this apparent absurdity, is beyond the scope of this article.

Okay, now that we know how shells are filled, we can go further to find the number of valence electrons in the transition elements.

Consider Scandium (Sc) with its atomic number of 21. Filling the electrons according to our rule, we observe that the 21st electron occupies the 3d sub-shell. However, as the previously filled 4th shell (4s) has 2 electrons and is apparently the outermost shell, the number of valence electrons is 2.

Similarly, every transition element in the 4th period must have 2 valence electrons. The reason being that even though 3d gets filled ahead of 4s, the two electrons situated in the 4th shell are the inhabitants of the outermost shell and rightfully deserve the designation of valence electrons.

In fact, this is true for transition elements in every period. Consider Gold (Au), located in the 6th period (row) and the 11th group (column). In the process of fillings its shells, one can realize that the stuffing of 5d is followed by the stuffing of 6s. And because the 6th shell resides above the 5th, the number of valence electrons is… *drumroll*… 2!

However, this is how electrons would ideally line up. The energy differences between these shells are minuscule and electrons (or Nature, for that matter) covets stability more than anything else. An electron would happily make a leap to an adjacent shell of relatively equivalent energy to attain a more stable configuration.

A good example is the fickle configuration of a Copper (Cu) atom.

Copper has 29 electrons, so the rearmost electrons are lined up as …4s2-3d9. For Copper, the configuration is a little unsettling — a more stable configuration would be to have 10 electrons in the 3d shell, and this is exactly what we observe!

Since the energies of the shells are comparable, an electron of 4s makes a jump to 3d to fulfill a stable configuration. The number of valence electrons is now 1! 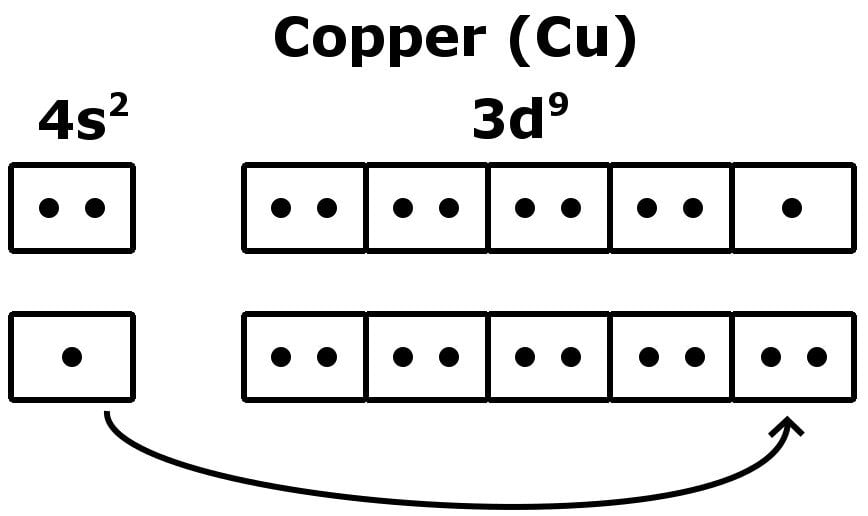 Also Read: Why Are Atoms With 8 Valence Electrons So Stable?

The capricious behavior of their valence electrons, endlessly trembling and hopping in indecision, denies any attempt to obtain a unique stable configuration – making predicting the number of valence electrons almost impossible!

How much do you know about valence electrons?