Atoms with 8 electrons in their valence shell have completely filled last orbitals and are therefore the most stable, as their electronic configuration is similar to that of the closest noble gas.

The number 8 is a lucky number, according to many Asian cultures. The Chinese consider the number lucky because its pronunciation bā is similar to fā, meaning wealth. Interestingly, the Beijing Summer Olympics took place on August 8th, 2008 at 8 seconds and 8 minutes past 8 pm.

The Japanese consider it a lucky number regarding the idea of prosperity, as the script for 8 in Japanese is 八, which broadens gradually, implying growing wealth.

The Significance of “8” in Chemistry

In chemistry, 8 isn’t a lucky number, per se, but, a number that indicates stability. The rule of 8 or the Octet rule is the tendency of atoms to have eight electrons in their valence shell.

Eight electrons in this final shell allow atoms to be stable and non-reactive.

Noble gases, for example, are some of the most non-reactive chemical elements one can find in nature. They compose the far-right section of the periodic table and are known as noble gases because they are so self-sufficient! They have 2, 8, 18, or 36 electrons in their last shell. Atoms tend to be reactive when their valence shell (or outermost shell) is incomplete. To achieve a complete state or a closed shell, an atom does one of the 3 things: lose, gain, or share its electrons with other atoms.

An atom isn’t as simple as we think it is—a nucleus with a few protons and electrons—but it is rather a combination of several shells arranged in concentric circles, called the electronic configuration of the atom. The valence shell can be a tricky concept to jump into directly, so let’s begin with the basics.

What is the electronic configuration of an atom?

The electronic configuration of an atom is the distribution of electrons in an atom. Imagine our solar system, with the planets revolving around the sun; similarly, the atom has electrons revolving around its central nucleus in distinct electron shells.

The Bohr model, discovered by the Danish physicist Niels Bohr in 1913, was the first model to suggest that electrons in an atom are contained in electron shells. This shell only allows a certain number of electrons to be a part of it. Another scientist took this theory forward and came across a unique finding during one of his lectures.

The American physical chemist and professor Gilbert Newton Lewis stated that, like the Helium atom, with 2 electrons in its valence shell, 8 electrons might be arranged in successive shells, mimicking the corners of a cube. This arrangement led to a very stable state of atoms, due to their resemblance to noble gases.

The nth shell of an electron will accommodate 2n2 number of electrons, where n is the principal quantum number or the energy level. In quantum mechanics, there are 4 quantum numbers assigned to every electron in an atom to designate a unique state of the electron. These quantum states of an electron make up for the wave-like nature or orbital of an electron. This forms a part of advanced chemistry, which is beyond the scope of this article; further reading is recommended, if required/desired. 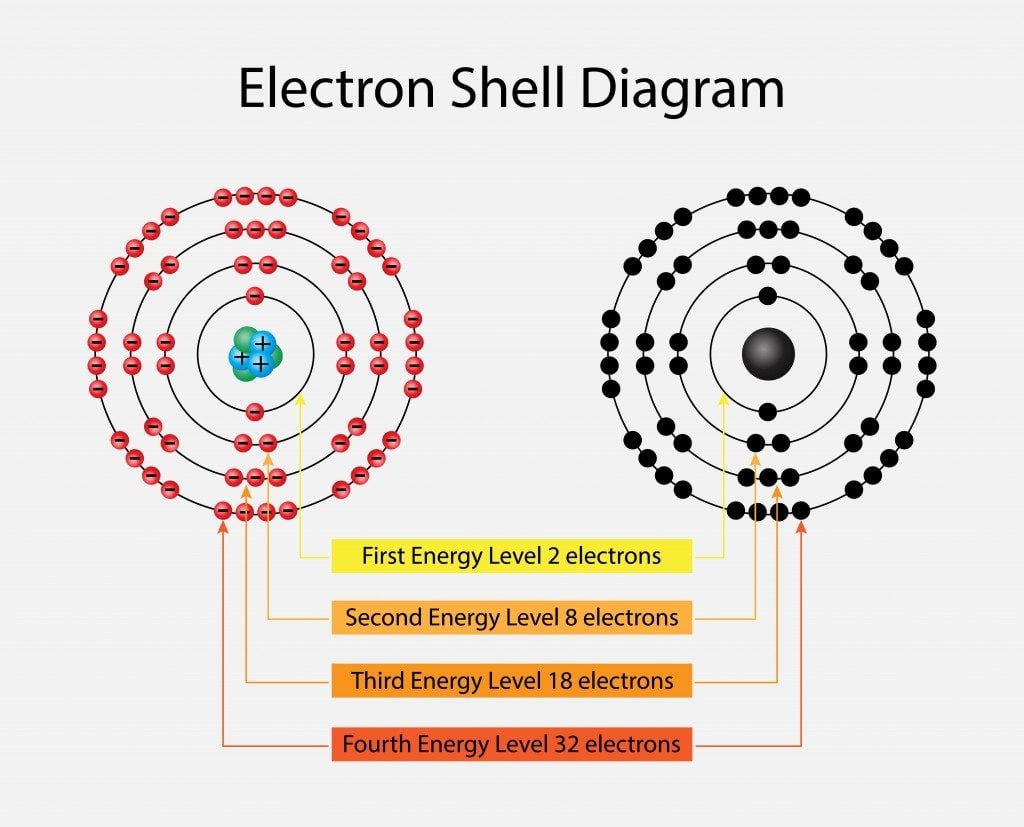 Now, one might think: why not adjust all these electrons into one shell and make chemistry a bit easier?! Well, another scientist, Wolfgang Pauli, probably had the same doubts, which led to his discovery of an interesting fact about electron behavior.

Pauli came forward with the Pauli Exclusion Principle in 1925, affirming that two electrons cannot occupy the same orbital, and that the same orbital must have opposite spins. In short, a shell has sub-shells, and each sub-shell consists of one or more atomic orbitals; each orbital can only hold 2 electrons, each with an opposite spin.

What are sub-shells and orbitals?

When n=1, ℓ= 0 and it corresponds to the s orbital, which has only 1 substate [2(0) +1= 2]; ℓ= 1 is the p orbital with 3 substates (px, py, pz); ℓ= 2 is d with 5 substates; and ℓ= 3 is f orbital with 7 substates. Every orbital has a different shape. The s orbital is spherical, p is dumbbell-shaped, d is cloverleaf with one unique shape and f is a more complex version of the d orbital. Also, every orbital can only hold 2 electrons that spin in opposite directions. Only the s and p orbitals are involved in the octet rule. Let’s consider a Sodium (11) atom, which has a total of 11 electrons. If you calculate its distribution of electrons based on the information above, you will see that Sodium has 3 shells; the first shell will contain 2 electrons and the second will have 8, leaving us with 1 lone electron in the 3rd shell.

The electronic configuration is 2, 8, 1. The first shell only has 1 orbital (n=1 and l=0) and accommodates 2 electrons. The second shell has 8 electrons and 2 orbitals. The first 2 electrons form a part of the s orbital and the other 6 of the p orbital (n=2 and l=1). The last electron will go in the 3rd shell and will be a part of the s orbital again. The electronic configuration will then be: 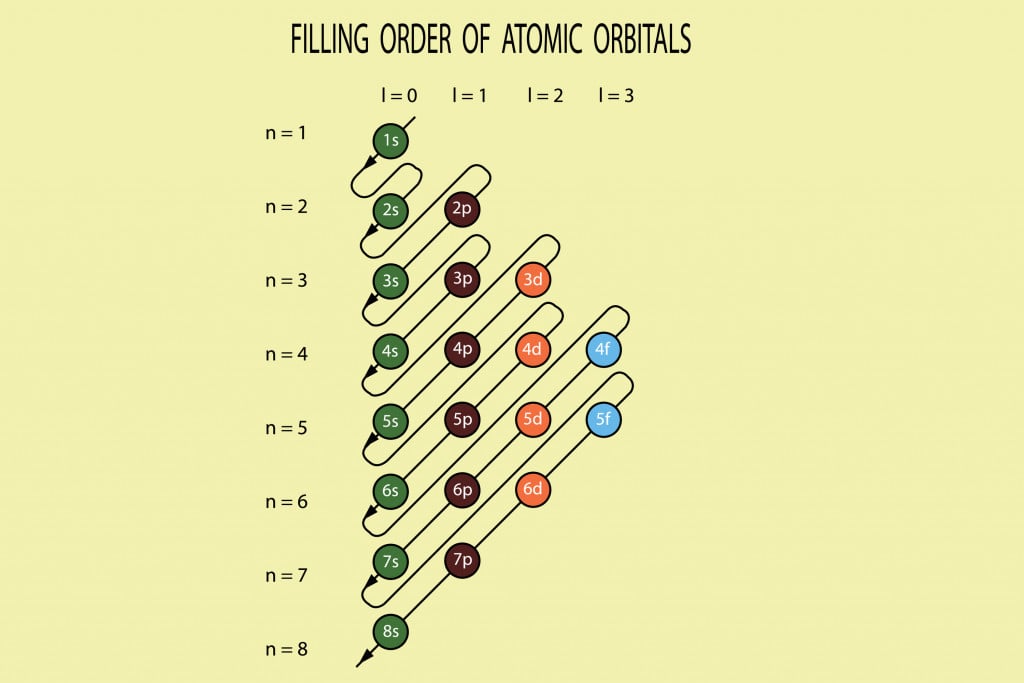 The filling order of electrons in the orbitals of an atom. The lower energy levels are filled first. (Photo Credit : Amalakanti Satya Sarada/Shutterstock)

The single electron in the 3rd shell is what makes the sodium atom unstable and reactive. Due to the incomplete number of electrons in the valence shell, sodium is known to have an open shell. To gain stability, electrons in the last orbital form covalent or ionic bonds with others. This bonding leaves both atoms with 8 electrons in their last shell and a more stable molecule.

Sodium tries to attain a state like the noble gas closest to it, Neon. The valence shell of Neon is complete with 8 electrons and has a closed shell. The electronic configuration is:

Most other elements try to form covalent or ionic bonds to reach a state similar to the closest noble gas. Some of the electronic configurations of noble gases are as follows:

Every shell is complete, each orbital is filled with the right number of electrons, and as a result, noble elements are very stable. There is no chance of another molecule interacting with them, as they don’t have anything to offer. Imagine you are a tightrope walker and have a cane in your hands for balance. You wouldn’t want to give up the cane because you’re afraid you might fall. At the same time, you wouldn’t want another person to help you, because it might affect your balance. Similarly, noble elements are so stable that their need to gain or lose electrons doesn’t exist.

Exceptions to the Octet rule

Gilbert Lewis was aware that the octet rule couldn’t be universally applied to all elements. In 1916, the number of molecules discovered was considerably less, and as a result, the octet rule was considered as a rule of nature. Over the years, this rule became so ingrained in the minds of people that it was difficult to accept that the exceptions to the rule actually outnumber the inclusions!

As it turns out, only elements belonging to the Main Group (Group 1, 2, 14-18 ) of the Periodic table follow the octet rule, leaving out a huge chunk of other substances. The general exceptions include those molecules that have an odd number of electrons and those in which atoms possess more than or less than 8 electrons.

The octet rule is pivotal in identifying the reactive nature of atoms. Whether an atom forms covalent or ionic bonds is identifiable from the Lewis Electron dot structures. Atoms are constantly in search of stability, and therefore form chemical bonds to have an electronic configuration similar to noble elements. Although the octet rule isn’t universally applicable for all elements, it forms the foundation of our understanding of chemistry!

Do you remember why atoms with 8 valence electrons are so stable?