Atoms can be thought of like Lego blocks; they combine together in different ways to make different things. So, the same Lego blocks can make a boat or a bridge, as the atoms that can make a blade of grass or a giraffe. When two or more atoms come together, they form a molecule. The number of atoms in a molecule denotes the prefix, so a molecule containing two atoms is called diatomic.

There are different types of diatomic molecules. Let’s begin this discussion by better understanding the workings of a molecule.

Molecules are the components of matter; they are the smallest particles that exhibit the chemical properties of the element to which they belong. Molecules can be homonuclear, meaning they can consist of atoms from only one chemical element (e.g., Hydrogen (H2)), or they can be heteronuclear, meaning they can be a chemical compound with atoms from more than one element (e.g., Water (H2O)).

Molecules are formed when two or more atoms are held together by chemical bonds. This bond represents a lasting attraction between molecules, ions and atoms. This bond can be a result of the attraction of oppositely charged ions or the sharing of electrons between two atoms.

Atoms are stable if their outer layer is either filled or empty. For it to be considered filled, it needs to have 8 electrons in the outer layer, which is called an octet. When this is not the case, the atoms bond to either gain or lose an electron from another atom, or share electron pairs with another atom. 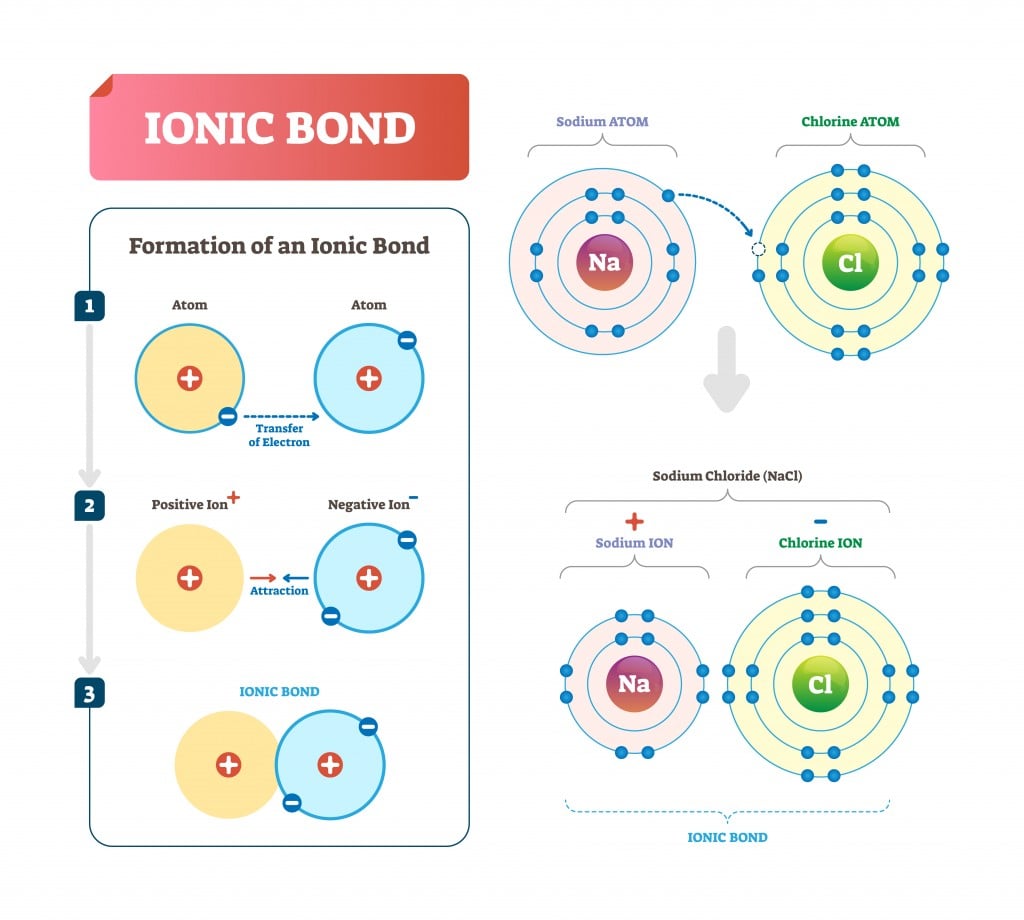 Take the case of NaCl (table salt). Chlorine contains 7 electrons in its outer shell and needs one to complete its octet. Sodium has 1 electron in its outer shell, which it donates to chlorine to form an ionic bond.

A covalent bond occurs when electron pairs are shared between two atoms; it is also the strongest of the chemical bonds. This sharing of the electrons helps the atoms reach their stable state.

Molecules with two atoms of the same or different chemical elements are called diatomic. Almost all diatomic elements are gases at room temperature (e.g., Hydrogen, Nitrogen). Some elements become diatomic at higher temperatures.

Diatomic molecules of Nitrogen (78%) and Oxygen (21%) make up most of the earth’s atmosphere. At the interstellar scale, the diatomic molecule of hydrogen is the most abundant in the entire universe.

Diatomic molecules can be two atoms sharing one nucleus, which are usually of the same element, or two atoms in two nuclei of two different elements. 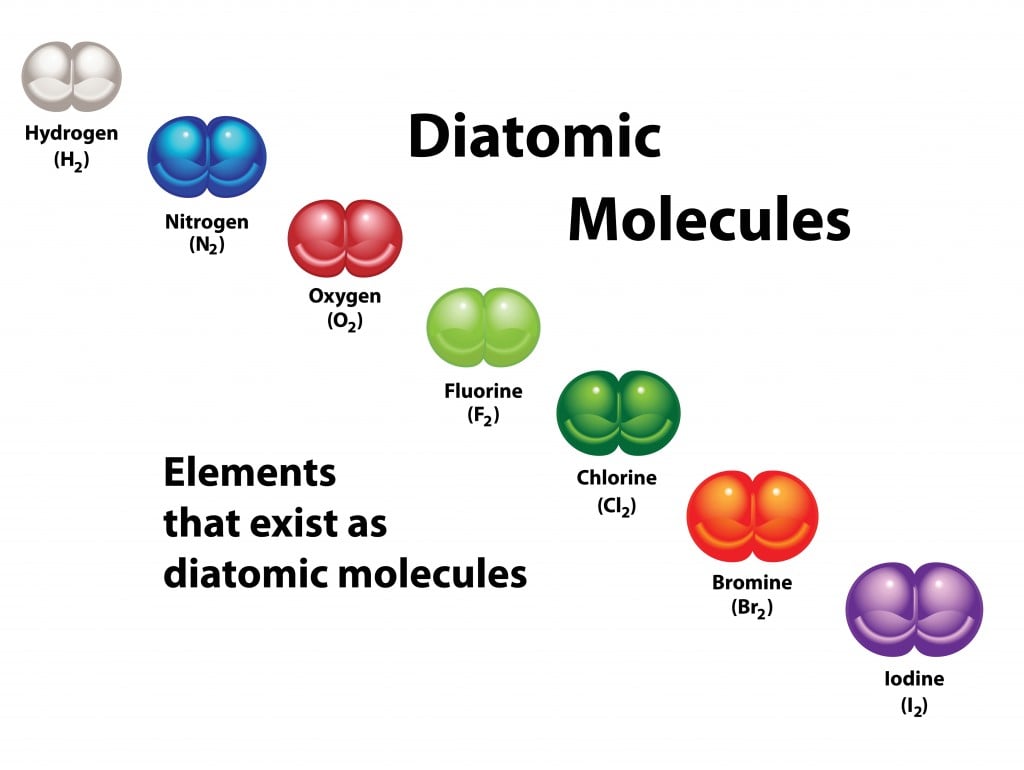 Also Read: What’s The Difference Between A Molecule And A Compound?

Homonuclear molecules are those that consist of atoms of only one element. The only elements that form diatomic molecules in room temperature are gases. These are:

Hydrogen is found in abundance in the overall makeup of the universe. A hydrogen atom consists of only one valence electron in its outer layer. To become stable, the hydrogen atom needs another electron to complete its layer. This is done by sharing a proton with another hydrogen atom through a non-polar covalent bond, thus making it a diatomic molecule. Nitrogen is the most prominent element in Earth’s atmosphere. A nitrogen atom consists of 5 valence electrons in its outermost layer. To make a stable compound, two nitrogen atoms come together and share three electrons of the opposite atom, leaving 8 electrons in the last layer. This becomes a diatomic nitrogen molecule with non-polar covalent bonds between the two atoms.

Oxygen is readily found in the earth’s atmosphere, as well as in the overall makeup of the universe. An oxygen atom consists of 6 valence electrons in its outermost layer. It shares two electrons with another oxygen atom through a non-polar covalent bond to become a stable diatomic molecule.

Fluorine is a highly toxic pale gas with a sharp odor that exists as a diatomic molecule at room temperature. The outermost shell in a fluorine atom contains 7 valence electrons. It shares one electron with another fluorine atom through a non-polar covalent bond to become stable and form a diatomic fluorine molecule.

Chlorine is an extremely reactive element that is yellow-green in color and exists as a gas at room temperature. It consists of 3 layers of electrons and has 7 electrons in its outermost layer. It shares one electron with another chlorine atom through a non-polar covalent bond to form a stable diatomic chlorine molecule.

At room temperature, Bromine is a red-brown liquid. This element forms diatomic molecules when the temperature is increased and it becomes gaseous. The outermost layer consists of 7 electrons, and needs one to become stable and make Br2.

Iodine exists as a purple-black non-metallic solid at room temperature. Similar to bromine, it forms a diatomic I2 molecule when heated. An iodine atom shares one electron with another atom to complete its octet and become stable.

This is a colorless gas at room temperature and forms white fumes (Hydrochloric acid) upon contact with the atmosphere. A hydrogen atom has one electron in its outermost layer and chlorine has 7, so they form a covalent bond to complete the octet and become a stable diatomic molecule. 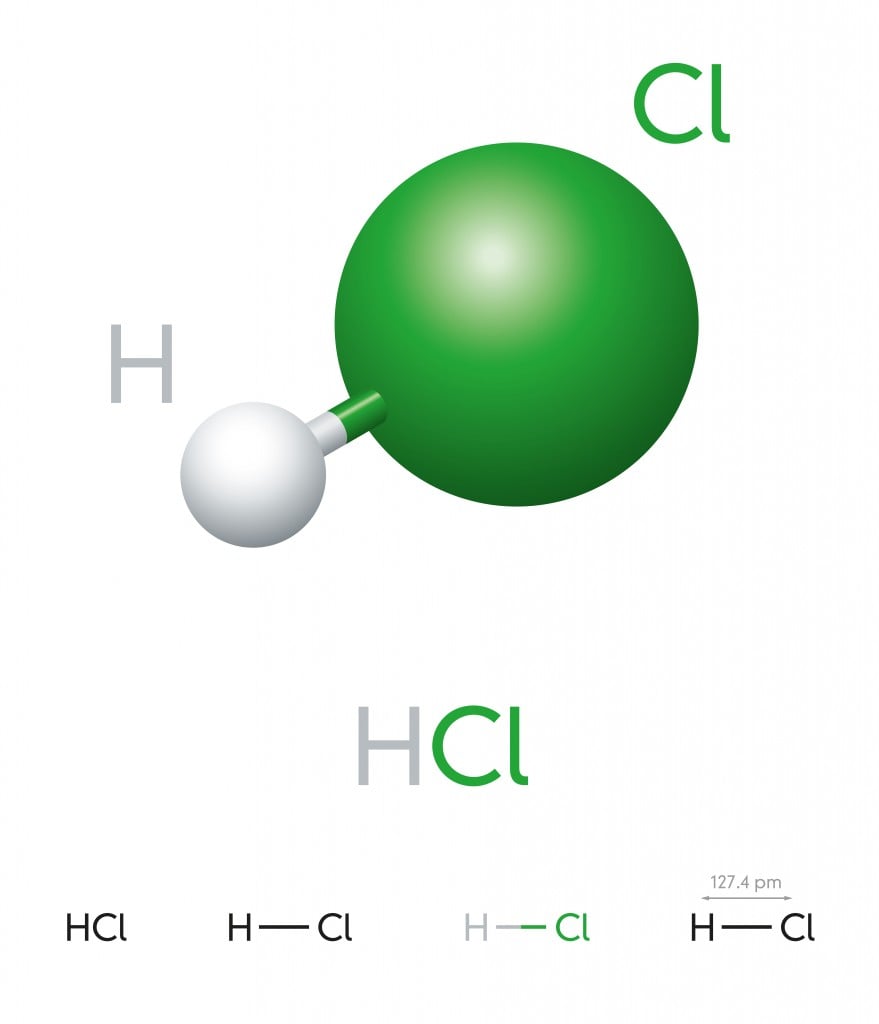 Carbon Monoxide is a flammable gas that is odorless, colorless and tasteless. It is slightly less dense than air. Carbon has 4 and oxygen has 6 valence electrons in the outermost layer. The atoms form a triple bond to become stable and thus become a heteronuclear diatomic molecule. Nitric oxide is a colorless gas. A nitrogen atom has 5 valence electrons in the outermost layer and oxygen has 6, so they bond together to become stable diatomic molecules. One electron is left unpaired, which makes nitric oxide a free radical.

Some of the most abundant and common elements on our planet are diatomic molecules. Ranging from the homonuclear to heteronuclear categories, diatomic molecules represent a stable state for elements due to the strong chemical bonds that form between valence electrons.