From the era of ancient Greek philosophy to modern quantum mechanics, the atomic theory has had multiple updates, each of which was quite revolutionary for its time.

Our understanding of the nature of things around us is in perpetual flux. Things that seem pretty obvious now might not have existed a century ago or might become obsolete in the decades to come. A perfect example of science refining itself over time has been the evolution of the atomic theory.

Let’s begin from the good old days, when science was not evidence-based, but more like a form of philosophy; people believed everything was made of only four elements—water, fire, earth and air. Imagine how easy chemistry would have been back then!

Around 400 BC, a Greek philosopher named Democritus came up with a theory that everything in the world was made of tiny indestructible particles called “atomos”, which means “uncuttable”. He believed that the properties of materials depended on the type of atomos they were made of. For example, sour or sharp-tasting things were made of particles with pointy edges, sweet stuff was made of more rounded and smooth atoms, while metals were made of hard atoms. Apart from this shape misinterpretation, Democritus was pretty much on the right track concerning atomic composition dictating the property of a substance.

However, this theory was largely discredited by Aristotle, the original social influencer, who believed that everything on the planet was made of four elements: earth, fire, water, and air.

The next stop in the ever-changing atomic theory came almost 2,000 years later, from a British chemist and meteorology enthusiast named John Dalton. He conducted experiments where he mixed two gases and observed their behavior. Most of the gases he tested existed independently without being bothered by the presence of the other. However, he found something different when nitric oxide was allowed to interact with atmospheric oxygen. 36 measures of pure nitrous gas reacted with 100 measures of air to give 80 measures of a new gas that was neither nitrous nor oxygenous.

This piqued his curiosity, so he conducted the same experiment with different volumes of gas. He observed that the gases reacted with each other only in a fixed ratio, which gave rise to the law of multiple proportions and the theory of atomism.

Dalton theorized that everything in this world was composed of atoms—tiny indestructible solid spheres that were unique for every element. Atoms of different elements combine to form different compounds and were rearranged during chemical reactions. Even after 200 years, some of this concept remains true.

Until the late 19th century, atoms were pictured as indivisible particles; the first person to break this notion was the English physicist J.J Thompson and his trusty cathode ray tube. Inside a glass tube vacuum, a visible beam of particles or cathode rays was generated by applying high voltage across metal electrodes. The stream of particles produced from the metal deflected away from the negative charge and tended towards the positive charge.

After repeating this experiment several times with other metals, he came up with the first atomic model. His famous plum pudding model described an atom as a particle made of a positively charged mass (the pudding) with tiny negative charges embedded in it (like plums).

After some initial resistance, this model became quite popular in the scientific world, yet New Zealand-born Ernest Rutherford was not convinced. In was the early 1900s, radioactivity was all the rage, and Rutherford discovered alpha, beta, and gamma rays during his work on radioactive decay. He wanted to develop a method to produce alpha particles and use that to probe into the structure of an atom.

He did what every physicist at the time did—he came up with an experiment. The gold-foil experiment, also known as a Geiger–Marsden experiment, consisted of a thin sheet of gold foil with a circular Zinc Sulfide-coated screen behind it that would flash every time an alpha particle hit it. Rutherford expected the particles to bullet through the foil and hit the screen behind it. While most of the particles did behave as expected, some were deflected at an angle greater than 90 degrees. 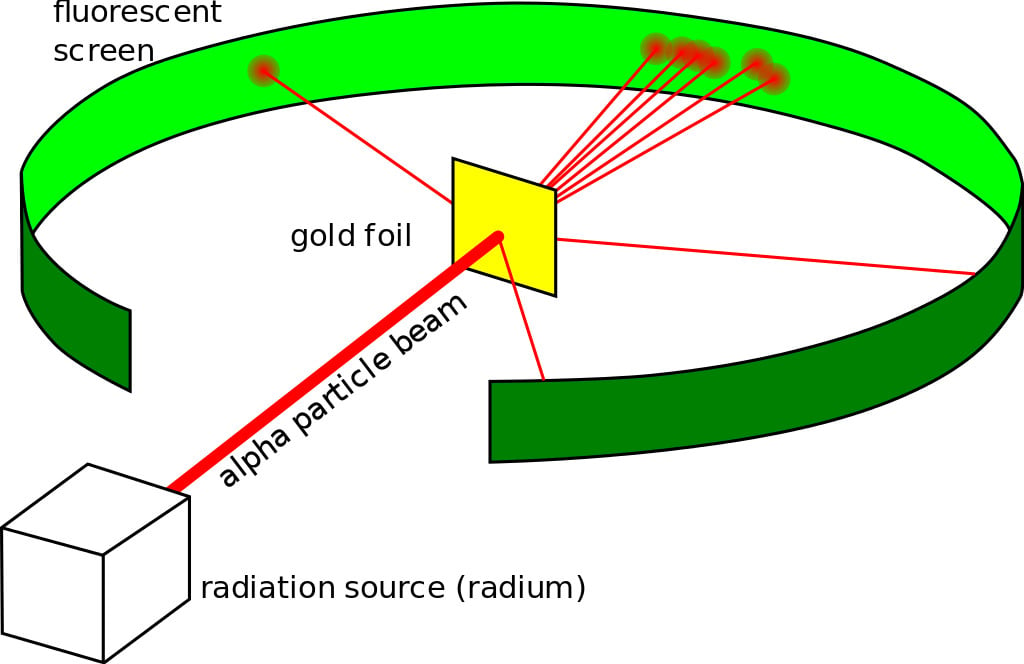 Backed by his observations, he came up with a new atomic model that disproved the previous one. He proposed an atomic structure where most of the atom’s mass was concentrated in a positively charged center (which he later named the nucleus, Latin for “nut”), around which the electrons orbited like planets around the sun.

A year after the publication of Rutherford’s atomic theory, Niels Bohr found a discrepancy in the model. If electrons were to orbit around a positively charged center, at some point, those electrons would lose their energy and collapse into the nucleus, making the atoms unstable. However, that wasn’t the case, as most atoms proved to be pretty stable (other than the radioactive ones).

This is where quantum physics came into the picture. Bohr used the concept of quantized energy to propose that electrons moved around the nucleus in fixed orbits or shells. The shells closer to the nucleus have lower energy, and the one farthest away has the highest. If an electron jumps to a lower energy orbit, it gives out the extra energy in the form of radiation, thereby maintaining atomic stability.

Even though Bohr’s model doesn’t hold true for complex multi-electron systems, this model is still the most popular representation of atomic structure in most textbooks.

No matter how much we try, there is no avoiding the complexities of quantum mechanics. With the establishment of the quantum behavior of entities like electrons, it became quite clear that Bohr’s atomic model did not satisfy the Heisenberg Uncertainty principle. According to the uncertainty principle, it is impossible to know the exact position and trajectory of electrons in an atom, which means that they cannot exist in fixed orbits, as Bohr hypothesized.

Combining the concept of wave-particle duality and the uncertainty principle, Erwin Schrödinger came up with the quantum mechanical model of an atom. In this model, the electrons do not revolve around the nucleus in circular orbits, but rather as electron clouds in an atomic orbital—a region inside the atom where the probability of finding an electron is the highest. He also formulated the Schrödinger wave equations, which would help us accurately calculate the energy of levels of electrons in an atom. This new and improved atomic model does not tell us where an electron is, but where it could be. 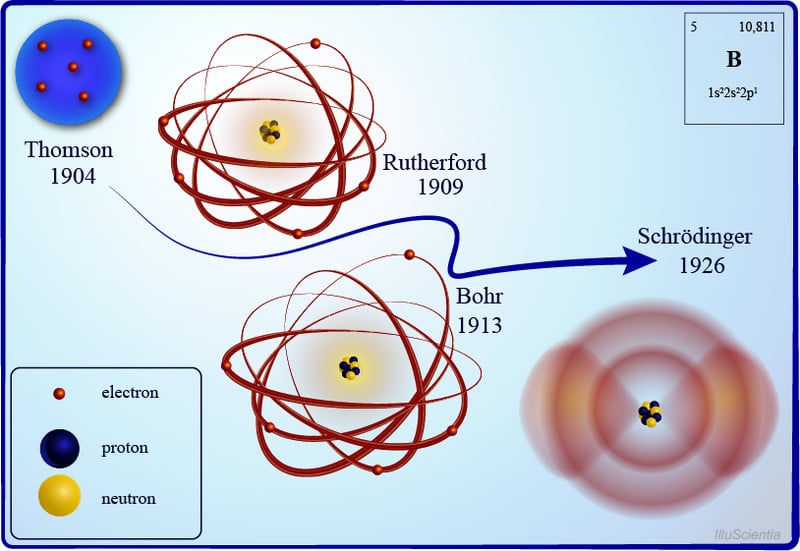 Humankind has always been riddled with big questions: What makes up the world around us? And why do different materials behave differently?

Every step in the evolution of the atomic theory has brought us slightly closer to understanding the secrets of the subatomic particles that govern our vibrant and vivacious world. And yet… there is always more to learn!