The motion of molecular motors (motor proteins) in transporting cell organelles and setting the stage for cell activities like cell division, muscle contraction, etc. is believed to be root cause for cellular sounds. The study of the sounds of a cell is called sonocytology.

The inner voice that often tells you to take the leap, quit the job, confess to your crush and give voice to your random violent thoughts may actually be your cells singing a symphony.

Well, not really, but your cells do sing and they might be able to give opera singers a run for their money.

Researchers in the year 2004 discovered that cells vibrate; when those vibrations are amplified, they sound like squeals. Also, each individual cell is thought to vibrate uniquely. Scientists argue that decoding these squeals could help us recognize the state of a cell and thus predict the arrival of a disease. This study of the sounds of a cell is called sonocytology (“sonos” ~ sound, “cytology” ~ study of cell structure and function).

Jim Gimzewski, a UCLA professor and physicist, along with graduate student Andrew Pelling, were the researchers to discover cellular sounds. Jim’s interest was piqued in the matter when Carlo Ventura, a medical researcher, informed him of his ongoing study on stem cells and their implantation in heart attack patients. The stem cells would need to be implanted at precisely the right moment (just when they start beating) in order to help heart patients. Jim asked Carlo to send him a few cells, stating that he would listen to them in order to find the exact moment in their development when they start beating.

He was also curious to see if all other cells beat, or if this was unique to the cells of the heart. Furthermore, if all cells indeed throbbed like heart cells, would the vibrations be sufficient to produce a detectable sound? 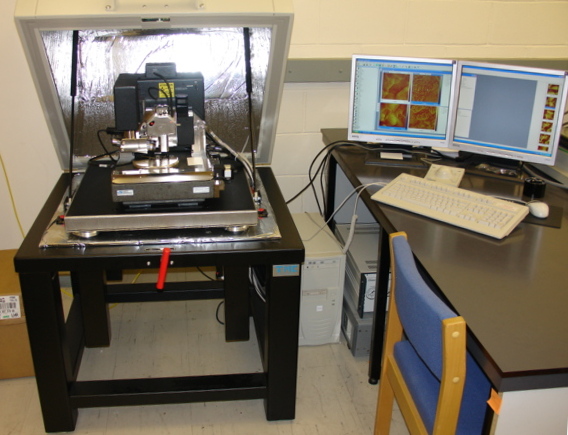 Jim and Pelling made use of an atomic force microscope (AFM) to listen to the cells. (Photo Credit : Zureks/Wikimedia Commons)

Being an expert in the field of instrumentation, Jim knew that the sound a cell produced wouldn’t be audible to the naked ear, but could be detected using a highly sensitive apparatus. The pair therefore made use of an atomic force microscope (AFM) to conduct their studies and hear the cells.

Due to the tragic circumstances of 9/11, the stem cells never arrived. However, Jim couldn’t wait to hear the song of the cells and instead decided to experiment on yeast cells that he obtained from his colleagues at UCLA. Yeast cells are often at the heart of many biological studies due to their rapid reproduction rates and the presence of fewer genes.

Before we go into further detail about the sounds of a cell, let’s take a brief look at the apparatus these researchers used to detect these sounds.

An atomic force microscope is a highly sensitive scanning probe capable of creating images of extremely tiny objects. This includes objects smaller than a nanometer (1 nanometer = 10–9 meter). The human hair itself is about 80,000 – 100,000 nm wide, and an AFM is capable of imaging objects much smaller than that.

The AFM consists of a cantilever beam with an extremely tiny tip (typically made of silicon or silicon nitride) affixed at one end. Much like a record player, the tip touches the surface to be imaged, while an xyz drive moves the cantilever beam across the surface. The tip is deflected every time it detects a ‘hill’ or ‘valley’ on the surface. This deflection is picked up by a laser being reflected from the cantilever beam. For every deflection of the tip, the laser is also forced to change its direction. The final result is a detailed image with every hill and valley mapped out on the surface of the nanoscopic object.

Coming back to our singing cells, Gimzewski & Pelling’s first experiment on the yeast cells shocked the world. The AFM recorded regular oscillations arising from the cell wall. The cell wall raised and fell by three nanometers (amplitude of the sound wave) and repeated this nearly 1,000 times per second (frequency of the sound wave). Using conversion software, the pair managed to turn the AFM image into a sound that could audible to the human ear. The result was a tone of about 880 Hz.

However, Gimzewski & Pelling were worried that the sound may have been due to some inner machinery of the microscope. The pair therefore ran even more tests on the yeast cells to confirm their initial findings.

They soaked the cells in rubbing alcohol (known to break the cell membrane and lead to cell death) to check if there was any change in the pitch of the sound. To quote Jim himself, rubbing alcohol made the cells scream at first, before silencing them to death. After replicating their experiments in various conditions, such as different chemical media and temperatures, and on different types of cells, they concluded that each cell produces its own unique sound. Their experiments also suggested that the sounds may be arising from inside the cells.

Jim believes the sound originates from the movement of molecular motors. Molecular motors are biological machines responsible for the transportation of materials inside a cell. They are essentially protein molecules (and are also called motor proteins) that utilize chemical energy from ATP hydrolysis to move along the cytoplasm of cells. Some of these motor proteins are responsible for carrying cell organelles like mitochondria, Golgi stacks, etc. to their individual locations in the cell, while others set the stage for phenomena like cell division, muscle contraction, etc. Examples of motor proteins are Kinesin, Mysosins, Dynein, etc.

According to Jim’s calculation, the energy required for the motor proteins to move and produce sound is the same. In support of Jim’s theory, motor molecules take roughly 1000 steps per second, which was also the frequency of the sound the AFM recorded. The unified movement of the motor proteins inside a cell is therefore believed to be the reason behind the sounds of a cell!

With every new piece of research come new critics. Some believe that there aren’t enough molecular motors to generate an audible sound, so ribosomes could be the ones making the cells sing. However, scientists are now more focused on how cellular sounds could be used for the public benefit, rather than finding their definitive origin.

The most interesting application of cellular sounds and the field of sonocytology proposed so far is the detection of diseases, such as cancer. As mentioned earlier, different types of cells make different types of sounds. This also includes mutant and cancerous cells. Cancerous cells are known to have a softer cell membrane, so if everything goes to plan, using the sounds of a cell and the AFM, the checking of a single cell could be enough to diagnose cancer. Also, sonocytology could help to create a library of sounds generated by cells affected with various diseases to help predict their arrival or development!