If you’ve ever been part of a group project, you know that communication is of the utmost importance. Well, life embarked on its own group project 600 million years ago, when the first multicellular life form is thought to have evolved.

With this transition came multiple challenges. The members of this group project, the cells, had to communicate and coordinate with each other. They now need to alert the rest of the body if they need something, for example, extra sugar or the attention of the immune system in case of an infection. Multicellular organisms also had to build efficient transport pathways (e.g., blood vessels) for the quick distribution of the required resources.

Therefore, all the cells in a multicellular organism must work together on this project called ‘survival’ and efficient communication is their key to success. But how is this possible? Cells don’t have ‘cell’ phones to talk to each other, nor do they have voices or mouths. Fortunately, they don’t need any of those things!

They accomplish all of this through an efficient and dynamic form of communication called cell signaling.

Cell signaling is the process of communication between the cells of the body. It follows a ‘simple’ three-step sequence.

Let’s imagine that cell A wants to get a message to cell B. Cell A secretes molecules that carry this message or signal. These molecules are known as signaling molecules and function like a postman or messenger. Signaling molecules can be lipids, proteins or even gases. Now, in order to receive the message, Cell B needs a receptor. A receptor is a protein that can bind to a signaling molecule. They are located either on the cell surface to bind to external molecules or they can be cytoplasmic receptors that bind to signaling molecules within the cell.

The binding of the molecule to its respective receptor on Cell B activates the receptor. This activation is brought about by a change in the shape of the receptor. The active receptor of Cell B can now launch a series of events in which the message gets amplified and spreads to other parts of the cells and sometimes even other molecules. This is the second step of cell signaling, called transduction, and the process is called a signal transduction pathway.


The third and final step is response. The signaling molecule has now successfully delivered Cell A’s message to Cell B. Cell B must now decide how to respond to this message. The response will occur as a result of the signal transduction pathway initiated by the activation of Cell B’s receptor. For example, if Cell A has alerted Cell B to an increased level of blood sugar, the resulting response will be ramping up insulin production.

The sequence of cell signaling remains is the same for most cell but depending on the distance separating two communicating cells, cell signaling can be classified into several different categories.

In the case of intercellular signaling, the type of signal can be further classified on the basis of the distance travelled. 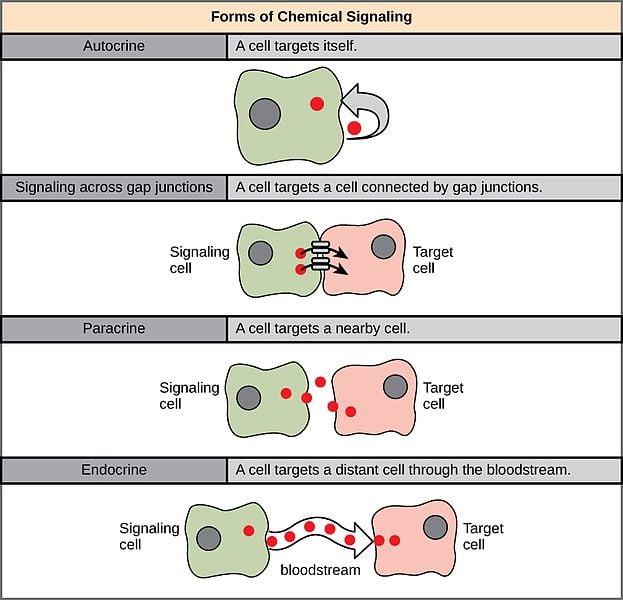 Autocrine Signaling: Sometimes cells can produce signaling molecules that bind to receptors on their own membrane. In this way, it’s possible for cells to send messages to themselves! Although it sounds strange, autocrine signaling is essential during development, as it ensures correct cell division and maintenance of cell identity. Think of it as setting reminders and writing notes to yourself; it may seem weird, but it’s necessary sometimes.


Direct-Contact Signaling: Some cells lie very close to each other and are in direct contact. Such cells have passages that connect them. For example, gap junctions in animal cells and plasmodesmata in plant cells are such passages that connect neighbouring cells. Signaling molecules can easily pass through these passages. This feature enables a group of cells to respond to a signal received by just one cell.

Paracrine Signaling: This form of communication takes place between cells that are near each other, but are not connected. In this case, the cells talk via the diffusion of chemical signaling molecules across short distances. Synaptic signaling between neurons (brain cells) is an example of paracrine signaling. Neurons release signaling molecules called neurotransmitters in the gap between themselves and the next neuron. This gap is known as a synapse. Hence, synaptic signaling allows our brain and central nervous system to work together by sending messages across multiple neurons. Endocrine Signaling: This is a method employed by cells that are far apart from each other. Like a package that is shipped internationally, signaling molecules may travel through the bloodstream to reach the target cell. Such molecules are called hormones. For example, the hormone adrenaline, released by the adrenal gland present atop the kidneys, is the fight or flight hormone. Adrenaline is released under stress and is responsible for increasing heart rate and blood pressure, redistributing blood to muscles, ramping up glucose production and much more. Hence, this hormone travels throughout the body from the adrenal gland via the bloodstream to the cardiac muscles to increase pumping, as well as to the liver for glucose production.


The Importance of Cell Signaling

Communication amongst the many cells of the body enables us to respond and adapt to our ever-changing environment. From a developmental aspect, cell signaling ensures that all body organs and tissues are on the same page. That is, it guarantees that things like cell functioning, size, location and number are kept in check. In this way, cells of different specialized tissues maintain their identities and functions. For example, cardiac cells are only present in the heart and hepatic cells are only found in the liver, and both perform their respective specialized role. The role of cell signaling does not end after the developmental stage. It is required to alert the body’s immune system to any bacterial or viral invasion. In other words, cell signaling is not a 9 to 5 job. It helps the body to acclimatize, and these highly complex signaling pathways are extremely important for one’s well-being. Researchers have linked multiple diseases like cancer, epilepsy, multiple sclerosis, and Alzheimer’s disease to defects in the signaling pathways.

Do you best to keep your cells ‘chatty’ by maintaining a healthy lifestyle and a diet full of proteins, vitamins, minerals antioxidants and healthy fats! 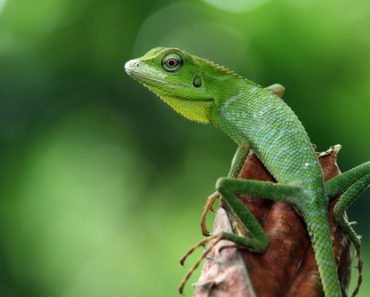