Plasmodesmata are small channels that connect plant cells. They facilitate interactions between the cytoplasm of adjacent cells through the the transfer of small and large molecules. They are an important route for cell-cell communication.

Plants are multicellular organisms; they are made of hundreds upon thousands of cells that function together, making up an organism as a whole.

For the organism to function, its cells must coordinate with each other, and to do that they need to interact with each other. However, one cell can’t just call or text another cell and talk to it.

In order to communicate with one another, plant cells came up with a strategy of using plasmodesmata. 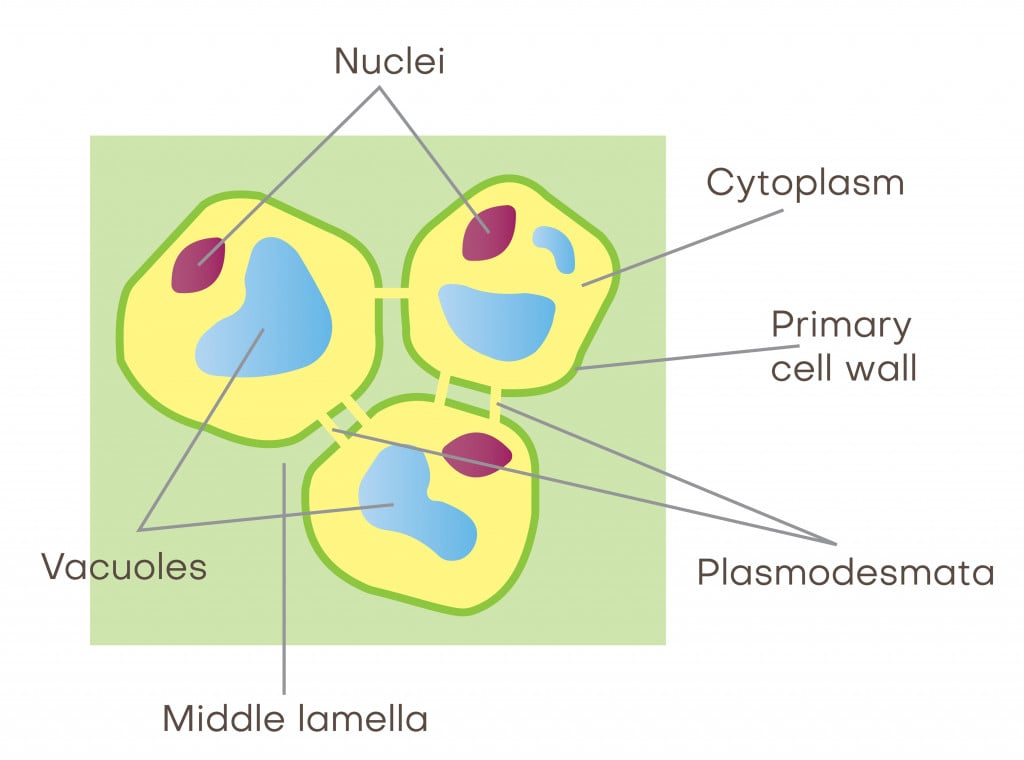 Three plant cells with distinct nuclei that enclose the genetic material and vacuole (that stores food) is presented above. The plasmodesmata are represented by the yellow bridge-like structures between the cells. (Photo Credit : Chinthaka_Suraj/Shutterstock) 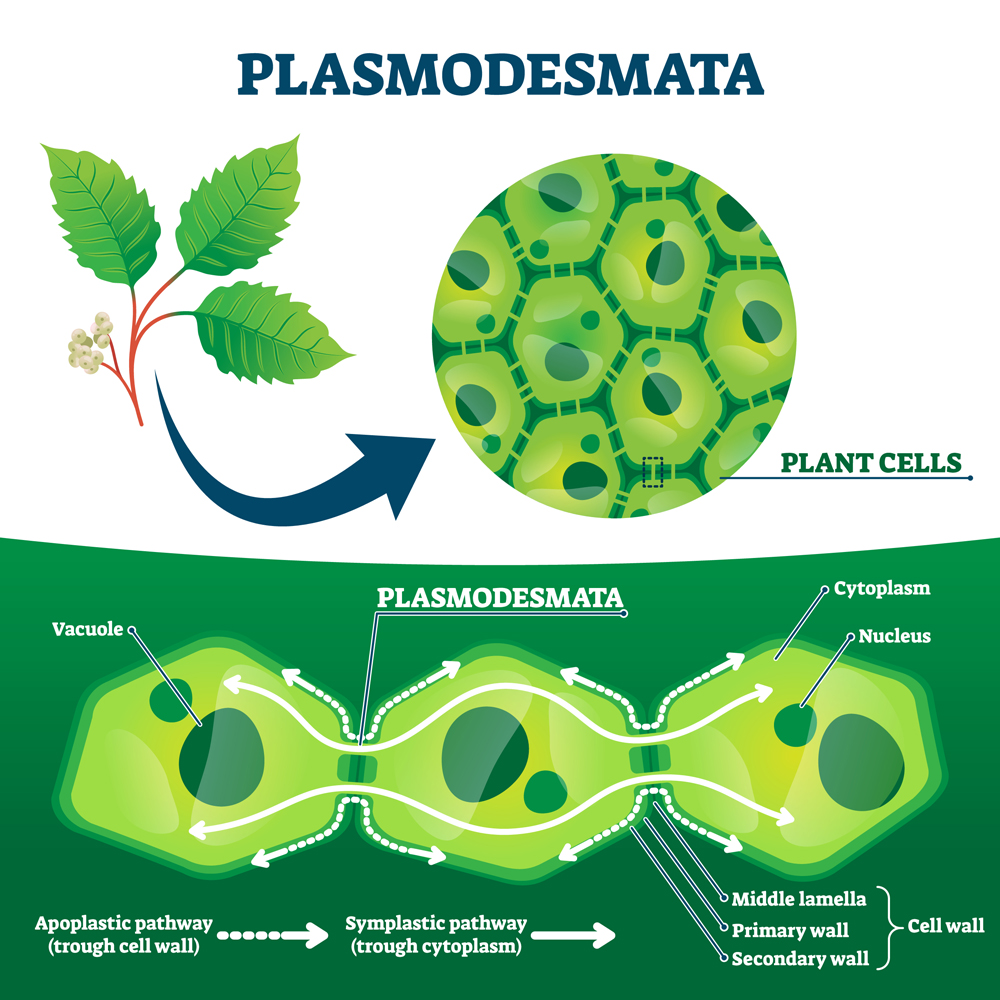 A plasmodesma (the singular of plasmodesmata) is made of two components: the membrane and membrane spaces.

The membrane part is an extension of the outer covering of the plant cell, the plasma membrane or the cell membrane. The membrane spaces are formed by the endoplasmic reticulum (a cell component), which runs between both cells, termed desmotubules.

The space between the membrane and the desmotubule will be the space for the movement of molecules.

Structurally, it can be a single tube, twinned or branched.

The plasmodesmata are like tunnels, in that they connect the plant cells and help the plant transfer important molecules for the proper functioning of plant activities.

The plasmodesmata also help regulate the flow of molecules through them. Just like the presence of toll gates ensure proper traffic management on roads, the proteins actin and myosin (the same proteins that help you move your muscles) help the plasmodesmata transfer molecules.


The movement of molecules between adjacent plant cells through plasmodesmata is called a symplastic pathway.

What molecules can pass through the plasmodesmata?

The transport of molecules through plasmodesmata depends on the size of the tunnel.

Under normal conditions, small molecules, such as sugars and amino acids, with sizes less than 1 kDa (kilodalton), can easily pass through the plasmodesmata.

Larger molecules like RNA and proteins can only pass through when the channel size is increased. This can happen due to external influences, such as the stage of development of the plant. The passage through plasmodesmata is flexible in nature, and can easily be modified according to its needs.

But what regulates the passage size?

The answer is callose deposition. Callose is a carbohydrate present in the plant cell wall that helps the plants survive several types of stress.

Plant cells have specific enzymes for the production and degradation of callose. The callose produced gets deposited at the neck of plasmodesmata (as shown in the diagram below), constricting the pore size of plasmodesmata. Thus, only small molecules can pass through. On the contrary, the enzymatic destruction of callose will relieve the constriction and increase the size of the passage for the movement of larger molecules.

Thus, fluctuations in callose deposition precisely regulate the transport of molecules through plasmodesmata. 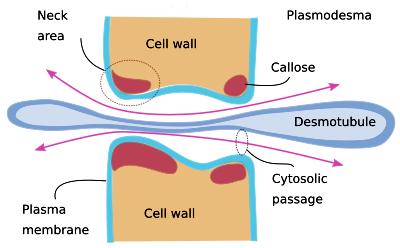 Caption: Diagram depicts the presence of plasmodesmata between the two plant cells. The callose deposition in the neck region restricts the pore size, making it narrow, whereas the passage is wide in the central area where there is no callose deposition.

Why are plasmodesmata important?

The plasmodesmata help the plant cells communicate with each other.

They regulate intercellular transport by altering the size of the passage, called the “plasticity” of the plasmodesmata. Factors like the area of plasmodesmata-mediated contact between the cells, number of plasmodesmata, length, as well as their cross-sectional area, can also determine the transfer rate.

Plasmodesmata play a significant role in vascular transport, as they transport nutrients produced by the leaves during photosynthesis to the tissues that require them.

In addition to transport, they also play a key role in plant immunity. They help the plants counter bacterial, viral and fungal pathogens. When a plant encounters a pathogen, one of the earliest defense responses would be the closing of plasmodesmata. If the passage is closed or blocked, the pathogen can no longer enter the cells and spread infection.