Traditional electricity is generated by the motion of free electrons, but neurons generate electric signals using the motion of ions across cell membranes.

Back in high school, as you open your biology textbook, you will almost undoubtedly see a chapter called “Central Nervous System” or “The Human Brain”. The lines read, “Neurons or nerve cells are the primary components of the nervous system. They send and receive information in the form of electrical signals from the sensory organs, facilitating communication with the brain.” The text probably also mentioned something about there being more than 86 billion neurons in every human brain.

However, the book likely didn’t explain how the neurons actually carried out this process of generating electrical signals. Yes, all of us remember the finger-like dendrites, axons and synapses, but the intricacies of the communication process may have eluded our high school minds.

Before we get into the details of the constant chatter between body and brain, let’s review the basics of nerve cells. Neurons or nerve cells, along with glia, make up the central nervous system. Glia or glial cells are essentially Robin if neurons are Batman. They don’t directly participate in the exchange of information between neurons, but they do help define synaptic contacts and maintain the signaling abilities of neurons. 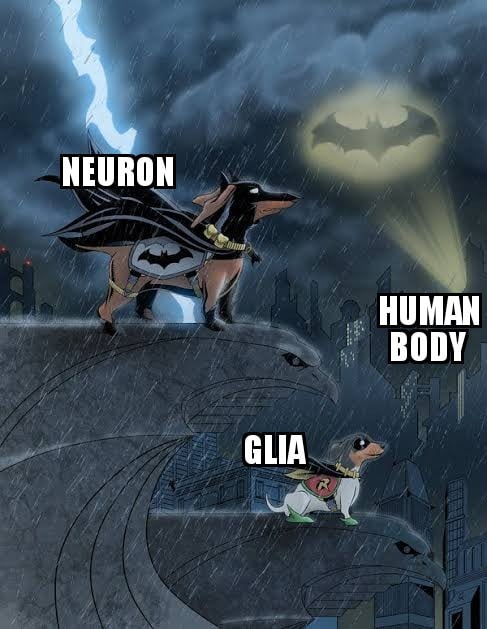 Neurons, on the other hand, are the Batman to the human body’s Gotham. Nothing in the human body happens without the neurons knowing about it. Just like every other cell, neurons have a cell body, often referred to as the soma, which contains the nucleus. Various branches or finger-like structures extend from opposite sides of the soma. An axon is the longer protrusion, while dendrites are the smaller branch-like structures on the other side of soma, as shown in the diagram below.

Neurons perform the critical task of carrying information across the entirety of the human body in three steps. First, they must receive signals or information from the sensory organs. If the signal is strong enough, it causes the neurons to transmit the signal to the next neuron by generating an action potential (see: electricity). Finally, this impulse reaches the target cells or other neurons.

Now, onto the important question that started this article… How is this communication achieved?

How is electricity generated in neurons?

Dendrites and the soma are responsible for receiving and processing all incoming information. A chemical substance called neurotransmitter binds to receptors on dendrites and causes conversion of the incoming chemical input into an electrical signal in the neuron, generating an action potential.

The electric signal sent by the soma to the axon is called an action potential, which is a result of the change in membrane potential.

Let’s discuss this in greater detail, shall we? 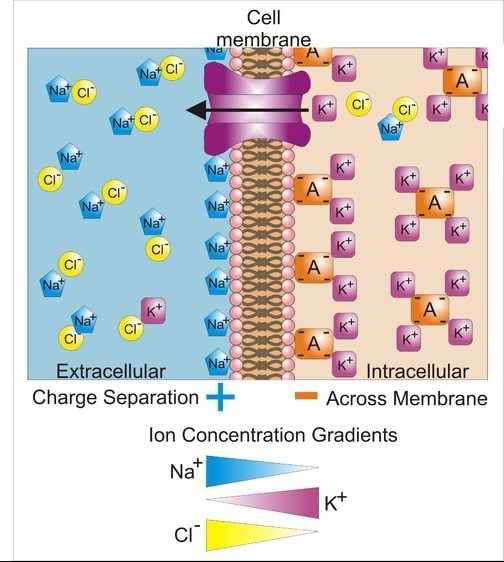 The membrane potential is a result of the difference in electrical charge across the cell membrane. The difference is caused by the grouping of ions. (Photo Credit : Public Domain/Wikimedia Commons) 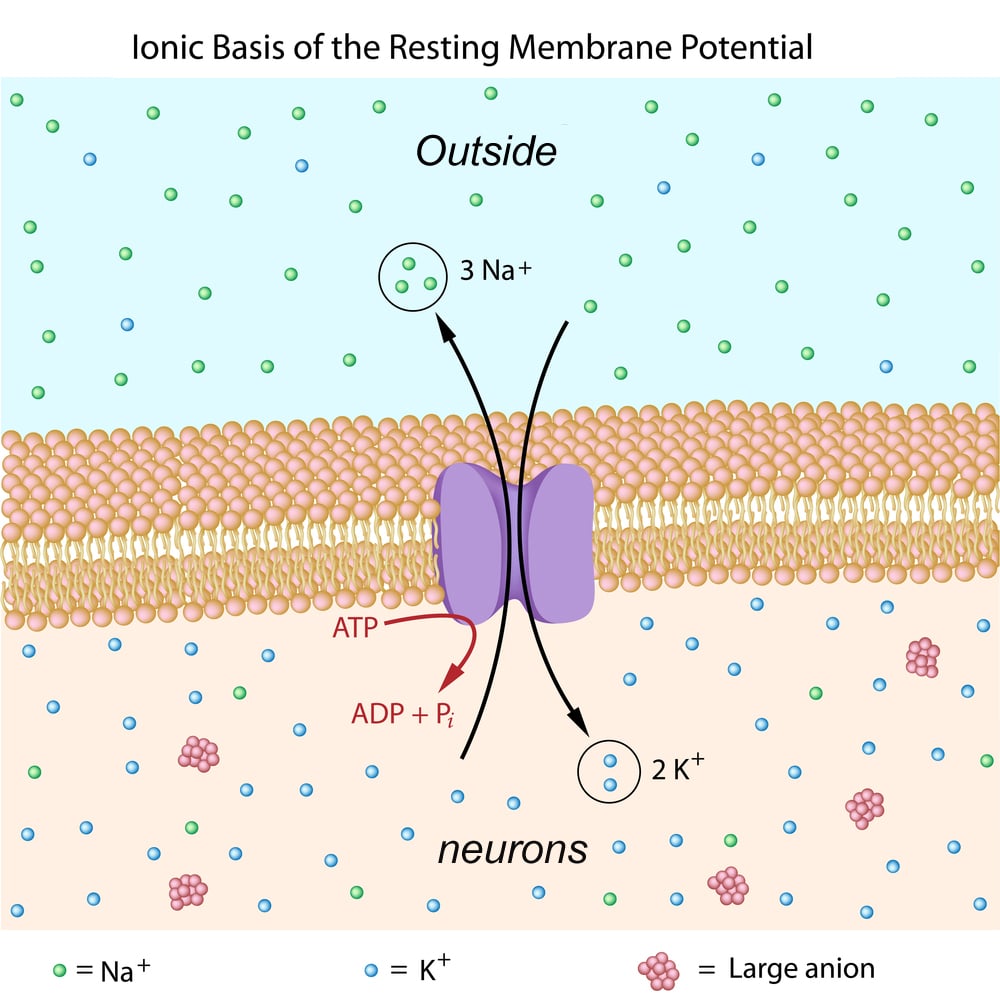 An ion pump helps to maintain the number of ions on both sides of the membrane. The pump pushes out three sodium cations (Na+) for every two potassium cations (K+) that the membrane lets in. (Photo Credit : Alila Medical Media/ Shutterstock)

Resting membrane potential is affected when a stimulus (a signal from another neuron) is encountered. The stimulus or incoming signal causes the sodium channels of the membrane to open. Since the inside of the nerve cells is approximately -70mv, the positively charged sodium ions (Na+) start rushing in. The membrane potential, as a result, begins to drop below -70 mv, a process called depolarization. 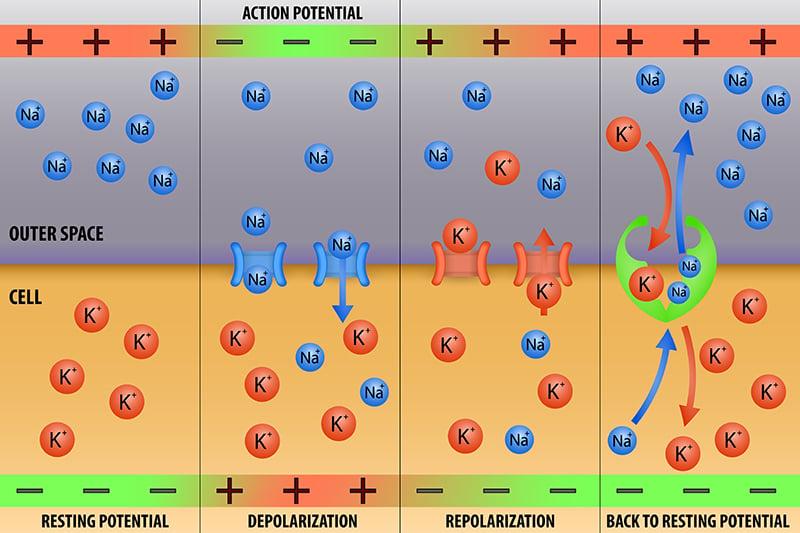 Different stages of how an Action Potential is generated. (Photo Credit : extender_01/ Shutterstock)

Once the potassium channels open up, potassium cations (K+) start rushing out to reestablish balance. This process is called repolarization. Also, at around the same time, sodium channels start to close. This causes the membrane potential to return to the resting value of -70 mv. 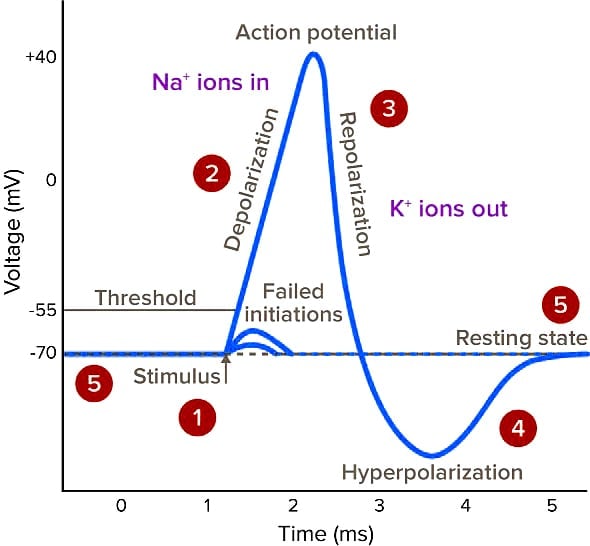 The graph shows the various stages experienced by a neuron when a stimulus is encountered.

In short, this is how an electrical signal is generated in the neurons. Traditional electricity is generated by the motion of free electrons, but the electricity generated by neurons results from the motion of sodium and potassium ions across the cell membrane. The electrical signals only help to transfer information from the cell body through the axon to the synapse. The transfer of information between two different neurons, in most cases is facilitated by chemicals called neurotransmitters. In some other cases, the signals are passed from cell to cell directly through channels called ‘gap junctions’. Neurotransmitters are another fascinating topic that deserves an article all to itself: How do neurotransmitters work?

Do you remember how electricity is produced by neurons?

Answer a few questions based on the article you just read and test your understanding.