Reflexes are faster than our normal reactions because reflex actions use a different neural pathway. Unlike normal movement, most reflexes bypass the brain, receiving signals only from the spinal cord.

Every one of us has burned our hand from touching a hot object, or has been zapped when touching an open electrical socket. We pull our limbs away from these objects of danger with remarkable speed. Even the clumsiest of us are able to execute these actions with extreme quickness. 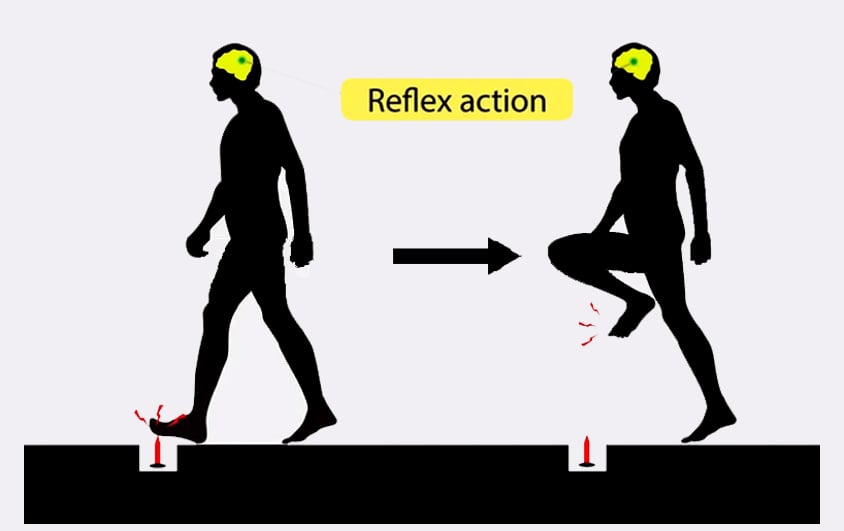 Mechanism of a reflex action

A reflex action is simply a fast response of our body to any dangerous situation, such as burning your hand from a hot object. Reflexes keep us safe and distanced from harmful things, so how does our body execute these reflexes?

Structure of a reflex arc

A typical reflex arc, in its simplest form, consists of: (1) a sensory neuron that senses the potentially dangerous stimulus, and (2) a motor neuron connected to a muscle in the limbs that moves to avoid potential danger. 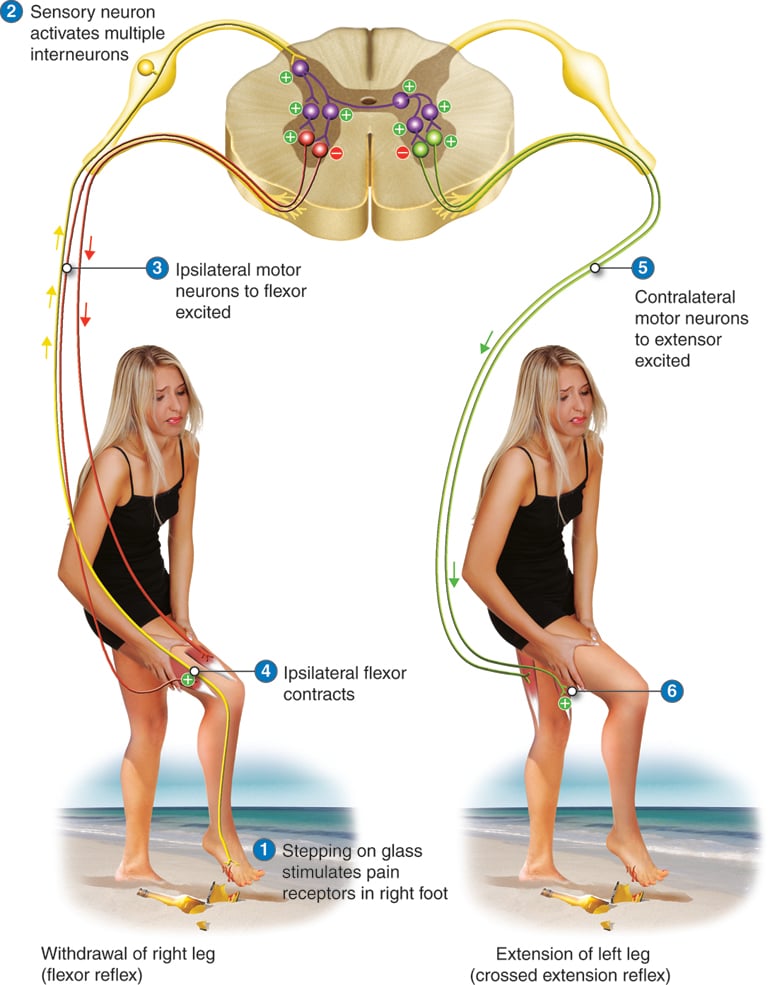 Imagine that you’ve accidentally touched the flame of a candle. The sensory neurons on your fingers sense the heat and the consequent signal travels up to the spinal cord. This is then passed on to the motor neuron connected to the muscle on your arm, which then contracts, moving your hand away from the flame.

The reflex arc neurons reside in the spinal cord of our body. The signals of danger travel up to our spinal cord. Commands from the spinal cord then travel down to our limbs through the motor neurons. However, you may have noticed that such a reflex arc completely bypasses the brain.

If we had no reflexes, the heat signal would be carried from your hand all the way to the brain’s sensory regions, and then to the motor regions. From here, the signal would have traveled to the arm, helping you move the arm consciously away from the hot object.

This type of circuit is much longer than a reflex arc, so it would take you a long time to consciously move your hand away from a hot object. Such a delay would result in you burning your hand. When faced with danger, every millisecond counts!

In contrast to normal movement, the reflex arc carries out the rapid removal of your hand from the hot object in an automatic way with a much shorter circuit, one that doesn’t require the signal to reach your brain.

Thus, reflexes are much faster due to their use of shorter circuits. Also, since these only involve the spinal cord, they are involuntary or automatic, rather than conscious movements. Any conscious movement requires the involvement of the brain.

The simplest reflex arcs usually contain only two nerve cells that meet at a junction called a synapse. Typically, there is one sensory neuron and one motor neuron that meet at one synapse or junction. These are therefore called monosynaptic. However, the human body contains more sophisticated reflex arcs that contain additional neurons. These are often called interneurons, which simply pass on information from sensory to motor neurons. Such reflex arcs are called polysynaptic.

There are two broad types of reflexes based on what action it takes in the body in response to danger. Some reflexes activate our internal organs – called autonomic reflexes, but the more popular and well-known reflexes are somatic reflexes, which cause specific muscles to move in our limbs.

A good example of the autonomic reflex is the contraction and dilation of our pupils in response to light. 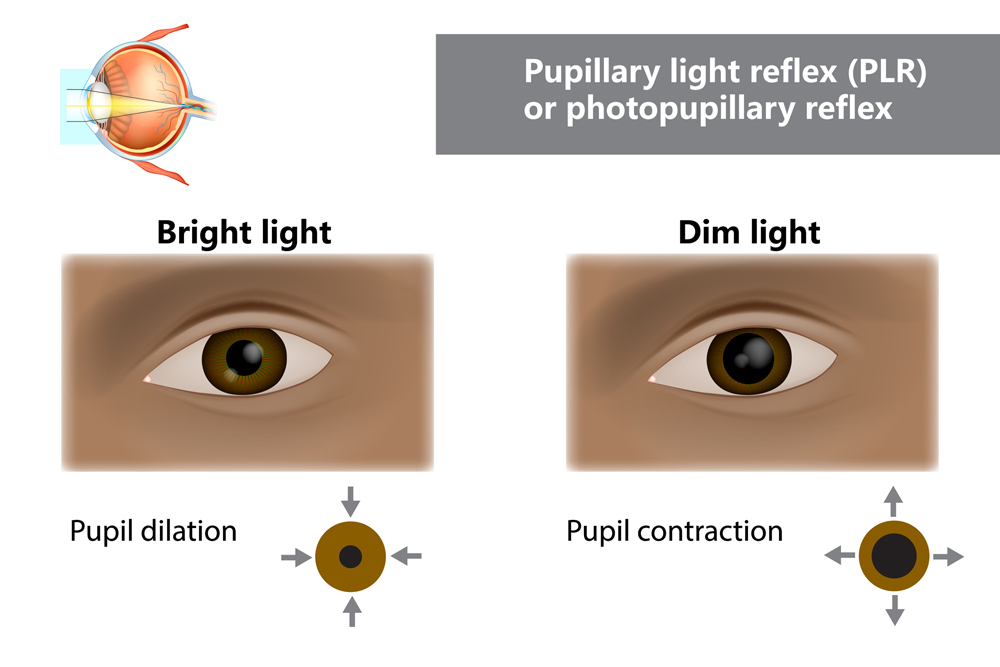 An example of autonomic reflex is pupil dilation and contraction in response to light (Photo Credit : Sakurra/Shutterstock)

When there is a sudden bright light in front of us, the sensory cells in the retina signal the reflex arc. This causes the muscles in the iris of our eye to contract, thus reducing the pupil size. This protects our eyes from any sudden exposure to bright light, which could potentially blind us. Several such reflexes take part in modulating our heart rate, breathing, and other similar functions without our conscious control, helping us to survive day in and day out.

Reflexes are automatic responses to harmful stimuli around us. These are executed by special pathways involving a sensory and a motor neuron. These reflex arcs bypass the brain and occur mostly in the spinal cord. Due to this, these actions are faster than typical movements and don’t require conscious control. This is particularly useful because we require extremely fast responses to avoid danger.

Although reflex actions are automatic, we do sense these events as they happen. This is because the sensory information is eventually passed to the brain. However, we would have completed the reflex action in that short interval of time. Therefore, it’s possible to “feel” the reflexes.

It is even possible to train yourself to actively stop a reflex action. The brain can send signals to “override” a reflex and consciously help us not respond to a stimulus, but only with a lot of training. Reflex actions, although typically fast, can get slowed down at times, such as in the case of consumption of alcohol. This is the reason why drunk driving is so dangerous. When drunk, our body will not be able to execute fast reflexes, such as suddenly hitting the brake to avoid a head-on collision, for example.

Reflexes not only help us move our body away from dangerous stimuli, but also help regulate the actions of our organs in response to changes in our environment. They play a crucial role in our survival, and are in some ways the “silent warriors” of our body!