Imagine walking down an empty street after dark, the cold wind whistling above your head, when a clatter of garbage cans from the alley behind you startles you. In that instant, not only do you walk a bit faster and take out your cell phone, but your body also reacts by releasing a truly mysterious defense… it causes the hair on the back of your neck and arms to stand up. Commonly known as goosebumps, this is one of the strangest physical reactions in the body, and one that many people don’t quite understand. So…. why do we get goosebumps when we’re cold? 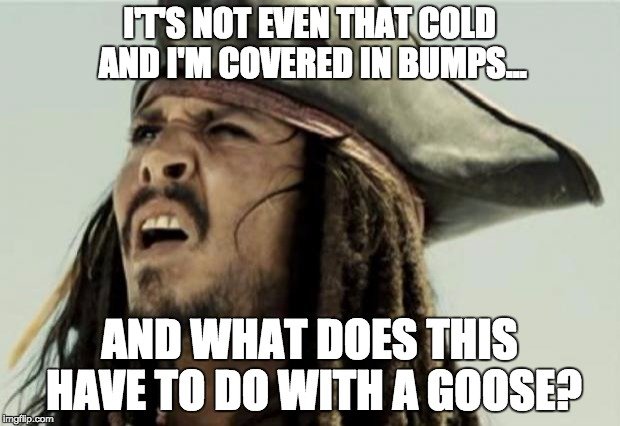 Short Answer: Goosebumps are caused by the body’s fight-or-flight response to a perceived threat. When the body perceives danger, either physically or physiologically, it will tense up the muscles and cause the hair on our arms to rise, along with those legendary goosebumps.

Goosebumps Are a Good Thing

While it may not seem like goosebumps provide much protection against physical danger or the environment, the fact that goosebumps have appeared on your body is a good thing. It means that your reflexes are working normally. More specifically, it means that your pilomotor reflex is functional, which is the scientific name for the phenomenon of goosebumps. Essentially, the pilomotor reflex is a part of the fight-or-flight response, which is what animals undergo when they feel threatened in any way. It causes a flood of adrenaline in the body, which can help animals and people prepare to fight (defend themselves, etc.) or flee (run away).

Now, goosebumps don’t only occur when you feel that your life is in danger or when you’re about to run away from something. It can also be caused when experiencing strong emotions of love, surprise or nostalgia. Even thinking back to old moments filled with powerful memories can cause goosebumps. In many ways, the body doesn’t differentiate between strong emotions, and merely flicks a switch for fight-or-flight preparation.

When this adrenaline surge hits in a human, it can cause an unconscious tensing of the tiny musculature that is attached to each hair. The flexing of these minuscule muscles tugs the skin a bit tighter and causes those tiny bumps at the base of the hair to be exposed. The most common places to experience the pilomotor reflex is the back of your neck, legs and arms, as these are the most frequently exposed areas of skin (that have hair) and the sensation of those rising hairs can be quite strong.

The Origins of Goosebumps

If you think humans are special because they occasionally get goosebumps, think again. The pilomotor reflex is something that has been handed down to humans over the course of evolutionary history. Many other animals experience this reflex of the skin when they feel threatened or endangered in some way. For hundreds of millions of years, animals have been relying on goosebumps to keep them safe and help them defend against predators.

The fundamental purpose of the pilomotor reflex is to change the orientation of hair on an animal’s body. When the goosebumps appear, animals with a thick mane of hair suddenly increase the amount of air between their skin and their hair. This air acts as insulation, which keeps animals warm during the cold winter months. Therefore, when an animals begins to feel cold, its body reacts with adrenaline to defend against the threat, making the hair stand on end and boosting insulation so the animal doesn’t freeze. 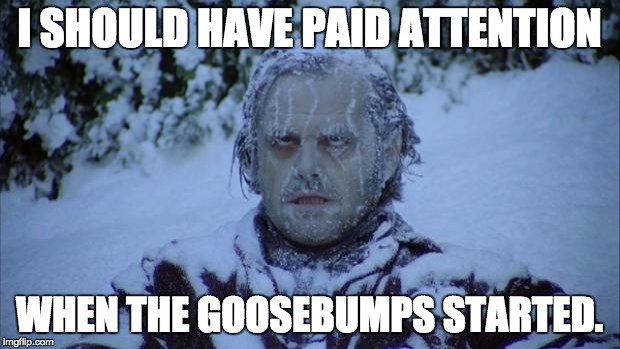 The other vital function of the pilomotor reflex is for defense. When an animal feels threatened or afraid, or forced to fight a predator or rival, the burst of adrenaline causes their hair to stand on end, which makes them look larger to their opponent. In some cases, this can be enough to avoid a fight or scare their opponent enough to give them to make an escape. If you’ve ever surprised your cat while it was napping, you’ll notice how puffy its tail immediately gets – the pilomotor reflex in action!

While these basic functions of goosebumps don’t help human beings much (minimal hair coverage and low levels of naked fighting), at least the next time you feel that tingle on the back of your neck, you’ll understand exactly where it comes from!