The act of scratching results in an increase in the flow of blood to the area, while also releasing serotonin, which subsequently eases the muscles being physically stimulated.

We have all spent days staring at the computer screen with stiff backs, holding awkward positions without realizing it. Unconsciously, we move our fingers across our backs in motions similar to those of scratching. In no time at all, we’re scratching our backs, our eyes closed, experiencing what can only be called a ‘temporary paradise’. This makes us feel so relieved that it is a legitimate struggle to get back to the spreadsheet on the screen.

Have you ever realized how this tiny little scratching action, even devoid of an itch, causes you to feel much better than you did 60 seconds ago before you unknowingly started scratching your back?

Why do we scratch?

Scratching is nothing more than a reflex to get these irritants off our skin.

Tiny particles are floating around us as well as insects and smaller animals that irritate the skin. This activates certain sensory neurons called pruriceptors in the skin, which result in an itch.

Scratching is also a mind game and contagious, much like yawning. Studies have shown that people tend to scratch themselves when they see others doing it. You might even feel an itch and the urge to scratch it as you read this article. 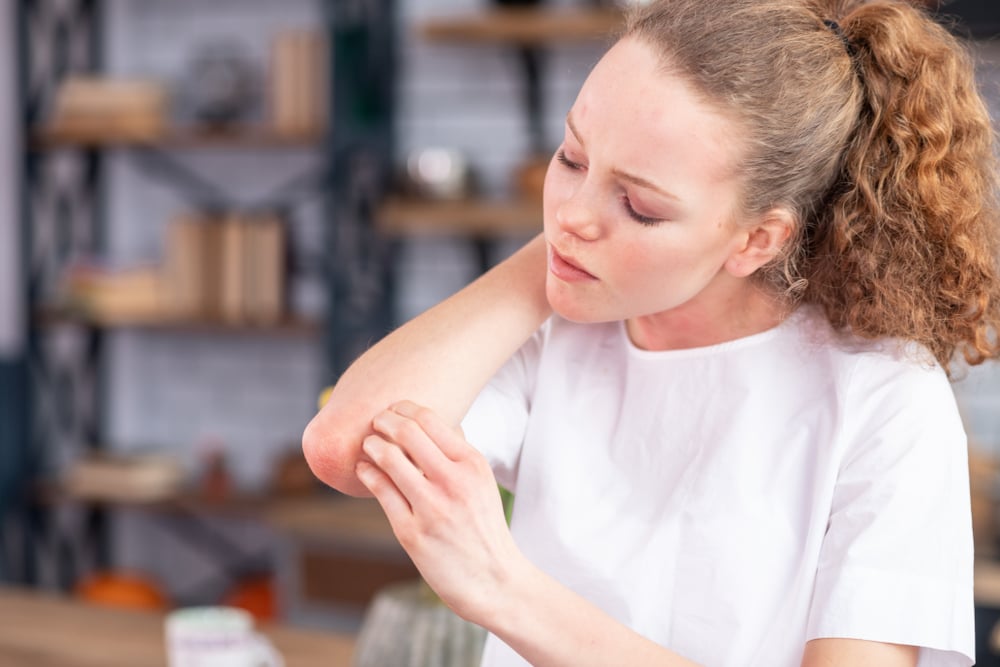 What happens when we scratch our skin?

There are several ways our brain senses and responds to an itch.

Whenever irritation or uneasiness occurs on the skin, mast cells are recruited to that area. Mast cells are immune cells that release histamine, which is involved in triggering inflammatory responses. The action of histamine causes the dilation of blood vessels, which in turn causes increased blood flow at the site of action.

All these changes are sensed and taken up by the nociceptors or pruriceptors. These impulses are transmitted to the spinal cord. The spinothalamic tract carries these impulses to the brain, which is how the brain learns about the itch. It then commands the motor neurons to produce the scratching action to calm the annoying little itch.

The physical action of scratching is a pain-inducing one. While scratching, our fingernails cause pain to our skin below our pain threshold so that it does not hurt. The slight pain acts as a temporary distraction to the irritated area of our skin. These pain impulses are sent to the spinal cord and eventually to the brain. To cope with this mild pain, the brain then releases the neurotransmitter serotonin.

Serotonin is often considered the “happy hormone” because it gives a positive feeling. Of all the many functions serotonin performs, “mood regulation” is an important one. The whole act of scratching leads to an increase in serotonin levels in our body. Higher serotonin levels lead to a more positive state of mind. As a result, we feel satisfied after scratching our skin. The heightened feeling makes us feel so good that we want to continue scratching so that the brain can secrete more serotonin. So it is the feeling of contentment that makes us want to scratch the itch even more. 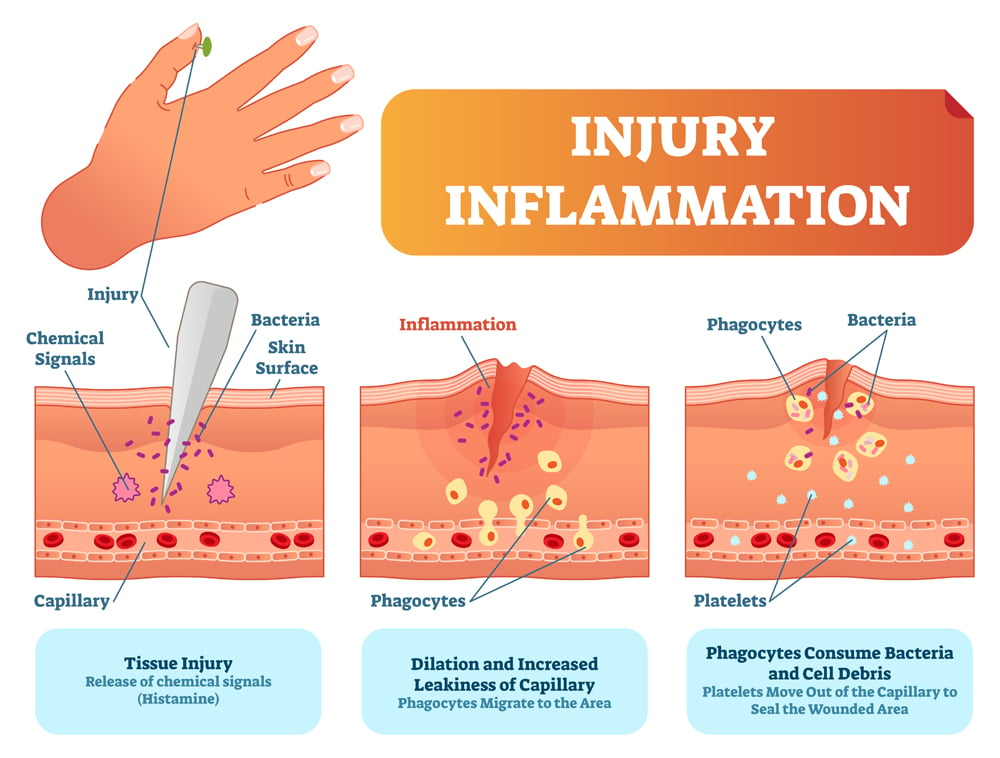 Activation of an inflammatory response caused by a pathogen (Photo Credit: VectorMine/Shutterstock)

Activation of the Reward System

The release of the neurotransmitter serotonin is just the trailer to a much longer movie. Recent studies have shown that non-pathological scratching activates the reward system, a pathway activated by positive stimuli. The actions of this pathway convey a positive feeling. Eating tasty food and listening to your favorite music are just a few stimuli.

It has been observed that scratching not only diminishes an itch but also makes it rewarding and addictive. The Itching-scratch cycle is a complex process involving sensory, motor, and emotional components.

Studies carried out on human subjects showed that scratching activated the ventral tegmental area (VTA), substantia nigra (SN), raphe nucleus, and periaqueductal gray (PAG). The ventral tegmental area (VTA) and substantia nigra (SN) are the main components of the reward system. PAG is an anatomical and functional structure between the forebrain and the lower brainstem that plays an important role in pain modulation.

The raphe nucleus is a cluster of nuclei (cluster of neurons) found in the brainstem that produces serotonin, which helps explain why serotonin is released by scratching. The mentioned areas in the brain light up during scratching. As these areas strongly correlate with pleasure scores, scratching conveys a sense of satisfaction. 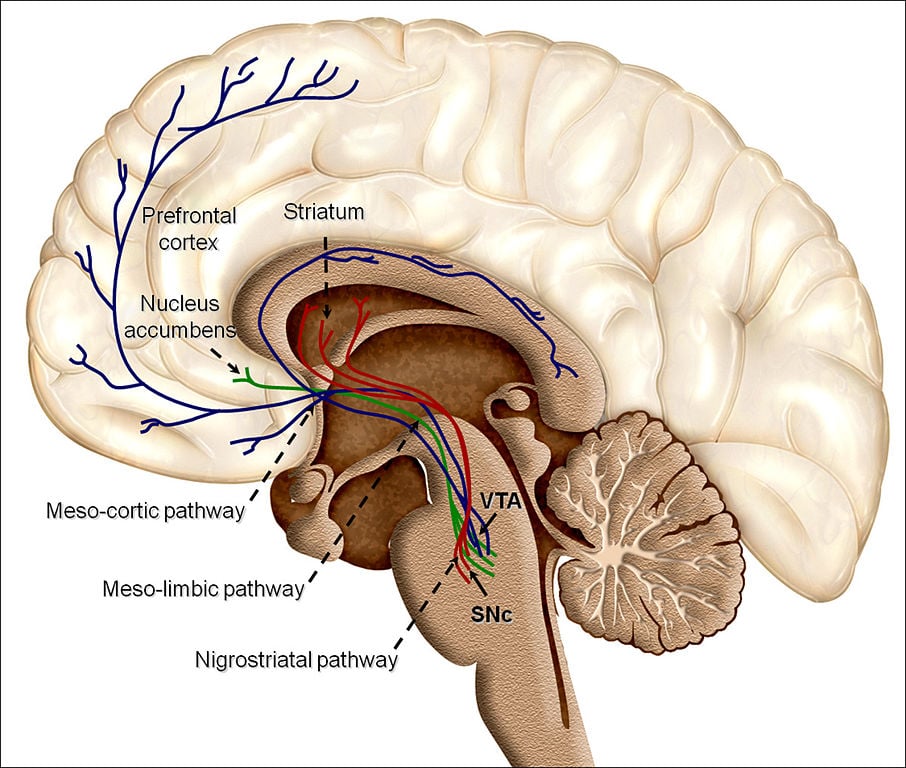 The magical effect of scratching your back 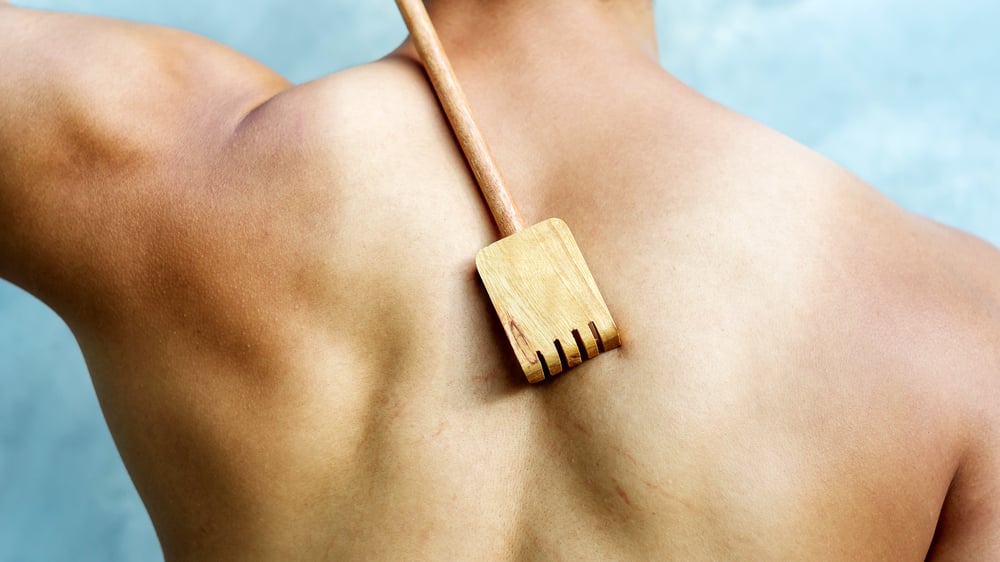 Man scratching his back with a back scratcher (Photo Credit: Supaleka_P/Shutterstock)

At some point, we have all come across adverts for back scratchers. It will often depict people seeking immediate relief by using these remedies. As comforting as the thought may seem, the science behind instant back relief is interesting.

Modernization has led us into a very sedentary lifestyle, which means that we have to deal with new problems. Our lifestyle is becoming more stressful every day. These stressors have an unconscious impact on our bodies. Of the many parts of our bodies that are an easy target for stress, the back an important one.

Stress has different effects on our back muscles. The most common effect is the constriction of the blood vessels, which limits blood flow. This leads to tension and stiffness in our muscles. Lack of exercise or sitting in your chair for long periods of time can also lead to stiffness and muscle cramps. Thus, we can imagine that our back becomes a deep reservoir of tension after a long working day.

Scratching your back at this point, even without an irritant, leads to a whole cascade of reactions. Of all the actions, the most fruitful is the increased blood circulation and the release of serotonin. Increased blood circulation eases the tension. The mechanical act of scratching acts on the pressure, and of course, the slight pain caused by the action leads to the release of the “happy hormone” serotonin.

However, it is well known that all the scratching via the reward system produces a positive reaction, which is why you feel wonderful after scratching your back, as it helps relieve pressure.

So scratching your back is like a ‘mini-massage’ that temporarily relieves any tension you might feel. So, the next time you get tired but are still tied to your desk, you know exactly what to do!

Do you remember why it feels so good to scratch your back?