Mitochondria are organelles found in eukaryotic cells. Their primary function is to produce ATP through aerobic respiration. Mitochondria have their own DNA and are believed to have originated from aerobic bacteria that occupied primitive eukaryotes.

When we switch on the fan or the lights, it’s natural to think about where the energy for these appliances comes from to work. The answer easily comes to mind; it’s the power plants stationed in our city or state. In the same manner, when we lift some weights or go for a run, do we know where that energy comes from? Now, unlike cities, which have a centralized source of power, our individual body cells have their own sources of energy. This source is the mitochondria and every cell has a lot of them.

Mitochondria are known as the ‘Powerhouse of the cell’. Their immediate function is to convert glucose into ATP (Adenosine Triphosphate). ATP can be considered the ‘currency’ of the cell. It is the basic unit of energy that is required to power the chemical reactions in our body. The process of this conversion is known as aerobic respiration and it is the reason why humans need to breathe oxygen. 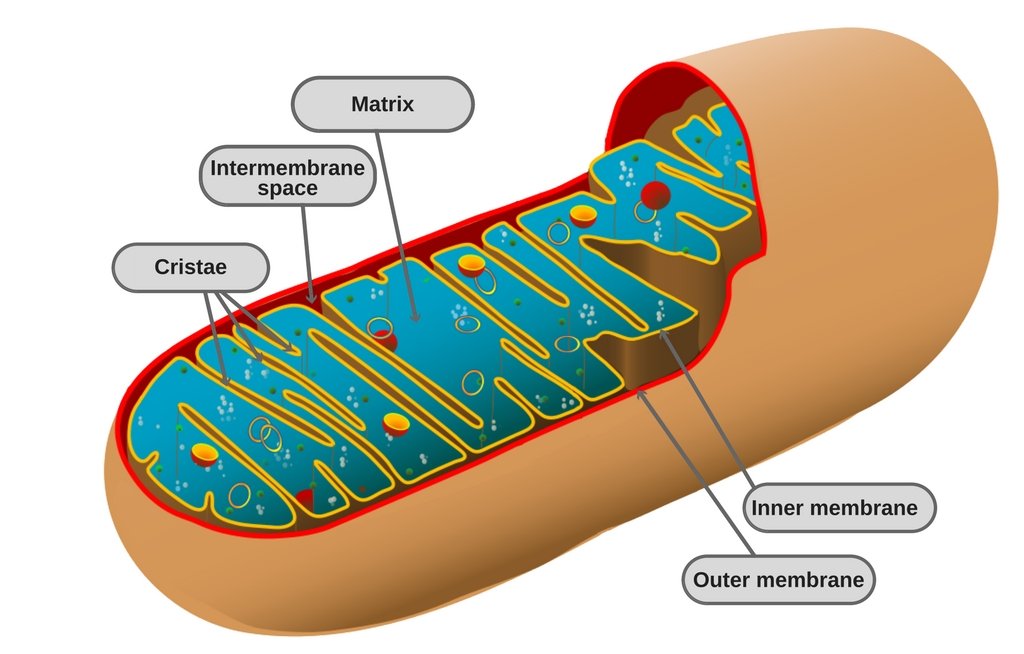 Mitochondria have no constant shape and size, but the overall structure remains same, which is rod-shaped. Their size varies between 1 and 10 micrometers in length. Their number in each cell varies according to the metabolic activity of each specific cell. The structure is very simple, with four different compartments. It has a smooth outer membrane and a highly convoluted inner membrane. These convolutions give rise to cristae. Then it has an inter-membrane space, and finally, we have the matrix in the interior.

A cell organelle with its own DNA?

Mitochondria are different from all the cell organelles, as they have their own set of DNA. They are extremely interesting, as even though they are cell organelles, they actually never started as one. Scientists hypothesize that mitochondria were aerobic bacterial cells that at some point occupied primitive eukaryotes and were able to resist the digestive enzymes. Over time, they developed a symbiotic bond and added oxidative metabolism to the eukaryotic cells. The bacterial cell then gradually evolved into the mitochondria.

What’s even more interesting is that it can even reproduce independently of the cell. The DNA and ribosomes are located in the matrix. It also has a set of enzymes present that help it in carrying out its function.

What is the Function?

Even though its main function is to generate ATP, it has a number of processes going on inside it. These processes include pyruvate oxidation, the Krebs cycle and the metabolism of various biomolecules. The ATP production takes place via aerobic respiration, which consists of glycolysis, the citric acid cycle, and the electron-transport chain. This happens in the inner membrane of the mitochondrion.

What is Aerobic Respiration?

Now that we know what produces the energy, the next question is how mitochondria produce that energy. The process of aerobic respiration is responsible for providing energy to the cell. This energy is produced via certain steps. They are glycolysis, the TCA – Tricarboxylic acid cycle (Also known as the Kreb’s cycle or Citric acid cycle) and the electron transport chain. The pathway produces 36 ATP for every glucose molecule.

Glycolysis is a process of catabolism, which means the breaking down of a larger molecule into smaller ones. One glucose (6 carbon atoms) molecule is broken down into two pyruvate molecules (3 carbon atoms each). This process uses two ATP to produce four ATP and two NADH.

Before we enter into the next step, one small change must take place. The pyruvate molecule is oxidized. It loses one carbon atom in the form of carbon dioxide and forms a 2-carbon acetyl group. It is then attached to a Coenzyme A. This process produces 2 NADH. Now we can continue with the process.

Initially, the 2-carbon acetyl co-A is combined with a 4-carbon oxaloacetic acid to form a 6-carbon citric acid. The cycle involves 8 enzymatic reactions of oxidation and decarboxylation, which leaves the 6-carbon citric acid back in its original 4-carbon oxaloacetic form. During this process, two carbon dioxide molecules are released. Only one ATP is produced, along with three NADH and one FADH2.

Now, this is the actual part where the term ‘aerobic’ makes sense. This step in energy production is why we need to breathe oxygen. The NADH and FADH2 that were produced in the previous steps are oxidized to form NAD+ and FAD (These are electron carriers. NAD is also a coenzyme, while FAD is a redox cofactor). Hydrogen (which consists of one proton and one electron) passes through the ETC, which consists of many electron carriers. As the electron passes through the chain, the protons (H+) are pushed out into the inter-membrane space. Once the electrons have exited the chain, they are accepted by the oxygen atom to form an O–.

Now, if we observe, the electrons exit into the matrix while the protons remain in the inter-membrane space. Therefore, this creates an electrical gradient across the inner membrane. In addition, the high concentration of H+ on the outside changes the pH (the higher the H+, the lower the pH, i.e., the pH will be acidic) and creates a pH gradient. Thus, to create a balance between the two regions, H+ needs to travel back into the matrix. It cannot travel directly through the membrane. There are special membrane channels, which allow the transfer to take place. This is where the ATP production takes center stage! The ATP synthase enzyme is coupled to these channels. The high-energy diffusion of H+ drives the combination of ADP and P to form ATP. This process gives us a total of 32 ATPs. The H+ combines with O– to form H2O.

Mitochondria break down lipids, proteins, and nucleic acids as well. They catabolize lipids (triglycerides – the storage form of fats) int0 glycerol and fatty acids. These two are then used for energy production. Proteins are broken into amino acids, but the use of amino acids for energy production is not very efficient. It only takes place in starving situations. In the case of nucleotides, DNA is never catabolized, while RNA can be. They are broken down into sugars and nitrogenous bases. However, even this is limited to uracil and cytosine (pyrimidine bases). The rest is excreted out in the form of urea. Typically, they are recycled to make new nucleic acids.

Evolution has led to the marvelous development of mitochondria. The high efficiency of the pathways makes energy production extremely easy. The step-by-step process also gives us the ATP – energy currency – in a properly managed manner!