Simply put, a nucleus is a membrane-bound organelle found in all eukaryotic cells that contains the genetic and chromosomal information of an organism. The nucleus holds the mitochondrial DNA that is required for a cell to replicate and for an organism to grow

Anyone who has ever studied the human body understands that every individual part plays a key role, serving a critical purpose that keeps us running and maintains our overall health. This applies to the large scale as well as the microcosmic level. From our pair of inflatable lungs to the microscopic organelles in every single one of our cells, the anatomy and physiology of human beings is remarkably interconnected and complex.

However, some elements of life are more critical than others, or at least sit closer to the center of the action. This is certainly true of the nucleus, which physically sits at the center of every single cell in our body, and every sing cell of each organism on this planet. Clearly understanding what this organelle does, and why it is so important, can provide a bottom-up understanding of life itself!

What Is A Nucleus?

Simply put, a nucleus is a membrane-bound organelle found in all eukaryotic cells that contains the genetic and chromosomal information of an organism. The nucleus holds the mitochondrial DNA that is required for a cell to replicate and for an organism to grow. 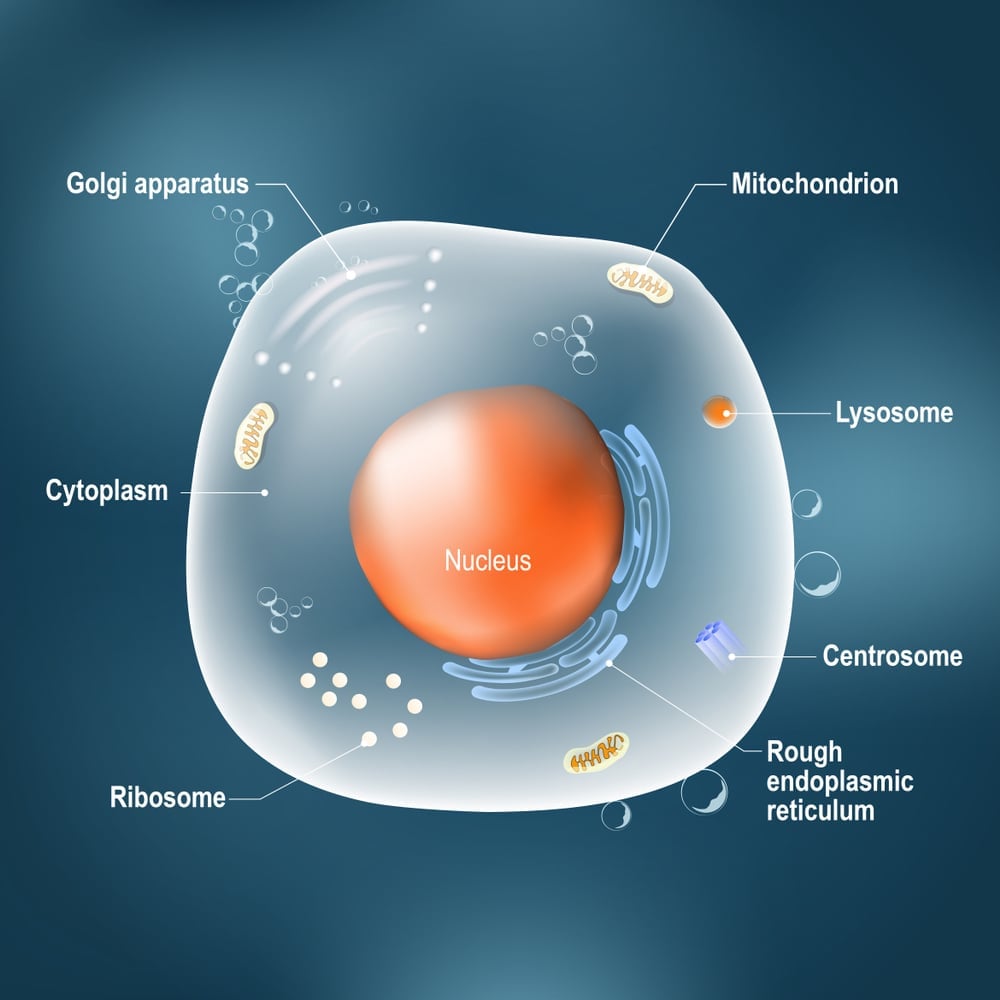 In combination with various proteins, this mitochondrial DNA is formed into chromosomes. Sitting in the center of a cell, the nucleus is bound in a double membrane, the nuclear envelope, which separates it from the rest of the contents of the cell, including the other organelles. 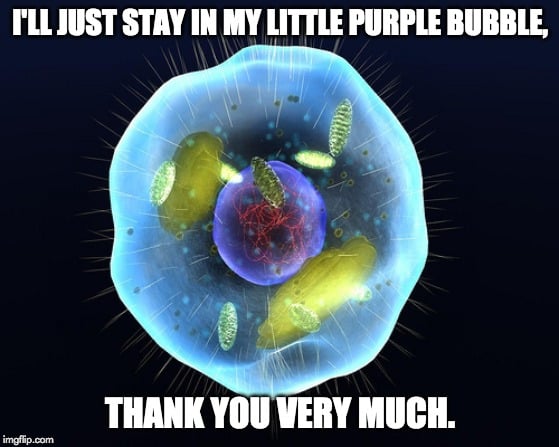 The nuclear envelope acts as a barrier, allowing only certain molecules through the nuclear pores, and maintaining the shape of the nucleus. This regulation of movement is done with the help of carrier/transport proteins on the surface of the nuclear envelope. The nucleus is filled with nucleoplasm, a similar gelatinous substance to the cytoplasm that fills the rest of the cell.

This fluid facilitates the movement of molecules and all genetic activity within the nucleus. Considering that the nucleus contains the majority of genetic material (chromosomal DNA and other proteins), the nucleus also regulates genetic expression, earning it the reputation as the “brain” of every cell.

Also Read: What Is Nucleoplasm?

A nucleus also contains a nucleolus, which is essential for protein synthesis (and will be explained fully below), as well as connections to the endoplasmic reticulum and the general cellular infrastructure, allowing it to maintain control and regulation of all cell activities. In short, a nucleus is the enclosed “control center” of a eukaryotic cell.

Function Of The Nucleus

“Cellular activity” is a rather vague term, however, and considering that a nucleus is the “brain” of a cell, that activity deserves some explication. Similar to human beings and their brains, without a nucleus, a cell would be unable to function and would immediately perish. That being said, the basic purpose of a nucleus is to provide a space for DNA replication and to control gene expression within the cell. How it does this is complicated, but important to understand.

The nucleolus, mentioned above, is an oft-overlooked part of the nucleus, but this is where the majority of the cellular “magic” occurs. 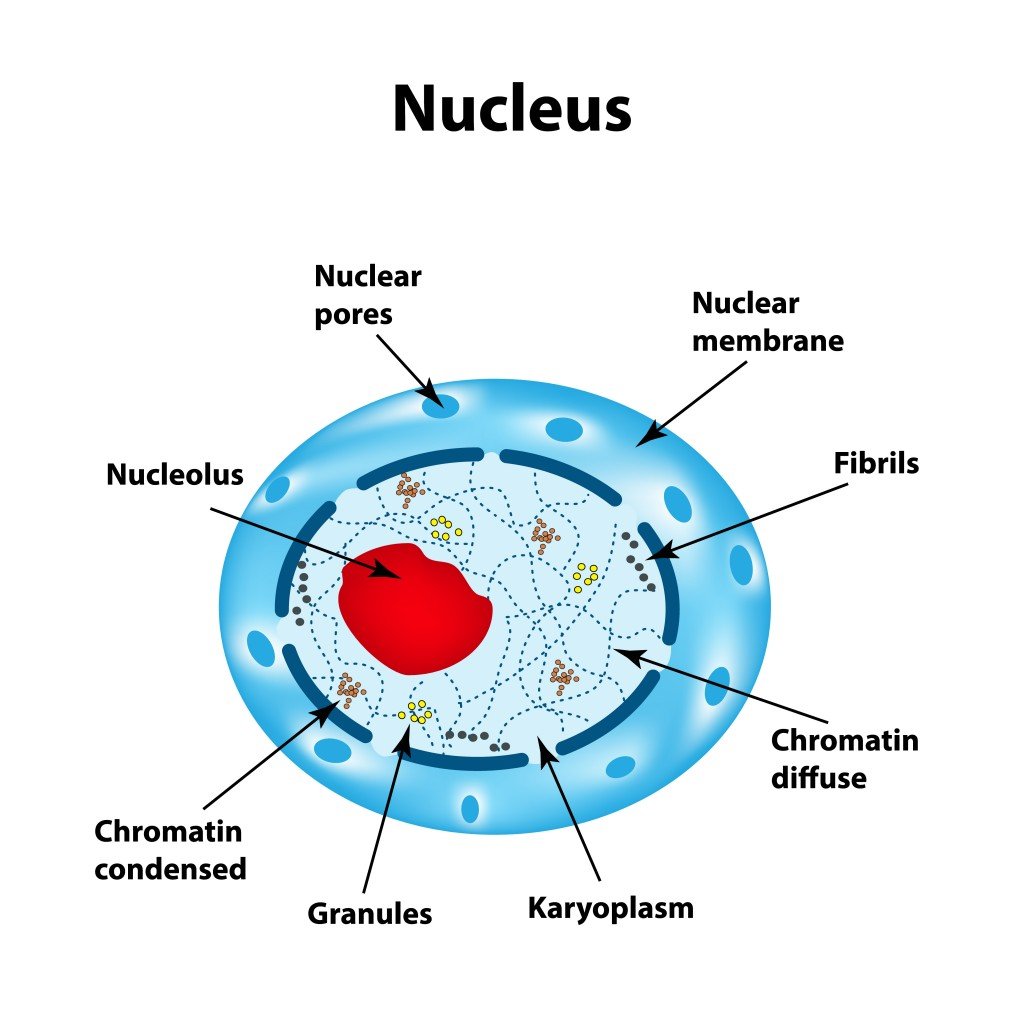 The nucleolus is a dense structure in the nucleus composed of proteins and RNA. This is the site where RNA is synthesized and ribosomes are created. Ribosomes will then be moved out of the nucleus into the cytosol of the cell, where they play a key role in protein synthesis by translating mRNA either on the endoplasmic reticulum or as freely moving ribosomes. Not only are the ribosomes created in the nucleolus, but messenger RNA (mRNA) is also produced there, which is a transcribed DNA segment. This mRNA is then moved out into the cytoplasm, where it is transcribed by tRNA and ribosomes to synthesize proteins, all according to directions from the nucleus!

Holding and protecting the cell’s genetic material is the most important function of the nucleus, as this chromosomal DNA controls which genes are expressed, and which proteins are synthesized, essentially directing all activities that go on in the cell. This is why a cell cannot survive without a nucleus; in its absence, there would be nothing “pulling the strings”, per se. When a cell is not dividing, the chromosomes are organized into long strings of chromatin, whereas they will solidify and tighten into chromosomes during cell replication. Between cellular divisions, the genetic material will be replicated within the nucleus, an essential step before a cell can divide. 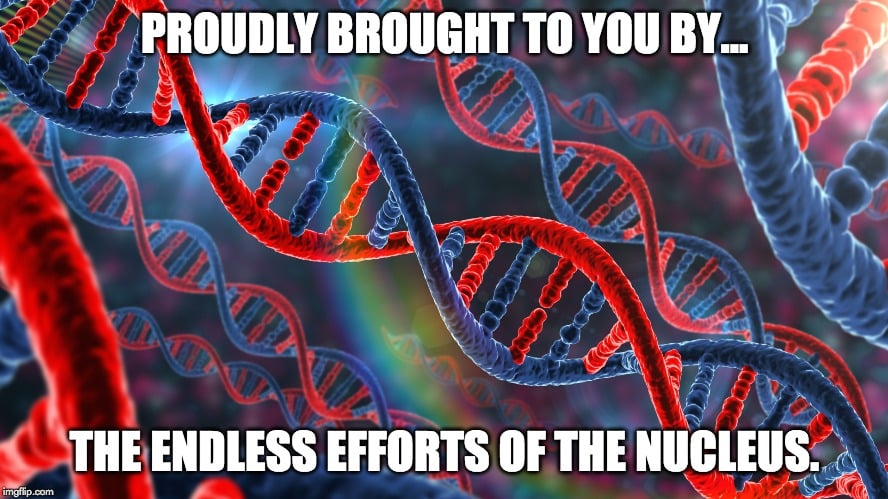 Other Functions Of The Nucleus

Controlling genetic expression and protein synthesis, along with protecting a cell’s genetic material, are the main purposes of the nucleus, but there are some other overlooked elements of this organelle. The structural framework of the nucleus is composed of lamin proteins, specialized proteins that serve multiple purposes throughout their life. When a cell is healthy, they provide structure and stability for the nucleus, but when a cell ceases to function efficiently, or becomes deficient, the lamin proteins also trigger the beginning of apoptosis (programmed cell death), in order to protect the larger organism.

Also Read: What Is The Difference Between Prokaryotic And Eukaryotic Cells?

There are other nuclear bodies aside from those discussed at length above, including those with exotic names like PML bodies, Cajal bodies, Splicing Speckles and clastosomes. The specific functions of these largely unstudied nuclear bodies are typically related to pre-mRNA processing and transcription, DNA replication, and nucleoplasm regulation. The details of these nuclear bodies goes beyond the scope of this article, as many of them are still being researched.

While most people are familiar with the term “nucleus”, and realize that it is an important part of any cell, the specific functions and responsibilities of the nucleus are often misunderstood. It is more than a storage space for DNA, and it does more than call the shots for the cell; the nucleus is the treasure at the center of the labyrinth, the complex and tireless engine driving all cellular function. Without the nucleus, enclosed in its protective envelope, the level of genetic complexity enjoyed by eukaryotes would be impossible, meaning that humans would never have reached the point where we could study this fascinating and critical organelle!