Centrioles are cell organelles that help in distributing genetic material during cell division. Research is still ongoing to determine whether we can survive without them.

The cell is a very complex entity. It is the smallest known entity capable of sustaining life in itself. The entire dogma of biology and its related fields revolves primarily around the study of this basic building block of life. As you might expect, a lot of research has gone into understanding the cell, its functions and its organization.  As such, today we know about all the different sub-units present in the cell. Centrioles are one of the lesser-known of these.

So, what is a centriole and what is it doing inside the human cell? What role does it play in the cell division process? Can a cell survive in the absence of centrioles?  These are some of the questions that we will be trying to answer below.

The cell is composed of many different organelles. To understand these concepts better, consider the cell like the human body, and the organelles are like the organs. Just like every organ inside of us, the organelles present in cells each have their own unique functions and characteristics. These micro-units are highly specialized and their structure directly corresponds to the tasks being performed by them. 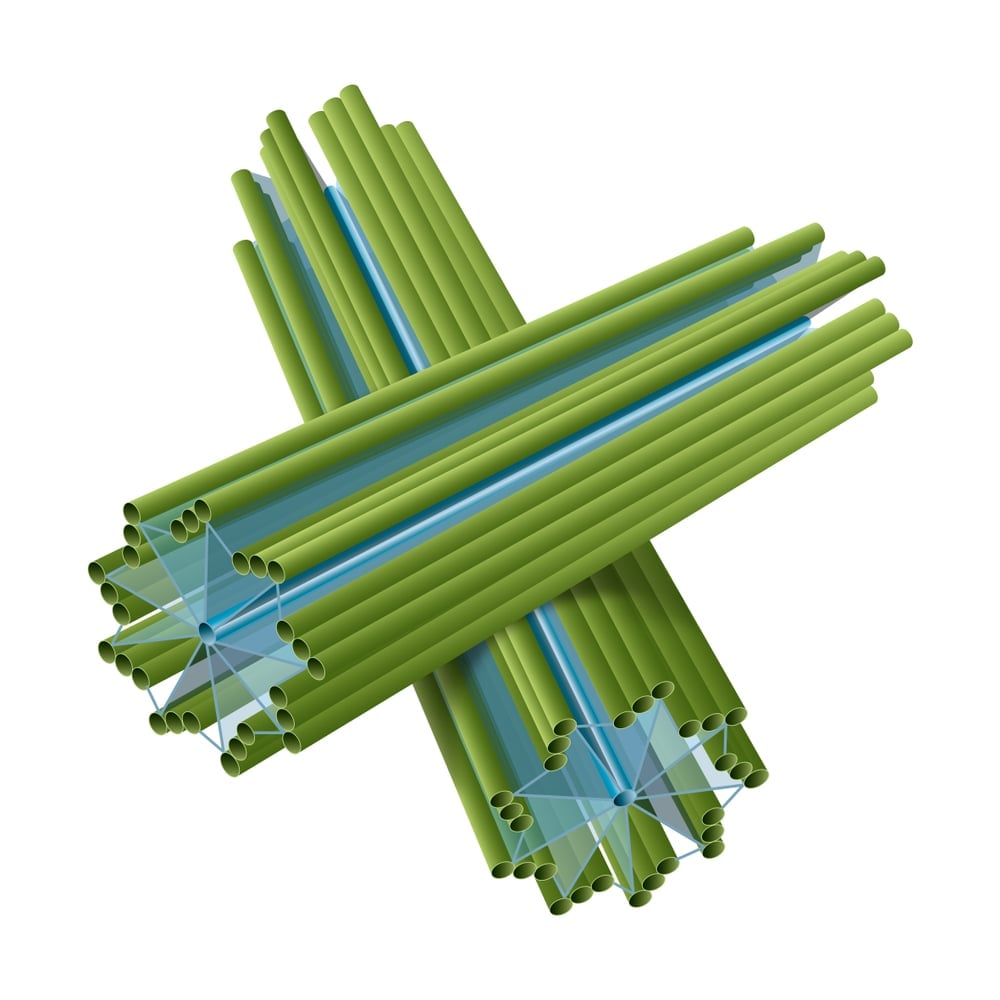 Centrioles are one of the many organelles present inside a eukaryotic animal cell. They are cylindrical in shape with ridges present all over their surface. They are mainly composed of a globular protein called tubulin, which has two major components—α- and β-tubulins.

These two types of proteins bundle around each other and polymerize in a specific manner to form microtubules, which basically constitute centrioles. Microtubules, as their name suggests, are small tubes that group together and form centrioles. There are a total of nine pairs of microtubules in each centriole and as with every other cell organelle, the structure of centrioles is closely related to its function. We’ll discuss more on that shortly.

Every cell has two centrioles just before cell division begins. These are always stationed at right angles to each other. Once the cell divides, each centriole occupies the space inside one of the new cells and later divides to once again form a pair.

This cycle continues throughout the life of the organism. Centrioles are considered to be a part of a larger organelle called centrosomes. The centrosome is the main microtubule organizing center and it regulates the cycle of cell division.

Why are centrioles important for cells?

Centrioles play a very important role in the cell division of animal cells. Cell division is perhaps one of the most important biological phenomena occurring around us (and within us) that has led to the evolution and continuity of life. Cell life is pretty similar to ours.

When a new daughter cell is about to be born, it has no idea about the world or its upcoming duties. Thus, the mother cell provides it with manuals that have all the information about a cell’s life, structure and functions. The scientific name of these manuals is ‘chromosomes’.

However, once a mother cell replicates into a daughter cell, all of its resources are halved, and it is as new to the world as its daughter. Henceforth the mother cell is also called a daughter cell (only directly after the completion of the cell division process) and it also requires chromosomes in order to function. This where centrioles come in.

How do centrioles help in cell division?

Centrioles help the cells divide the chromosomes or the genetic material (material that holds information about the genesis of the cell’s life) equally between the two daughter cells.

During cell division, each centriole travels to the distant end of the cell. There, they help in the formation of the mitotic spindle. The mitotic spindle is a microtubule-organizing center that releases the spindle fibers towards the center of the cell. Fibers coming from the two directly opposite sites join and form a structure that looks something like this: 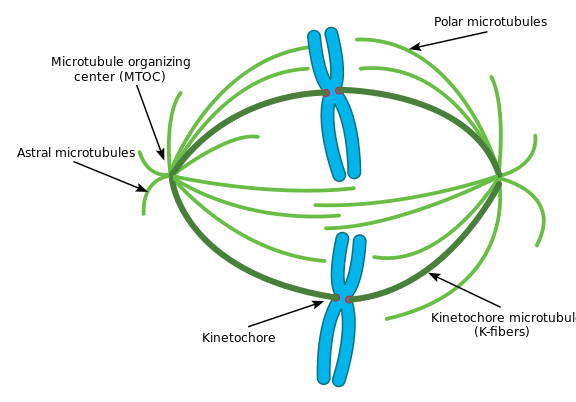 The chromosomes that have already duplicated (each chromosome contains two sister chromatids) join the spindle fibres via a disc-shaped protein structure called a kinetochore during metaphase of the cell cycle. In the next phase, the centrioles start to wind up the fibres by recalling them, pulling the chromatids apart.

As the sister chromatids are separated from each other, they travel to the two opposite ends of the cell, which later go on to separate into two different entities. In this manner, the genetic information and the code of life are passed on from one cell to another.

What is ciliogenesis and why are centrioles important for it?

There are certain organisms with hair-like structure coming out of their body called cilium and flagellum. These are protuberances suspended over the body of some microorganisms that helps them move or achieve certain sensory functions. The entire process of the formation of cilia and flagella is known as ciliogenesis. However, these projections can help only when they are placed in precise positions.

The position of these whip-like projections is determined by the mother centriole (the remaining primary centriole from which the two centrioles have originated). Centrioles act as the basal body or the holding structure for these projections. For most of the organisms that bear these protrusions, centrioles are an absolute necessity as they are responsible for developing the hair-like projections. Without cilia and flagella, the motion and food detection of these organisms would get suspended as a result of which survival would look pretty bleak. 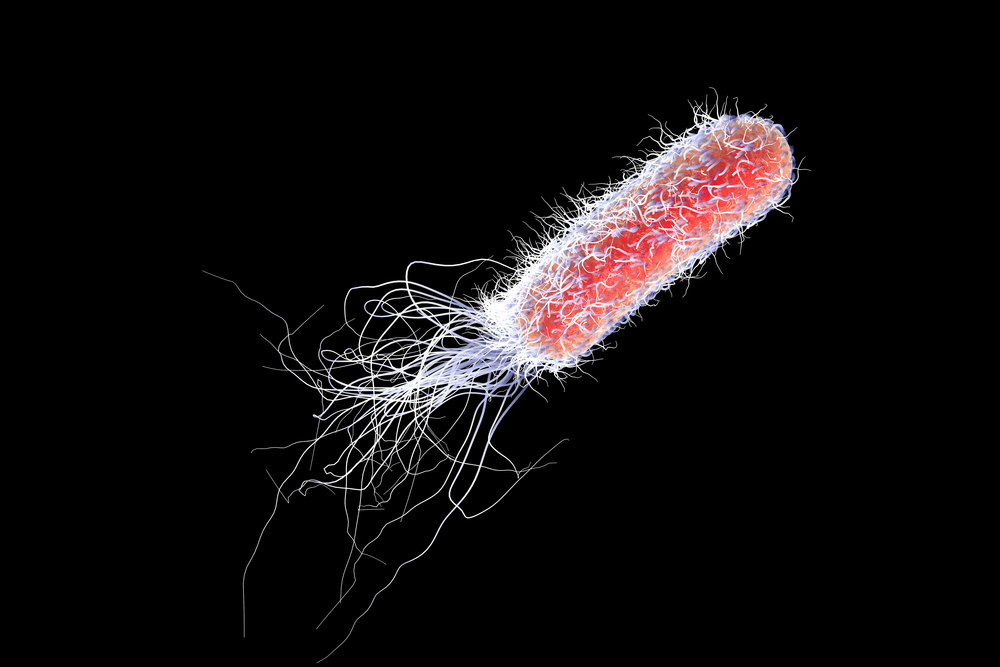 Cilia and flagella projecting out of a bacteria. (Photo Credit: Kateryna Kon/Shutterstock)

Can we do without centrioles?

The indispensable role of the centrioles in the cell is to organize the spindle during cell division and ensure a smooth division of the genetic information. Other than that, they also finalize the general flow of microtubule growth and control the protein traffic. However, many biologists today claim that certain protein structures present inside the cell are also capable of performing the tasks of centrioles, which makes them not so indispensable after all. 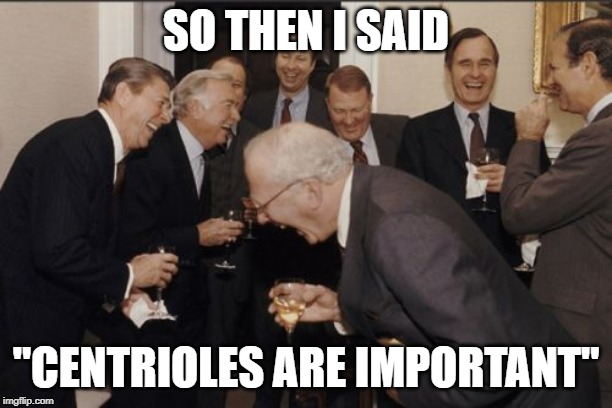 In some other recent developments, researchers experimenting on the somatic cells of fruit flies determined that the cells were able to divide even after the removal of their centrioles. However, the organisms didn’t last as long, as their neurons (nerve cells) were unable to develop the cilia necessary for functioning.

So, if we somehow find a way to develop cilium and flagellum without centrioles, can we survive without them?

Also, not all types of cells require these structures, so how do they manage without these organizing centers? These questions are highly debatable and extensive research is required to answer them. In time, we will surely determine just how important centrioles truly are for our survival!