Chromatin is a type of genetic material composed of DNA and proteins. It helps to pack the DNA into a small voluminous structure that can be contained within the nucleus. It condenses to form the chromosomes during eukaryotic cell division.

Cells are the basic functional units of life. The major component in a cell is the genetic material, commonly referred to collectively as the DNA. It contains hereditary information that is passed on from parent to offspring during cell division. The DNA is well organized in eukaryotes and is present within the nucleus. Chromatin plays a major role in wrapping up the genetic material and housing it within the cell nucleus, but what exactly is chromatin? What is it composed of? What are its types? What role does it play in cell division? How are chromatin, chromosomes and chromatids related? These are just a few of the questions we will be trying to answer in this article.

The DNA of prokaryotic cells posses a minimal amount of information, so it is simply distributed in a circular form over the cytoplasm. However, the DNA of eukaryotes contains millions of pieces of hereditary information. Therefore, it’s important to organize them properly in order to fit into the nucleus. Chromatin is a way to organize the genetic information to form the blueprint of life. It helps to pack the DNA into a small volume, so that it resides within the nucleus, with all the genetic information contained safely. It prevents the DNA from becoming tangled and plays a major role in reinforcing the DNA during cell division by regulating gene expression, facilitating DNA replication and preventing damage. What Is Chromatin Composed Of?

Chromatin is composed of two main parts, namely the DNA and the binding protein histone. Histone is an octomer composed of four sub-units that repeat twice. Histone acts as an anchor around which DNA is coiled. There are about 147 base pairs of DNA that wrap around the histones, forming nucleosomes. These nucleosomes are interconnected by sections of linker DNA. Histone can be classified into two types:

H2A, H2B, H3 and H4 are the core histones. H1 is the linker histone that controls the entry and exit of a DNA strand on nucleosomes. Chemically, chromatin is composed of 30-40% DNA, 1-10% RNA and 50-60% proteins. This composition varies from one organism to another, in different tissues of the same species and in every stage of the cell cycle. This leads to the formation of more and less condensed regions within the structure. Chromatin can be broadly classified into two types, based on its condensation:

Hetero-chromatin is a stable yet dynamic structure that varies from one cell to another. It is very tightly packed and has a highly condensed form. Being a repressive structure, it is inhibitory to the expression of genes within it. Higher order structures are formed by repetitive folding, which in turn increases the negative super-coiling of DNA. Within the hetero-chromatin, there are DNA structures called barriers that allow the expression of nucleosomes. Accessing the DNA is quite tedious in this form.

Eu-chromatin consists of structures that are loosely packed. Modification to the histone tails allows them to be more open. This enables the easy access of DNA within these structures. It’s main function is the initiation of transcription. Eu-chromatin is actively involved in the transcription of DNA into mRNA. It also allows the recruitment of RNA polymerase complexes and gene regulatory proteins. The productivity of a cell is directly proportional to the amount of Eu-chromatin present within the cell.

Both these forms play their respective roles in gene transcription. Also, under necessary conditions, Eu-chromatin can be transformed into Hetero-chromatin. The cell cycle and other such processes use this ability to regulate the transcription of different genes.

Role Of Chromatin In Cell Division

Cell division is a process in which DNA produces multiple copies of itself, which can then be passed on to the next generation.  During cell division, chromatin forms a more complex structure called a chromosome. These structures are visible only during mitotic cell division.

This process takes place during the prophase of cell division. After prophase, two sister chromosomes are formed that remain attached to each other at the centromere. These sister chromosomes are called chromatids. To transcribe DNA into mRNA, or for the production of proteins, access to the DNA is essential. Since it is tightly wrapped around the histone, chromatin remodeling can be done to gain access to the desired segment of DNA where the gene is present.

Also Read: What Are Sister Chromatids?

In many events of cellular life, secondary structure of DNA is very important. Processes such as replication, transcription and regulation of expression of genes depend on the local changes in the DNA structure.

Recombination and specific mutations occur as a result of special changes in DNA. Chromatin controls all the above mentioned processes and  is also responsible for hereditary changes. 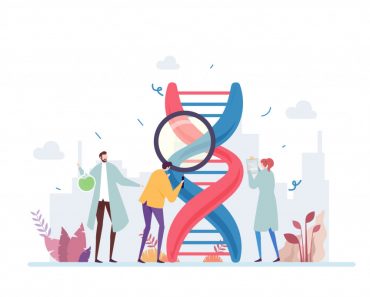