Hand sanitizers work by dissolving the cell membrane of the bacterium and then denaturing the proteins that are essential to bacterial life.

Thanks to hand sanitizers, all it takes is three easy steps to bid farewell to the germs on our hands. As a result, hand sanitizers have become the norm when speaking about hygiene. Billions of people around the globe regularly use them to keep their hands clean and safe. Mothers pass a sanitizer bottle to their kids after their play session and you probably (and hopefully) never leave a public washroom before using the available hand sanitizer.

One also finds these bottles on restaurant tables, attached to hospital walls and dangling from people’s backpacks in cutesy little bottles. The question is, how does this sparkly gel actually kill bacteria? 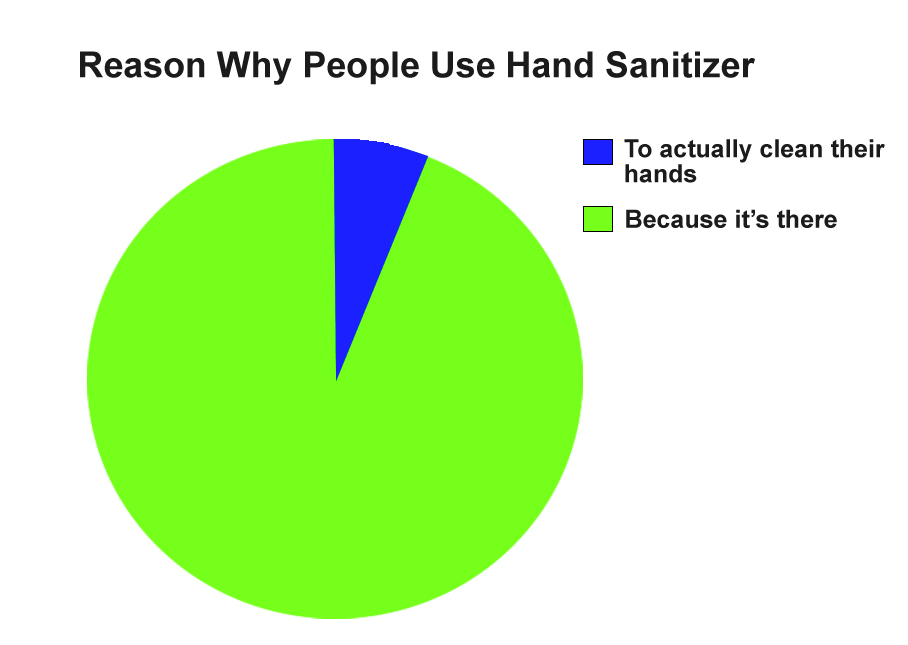 If you were to flip the bottle of your hand sanitizer and read the ingredients tab, you would find names such as isopropyl alcohol, ethanol/ethyl alcohol or propanol. Non-alcohol-based hand sanitizers contain antibacterial compounds, such as benzalkonium chloride or triclosan. These are the active components of hand sanitizers and are responsible for getting rid of those nasty bacteria.

Isopropyl alcohol is the same stuff used in rubbing alcohol, while ethanol is the key ingredient of the booze that you drink every Saturday night and propanol is nothing but a structural cousin to isopropyl alcohol. A hand sanitizer needs to contain somewhere between 60% to 95% of these alcohol compounds to kill any germs. A hand sanitizer with an alcohol concentration below 60% isn’t effective at killing germs. 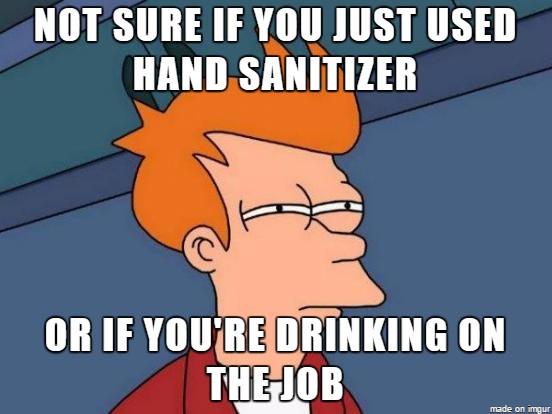 Since most hand sanitizers contain ethanol as the active ingredient, they are sometimes gulped by people looking for a cheap substitute for regular drinking alcohol. Manufacturers, therefore, add bitter-tasting compounds, such as aminomethyl propanol, to avoid such scenarios.

The active ingredient of hand sanitizers, i.e., alcohol, causes dry skin. Thus, ingredients such as glycerin, caprylyl glycol, and isopropyl myristate are used as conditioners to help prevent the skin from drying. Fragrances and polymers are added to provide a pleasant odor and a gel-like consistency, respectively.

How do hand sanitizers kill bacteria?

The disintegration of the cell membrane

The cell membrane of a bacterium is primarily composed of phospholipids. Phospholipids are a class of lipids containing two hydrophobic (water-hating & non-polar) fatty acids on one end, referred to as ‘tails’, and a ‘head’ that is hydrophilic (water-loving & polar) in nature. The phosphate group attached at the head makes it polar and hydrophilic. The two parts are ordinarily joined together by a glycerol molecule. 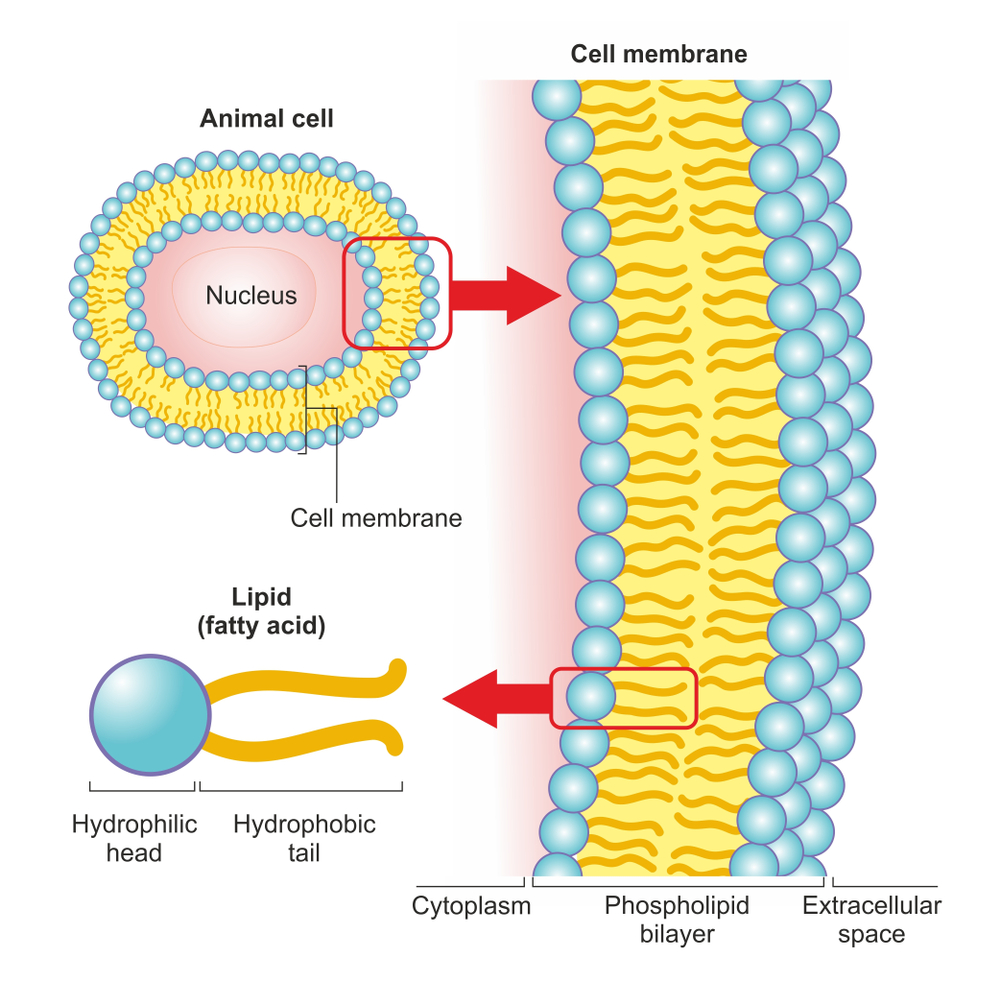 The interior of a cell and the exterior is mostly surrounded by water (polar compound), so the hydrophobic non-polar tails cower inside while the hydrophilic polar head lines the interior and exterior of the cell membrane. (Photo Credit : Soleil Nordic/ Shutterstock)

The tails might be hydrophobic, but they are also lipophilic (lipid-loving) in nature. Hand sanitizers exploit this lipophilic nature of the tails to disintegrate the cell membrane due to the “like dissolves like” principle. The non-polar tails dissolve readily in other non-polar compounds.

The organic solvents, i.e., propanol or ethanol, used in hand sanitizers are amphiphilic compounds, meaning that they contain both a hydrophilic part and a lipophilic (or hydrophobic) part. They are master solvents and can dissolve both polar and non-polar compounds.

Thus, as soon as the ethanol molecules in your hand sanitizer come in contact with the cell membrane, they bond with it and start dissolving the lipophilic tail. The membrane, therefore, loses its structural integrity and gets ruptured in a bunch of different places, spilling out the cell guts. In itself, this would cause bacterial death, as the cell organelles would ooze out, but hand sanitizers take it a step further by even denaturing the cell proteins.

You have probably read time and again that proteins are the key to life. Destroy the protein molecules and the life of the organism will follow. Denaturation is the breaking down of protein molecules by the application of external stress. External stress can be in the form of radiation, heat or chemical compounds, such as a strong acid or base, a concentrated inorganic salt or an organic solvent. Isopropyl alcohol, ethanol and propanol are all examples of organic solvents. 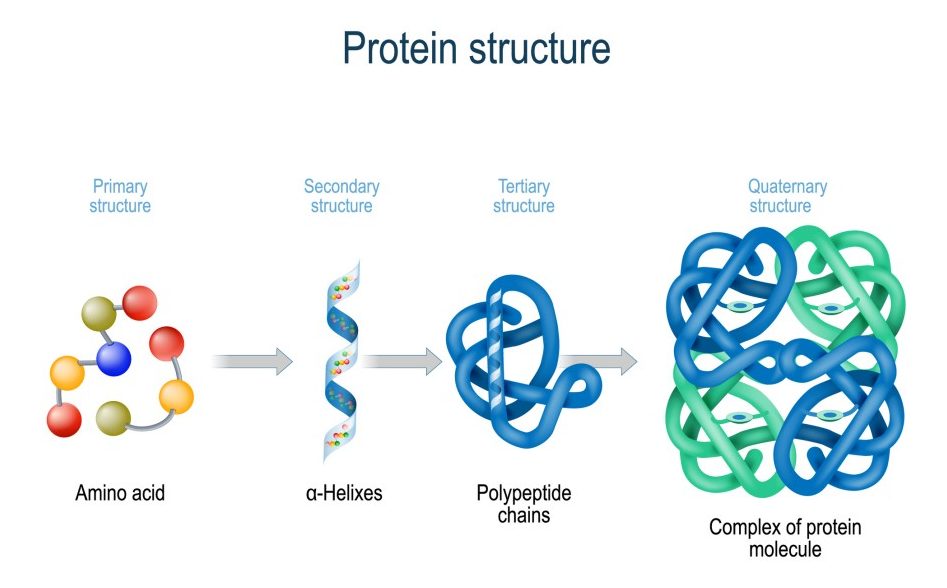 The structure of a protein plays a definitive role in deciding whether the molecule can properly perform its functions or not. Disturbing the protein structure in any way or manner would render them worthless and ultimately lead to cell death. 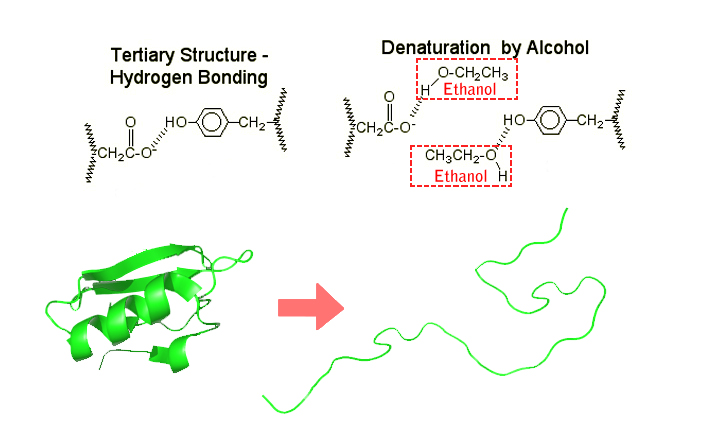 Ethanol breaks down hydrogen bonds between the side chains of the tertiary structure and thus, unfolds the protein molecule.

After weakening the cell membrane, alcohol molecules begin rushing in and breaking these hydrogen bonds. Once the new bonds between the protein molecules and alcohol are formed, the protein molecules lose their structure and, consequently, their functionality. As already established, without these proteins functioning, the bacterial cell ceases to survive and quickly dies.