People who are responsible for advertising and selling the product are more interested in the perception of the effectiveness of their product, rather than the actual percentage of its efficacy. So, they simply say that their disinfectant can kill 99.99% of germs, implying that it is as good as perfect, but never actually admitting that.

This is a string of text you have likely seen written on containers or labels of most (if not all) common disinfectants. Hand sanitizer, hand wash, soap solution, toilet cleaner, bleach… if it’s a disinfecting agent, it is highly likely that it advertises its ability to kill as much as… You may have seen this on most disinfecting liquids/products.

So, what’s the deal with this oddly unsatisfactory figure – 99.9%? Why don’t these disinfectants state on the label that they kill 100% of germs on which they are used? After all, 99.9% is as good as 100%, wouldn’t you say? Why do manufacturers choose to stick with a less-than-perfect figure of 99.9% and not a more convincing 100%?

There’s one other interesting aspect to all this – not all disinfectants claim a 99.9% effectiveness against germs; some say that they kill 99% of germs, some say they wipe out 99.9%, while some even claim that they can eliminate 99.99% of germs and pathogens on which they are used.

Looking at these numbers, the average consumer wouldn’t be at fault to assume that a disinfectant claiming an effectiveness rate of 99.99% against germs is better than one that claims a 99% effectiveness (since the former is 0.99% more effective than the latter). A product that says it will kill 99.99% of germs should, in theory, work better, right?

Not all disinfectants are the same!

You see, not all disinfectants are created equal. People generally assume that, since the end goal of all disinfectant products is to kill germs, they must essentially all be the same thing, and that they only vary in less important attributes such as color, fragrance, dilution ratio etc. In reality, however, this notion couldn’t be further from the truth. 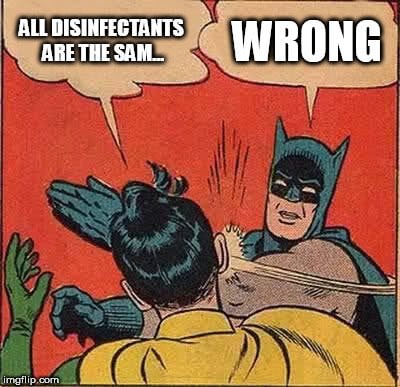 Contrary to popular belief, disinfectant solutions may differ from each other in many different ways; they may boast different chemical formulations and show varied results when used on the same kinds of germs and bacteria. They may also have different efficacy claims (meaning, claims of what they have successfully demonstrated an ability to kill) and dilution ratios.

The most common disinfectant solutions used for facility maintenance are composed of active ingredients like sodium hypochlorite (bleach), quaternary ammonium (quat), hydrogen peroxide, silver ions, alcohol or acids, iodine etc. Each of these have their own germ-killing characteristics, and when mixed with other compounds to be made into a solution, they may be effective on different strains of pathogens. Disinfectants are used to rapidly kill bacteria. They kill off the bacteria by causing the proteins to become damaged and the outer layers of the bacteria cell to rupture. The DNA material subsequently leaks out.
(Photo Credit : Wikimedia Commons)

For instance, certain compositions of disinfectants are found to be more effective against bacteria found in and around areas where food is cooked. Others work great against viruses like influenza and colds. There also exist ‘high-level’ disinfectants, which have a wide range of efficacies against antibiotic-resistant organisms; they are obviously quite popular in the healthcare industry.

All in all, disinfectants come in many different kinds and have varying rates of effectiveness associated with them. This is why they cannot be effective against all kinds of germs and pathogens that are known to us, nor should they be expected to.

The sentence “kills 99.99% of germs” is a marketing term, no doubt about it. This is a very smart way of telling consumers that a disinfectant can kill almost all the germs present in a particular area.

I’m telling you, the word almost can be quite the game changer in certain situations. You see, it’s not that a disinfectant actually kills only 99.99% of germs, while the other 0.01% escape; it’s quite possible that it kills 100% of germs with which it comes in contact (provided the disinfectant is effective against that particular kind of germs). It’s simply that the scientists evaluating the effectiveness of a disinfectant cannot claim with a 100% guarantee that a disinfectant will undoubtedly remove all germs due to the limited capacity for detection arising from the testing methods they use to test the efficacy of disinfectants.

People who are responsible for advertising and selling the product are more interested in the perception of the effectiveness of their product, rather than the actual percentage of its efficacy. So, they simply say that their disinfectant can kill 99.99% of germs, implying that it is as good as perfect, but never actually admitting that. 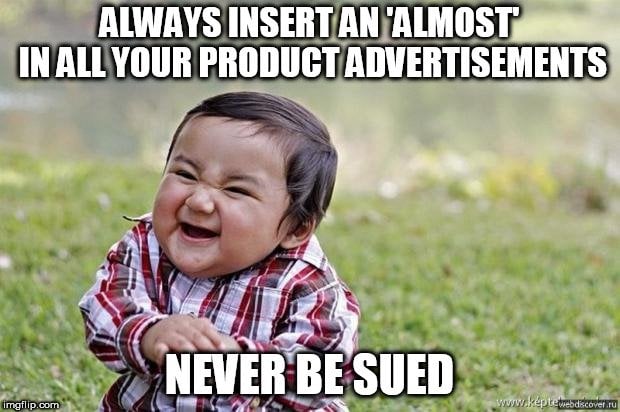 The figure 99.99% is not to be taken literally. You could say that it’s a kind of “get out of jail free” card. So, if a gentleman ever finds some problems with the effectiveness of the product and subsequently sues the manufacturers, they can simply play that card and say, “Hey buddy! We never said that the product was 100% perfect. We said it was 99.99% effective, and don’t forget, we also added the magic word…