In terms of size, however, the sun has a diameter of about 864,000 miles, nearly 110 times greater than the diameter of Earth. When it comes to mass, our star is 330,000 times more massive than Earth.

If you’re reading this article beside a window, or perhaps enjoying it outside on a lovely summer day, try to find the sun in the sky. Hold up your hand to shield your eyes, and you manage to completely obscure the image of our sun, the closest star to our planet and the giver of all life. From our minuscule vantage point, the sun appears no larger than the moon in the night sky, albeit significantly brighter.

However, as most of us know, the sun is much larger than the moon, and dwarfs our planet. Although we consider this pale blue dot a rather huge place, with thousands of cities and millions of sights we could never see in a single lifetime, but on the cosmic scale, our planet is truly an insignificant speck of dust.

What might surprise you to learn is that our sun is also not anything particularly special, in comparison to the rest of the stars scattered throughout our universe. Even so, since human beings wouldn’t exist without our closest solar neighbor, it’s important that we get to know it well. One of the first things people want to know, obviously, is how big our star truly is?

How Big Is The Sun?

For thousands of years, people have been staring up at our bright shining star and wondering about its secrets. After people progressed past worshipping the sun as a potentially vindictive or fickle god, rudimentary science came into play. More than two thousand years ago, Aristarchus, an ancient Greek astronomer, made the first real contributions to measuring not only the distance of the sun from our planet, but also the size of our nearest star. 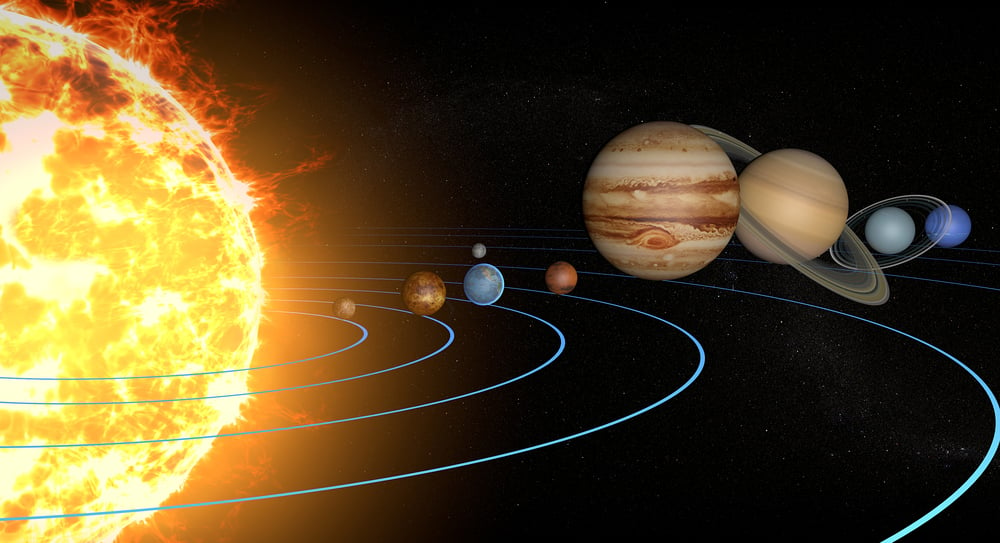 Sun is the biggest entity of our solar system. (Photo Credit : Naeblys/Shutterstock)

Lacking the equipment we enjoy today (not to mention satellites and extremely powerful telescopes), Aristarchus measured the angle between the sun and moon and Earth when the moon was directly overhead at sunrise. By applying some clever geometry and the Pythagorean Theorem, it is possible to determine the approximate distance between the Sun and Earth.

Once this distance is known (approximately 93 million miles), and the degree measure of the sun in the sky is known (.5 degrees), then a triangle can be deduced that describes the diameter of the sun. While ancient astronomers were using rough estimations and naked-eye observation to come up with these numbers, some of them were surprisingly accurate, and others were able to improve upon their methods throughout history.

While Aristarchus may not have had all the right answers, he was on the right track. Today, we know that the sun is about 92.96 millions miles from Earth, and while the distance between our planet and the sun is growing, we are gaining less than an inch of distance every year.

In terms of size, however, the sun has a diameter of about 864,000 miles, nearly 110 times greater than the diameter of Earth. When it comes to mass, our star is 330,000 times more massive than Earth, which shouldn’t be surprising, considering that the sun contains more than 99.8% of all the mass in our entire solar system! 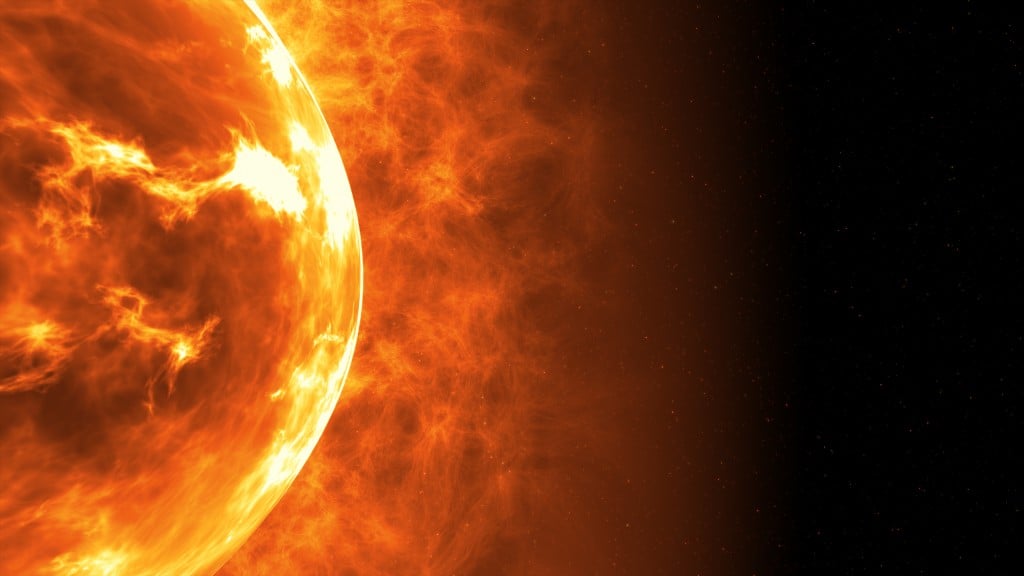 The sun contains more than 99.8% of all the mass in our entire solar system! (Photo Credit : FlashMovie/Shutterstock)

It can be difficult to comprehend the size of our planet, let alone the mind-boggling scale of the sun in comparison, but we’re going to try. The sun has a circumference of 2.7 million miles, whereas our planet has a circumference of less than 25,000 miles. To put this in perspective, if we ignored the oceans and began driving at 60 mph to circumnavigate the globe, never having to stop for bathroom breaks, refueling stops or snacks, it would take roughly 17 days to circle the entire planet. However, if you took a 60 mph drive around the entire sun (again, provided there was a highway and no need to stop for Red Bull), it would take more than 5 years to make the non-stop trip. 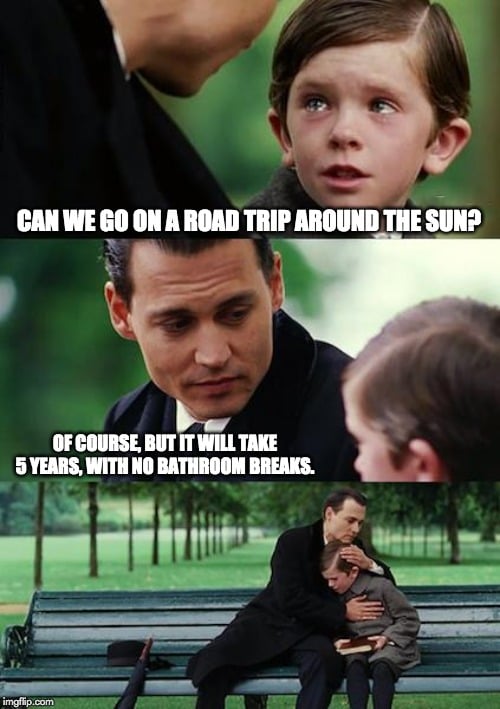 Our sun is a G-Type Main Sequence star, and is classified as a yellow dwarf, currently converting hydrogen into helium through a process of nuclear fusion in its core. This process will continue for billions of years to come, although it will change slightly over time.

Within 5 billion years or so, the hydrogen fuel will run out, and it is believed that the sun will start to expand into a red giant, ballooning to dozens of times it current size as other elements begin to fuse and be formed in the star’s core.

Our sun will grow much larger in the future, engulfing the nearest planets to it (Mercury and Venus), before finally collapsing and settling into a long white dwarf stage of its lifecycle. This final phase could perpetuate for another 1-2 billion years, driven by the energy from its earlier fusion activity, before it finally sputters and dies completely.

So, the short answer to the question of how big the sun is can be answered many ways, through rudimentary geometry of the ancients or precise astronomic measurements from space telescopes and Earthbound equipment. However, the size of the Sun is always changing, and will continue to do so for billions of years to come. All of the descriptions of the sun’s size (above) have made it seem incredibly large, but remember, the sun is average (at best!) in comparison to other stars in the night sky.

The Sun on a Universal Scale

Our star may seem impressive as the life-giving star of our solar system, but on the cosmic scale, our sun is an average-sized star on a relatively out-of-the-way arm of an average-sized barred spiral galaxy, similar to billions of others scattered throughout the universe.

Yes, some stars that we have discovered make our sun look like a planet beside them! Just as the Sun has a diameter than is more than 100 times greater than Earth, some stars have a diameter that is 100 times larger than our sun. For example, blue and red supergiants (not to mention red hypergiants) make our sun look like a smudge of dirt, rather than the blazing ball of nuclear fusion that it is. Betelgeuse, a red supergiant in the Orion constellation, is one of the brightest and largest stars we have discovered. If it were placed at the center of our solar system, rather than the “miniature” sun we have, it would completely engulf Mercury, Venus, Earth and Mars!

The largest star that humans have ever discovered in our galaxy (although there are almost certainly larger stars somewhere else in the universe) is UY Scuti. This is a red hypergiant variable star in the Scutum constellation, which has a radius that is more than 1,700 times greater than our sun, and a volume that is 21 billion times greater.

A star of this size is nearly inconceivable to the human mind, but perhaps this will put it in perspective. Consider our example before, of a car driving non-stop around the entirety of the sun, a journey that would take more than 5 years to complete. If you wanted to take an epic road trip around the outside of UY Scuti, the largest star we know, a round trip would take nearly 9,000 years!

Numbers on the galactic scale can quickly get out of hand, and size is a difficult concept to grasp for our earthbound minds, but it’s certainly worth trying to grasp. The sun is incredibly massive in comparison to Earth, but incredibly tiny compared to some of its distant neighbors in the Milky Way. Fortunately for us, Earth sits in the Goldilocks Zone of our star, making it ideal for the perpetuation of life. We may have identified millions of other stars, some far larger, and some far smaller, but thus far, we have yet to find a star with habitable planets that support life. In that respect, our average little star is pretty darn impressive!