We see many stars that shine with different levels of brightness in the night sky, but our view of each star’s brightness is not necessarily the reality in space!

In a clear night sky, one can observe many stars of different brightness levels. Of course, these stars appear to us with an order of luminosity. Several bright stars have piqued the curiosity of ancient people so much that they were given their own stories and lore. There are also thousands of dim stars that many of us might consider “inconsequential”.

However, are the bright stars we see from the Earth bright because they emit a large amount of energy and radiation? Or does our point of view from Earth just make it appear that way? 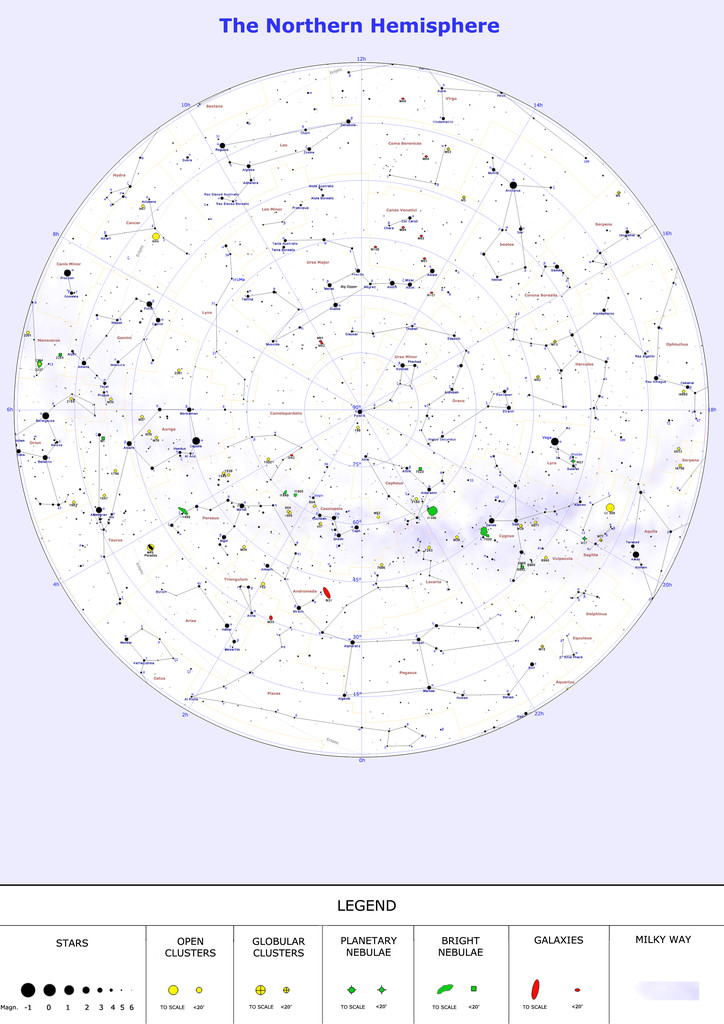 This is the sky map of the Northern Celestial Hemisphere. Here, we can see that the size of the marked stars are different depending on their brightness: the bigger the size, the brighter the star is. (Photo Credit : Roberto Mura/Wikimedia Commons)

First, we need to know about the brightest stars in the night sky. The first on the list is Sirius, found in the constellation of Canis Major. After Sirius, the next on the list are the stars Canopus, Rigil Kentaurus (also known as Alpha Centauri, the star system closest to Earth after the Sun), and Arcturus. It is interesting to note that this brightness list is from Earth’s point of view. In any other star system, this list might vary significantly.

Astronomers established this list of stars according to their brightness with the help of a system of star magnitudes.

The Greek astronomer and mathematician Hipparchus was the first person to introduce this system. In this, he grouped the brightest stars as ‘first magnitude’ stars and the dimmest stars as ‘sixth magnitude’ stars. All other stars are given the values, second, third, fourth, and fifth magnitudes, depending on their relative brightness level. The magnitude system is in reverse order; the brighter the star, the smaller its magnitude.

This is a scale providing a comparison between the stars and planets, as well as some of the telescope’s limits.

Over time, this magnitude scale became more refined and is now officially referenced as the ‘apparent magnitude’ of stars. It is ‘apparent’ since it refers to the level of brightness of the stars, as seen from Earth. Currently, it accounts for stars that are much dimmer than what the human eye can see. It also contains stars that have zero magnitude and even negative magnitude! Sirius, the brightest star in the night sky, has an apparent magnitude of -1.46, while our Sun has one of -26.72.

Mathematically, we calculate apparent magnitude using a logarithmic equation given by:

Now, apparent magnitude is not a measure of the actual brightness of stars. When seen from Earth, the brightness of celestial objects depends on two things: the intensity of the radiation emitted by that object, which is a measure of the amount of energy (in the form of light) it gives off, and distance. Here, distance is an important factor. A star that is significantly far away would still be visible to us, if it emits a sufficient amount of light energy. 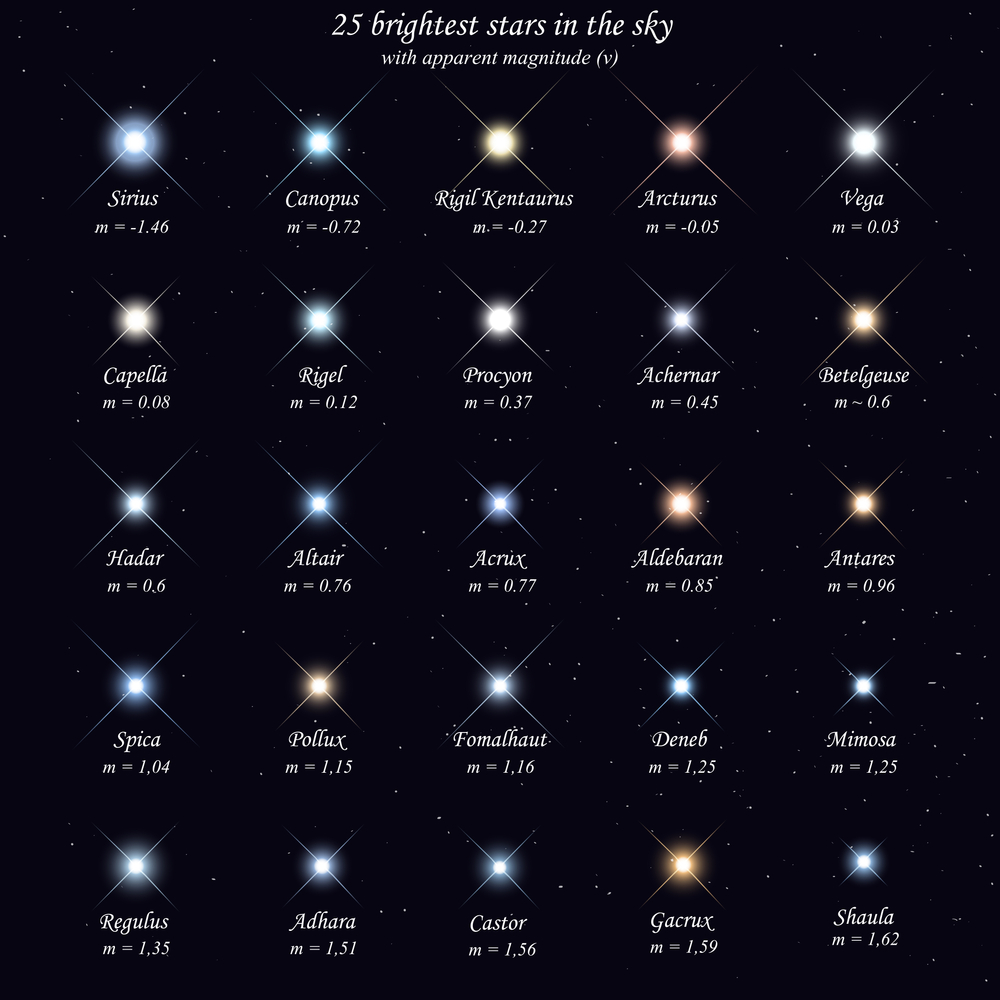 This is an image collection of the 25 brightest stars in the night sky, along with their apparent magnitudes. (Photo Credit : lerrosbershka/Shutterstock)

There is also a possibility that the light coming from distant stars is scattered or obscured by interstellar gas and dust particles. This would result in some reduction in the star’s brightness when viewed from Earth. However, this effect is not very significant, and has been largely ignored in this article.

To account for the total amount of light emitted by stars, another system called absolute magnitude was established. This system designates magnitudes of stars according to their brightness, if they were all being viewed from the same distance.

We can obtain the absolute magnitude of any celestial object using the relation given by:

where M is the object’s absolute magnitude, m is the apparent magnitude, and d is the distance between Earth and the star. 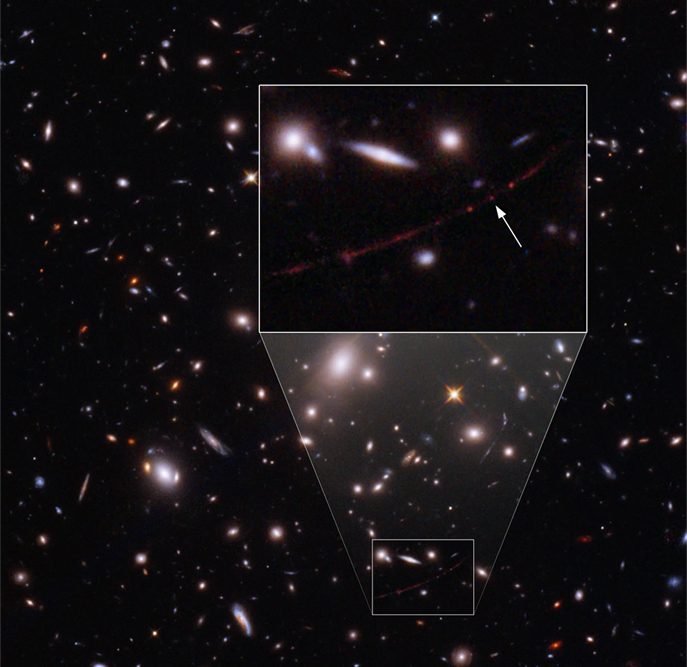 Another measure of the intrinsic brightness of stars is the absolute bolometric magnitude. This quantity accounts for the total radiation emitted by a star of all wavelengths, not just the visible light wavelengths. It also considers the electromagnetic radiation we would observe if the object were placed 10 parsecs away from the Earth (same as the absolute magnitude).

Now, we will use both apparent and absolute magnitudes to understand the extent of the difference between the actual brightness of the star and the brightness we observe here on Earth. Consider the first two brightest stars, Sirius and Canopus. The apparent and the absolute magnitudes of Sirius are -1.46 and 1.43, respectively, while those of Canopus are -0.72 and -5.6, respectively. This means that while Sirius appears brighter than Canopus from Earth, Canopus would outshine Sirius by quote a bit if they were placed at an equal distance from an observer. 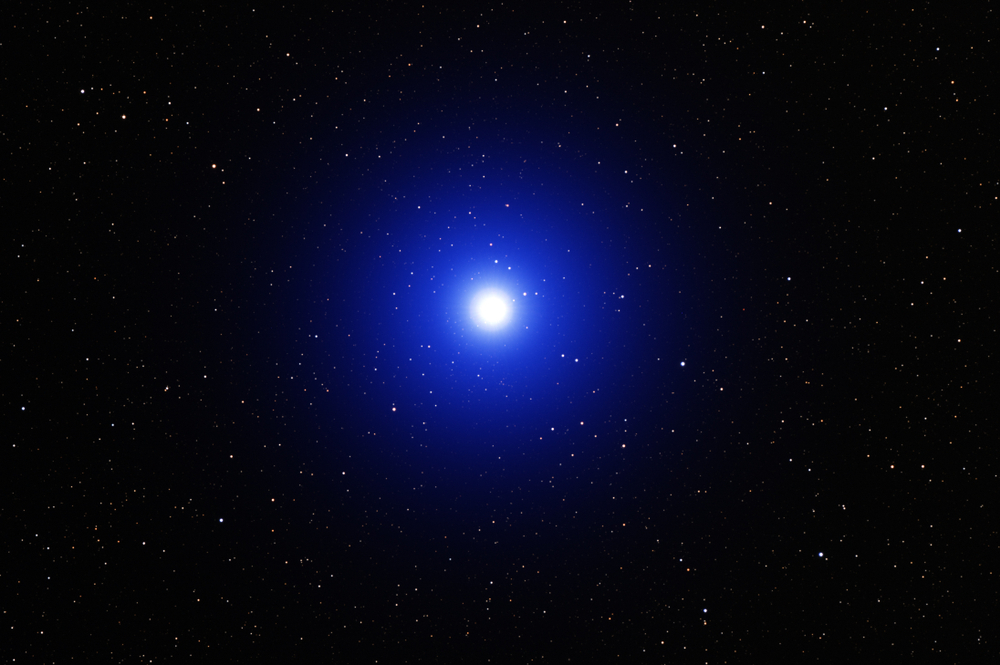 This is an image of the brightest star in the night sky, Sirius, taken with the help of a telescope . (Photo Credit : AstroStar/Shutterstock)

Clearly, what we observe does not give us the whole picture. Another instance of this is the star Rigel. Despite being only the 7th brightest star in the night sky, with an apparent magnitude of 0.12, it has an absolute magnitude of -7.0, making it one of the stars with the highest inherent brightness.

The main factor for this contrast is that these stars are set at different distances from Earth. Sirius is one of the nearest stars to our solar system and is only around 8.6 light-years away from us, while Canopus is a much further 309 light-years away. Rigel, on the other hand, is approximately 860 light-years from Earth, but still shines brighter than most.

An artist’s rendering of the star R136a1, and the near-infrared image of its parent cluster taken using ESO’s Very Large Telescope. R136a1 is considered to be one of the most luminous stars ever observed. (Photo Credit : Flickr)

So, which star has the highest value for intrinsic brightness? That question is rather difficult to answer. There are so many stars out there whose absolute magnitudes are still left to be measured. Some of the possible candidates in this list include R136a1, Pistol star and BAT99-98.  Although, a good rule of thumb would be that the very distant stars that are visible to us will have high characteristic brightness.

Also Read: How Are So Many Stars Named And Identified?

The bottom line is Sirius is not really the ‘brightest’ star. It appears so because it is relatively closer to us than most of the other stars out there. There are many stars out there that are more luminous than Sirius, but they unfortunately cannot grab the limelight since they are positioned very far away.

Finding the absolute brightness and the total amount of energy emitted by stars help us develop numerical models of star formation. It also enables us to understand and study the evolution of stars and all the processes that take place inside them. Observing and understanding high-brightness stars plays a crucial role in our knowledge of the star formation process, which in turn helps us learn more about gas evolution in galaxies, supernovae, etc.