There are so many stars that are visible in the night sky, but over the centuries, astronomers have devised ways to uniquely recognize them.

Anyone who has spent a whole night looking curiously up at the sky will have marveled at the grand spectacle of stars, planets, clusters, and even galaxies. People who have a certain level of experience with the night sky might even be able to recognize some of the brighter stars.

There are many stars up there; even without using telescopes or other optical aids, we can still see hundreds of them in a clear night sky away from city lights.

This begs the question: how are all those stars named and recognized? 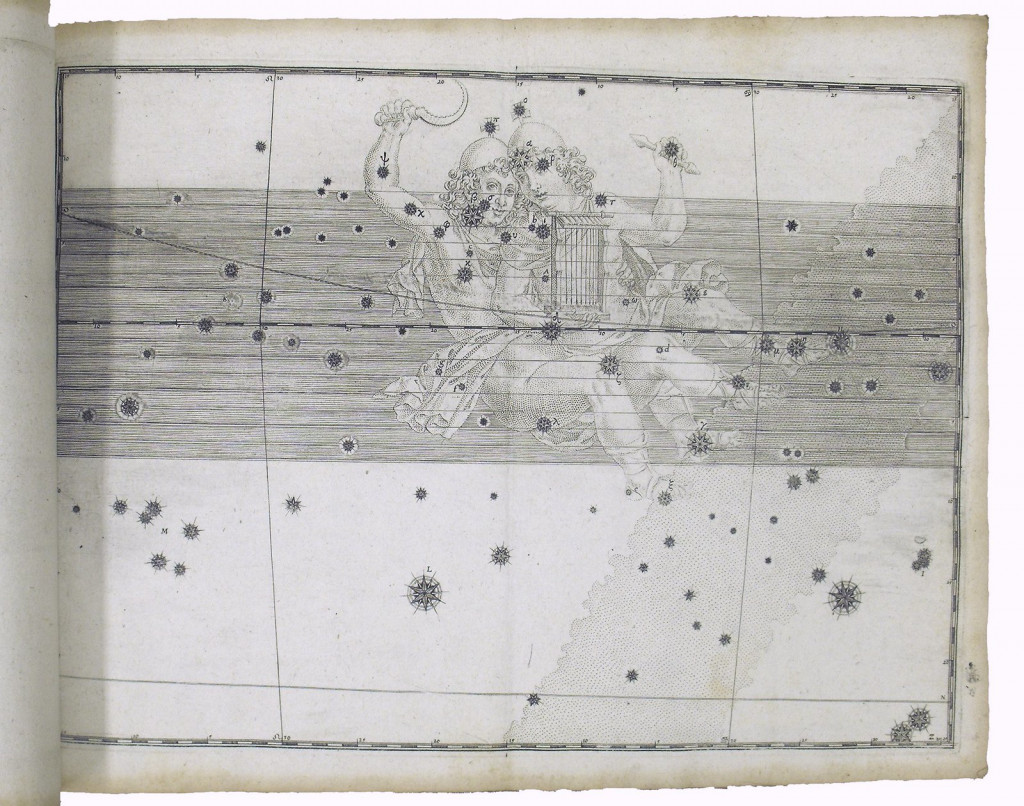 This is an image of the constellation of Gemini from Bayer’s star atlas, Uranometria. It was one of the earliest attempts to catalogue star names in the form of a sky atlas. (Photo Credit : Flickr)

To answer this, we first need to take a short history tour through how stars have been named over the centuries by human beings.

Historically, the most prominent and bright stars in the sky usually have a name that was given to them in the past and is still used today, often in everyday speech.

However, modern-day professional astronomy involves giving ‘designations’ to stars that are alphanumeric, which is used in all official catalogues.

For example, the brightest star in the constellation of Lyra is named Vega, but it has the designations Alpha Lyrae (Bayer designation), 3 Lyrae (Flamsteed designation), HR 7001 (from the Yale Catalog of Bright stars), and other names in several other catalogues. In this article, we will explore the different types of star names and the designations we use today.

We will first consider the names that have been given to stars. These are formally referred to as their ‘proper names’ and are either of ancient origin, more recent origin, or they have been named by numerous organizations under the International Astronomical Union (IAU). The oldest proper names mostly date back to ancient Greek origins.

Some examples of these are Sirius, meaning ‘searing,’ Procyon, coming from the Greek words ‘pro kion’ meaning ‘before the dog,’ and Arcturus, meaning ‘Bear Driver,’ since the star seems to follow the constellation Ursa Major—the Great Bear. 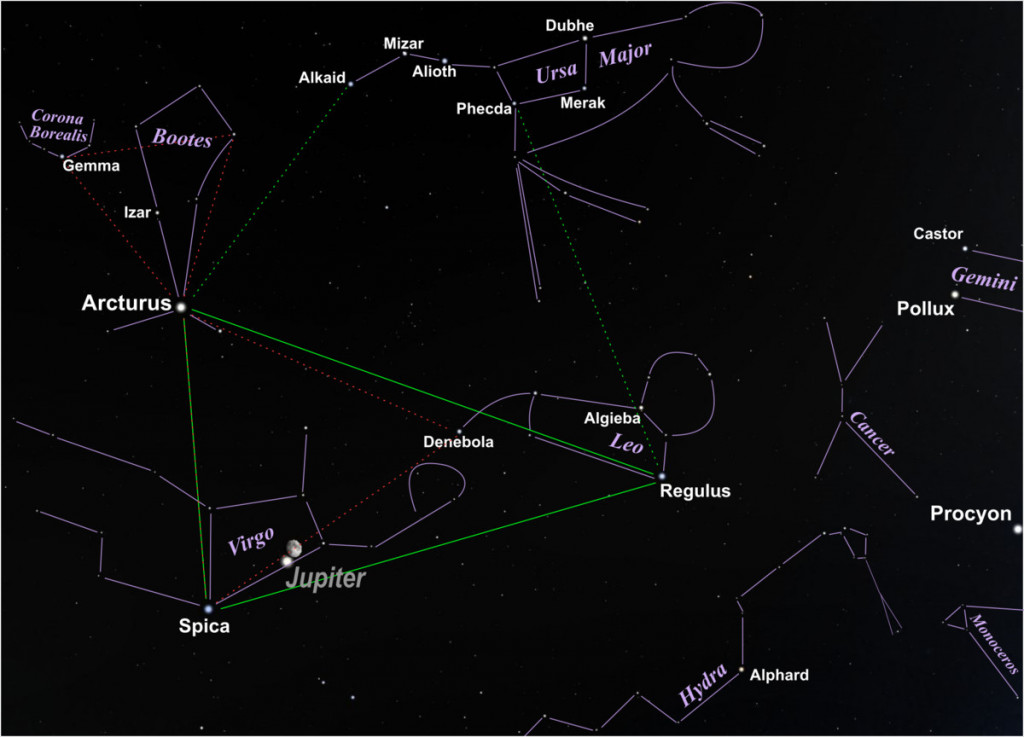 This is a diagram of the famous Spring Triangle. Here, we can see that Arcturus follows Ursa Major, while it moves across the sky, thus earning its name. (Photo Credit : Elop /Creative Commons)

However, a majority of the stars’ proper names are of Arabic origins, since they were labelled by Arabic astronomers during the Middle Ages. These names have a lot of lore and origin stories behind them, based on the position of the stars in their constellation. Examples of such naming are Deneb, meaning the ‘tail,’ Aldebaran, meaning ‘the follower’ (of the Pleiades star cluster), and Fomalhaut, meaning ‘the mouth of the whale.’ 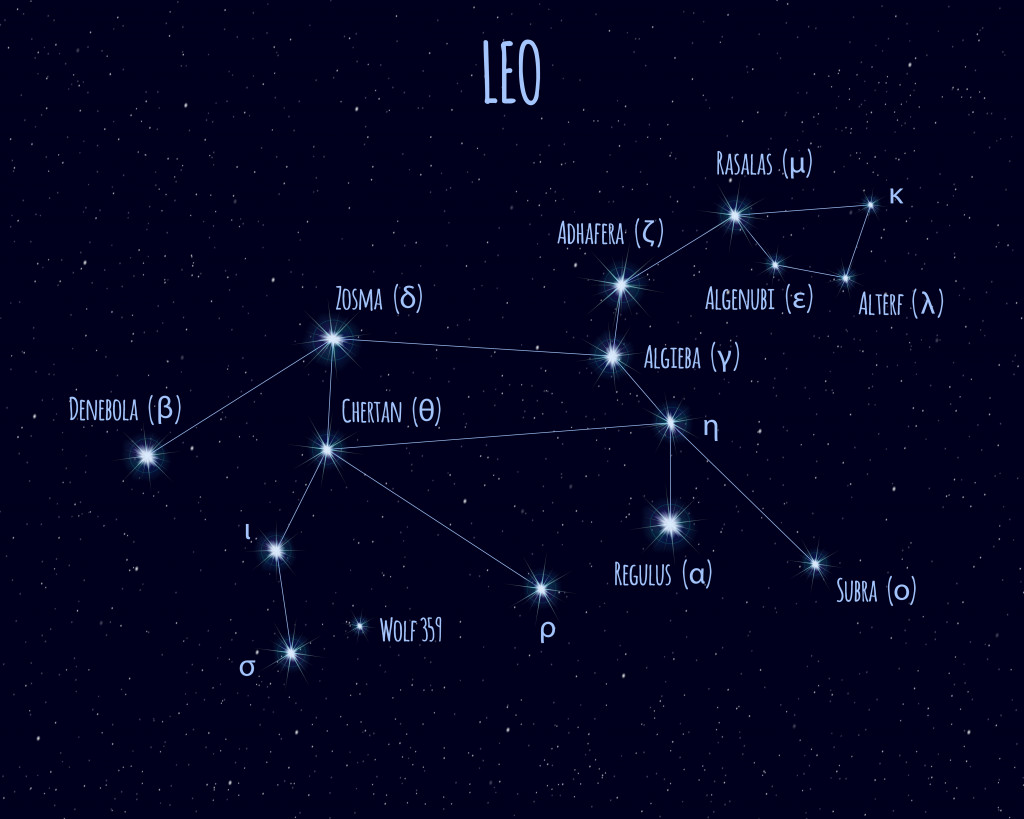 This diagram contains the proper names of prominent stars in the constellation of Leo. The Greek letters in the parentheses are the Bayer designation of the respective stars, which will be explained later in the article. (Photo Credit : Jazziel/Shutterstock)

In the year 1600, Johannes Bayer released his star-naming catalogue. In it, he used lowercase Greek letters for stars in a roughly descending order of brightness, within the same constellation. Thus, a strict interpretation of this would mean that the brightest star in a constellation would be designated ‘Alpha’, the second brightest would be ‘Beta,’ and so on. The Greek letter is followed by the Latin genitive of the constellation name. 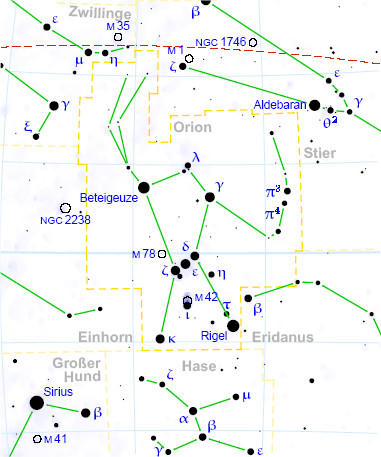 This image of the Orion constellation and other nearby constellations shows the Bayer designations of its constituent stars. Other names (like M78 and NGC2238) refer to deep-sky objects like star clusters, galaxies, etc. (Photo Credit : Marc Layer/Wikimedia commons)

However, Bayer did not always follow his own brightness scheme. If we look at the constellation of Ursa Major, he simply designated the Greek letters to the stars from west to east. Another discrepancy was found in the constellation of Gemini, where the first and second brightest stars were dubbed ‘Beta Geminorum’ and ‘Alpha Geminorum,’ respectively.

There is also the fact that there are only 24 Greek letters. Bayer attempted to solve this using lowercase Latin letters ’a-z’ (which numbered the 25th to 50th stars), and then using the uppercase Latin alphabets, ‘A-Z’ (assigned for the 51st to 76th stars). However, these schemes are not commonly used.

Two hundred years after Bayer first introduced his system, John Flamsteed introduced his numerical classification system. In this scheme, the stars are numbered in order from west to east within each constellation. Thus, the westernmost star within the constellation Taurus was dubbed 1 Tauri, the second westernmost would be labelled 2 Tauri, and so on. Note that the Latin genitive of the constellation is added after the Flamsteed number. Overall, more than 2,600 stars received Flamsteed numbers. 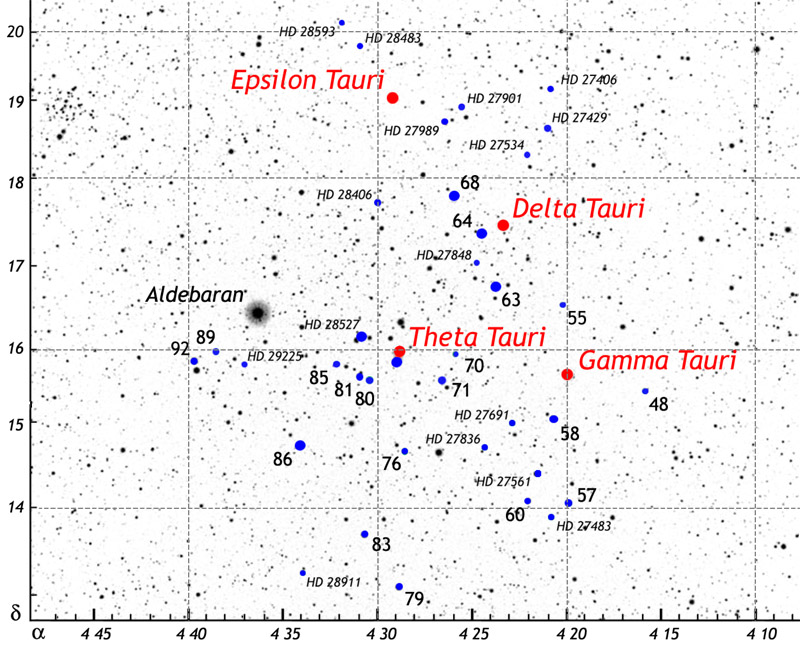 This is an image of the core stars in the Hyades star cluster. Here, the Greek naming represents the Bayer designations, while the numbers represent the Flamsteed designation. (Photo Credit : Thuvan Dihn/Wikimedia commons)

Both Bayer and Flamsteed designations cover the bright and prominent stars within a constellation. Eventually, as fainter stars were discovered over time, there came the need to devise a new system to identify these stars. For that, new catalogues based on the star’s position in the sky were made (by making use of a coordinate system similar to the Earth’s latitudes and longitudes), without considering the parent constellation.

One of the most popular catalogues used in Astronomy is the Yale Bright Star Catalogue. The stars in this catalogue are designated as ‘HR’ or ‘BS’ followed by a 4-digit number. Here, ‘HR’ refers to ‘Harvard Revised,’ since the cataloguing was first done by Harvard, before Yale started publishing it. The catalogue consists of about 9,110 stars; some examples of this classification include HR 2326 (Proper name: Canopus), and HR 7001 (Proper name: Vega).

Another commonly used catalogue in astronomy is the Henry Draper (HD) Catalogue. This catalogue also makes use of star positions in the night sky and lists more than 225,000 stars. The designation is done by an ‘HD’ followed by a 6-digit number. It also contains information about the stars’ spectral classes—an indication of the kind of radiation emitted by the star. The HD catalogue has stars that are both bright and faint. 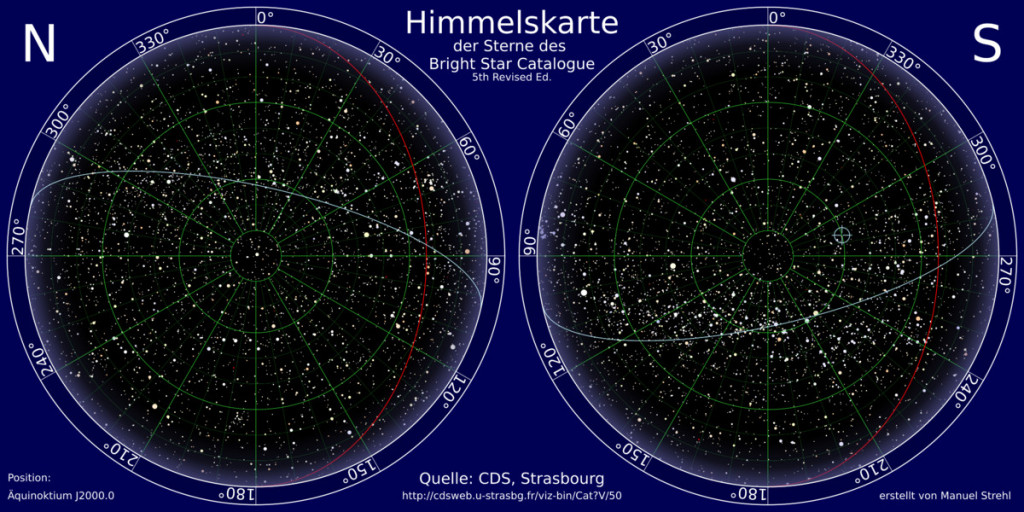 This is a sky map with star positions from the Bright Star Catalogue. (Photo Credit : Manuel Strehl/Creative Commons)

To give some idea about the number of classifications out there, the second brightest star in the constellation of Orion has the proper name ‘Betelgeuse’ and has the following designations: Alpha Orionis (Bayer designation), 58 Orionis (Flamsteed designation), HR2061 (Yale Bright Star Catalogue), HD39801 (Henry Draper Catalogue), BD+7 1055 (Bonner Durchmusterung catalogue), and SAO113271 (Smithsonian Astrophysical Laboratory catalogue).

Thus far, the catalogues involve single stars with fixed magnitudes (or the star’s brightness when viewed from Earth). However, there are double or multiple stars (two or more stars that appear very close to each other and may or may not be gravitationally bound to each other), as well as variable stars (stars whose brightness changes with time).

This is an artist’s rendition of the Sirius binary system, with the primary star labelled as Sirius A and the companion star as Sirius B. (Photo Credit : Merikanto/Wikimedia commons)

In the case of double or multiple stars, one of the commonly used methods to label them consists of assigning the capital Latin letter in order of their discovery or of descending brightness (in most cases, this is usually the same thing). Here, the primary star will have ‘A’ after its proper name or designation, and then the suitable Latin letter for the companion stars. For example, the brightest star in the sky, Sirius, has its primary star assigned as Sirius A, and the companion star designated as Sirius B.

For variable stars, the labelling was first proposed by Friedrich Wilhelm Argelander. Here, he proposed using the letters left over in the Bayer designation.

Since the farthest Bayer had gone with his categorization was ‘Q’, the first variable star discovered in the constellation would be ‘R’, followed by ‘S’, and so on. After ‘Z’ was exhausted, double letter designations, ‘RR’, ‘RS’… until ‘ZZ’, were used. When more variable stars were found, astronomers started labelling them from ‘AA’, ‘AB’… ’BA’… up to ‘QZ’. One example of this scheme is R Cygni, as it was the first variable discovered in Cygnus constellation. 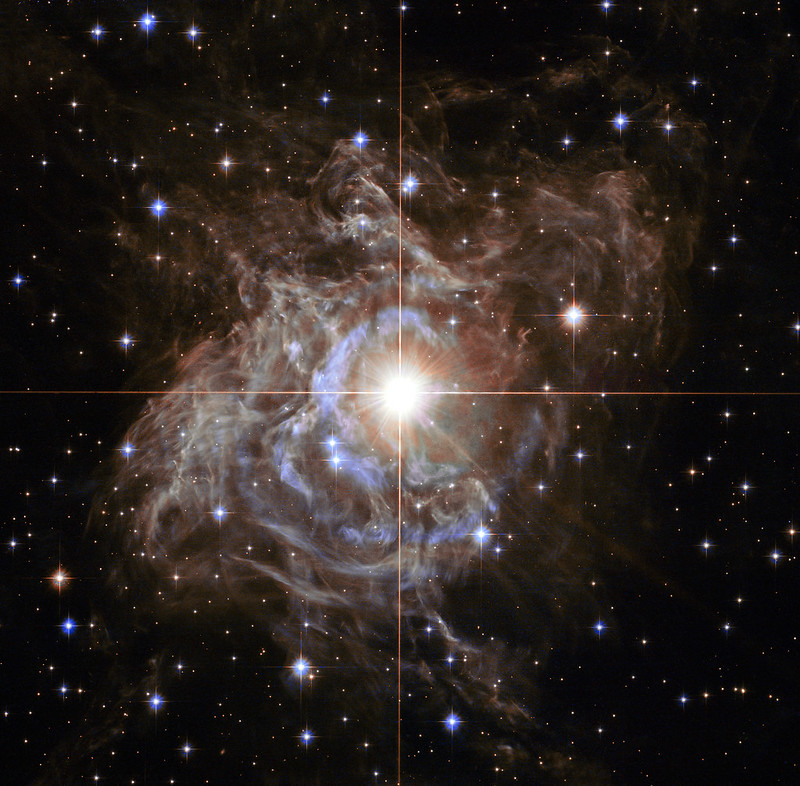 Here is an image of the variable star, labelled as RS Puppis, taken by NASA Hubble Space telescope. This star is of a Cepheid variable type, and such stars have brightness that vary over long periods of time. (Photo Credit : Flickr)

Following this, astronomers simply resorted to using V followed by a 3-digit number. For example, V335 Tauri in the constellation of Taurus, is a variable star that follows this nomenclature.

Also Read: Are The Constellations Always Going To Look The Same As They Look Today?

Star naming and cataloguing is an important aspect of modern-day astronomy. Since more surveys mean a greater number of stars, giving them designations will make it easier to study their properties and characteristics. In some cases, the cataloguing may even contain information, like its position in the sky. In other cases, the designation systems we discussed earlier have been used to identify new classes of stars.

This is particularly true in the case of variable stars. Humans have come a long way in the study of stars and stellar systems, with star naming playing a very fundamental role in our understanding and appreciation of the cosmic wonders above. 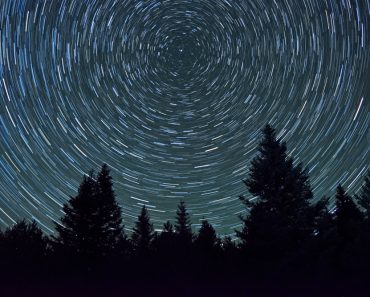