Decoy flares are countermeasures against heat-seeking missiles. They are made from special materials that ignite instantaneously when they come in contact with the air. The MU-27A/B flares, which are quite popular, work in this fashion. These decoy flares work by confusing the missile as to the real position of its target.

Whenever I think or talk about flares, I’m instantly reminded of that epic scene from the movie Behind Enemy Lines where the protagonist and his friend are flying a reconnaissance sortie when they’re fired upon by two SAM (surface-to-air missiles) by enemy forces.

When the pilot gets an alert that their aircraft is being ‘painted’ by enemy forces, and a SAM missile was closing on their position fast, the first thing he does is deploy ‘decoy flares’. Here’s that particular scene to which I’m referring:

Now, when I first watched the movie, I was fascinated by the shiny little fireballs that the aircraft fired at the oncoming missile, but I didn’t really understand what those little ‘fireballs’ actually were, nor how they would prevent the missile from hitting the aircraft, given the fact that they were too small (individually) to account for the much larger SAM missile.

We should start with the real name of those ‘little fireballs’.

As the name signifies, decoy flares are very hot, burning objects that are released from an aircraft to prevent the incoming missile from hitting it, i.e., they act as a decoy.

Most decoy flares are made from special materials that ignite instantaneously when they come in contact with the air. The MU-27A/B flares, which are quite popular, work in this fashion. These decoy flares, which are also called pyrophoric flares, because they burn up the moment they ‘touch’ the air, work to prevent a heat-seeking missile from hitting its (intended) target in a rather brilliant way. 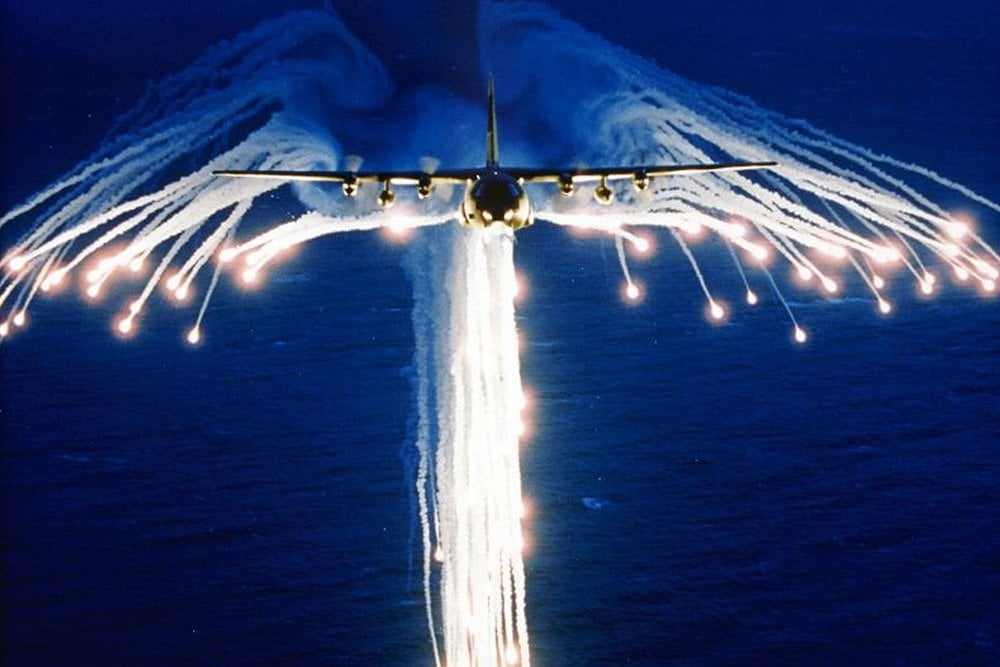 Suppose you’re flying a fighter jet over enemy territory. Suddenly, you see a warning on the screen in front of you that a SAM missile has been fired at you. The missile that has been fired is ‘heat-seeking’, i.e., it works on the principle of infrared homing. Essentially, the missile is programmed to ‘seek’ the heat released from the exhaust of your fighter jet.

You’d be doomed, if not for the decoy flares that your aircraft has onboard. These are countermeasures, and when they’re fired, they burn at high temperatures, confusing the heat-seeking missile as to the real position of its target. After decoy flares are fired, you would ideally pull away your aircraft at a sharp angle from the point where you fired the flares. You’d also reduce engine power in a bid to control or minimize the thermal signature of your plane. 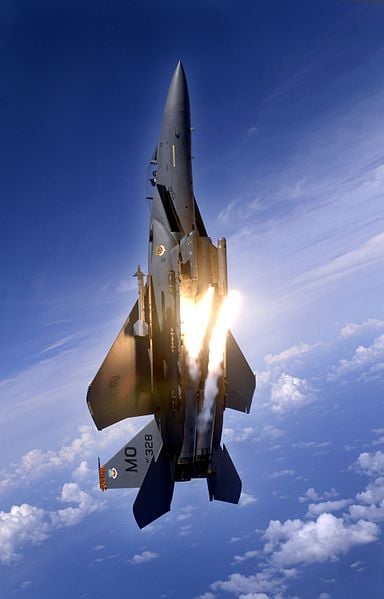 This way, the missile would get ‘confused’ by the sudden change in temperature and the flurry of new heat signatures, and in response, will end up pursuing the decoy flares rather than your plane itself.

The upshot? You and your plane would be saved! 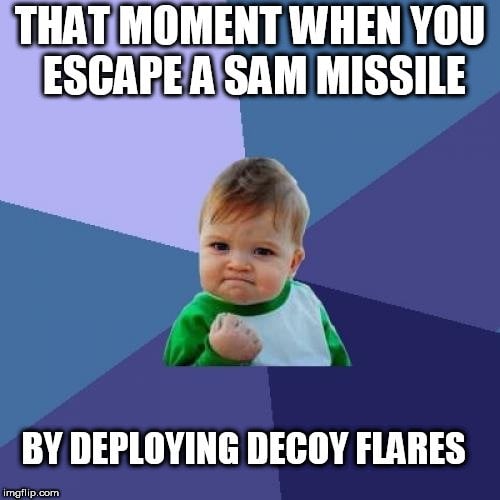 However, you might know that not all missiles are heat-seeking; some follow their target based on their radar position, radar-guided missiles. Since these missiles don’t have anything to do with the heat released by the exhaust of your plane, they won’t be affected if you deploy pyrophoric flares to escape them. To tackle radar-guided missiles, you need a different kind of countermeasure.

Chaff is a radar countermeasure that is equipped in most modern warplanes or other targets to protect against radar-guided missiles.

Chaff is actually a cluster of tiny, thin pieces of aluminum, metallic glass fiber or plastic. When released/deployed by the target aircraft, it appears as a cloud of small targets to the incoming radar-guided missiles.

Airplanes and missiles are both made of metal, so naturally, they tend to have a radar signature, i.e., enemy radar can locate their position with reasonable accuracy. A typical radar-guided missile homes in on its target by following the latter’s radar signature. 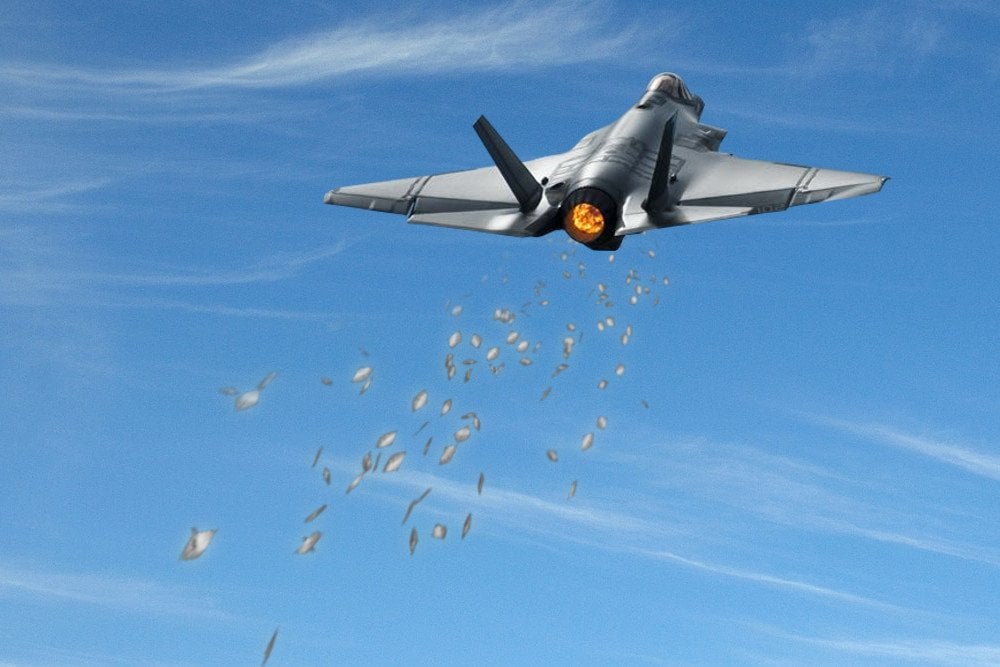 An artist’s impression of a fighter jet deploying metallic chaff.

However, when you jettison a cluster of small metal pieces in your wake, the radar-guided missile (pursuing you) gets confused by the sudden increase in the radar signature of so many small, metallic targets. As a result, if you’re lucky, the missile will end up hitting one of those ‘little’ targets, exploding and ceasing to be a threat to you and your plane.

Congrats! You escaped a missile attack yet again!

All this talk about countermeasures and how awesome they are might make you feel that it’s easy flying a fighter jet, but if that’s how you feel, let me tell you this: 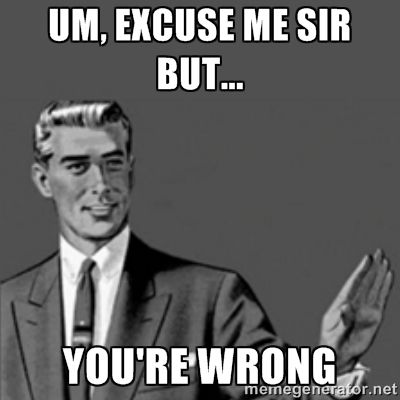 Modern missiles are equipped with so-called ‘counter-countermeasure’ (CCM) systems these days, whose sole job is to make sure that they beat whatever countermeasures they encounter on their way to the target. The weapons industry is actually a never-ending battle between missile and countermeasure engineers to design better and better systems to beat the other.