Guided missiles work by tracking the location of the moving target in space by certain methods (eg. using a radar or following its heat signature), chasing it down and then finally hitting it with accuracy. Guided systems in missiles can be of various types, which serve different operational purposes.

Missiles have been around for quite some time now. In fact, humans have been using missiles – in various forms – for centuries. However, just as it happens with everything else, the technology of missiles has also improved dramatically over the past century. On today’s high-tech battlefields, we have guided missiles packed with explosive warheads that have become the devastating weapon of choice to destroy targets swiftly and with amazing accuracy.

In this article, we’re going to explain how guided missiles work and how they follow moving targets in non-straight trajectories to hit them with incredible precision.

A missile (used for the purposes of warfare) is basically a flying bomb that strikes its target with incredible precision. Earlier, satellites were simply larger and more powerful versions of regular bullets; they followed a relatively straight trajectory to hit their target, i.e., they didn’t have a system that could ‘guide’ them. However, thanks to technological development, there are now dedicated guidance systems in missiles that make them ‘pursue’ their chosen target until a hit is achieved.

Guidance systems mainly consist of three parts: navigation (for tracking the current location of the missile), guidance (for directing the missile towards the target using navigation data and target information) and control (for applying guidance commands on the missile). 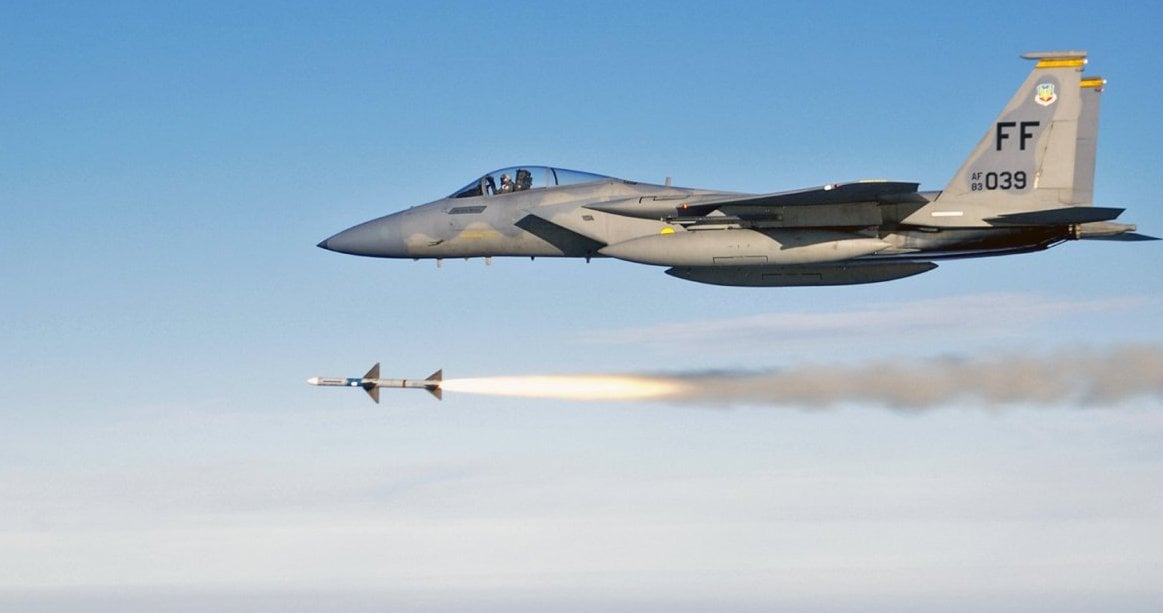 An air-to-air missile being launched from an aircraft (Image Source: Wikipedia.org)

According to the ‘profile’ of the target, guidance systems can be classified into two types: Go-Onto-Location-in-Space (GOLIS) and Go-Onto-Target (GOT). While GOLIS systems are usually limited to stationary or near-stationary targets, GOT systems prove to be highly effective in taking down both stationary and moving targets.

Now, let’s take a look at the main systems that are currently being used to implement various guidance control rules in missiles. Commonly referred to as the LOS system, this type of control system consists of three components: a reference point (usually a radar station), a missile, and a target. Its mode of operation is also rather straightforward: the radar station tracks the target continuously (regardless of whether it’s moving or not) and emits a beam leading up to the target. If the missile has enough fuel to reach the target, maintains a decent relative velocity and stays on the beam, then it will make the hit.

The most glaring limitation of LOS systems is that they are almost rendered useless in situations where the target is using evasive maneuvers. Since most airborne targets involved in militaristic operations (like fighter jets) are rather good at climbing and diving swiftly, dodging LOS missiles is fairly easy for them. Also, you wouldn’t want to use an LOS missile to hit a target that’s approaching the reference point directly, since it’s out of their operational capacity to make increasingly tighter turns to stay on target. As the name signifies, the fired missile in this system automatically stays on the target and continues pursuit it until it makes the hit. As opposed to the LOS system, this guidance system involves only two players: the missile and the target. This system also has two variants, namely Altitude Pursuit (AP) and Velocity Pursuit (VP).

Installed at the head of the missile is some type of tracking system, like a radar system (an active homing technique) that receives emissions from the target, or an infrared optical sensor that tracks and pursues the heat signature of the target (the IR sensor in the missile tracks the heat emitted by jet exhausts). The latter system is called infrared homing (a passive homing technique); you have almost certainly seen the implementation of such systems in heat-seeking missiles in movies.

Here’s one missile chase scene from Behind Enemy Lines (2001).

This system works pretty efficiently in real-life scenarios, making it one of the most popular guidance systems used in missiles all over the world. Interestingly enough, missiles that use this guidance system are often quite aptly referred to as fire-and-forget missiles. A few such missiles include the US’s FGM-148 Javelin, RAF’s Brimstone, Russia’s V-750 VM, India’s Nag and Astra missiles, and many others. Although the pure pursuit system is quite effective, it does have its limitations. For example, a missile that relies on the radar transmission of the moving target is rendered useless if the target, say a fighter aircraft, has deployed countermeasures (like chaffs or corner reflectors) that interfere with the operation of the missile’s radar by saturating it with false information regarding its position.

Heat-seeking missiles also lose their operational usefulness if the ‘profile’ of potential targets is not known in advance. Furthermore, you run an enormous risk of hurting friendlies and civilians when you fire a heat-seeking missile in low-intensity combat in a populated area, as it might miss and hit an unintended target. The lack of a ‘man in the loop’ in such systems makes them prone to hurting innocent or uninvolved third parties.

Proportional navigation is a guidance law that relies on the fact that two objects are bound to collide if their direct line of sight does not change as the range closes. To understand this, consider the example of two cars approaching the same point from two different directions. If the relative velocity of these two cars remains constant as they move towards the same point (in technical terms, the bearing angle between these two cars does not change over time as they close in), then they are on a collision course and therefore bound to collide.

In a proportional navigation system, the missile stays on a trajectory with a constant bearing angle to the target. Unlike the pursuit guidance system, such missiles don’t pursue the target; they just keep moving in a carefully calculated direction (keeping the angle between them and the moving target, say, an aircraft, unchanged) with a constant velocity to eventually smash into the target. As you saw, all variants of missiles have their own advantages and limitations. Which missiles are eventually used on battlefields depends on a number of factors, including the type of target, the intensity of combat, geographical characteristics, and other practical aspects to ensure a powerful impact with maximum precision.

How much do you know about guided missiles?