Simply put, surface tension is the tendency of molecules of a liquid to be attracted more towards one another at the surface of a liquid than to the air above it.

Imagine that your favorite bartender is pouring a pint and wants to make sure you have a full glass. When she slides it over to you, it looks as though there is beer coming out of the top. You lower yourself to the level of the pint, and sure enough… there is a tiny bulge of beer that appears to be rising higher than the edge of the glass. 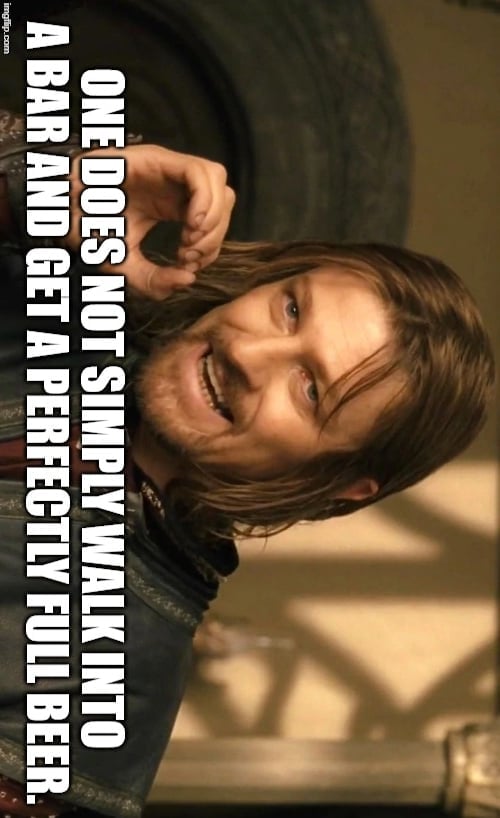 You shake it off, thinking that perhaps this should be your last drink of the night, but actually, you just witnessed surface tension in action. Surface tension is a mysterious and rather fascinating aspect of liquid matter that many people have heard of, but may not fully understand. Let’s take a closer look at this remarkable natural phenomenon, starting at the beginning.

What is Surface Tension? 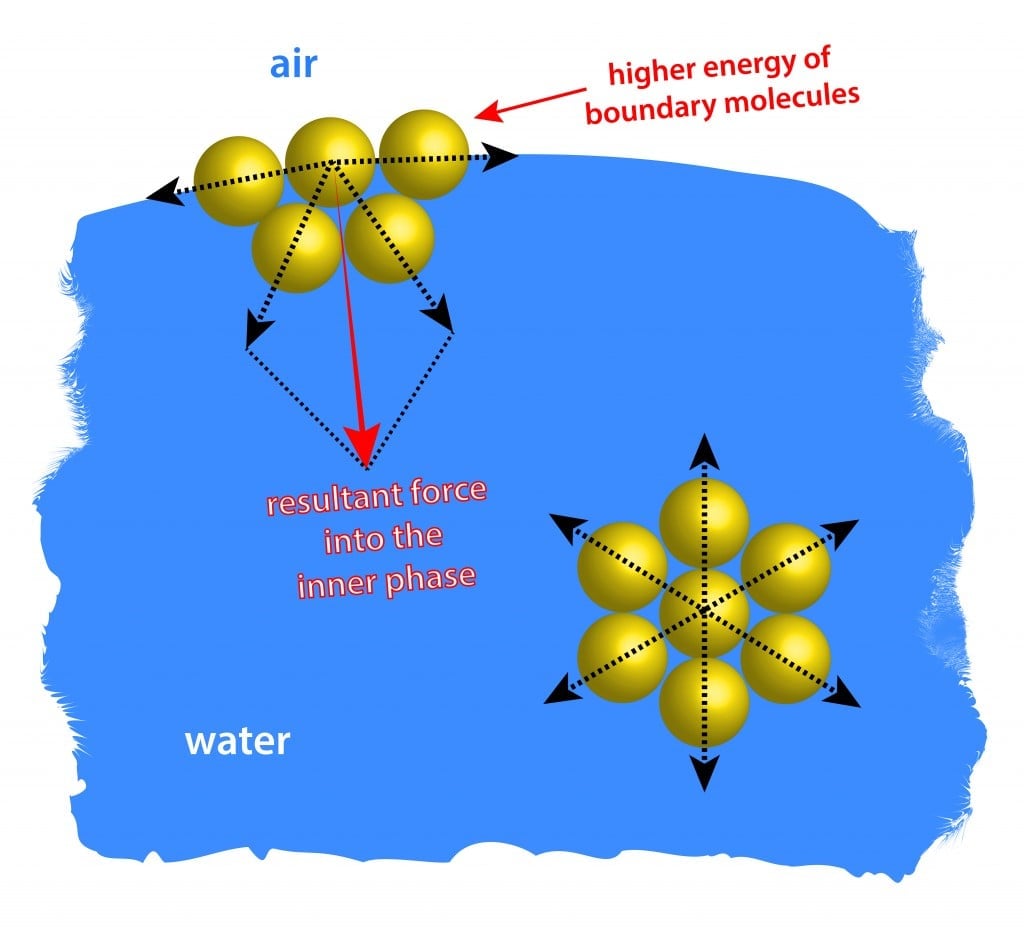 This downward pull on the surface-level molecules causes them to be pulled in tighter to one another, compressing into a more stable, aligned arrangement. This tighter row of surface molecules forms something of an elastic membrane on the surface of the liquid. The molecules are more tightly arranged and are smoothly lined up beside one another, unlike the more chaotic molecular arrangements below.

The strength of this “elastic membrane” is dependent on the type of liquid. Water, for example, has a very high surface tension, because oxygen and hydrogen—the two chemical components of water (H2O)—have partial negative and positive charges, respectively, and are thus attracted to all of the other water molecules surrounding them. Hydrogen bonds are notoriously strong, so water tends to hold up even better at the surface than other liquids, forming a shield that can be surprisingly difficult to break.

Why Is Surface Tension Important?

While this property of liquids is certainly interesting, it doesn’t seem to play a very big role in our daily lives, but that is where you are wrong. Apart from watching cool videos of perfectly round water droplets falling in slow motion (another example of surface tension) or water striders kicking themselves along at 2 meters/second by skimming along the surface of a lake, why does surface tension matter? 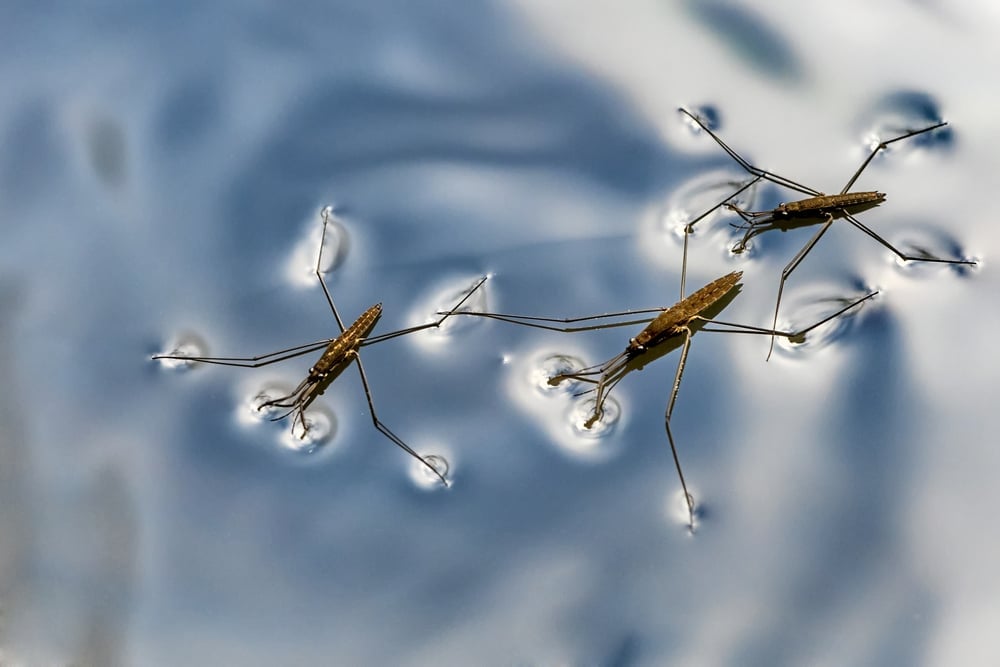 In certain industries, surface tension is an easier metric for the contamination of products. Since surface tension is determined at a molecular level, any change to the component liquids, surfactants, fuels or compounds in a liquid would result in a change in the surface tension. If the surface tension of a perfectly pure composition is known, any variation from that would reveal some level of contamination. This may seem like an abstract application of surface tension, but it shows how even the simplest things can have the biggest impact in science. Interestingly enough, the effect of impurities on surface tension was first discovered by Agnes Pockels—a woman fascinated by physics but denied access to education—while doing dishes in her kitchen!

As mentioned earlier, surface tension is important for water striders, one of the few creatures who can move across the surface of water without falling in. This phenomenon is because the strider’s legs are “nonwettable”, meaning that the striders’ legs repel water and capture air, allowing them to essentially depress the surface of the water, without breaking it. The hairs also increase the water striders’ surface area, which means less force is being exerted on the surface of the water. It is a mind-boggling combination of delicate force and ideal adaptation. 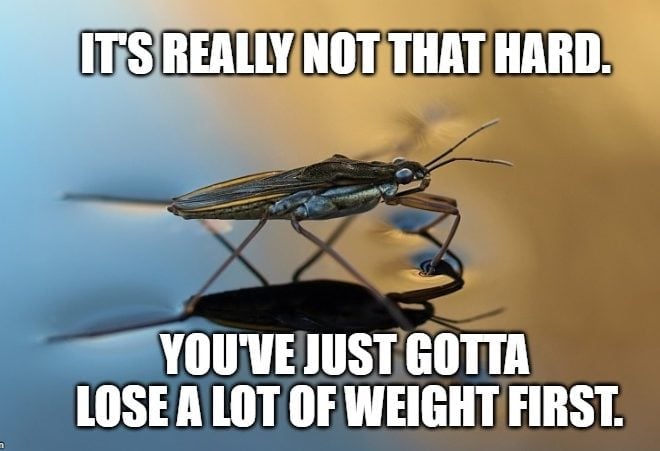 Most importantly, however, and something that few people realize, surface tension allows things to float, from leaves and seeds to molecules and proteins. When you get down to the microscopic scale, the surface of any body of water is very much alive and supported by the surface tension of water molecules. Our ecosystems would be unable to survive, or even develop, without the action of surface tension, and the very composition of water would be less stable, constantly flowing into and out of a gaseous state. Yes, believe it or not, surface tension may be the only reason life as we know it has managed to survive this long!

Surface tension is one of those details of the scientific world that may be hard to conceptualize or value in your daily life, but it actually underpins all of life as we know it. Surface tension allows ecosystems to thrive, it allows seeds and molecules to float, and drives much of life, albeit in a way most people overlook. It also provides an intriguing reminder of just how complex and remarkable every drop of water truly is. Next time you blow a soap bubble or slurp a bead of water off the tip of a leaf, remember that the only thing making those little miracles possible is surface tension!