Rigor Mortis is the post-mortem stiffening of muscle. It takes 2 to 6 hours to develop and can last for 24 to 84 hours. It is useful to calculate PMI.

One of the most commonly heard words in crime dramas is rigor mortis. The forensic expert will somberly explain to the cops that the victim died more than 6 hours before the body was found, because they observed rigor mortis in the corpse. However, what does rigor mortis mean? And how do forensic experts use it to determine the time of death?

What is Rigor Mortis?

These postmortem signs develop due to certain physiological changes that occur in the body after death. A forensic expert can use these changes to calculate the time of death. Time of death is more formally called the post-mortem interval, which is defined as the time interval from death to when the corpse was found.

Why does Rigor Mortis occur?

Rigor mortis occurs because after death, the body begins to decompose itself. This is the called autolysis. Cells in the body slowly begin to die off because they are no longer supplied with food and oxygen to survive.

In the muscles, a lack of energy and subsequent death cause the visible symptom of rigor mortis. 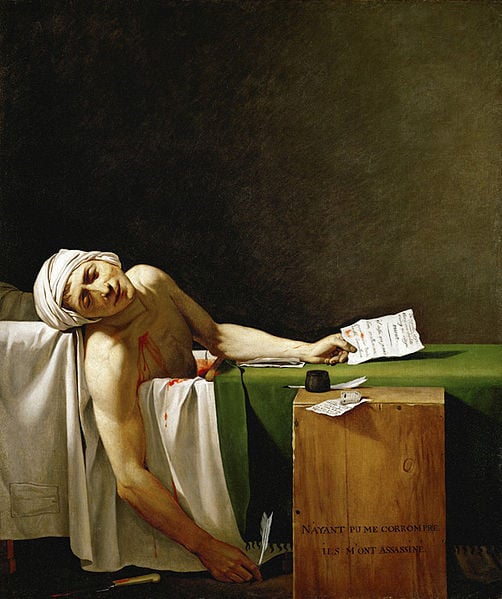 The Death of Marat by French painter Jacques-Louis David in 1793. Rigor Mortis can be seen here by how the subject clutches paper and quill. (Photo Credit : public domain/Wikimedia Commons)

Rigor Mortis doesn’t start immediately after death. Rather, it occurs in stages.

First, all the muscles in the body relax during a stage called primary flaccidity.

After approximately 2 to 6 hours, rigor mortis sets in, which peaks about 12 hours after death, but can last 24 to 84 hours post-mortem. After rigor mortis comes another (final) wave of muscle relaxation called secondary flaccidity.

These stages of death are caused by certain physiological changes occurring in muscle tissues.

Why does primary flaccidity occur?

Muscle contraction occurs on command from the brain. The brain signals a muscle to contract through the motor neurons, which in turn signal the muscles (by releasing the neurotransmitter acetylcholine). A series of changes occur in the muscles that make them contract.

After death, in the absence from that signal from the brain, muscles begin to relax.

How does rigor mortis happen?

A muscle contraction is done with the help of two special protein filaments called actin filaments and myosin filaments. Myosin pulls the actin filaments, which causes contraction. Think of it as someone pulling a rope to bring something closer. The picture of a muscle fiber, called a sarcomere, shown below should make the process clearer.

However, myosin also requires energy to pull the actin. It gets this energy from ATP, the energy currency of the cell. ATP is short for adenosine triphosphate, which means that it is an adenosine molecule with three phosphate ions linked to it. Removing a phosphate from ATP releases energy, which the cell uses to do work.

Contraction starts when an ATP molecule is broken down into ADP and phosphate. This gives the myosin energy to “stand up” and bind (or grab on) to actin. This binding between the actin and myosin is called a cross-bridge (like bridging two molecules). Once bound, myosin pulls the actin, shortening the muscle fiber slightly. 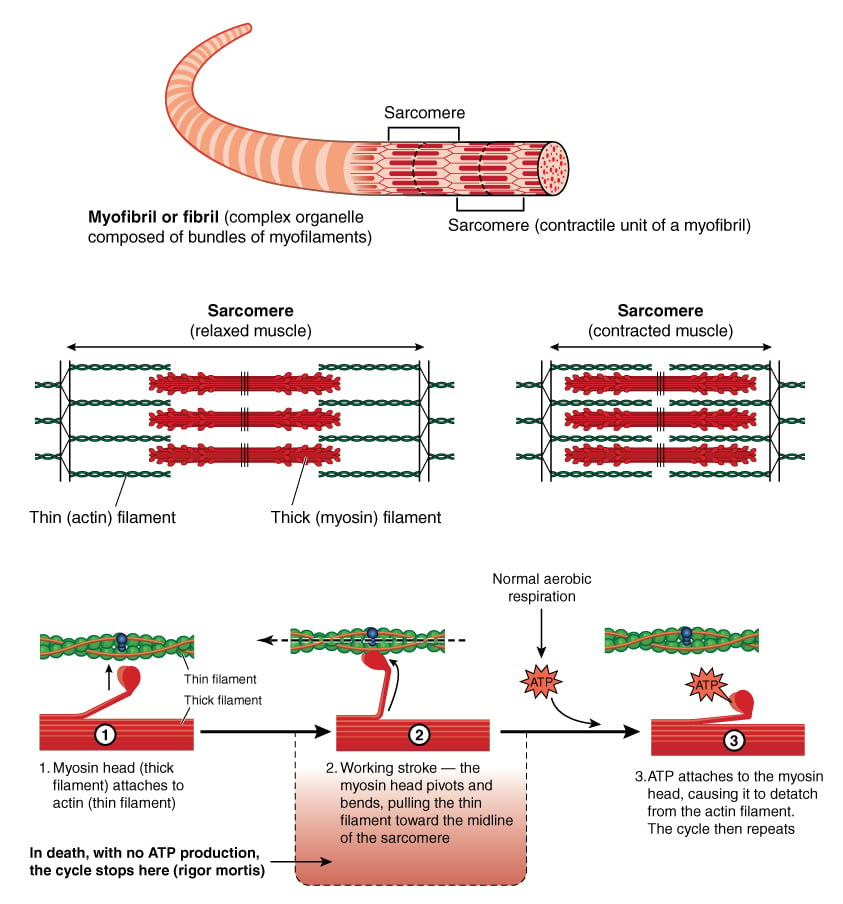 One single round of myosin pulling actin doesn’t cause a muscle to contract. This must happen multiple times for a full contraction. This means that myosin must detach from the actin filament and initiate a new round of pulling. For this, a new molecule of ATP must bind to myosin. This causes the myosin to leave the actin molecule. The ATP molecule is broken down (hydrolyzed) into ADP and phosphate, restarting the process.

Rigor mortis occurs because of two factors—a lack of ATP, which prevents myosin from detaching from actin, as well as the release of calcium from a compartment in the muscle cell as a result of autolysis.

Calcium ions are essential to start the contraction in the first place.

In normally functioning muscles, calcium into the muscle cell only when the brain sends a signal through the neurons. When calcium is released into the cytosol, it binds to a protein called troponin. Troponin, along with another associated protein, tropomyosin, are the gatekeepers of muscle contraction. They sit on actin filaments, covering up the parts of actin to which the myosin molecule binds.

When calcium binds to troponin, it causes troponin and tropomyosin to change its shape slightly so that they no longer cover the myosin-binding site of actin. The gates have been opened and myosin can finally bind to actin.

The second factor—the lack of free ATP—sustains rigor mortis for hours, but rigor mortis doesn’t set in immediately after primary flaccidity, and the release of calcium. There is a short delay where the muscles still have ATP molecules that allow the myosin to detach from actin.

The muscles have a reserve of ATP (in the form of a protein called creatine), as well as reserves of glucose in the form of glycogen (a bunch of glucose connected in a long branching string).

Even after the supply of oxygen to the muscle is gone, the muscles can still make ATP by anaerobically (in the absence of oxygen) breaking down glucose. This is what happens when you do intense exercise and the muscles don’t have time to wait for oxygen to make more ATP. With these two reserves in place, the muscles can relax back.

However, once these ATP reserves run out, the myosin can no longer detach from actin. When this happens and more myosin heads attach to actin, rigor mortis reaches its peak.

Rigor mortis starts almost simultaneously in every muscle; however, because of different thicknesses of muscle, some take longer to reach full rigor than other. The muscles in the face, such as the eyelids and jaw, are smaller and have fewer muscle fibers. The muscles in the torso and thighs are larger and would take more time before becoming completely contracted.

How does secondary flaccidity happen?

Rigor mortis doesn’t go on ad infinitum. Cellular degradation eventually catches up and begins to break down the actin and myosin proteins themselves. This causes a second round of relaxation called secondary flaccidity, which occurs in the same order as primary flaccidity and rigor mortis.

Summary of how rigor mortis occurs

How do forensic experts use rigor mortis to determine the time of death?

Rigor mortis is a fairly reliable method to estimate time of death. Post-mortem interval (PMI), as the time of death is known formally, is the time between death and when the body was discovered. Forensic experts use many different methods to determine PMI, rigor mortis being one of the most popular approaches.

The progression of rigor mortis is predictable and isn’t affected by external conditions. Temperature, however, does influence how fast rigor mortis progresses. At lower temperatures, rigor sets in faster and is prolonged for longer periods. The onset of rigor mortis is quicker if an individual has recently exercised or done any other vigorous activity.

Once the forensic expert knows about these other external conditions and any other evidence, they can use rigor mortis to approximate a victim’s time of death.