Algor Mortis is the second post-mortem sign of death. It is the change in body temperature after death to match the ambient temperature.

Most mammals, including humans, are homeothermic. In other words, we don’t have to sunbathe to increase our body temperature or lie in the shade when we get too hot like “cold-blooded” poikilotherms. This is because homeotherms maintain a constant internal body temperature.

The human body is maintained at approximately 37°C (96°F). When the ambient temperature threatens to change the optimal temperature, mechanisms in our body—controlled by the brain—take over and try to restore balance. When it’s too hot outside, we sweat to cool down (while other animals pant). When it’s too cold, we shiver, get goosebumps (though they don’t do much to warm one up), and curl up to conserve our body heat.

After death, these mechanisms stop working. As a result, the body’s temperature will begin to match the ambient temperature. This change in body temperature after death is called Algor Mortis.

What is Algor Mortis?

Why and How does Algor Mortis happen?

Algor mortis develops because the body’s temperature control mechanisms have shut off. These mechanisms include the master controller, the brain and the circulatory system (primarily).

The body controls its temperature through the circulatory system. The blood moves the heat generated by deeper organs like the liver or muscles to the outer organs, such as the skin, where it can dissipate. Heat is produced by metabolic reactions that occur in the body, such as the chemical reactions for muscle movement, or those required to digest food. 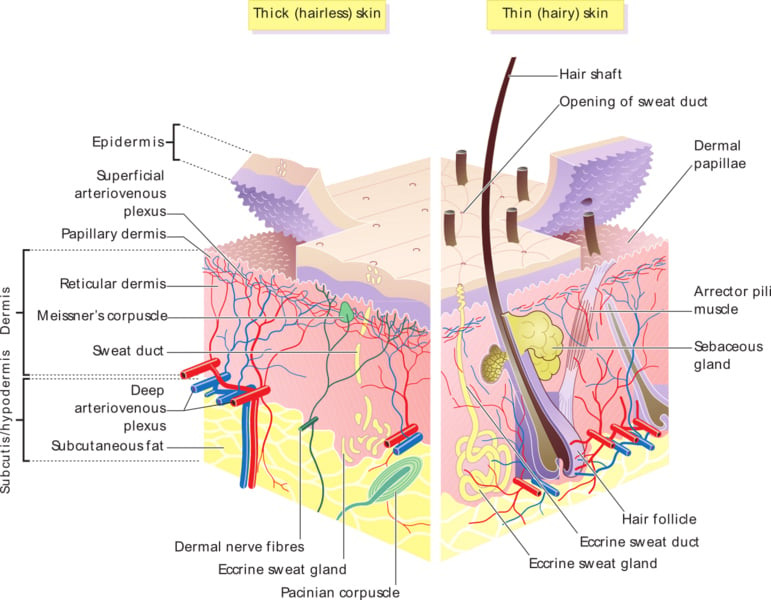 The layers of the skin. In the picture, one can see the capillary network in the dermis.  (Photo Credit : Madhero88/Wikimedia Commons)

There is a network of capillaries beneath the epidermis of the skin. These capillaries increase (vasodilation) or decrease (vasoconstriction) in diameter depending on whether heat needs to be released or conserved, respectively. The brain instructs the circulatory system to behave depending on the situation.

There are certain receptors in the skin that can ‘sense’ the temperature. These thermoreceptors give the brain a weather report and, based on this, the brain makes its executive decision. Without the brain and heart working, there’s no way for the body to control its internal body temperature.

There are more mechanisms that the brain employs to maintain 37°C than just changes in blood vessel size. These mechanisms involve generating heat by increasing metabolic reactions. Muscle movement generates heat, which is why one shivers when it’s cold.

After death, the metabolic rate of the body decreases. Although certain metabolic reactions are still occurring in the body, it’s no longer making new molecules or generating any energy.

The post-mortem interval (PMI) is the time interval between when the individual died and when the body was found. It is also called the “time of death”. Forensic experts and pathologists provide a time frame of 3 to 4 hours during which the individual could have died.

Algor mortis, though useful to calculate PMI, isn’t always the most reliable factor. The Glaister equation (also called the ‘rule of thumb’) is a general formula used to back-calculate the rate of cooling (when the ambient temperature is less than the body temperature).

The Glaister Equation is used to determine Algor mortis.

The Henssge Nomogram Technique is another method of using Algor mortis to calculate PMI. A nomogram is a graphical calculating device. There is a graph with different parameters, and matching one or more known parameters allows one to estimate a third unknown parameter using the graph. The Henssge nomogram takes into account the body weight of the individual and the rectal temperature to estimate the PMI. 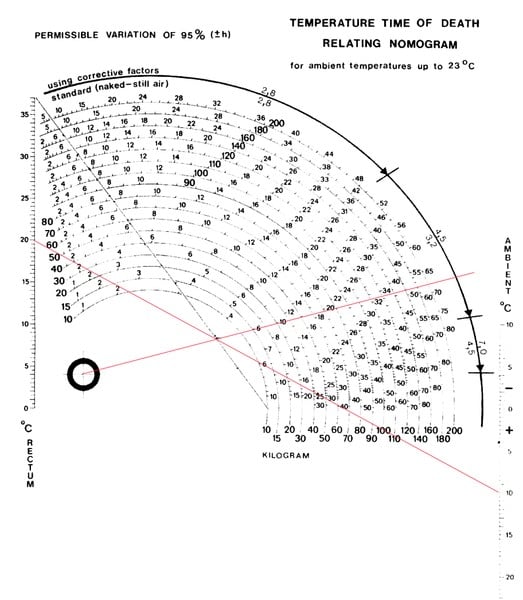 Calculating PMI using this formula should be restricted to the early stages of death, before 18 hours have passed. Even then, Algor mortis shouldn’t be the only indicator used to determine PMI. The rate of cooling (or heating, in rarer situations) varies depending on the location of the body. Was the body outside being exposed to sunlight or was it under shade? Was the corpse clothed or not, and were the clothes removed at some point after death?

Forensic experts don’t only record the body temperature, but also the ambient temperature when the body was found and temperatures over the past few days. When coupled with other collected evidence (other physiological changes the body goes through, such as rigor mortis and livor mortis, and insects at the sites), this can give forensic experts an approximate PMI.