Horseshoe crabs are an ancient group of organisms commonly referred to as “living fossils”. They are marine arthropods and belong to the class Merostomata, which means that their legs are attached to their mouths. Horeshoe crabs are vital parts of the ecosystem. Their blood has an enzyme which humans extract for certain diagnostic tests.

When someone says ‘prehistoric creatures,’ our minds tend to leap to dinosaurs that once roamed our planet millions of years ago. However, there are also species that were here long before dinosaurs appeared, and have survived to this day.

Take, for example, horseshoe crabs, which have been scuttling along beaches and cruising in and out of deep waters for over 450 million years. That is 100 million years before the dinosaurs even came onto the scene! What’s more amazing is that even though the dinosaurs were wiped out, horseshoea crabs have survived well into the 21st century.

What Are Horseshoe Crabs And Where Are They Found?

Horseshoe crabs are an ancient group of organisms commonly referred to as “living fossils”. They are marine arthropods and belong to the class Merostomata, which means that their legs are attached to their mouths.

Despite their name, horseshoe crabs are not actually crabs at all. Rather, they are closely related to trilobites, which existed 544 million years ago, as well as spiders and scorpions.

There are four species of horseshoe crabs found on our planet.

We find these organisms across different habitats depending on what life stage they are in. For instance, eggs are laid beaches, juveniles are found on sandy ocean floors and adults can be found in the deeper ocean.

How Have They Survived For So Long?

Horseshoe crabs have survived three major extinction events that wiped out most species in the past. Three adaptations, in particular, have helped to keep these species safe. First, their ability to feed on any organic matter has ensured that these organisms can survive anywhere and on anything.

Second, these species can survive habitats with fluctuating salinity levels. Thus, when their environment changes (for example, because of climate change), these organisms can simply move to safety. Third, they can live in low oxygen conditions, which is normally fatal for marine organisms. Last, their blood protects them by coagulating anytime they encounter bacteria.

Female horseshoe crabs grow up to 19 inches (48 cm) and are bigger than males, which only grow to about 15 inches (38 cm). Because of their clear differentiation in size, it is very easy to tell the sexes apart, particularly during the spawning season, when both sexes are present.

Overall, we can divide the body of horseshoe crabs into three sections: the prosoma (or head), opisthosoma (abdomen), and telson (tail).

We call these organisms ‘horseshoe crabs’ because of their heads, which are round and U-shaped and resemble a horseshoe.

The prosoma is the largest body part, and it contains the brain, mouth, heart, glands and nervous system, all of which are protected by a large plate.

The prosoma also protects the eyes… all ten of them!

Yes, you heard that right; horseshoe crabs have ten eyes. They use the two compound lateral eyes for finding mates, while the rest act as light receptors and help the organism determine changes in the moonlight, while also facilitating movement. 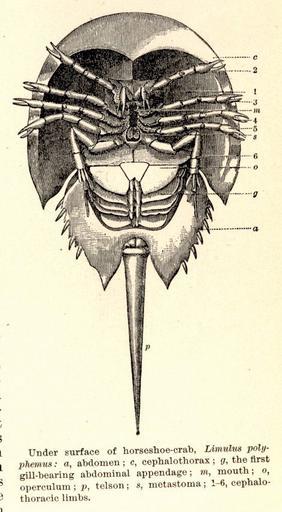 The abdomen is triangular in shape.

There are movable spines attached to the sides of the abdomen that help protect the organism. The underside of the opisthosoma is comprised of muscles and gills, which help with movement and breathing.

Horseshoe crabs can eat solid food because they have impressive digestive organs and systems. The mouth is found in the center of the body where the legs are attached. Because these organisms do not have teeth, they use their hind legs to crush food and then use the rest of their legs to bring the food to their mouth.

Also Read: What Is The LAL Test?

The tail or the telson is long and pointy. Unlike other animals, like the stingray, the tail of the horseshoe crab is not dangerous and is not used to sting other organisms. Rather, it helps the organism move in the water and also helps them flip over if they get stuck on their back.

The spawning season varies across regions, but usually peaks during May and June.

Adult horseshoe crabs patrol the shores waiting for females, and the females make their lives easier by announcing their arrival by emitting pheromones. By doing so, they ensure that there will be males on the shore to mate with. Males have special appendages that allow them to clasp on to females while mating.

Each female develops around 100,000 eggs during each spawning season and will lay 4-5 clutches of eggs containing 4,000 eggs each time she comes back to shore. 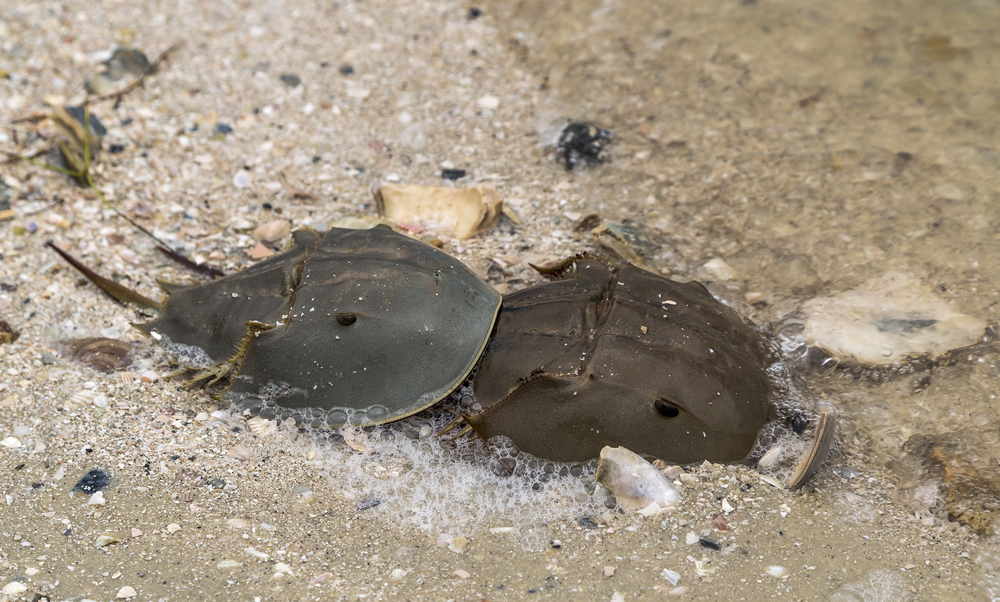 Male and female horseshoe crabs mating. Can you guess which is the female by its shape/size? (Photo Credit : Drew Horne/Shutterstock)

Horseshoe crabs live for over 20 years, during which they go through four stages of a life cycle– egg, larva, juvenile and adult. These species lay their eggs higher on the beach, where there is more warmth. The eggs hatch after two to four months, after which the larvae emerge. The larvae look a lot like miniature versions of adults, but without tails. 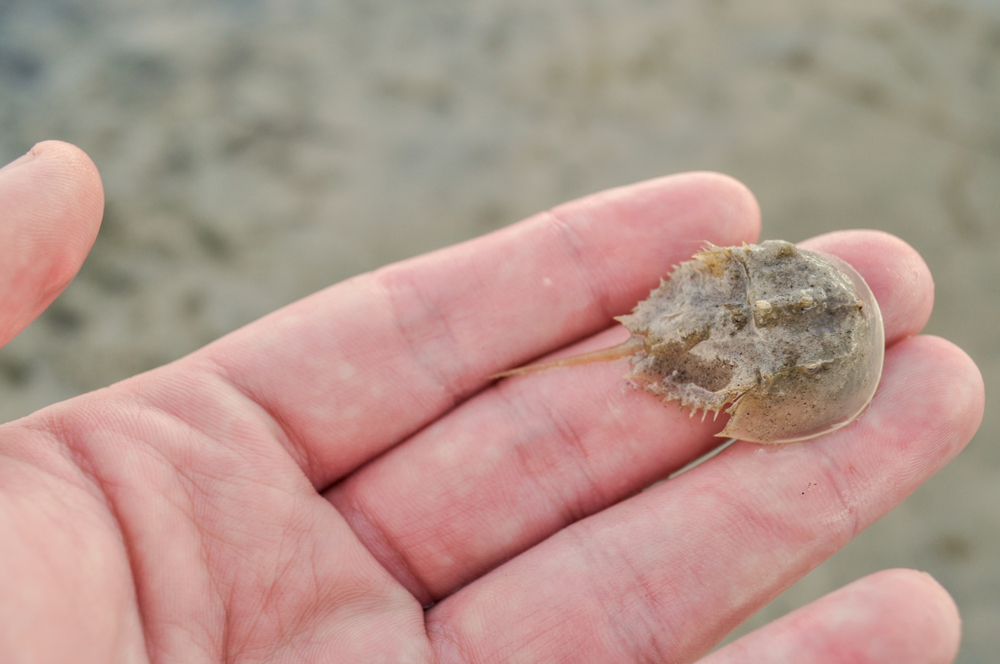 The larval crabs then swim into the ocean nearly a month later when there is a high tide. They rest on the sandy bottoms for a year. As they grow into juveniles, they move into deeper waters, where they feed on adult food. Juveniles molt over the next ten years, during which time they keep shedding small exoskeletons to make way for larger ones. They usually develop into full-grown adults after ten years.

Why Are Horseshoe Crab Important?

Horseshoe crabs play a vital role in our ecosystems.

Their eggs are a source of food for many shorebirds, many of whom have actually adapted their migration patterns to coincide with the crab spawning season. Their shells also provide microhabitats for smaller species like snails and mussels, and their larvae are food sources for several fish and invertebrates, including crabs, fish and turtles. 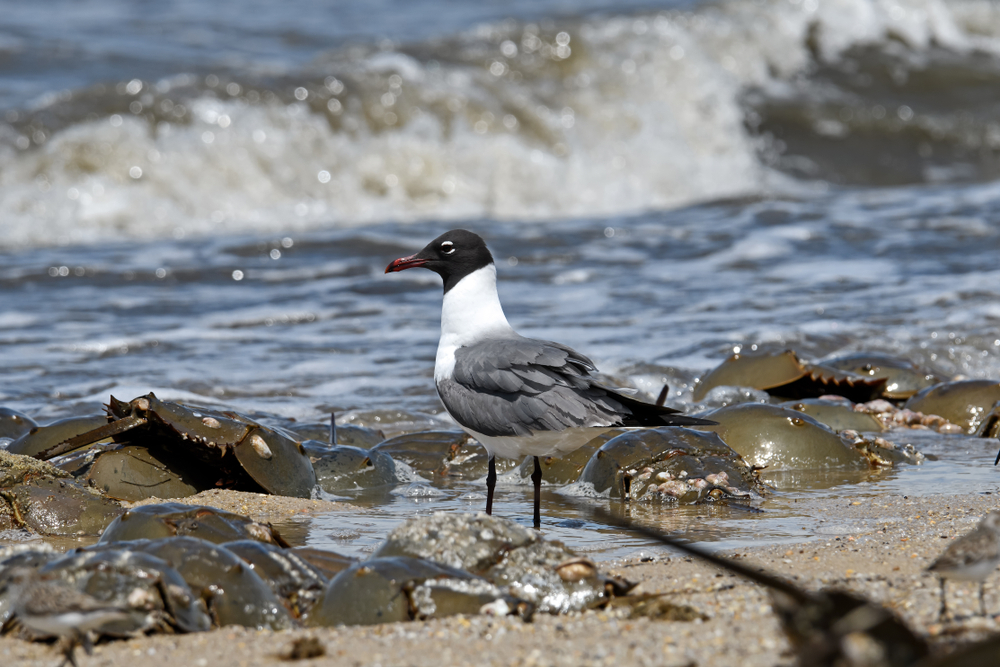 To begin with, their nesting sites are becoming more and more disturbed due to a higher human presence on beaches, forcing them to choose newer locations to nest.

The construction of seawalls or barriers to their nesting grounds further threaten these species.

Similarly, the removal of sand (for construction) or depositing sand (to replace erosion) alters their nesting sites. Sand brought in from other locations can affect their development, as they may vary in temperature and moisture content. In open waters, their populations are threatened by the use of mechanized trawlers and fishing nets, which can easily ensnare these creatures.

However, one of their most pronounced threats is the biomedical industry. If you’ve ever been vaccinated (like most of us) or have taken intravenous fluids, then you probably owe a huge thanks to horseshoe crabs!

Most of us fall ill when we’re exposed to bacterial endotoxins, even more so when these toxins enter our bloodstream directly (e.g., when we receive injections). It is actually the blood of these horseshoe crab species that is used to check the safety of vaccines, injectable drugs, and medical equipment. 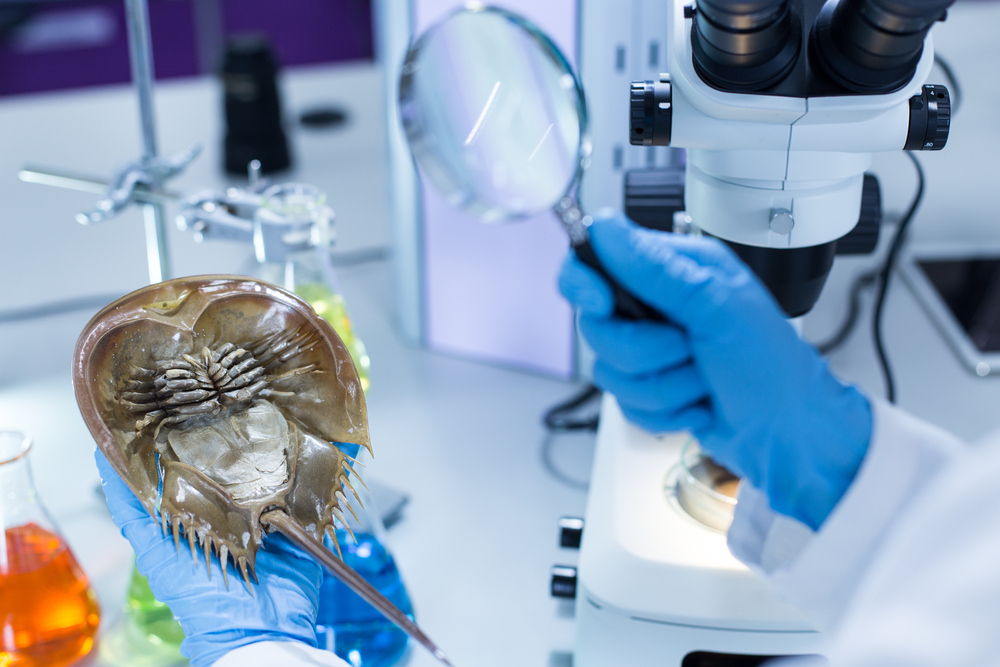 How is it done?

Well… horseshoe crabs have an open circulatory system and have survived centuries with its innate immunity backed by amoebocytes (or blood cells). Amoebocytes release a clotting agent called Limulus Amoebocyte Lysate (or LAL) when bacteria or foreign substances enter the bloodstream of the crab. This agent induces blood clotting when bacteria enters the bloodstream and prevents it from spreading further. When scientists made this discovery, they developed the “Limulus Amebocyte Lysate” test or “LAL” test.

Also Read: What Are Sand Dollars?

Today, this test is used to check the quality of biomedical drugs and medical devices. As a result, horseshoe crabs are commercially harvested across the United States by cosmetic and biomedical companies, which has resulted in severe declines in their populations.

After reading about these species, I’m sure you would agree that horseshoe crabs are quite amazing, and deserve our respect and protection!