A starfish moves with the help of tube feet. These are present on its bottom surface and result in very slow movement. Water helps to displace the creature and allow it to remain stable, but mobile!

During your long walks on the beach, have you ever taken a step back and noticed the creatures around you? The crabs, the birds, and most importantly, the starfish? If not, then you’ll certainly take note after reading this article! Not only does the starfish have a gimmicky name, but it’s also a pretty enigmatic creature! Few animals are clever enough to leverage water to their advantage like a starfish. How? Let’s find out! 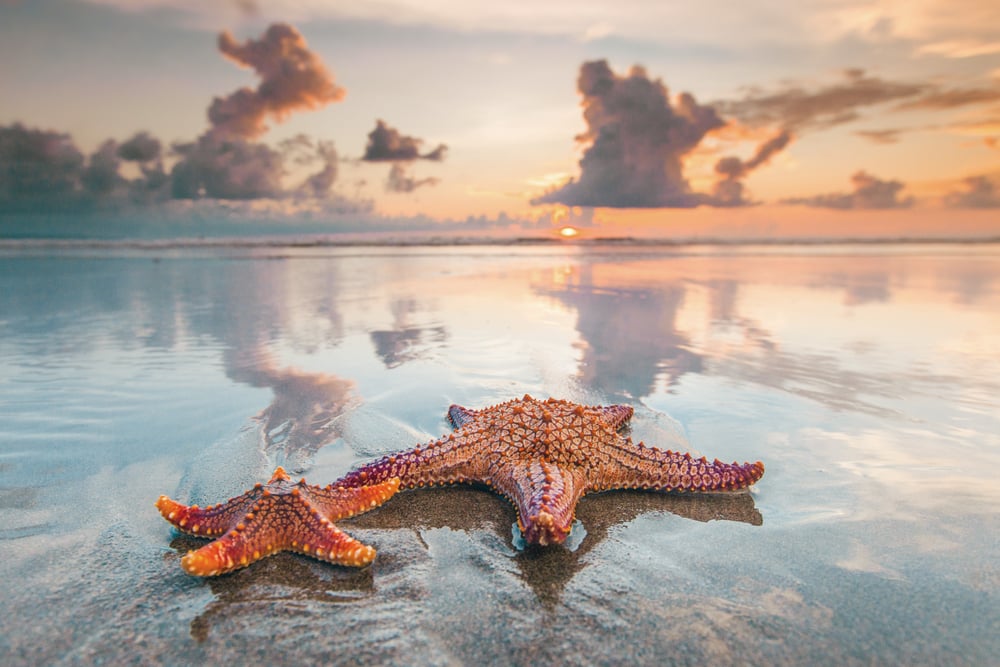 The means of locomotion for a starfish is through their tube feet. A starfish has thousands of these tube feet on its lower surface. When water enters the canals inside the body of a starfish, it eventually reaches these feet. A series of contraction and relaxation procedures take place, which displaces the animal from one place to another. Pretty cool! Now, let’s take a more in-depth look to understand this all a bit better!

What Is A Starfish?

Starfish are also known as sea stars. Interestingly, ‘sea star’ is also a more correct way to refer to this animal, because a starfish is nothing like an actual fish! It doesn’t have a streamlined shape or any fins for swimming. Scientifically, a starfish is actually an Echinoderm. The term echinoderm comes from the Greek language, which means “hedgehog skinned”. It is an entire phylum of zoological classification, and several other famous animals fall under this category, such as octopuses! A sea star stuck on a rock (Photo Credit : Vojce/Shutterstock)

Sea stars are free-living marine animals that are often found on sandy or muddy bottoms, crawling over rocks and shells. From tide marks to deep waters, these creatures are found everywhere. All sea stars are carnivores, meaning that they feed on other smaller animals, including small crustaceans and mollusks. On a hard surface, such as rocks or sand, sea stars move very slowly. They adhere firmly to these surfaces with their tube feet by creating a vacuum.

What Is The Water Vascular System In A Sea Star?

Now, if a sea star doesn’t have any fins or legs, does it just remain attached to one place forever? Well, the obvious answer is no! So how does movement take place? For that to be understood, we need to look at the general anatomy of a sea star. Don’t worry; sea stars are not very complex organisms. As such, they don’t have elaborate body systems like us!

The water vascular system is primarily responsible for locomotion in all Echinoderms, including the sea star. It is a system of canals inside the body of the animal that contain seawater. The water vascular system also contains the madreporite, which is a sieve-like plate located on the lower surface of the sea star. It has very minute pores that filter the water and transfer it to the stone canal, which lies beside it.

Also Read: How Do Jellyfish Function Without A Heart Or Brain?

Caption: Representation of the water vascular system in the sea star 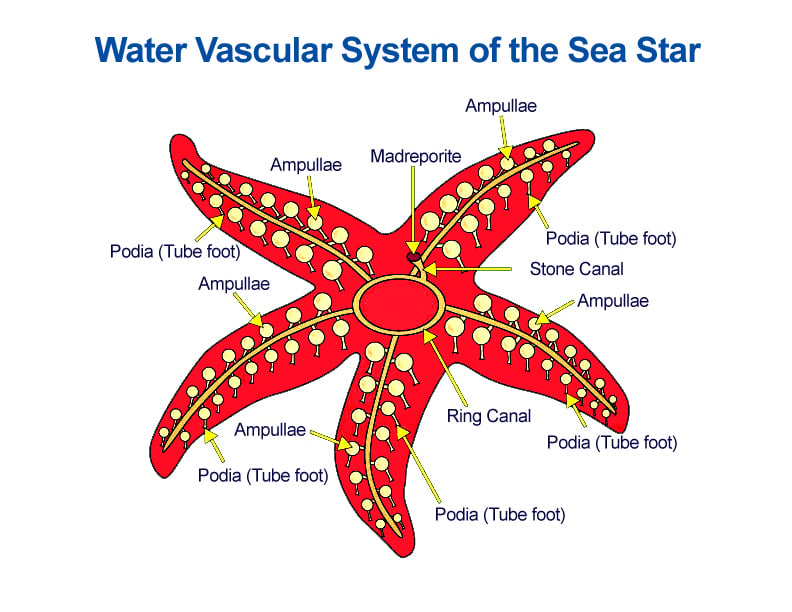 The stone canal has that name because hard rings support it. This canal then connects to the ring canal, which gets its name because it has a pentagonal shape. Through the five points of this pentagonal canal, more canals arise and terminate into each foot of the sea star. These are called the radial canals. Now comes the star of the system—the tube foot. Two double rows of tube feet line the radial canals, and are connected to the canals via tenuous links. These connections are called lateral canals.

This whole system of canals might sound a little intimidating, but the whole picture becomes clear once you consider the movement of water!

How Does The Sea Star Move?

The water vascular system is critical to the movement of a sea star. It helps in setting up hydraulic pressure, which pulls in the water. All the tube feet have a swollen structure called the ampulla, which end at a thinner base that forms the podium. The podium consists of suckers that help in adhering to the ground.

When the water is taken inside this system through minute hair-like parts, it travels from the madreporite through the stone canal, the ring canal, the radial canals, and finally, the lateral canals. This then reaches the ampulla, where the water is maintained at all times. When the ampulla contracts, it forces the water towards the suckered podium, which results in their extension. This helps in detaching an arm of the sea star from the surface. The animal may then choose a different point of attachment, which brings about another displacement in its position. After it reaches the position where it wants to stay, the ampulla relaxes. This relaxation causes the formation of suction cups. The suction cups create a vacuum and help to adhere the sea star to the surface. After both the steps are completed, the sea star has reached an entirely new location. As such, even though the motion is slow, it is quite effective!

Also Read: What Are Sand Dollars?

An interesting thing to note is that the water vascular system is functional at all times. The water inside the canals and the ampulla of the tube feet are present 24/7. Thus, a sea star can move from one place to another whenever it wants, and doesn’t need to wait for a wave of water to change location.

There are some things that sit right in front of our eyes, but we never really appreciate how wonderful they truly are. In my opinion, starfish certainly fit in that category!