Unlike humans, the “eyes” of most jellyfish are not concentrated in a single organ; instead, the ability to see is facilitated by a network of nerves and proteins called opsins.

Imagine that you’re wading out into the ocean with a snorkeling mask on your face, the sun beating down on your back. As you slip under the Caribbean waters and open your eyes, eager to catch your first glimpse of tropical fish or colorful coral, you come face to face with a tiny, transparent mass of tentacles just a few feet away. You’ve stumbled onto a jellyfish, and while they’re beautiful, they can also be dangerous! You slowly wade backwards through the water, hoping that the jellyfish won’t spot you and make any aggressive moves in your direction. 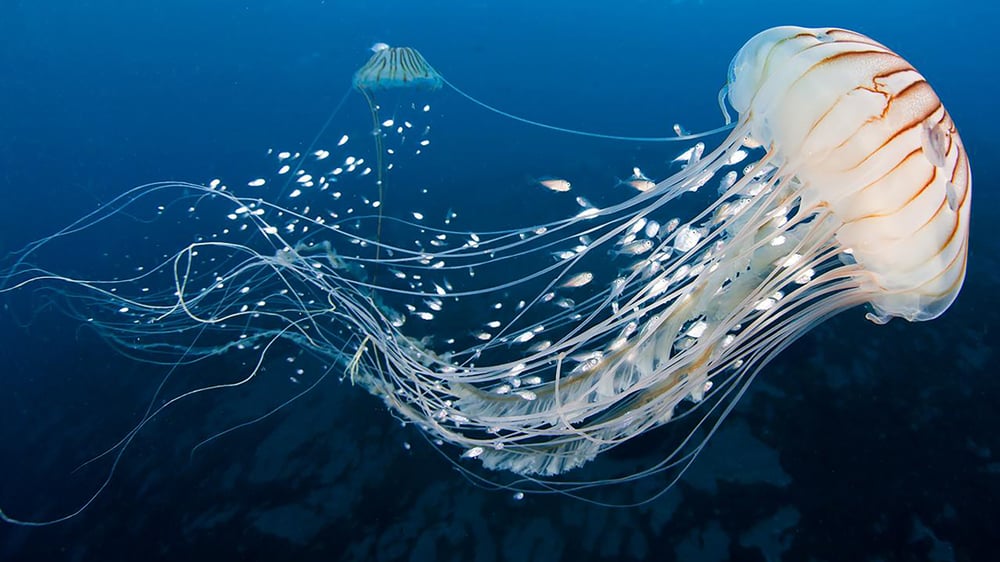 At that point, an important question hits you… can that jellyfish see me? Do jellyfish even have eyes?

Jellyfish: Not Too Complicated

When talking about jellyfish anatomy, the conversation is usually quite brief. In comparison to the vast majority of animals that we are familiar with, jellyfish are quite simple. Jellyfish lack a brain, a heart or bones, as well as every other critical organ that we cherish as human beings.

Jellyfish are members of the Cnidaria phylum, and can’t scientifically be classified as fish, who belong in the phylum Chordata. In fact, jellyfish are a type of plankton, and are related corals and sea anemone, which form the foundation of most marine food chains.

These evolutionary ancients, having been on Earth for 600 million years, are physiologically simple. Their body is mainly composed of water – about 95 to 98%, along with a short list of body parts.

The jellyfish is basically a sandwich of two cellular layers—the outer epidermis and the inner gastrodermis layer. Between these two cells is a thick, jellylike fluid called the mesoglea, hence the name jellyfish.

The jellyfish has a single opening that serves as both a mouth (orifice) that takes food in and an anus that excretes it out. The mouth leads to the gastrovascular cavity, a rudimentary stomach where the jellyfish digests and absorbs the nutrients from its food.

The last element of their physical structure, and what most people associate with these cnidarians, is the tentacles. While these can vary widely in terms of length and number, they are arguably the most important body part of any jellyfish. They are also the primary sensory organs for these basic creatures, even giving them the power of “sight”.

Do Jellyfish Have Eyes?

When we think of eyes, it is natural to picture them as structures similar to our own, but the variety of eye and sight-providing organs in nature is immense. There remains an intense debate over whether eyes developed once or multiple times throughout the evolutionary tree of life on Earth. The consensus is that some sort of light-detecting mechanism was present in an early ancestor of sighted animals, and the diversity of how that genetic programming developed remains a source of fascination for researchers.

Also Read: How Do Jellyfish Function Without A Heart Or Brain? 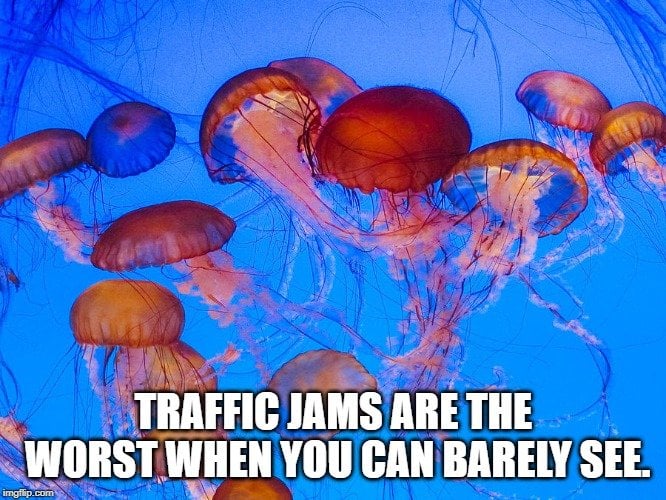 The even more fascinating bit is that jellyfish do have eyes. Their eyes don’t look much like ours, except the box jellyfish, who we’ll discuss later, but they’re good enough to detect basic light signals. The light signals are sent to the jellyfish’s rudimentary nervous system, which looks like a net, so researchers cleverly called it a nerve net. Slightly more complex jellyfish have a nerve ring, a set of nerves that border the jellyfish’s bell, its floaty head-like structure. The nerve ring is the closest thing to a central nervous system the jellyfish has and as we’ll see later in the article, they are a bit of a mystery for scientists.

The jellyfish’s light sensing organ lies within a structure called the rhopalia, which lies at the edge of the jellyfish’s bell. If you look at the picture of this ethereal moon jellyfish, you’ll see that the margin of its bell isn’t straight, it curves inward. Those inward points in the bell are where the rhopalia is located. 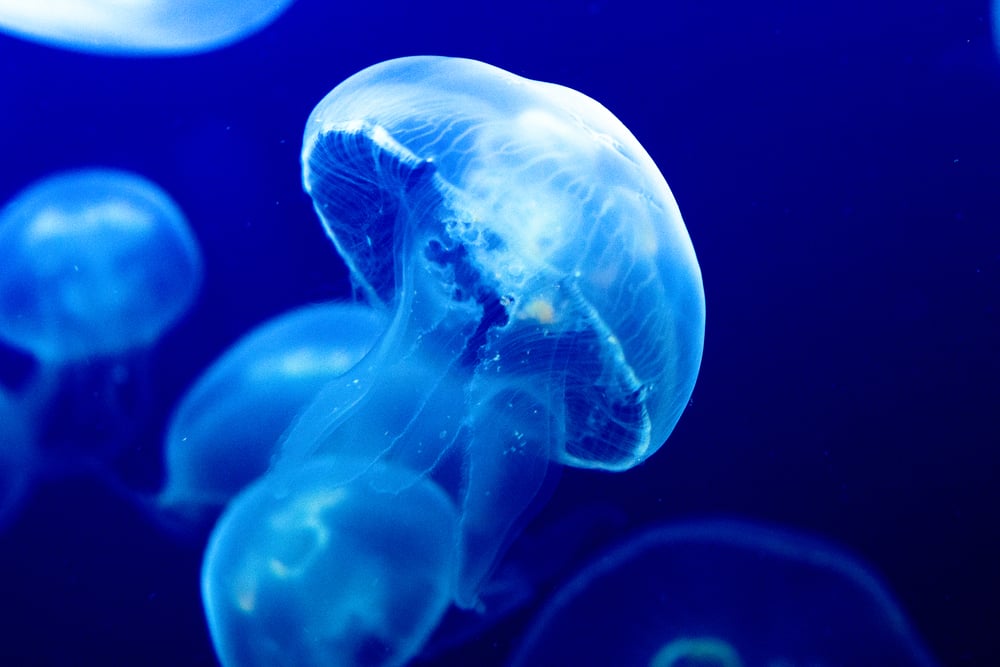 The rhopalia are located in the margin of the bell where it curves inwards. (Photo Credit : Wende Images/Shutterstock)

Within the rhopalia are structures that help the jellyfish balance, so it can distinguish when it is right-side up, as well as a light-sensing organ called the ocelli. The rhopalia are special in that they have nerve nodes that are concentrated and organized sets of neurons, unlike the dispersed nerve nets in the rest of their body.

The moon jellyfish and many of its brethren from the class Scyphozoa have a pretty rudimentary oceilli. It can detect light and its intensity, but nothing more than that.

Box jellyfish leveled up to eyes that are much like our own eyes, complete with a retina, cornea and a lens. The box jellyfish Tripedalia cystophora, has 4 rhopalia, within each of which lie 6 eyes, making a total of 24 eyes! Out of the 6 eyes, two—the upper and the lower lens eyes—have complex structures like our own, while the other 4 are more primitive.

The box jellyfish Tripedalia cystophora. On the right is a zoomed-in view of the eye structures in the rhopalium (Photo Credit : Jan Bielecki/Wikimedia Commons)

This sight, both the simple one of the moon jellyfish and the more detailed one of the box jellyfish, is due to opsins, proteins that can detect light. These opsins are similar to the opsins that allow humans to see the world around them. When light hits these opsins, a series of complex biochemical changes occurs that finally leads to the activation of neurons, which allow the jellyfish to respond appropriately to the light stimulus.

With these eyes, Tripedalia cystophora can actually see, much how we do, although the vision might be a little blurry. Scientists have observed the box jellyfish using its sense of vision to identify habitats that it prefers, such as among the roots of mangroves, or find prey. Some jellyfish varieties, like the box jellyfish Carybdea sivickis, perform mating rituals characteristic of animals with far more sophisticated nervous systems.

Also Read: Can Animals Have A Third Eye?

These behaviors, scientists think, are due to how the nerve ring integrates the incoming information from the environment, producing the output of a behavior. However, researchers don’t know how the nerve ring does it. So, although we call the jellyfish’s nervous system “primitive”, it still holds a few fascinating secrets!

How much do you know about jellyfish sight? 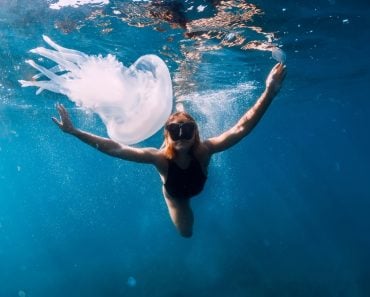