Habitats are places where an animal or plant lives, or where one would go to find them. They may be terrestrial habitats (forests, deserts and grasslands) or aquatic habitats (ocean, rivers, lakes). A niche, on the other hand, is the aggregate of the position of a particular species within an ecosystem, the conditions it requires to survive in that particular habitat, and the role that it plays in said habitat.

We all have a place that we like to call home. For some of us, it’s an apartment, while for others it is an independent house, or something else altogether! No matter what or where, most fortunate humans have a place to live. Along with our homes, we also have a home address that helps people locate us in the world.

Now, this seems pretty simple and straightforward for humans, right? What about animals and plants? Do they also have “homes” and “addresses”?

If you guessed yes, that they do have “homes” and “addresses”, then you’re absolutely right! Just like us, members of the animal and plant kingdom also have their own homes, which are commonly referred to as habitats.

A habitat is a place or region where an organism lives, or the area where one would go to find it. Habitats are natural environments with specific conditions that sustain animal and plant populations. This means that a habitat will have all the requirements for an organism to gather food, reproduce, and take shelter within it. In general, habitats are characterized by different biotic and abiotic factors, such as water, soil, topography, moisture, temperature and food availability. These are the fundamental factors that determine the distribution of organisms and habitats across the world.

Let’s take a quick look at some of the most well-known habitats on our planet.

Forests are large areas dominated by trees. They are found across different latitudes, elevations and climates. For instance, coniferous forests are found in colder climates, whereas rainforests are found in regions with warmer climates. Globally, over 31% of the world’s land surface is covered by forests, and they are key habitats for several major species, including elephants, tigers, monkeys, hornbills, butterflies, spiders and ants. Interestingly, 80% of the world’s terrestrial biodiversity is said to be found in forest habitats. They also play a critical role in human livelihoods and wellbeing.

Deserts are habitats that do not receive much rainfall. Most deserts across the world receive less than 10 inches of rainfall each year. Usually, evaporation occurs more than rainfall, which is why it’s so difficult to find water in these areas. Deserts can be classified as cold or hot, or coastal or semiarid, based on their temperature, precipitation, evaporation rates, humidity, and location. Although deserts are harsh habitats to live in, many plant and animal species have adapted themselves to survive in such environments. The most commonly known species that have adapted to these habitats include cacti, kangaroo rats and desert foxes. 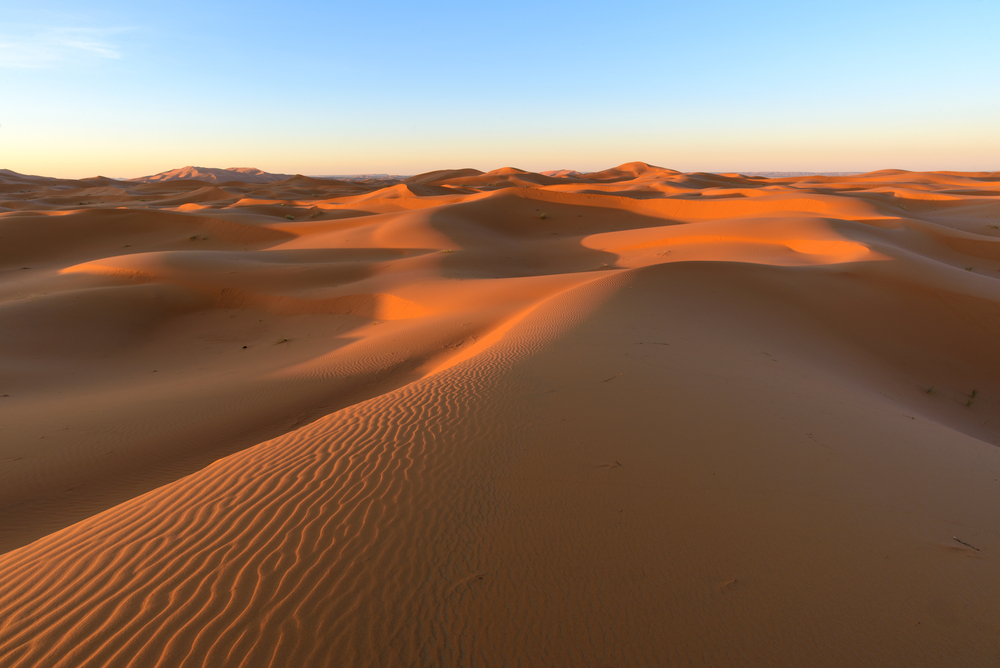 Can you spot any plant or animal life in this habitat? (Photo Credit : Filipe B. Varela/Shutterstock)

Grassland habitats occur in regions where the rainfall is too limited to support the growth of trees. These ecosystems receive more rainfall than deserts, but a lot less than forests. Grasslands are dominated by grasses of varying lengths, sedges, short shrubs and woody plants. They are found in almost all regions of the world, except in Antarctica. Grasslands are particularly fragile because they receive less precipitation. They are also one of the most vulnerable habitats in terms of habitat destruction and conversion. However, these ecosystems are vital habitats for several species, such as rhinos, zebras, antelopes, wildebeests and lions. 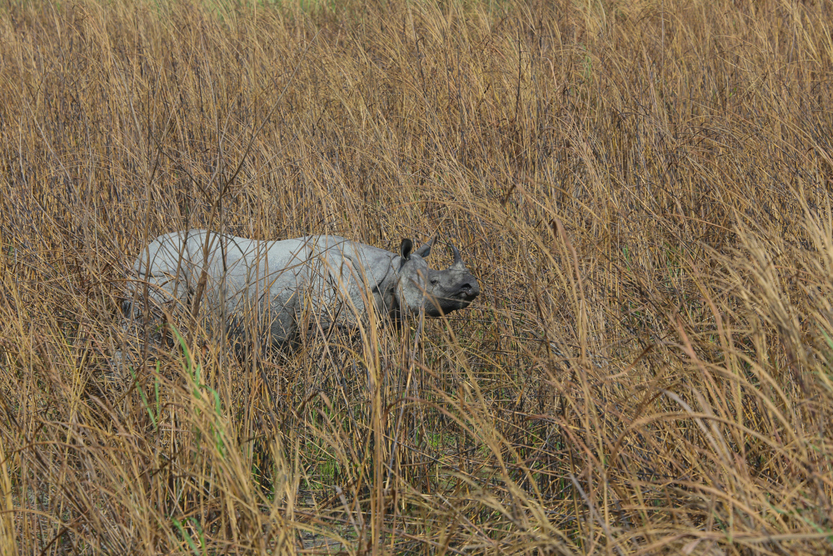 Aquatic habitats comprise numerous ecosystems, including oceans, rivers, lakes, estuaries, swamps and marshes. These habitats are divided into two broad groups—marine and freshwater habitats. Marine habitats (oceans and salt marshes) cover 71% of the world’s surface, making them the largest ecosystem in the world. They are different from freshwater ecosystems, as their waters are salty in nature. Marine habitats are quite unique because they harbor a wide variety of life forms, including birds, mammals, insects, fish and bacteria. Some well-known species that live in these habitats are whales, dolphins, starfish and corals.

Freshwater ecosystems, on the other hand, lack any form of salt content in their waters. These ecosystems (rivers and lakes) are particularly important for humans, as they provide drinking water. They are also very important habitats for numerous fish, crustacean and mammal species. Unfortunately, freshwater ecosystems are spread across an extremely small portion of the earth’s surface; they are also considered limited resources and are heavily exploited by humans.

Interestingly, in many ecosystems, one will find habitats within habitats (microhabitats). A microhabitat is part of a larger habitat, but is much smaller in size and spread. It provides specific conditions (temperature, light, humidity) that certain organisms need for their survival. Such habitats provide alternative food sources and shelter, particularly for smaller species ,such as frogs, insects and fishes. For instance, a log or a rock may become a microhabitat for different insect, frog and fungi species. 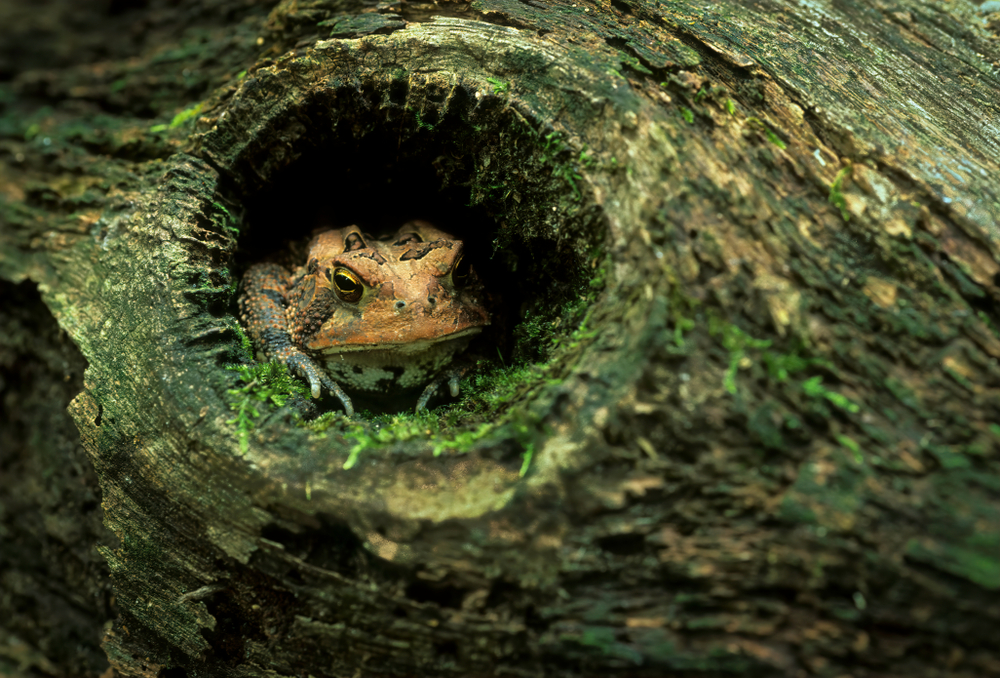 A toad resting inside its microhabitat– a log (Photo Credit : Gerry Bishop/Shutterstock)

When talking about habitats, you have likely heard the term “niche” or “ecological niche.” An ecological niche defines the position of a species within an ecosystem (or ecological community) and describes the conditions it requires to survive in that particular habitat. It also defines the specific role the species plays in the habitat. Think of it this way, a habitat refers to the “address” of an organism, while a niche refers to its “profession.”

Let me explain this a bit more with an example. Emperor penguins live in regions with freezing temperatures. They are capable of hunting underwater at low temperatures, and their prey usually consists of small fish and crustaceans. On the other hand, emperor penguins are also preyed upon by other animals, such as whales. All these characteristics jointly make up its ecological niche. Thus, ecological niches tell us a lot about how a species lives, what conditions and resources it needs to survive, and the way it interacts with its habitat, as well as with other species.

I hope you learned a bit about habitats and niches through this article. If you would like to take your learning one step further, here’s a fun activity for you! The next time you find yourself in the wilderness, try to observe your surroundings. Try asking yourself, what habitat am I standing in? What are the species that live here, and what role do they play? Can I find these species and/or this habitat elsewhere in my city or are they only found in this particular location? Don’t forget to share your findings with us!