A spherical lens in fish helps compensate for the lack of refraction and focuses the images better on the fovea—the area of sharp vision.

Have you ever opened your eyes underwater only to find that everything is blurry and out of focus? “Is this what sight is like for fish?” you wonder, “Or do they have specialized ways of seeing underwater?”

Well, not quite. To help us understand how a fish sees, let’s “look” at this subject through the “lens” of anatomy, evolution and optics. The rounded eye of a fish (Photo Credit: Kletr/Shutterstock)

The Basic Structure of An Eye

The eye has a very complex structure and function. The basic structure and function of the eye is more or less the same for all vertebrates. It had taken slightly less than 100 million years to form. For the sake of this article, we will only be looking into three basic components—the lens, the vitreous humor, and the fovea.

When light enters through the eye, it passes through a lens and the vitreous humor. The vitreous humor is a water-like liquid, while the lens helps focus light onto the fovea. The fovea is the part of the eye where sharp images are formed. In other words, it is the part that allows us to see clearly. The complex structure of an eye. For now, just focus on the lens, vitreous and fovea (Photo Credit: Designua/Shutterstock)

Seeing underwater is very different from how we see on land. Firstly, water absorbs light far more than air does. This makes things darker the deeper you go. For the sake of this thought experiment, we will only look at vision to a depth of 80 meters, as light does not go below that point.

Second, water “absorbs” red light the most, followed by orange, yellow, green and then blue. This means that everything underwater will appear a bit more “blue”. Things will get even bluer the deeper you go.

However, that is not the only property of light underwater. Let’s look at the property that makes everything underwater a bit blurry.

Why is everything blurry underwater?

Water is denser than air, so light travels slower underwater. Although we don’t notice this slight time difference, it has other effects.

A common term you might hear in optics is refraction. Refraction is the bending of light when it travels between media of two different densities. One example would be when light travels from air to water. This is why a pencil will look like it’s broken or bent when you put it in water. When light travels from a less dense medium to a more dense medium, it converges. That means it comes together. When light is focused at a certain point in the eye, it creates a sharp image, which is done by the lens.

The way the lens in an eye works is by converging light. For an image to be clear, light must converge exactly at the fovea. If the light is not focused on the fovea, it creates a blurry image. The effects of a sight defect (Photo Credit: VectorMine/Shutterstock)

So, how do fish see clearly?

When light travels into the eye underwater, it doesn’t get refracted very much. This is because the densities of the vitreous humor and water are very similar. That is the job of the lens; the lens, being denser, refracts the light more, thereby focusing it. The lens, being quite round, makes light pass through it for a longer distance, refracting it more. This makes light converge at the right point. If the lens was flatter, it would not converge at the right point, as described above. The spherical lens of a fish (Photo Credit: Gretarsson/Wikimedia commons)

The other reason is that the angle at which the light passes through the lens is greater. This is because of the curved surface of the lens. According to Snell’s law of refraction, this makes the refraction higher. This causes the light to focus on the fovea, making images sharp underwater.

The spherical lens also warps images. From our perspective. the way a fish sees its surrounding will be a bit curved. This adaptation also gives them a wider range of vision!

Humans and other land animals have flat lenses because they help us focus in the medium of air, while fish have a more rounded lens to help them focus in water.

You might be thinking that this is a cool adaptation for fish. That’s true, as sight in fish is very evolved and complex. However, in reality, it is the sight of terrestrial animals that has adapted more impressively. Life started in water, meaning that the lens of the fish was the “original blueprint”. An image from a fisheye lens. Things look more warped and curved, but you get a wider field of vision (Photo Credit: Marco Brockmann/Shutterstock)

When animals came onto land, their eyes adapted to have flatter lenses. This occurred as a way to adjust to the “extra” refraction. The flattening of the lens helped adjust for the change of density from water to air, but what about other animals that went back to water?

Some animals, like dolphins, were originally land animals that returned to marine environments 50 million years ago. When these animals started to move into the water again, they once again adapted to have spherical lenses. In addition, some species, like dolphins, started to have flatter front portions of the front part of the eye, which helped focus the light even more.

The round lenses of a fish had the added advantage of a wider range of vision. This helped them by allowing them to see more around them. This helped them look more closely for both food and foes! Land animals adapted to have flatter lenses so that everything would be less distorted, just like the images produced by a fisheye camera lens! 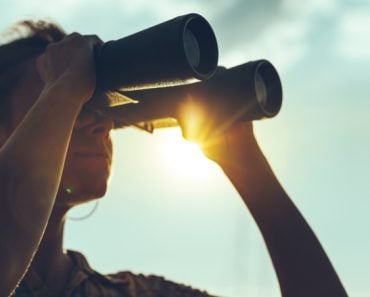