There are many animals that are transparent, especially underwater, where transparency helps aquatic creatures hide from predators.

All animals strive for one thing: survival. As humans, we might not always have to watch our backs, but other animals certainly do. This is particularly true for those who are at the top of the menu for predators that surround them. Survival is hard, as not everyone can be at the pinnacle of food chains.

Naturally, some animals found a smart way to trick their predators. They camouflaged, but that also comes with its own shortcomings: What if there’s no substrate to blend in against, leaving them with absolutely nowhere to hide?

To combat that crisis, some animals evolved to simply hide in plain sight! If being transparent provides top-tier protection against predators that want to hunt you down, why is it that we aren’t constantly bumping into invisible creatures?

Animals are composed of many organs and tissues, which have their own thickness and chemical makeup. As a result, an animal’s body is far from something that would let light through it, without that light being reflected, absorbed, scattered or refracted first.

Water-dwellers have a clear advantage in terms of transparency, as their bodies are almost all water. Being transparent as a land-dweller is, however, a lot more difficult, due to refractive indices (a fancy word that explains how light slows down when it enters a particular medium).

The air we breathe has a very low refractive index, but water has a notably higher value. Think about looking at a pint glass on a sunny day… it probably has a glare on it, yeah? Now, what if you put the same piece of glass in water? Call it a crystal, because it’s just as clear. 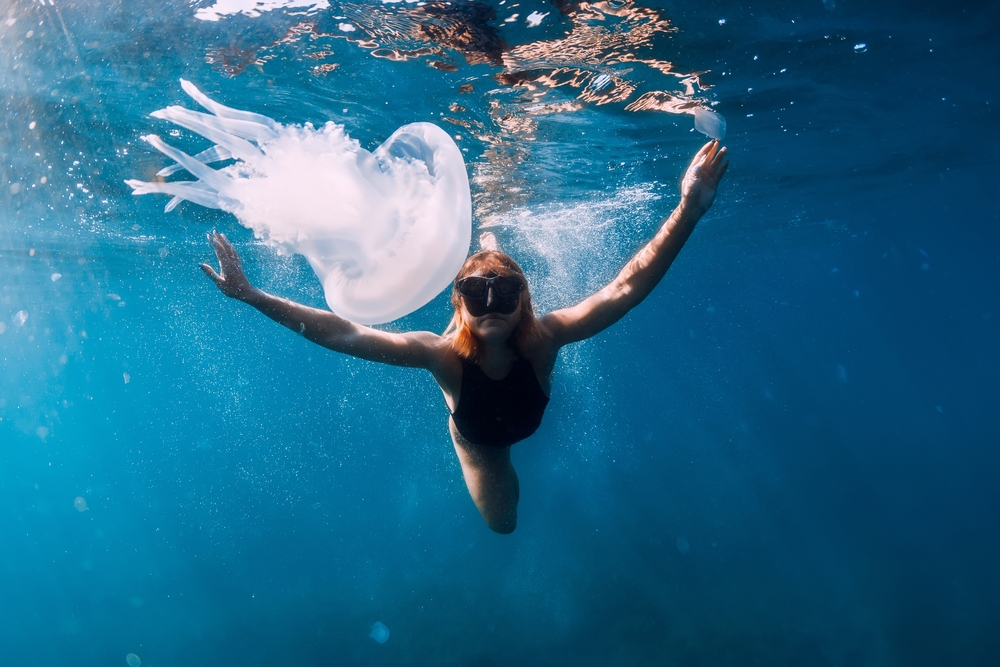 Therefore, if water has a high refractive index, as does the material that makes up certain oceanic animals, then there’s hardly any scattering of light. Suddenly, poof! You can’t see them anymore.

When you think about it, transparency is an ideal form of camouflage. Check these animals out, but you’ll have to look close, or you’ll miss them entirely!

Animals That Use Transparency To Hunt

Macropinna Microstoma, also called a barreleye or spookfish, was aptly described as a fish with “a clear bubble-like astronaut’s helmet”, by marine biologist Dr. Helen Scales. There is a good reason for this distinction, as these fish have a dark opaque body, but a clear head through which you can see its eyes and other olfactory organs. Spookfish have green glowing orbs for eyes and they always look upward, hoping to catch shadows cast by their prey (crustaceans), when shimmery sunlight hits them. Now, if you’re wondering how they eat with upward-looking eyes, they simply rotate them within their dome of transparent tissue. Feeling spooked yet?

Also Read: How Do Fish See Differently Than Us?

Animals That Use Transparency To Escape Predators

These eels will start off their young lives as transparent-looking tapes before their bellies and sides transition to a brownish-yellow color. Spending their young lives in transparency can ensure their survival until they can fend for themselves. After they become sexually mature, they’re called “silver eels”.

These are rare marine invertebrates found in the cooler Southern ocean waters. They probably need transparent bodies more than any other fish, as they feed on plankton on the water’s surface, which makes them extremely susceptible to predators. The Salpa is a jellyfish-like animal covered with a see-through sheath; underneath this sheath are its muscles, intestines and other organs.

Turritopsis dohrnii are also transparent and a bit smaller than your pinky nail (0.18 inches). A bright red stomach can be seen in the center of its transparent bell, the edges of which are lined with close to a hundred white tentacles. Not only do they exploit their transparency to escape predators, they have also hit the jackpot on survival. It’s one thing to come out alive from harsh environments, but quite another to hit the reset button when faced with your inevitable death. That’s right, these jellyfish never die, but are instead re-born as their polyp stage and go on living forever!

Ghost shrimp (Palaemonetes sp.) have a pretty sweet name, considering how transparent they are! One can only see an orange or yellow spot in the center of their tails. The females are so see-through that their green eggs are clearly visible within their bodies after breeding occurs.

Vitreledonella richardi or the rare glass octopus, are a nearly entirely transparent species, except for the optic nerve, the eyeballs and the digestive tract. They have long elongated eyes with a centralized lens, which could be useful for minimizing the silhouette of the eyes when observed from below.

Also know as the glass squid, these cephalopods are so transparent that the only pops of color you’ll see in them come from their eyes and some visceral nucleus. However, what’s special about this species of squid is that when they’re disturbed, they will hyperinflate with water and release an ink inside itself, quickly becoming a not-so-invisible opaque creature in the blink of an eye! This impressive camouflage swap can be seen in both octopuses and squids, and is an adaptation that can keep multiple types of predators at bay. The first predators are those that lurk in the deep seas and perpetually look above them, hoping to snag any prey that show the tiniest sliver of shadow. The second predators are those that spotlight their prey in “biological” headlights, aka, bioluminescence.

By being able to change from invisible to opaque, octopuses and squids can trick both kinds of predators. Importantly, they have to do this swap in time, because if they don’t, and the bioluminescent light hits their transparent self, it would be like a flashlight shining on a windowpane at night—reflective and very obvious to observers/predators.

If you thought that finding Dory was hard, wait until you see how her newly hatched baby would’ve looked—nearly invisible! The larval forms of Pacific blue tangs and Atlantic blue tangs are just over a millimeter in length and are transparent, as are the larvae of Surgeonfish and moray eels.

Transparency might be much rarer on land, but as always, there are exceptions. From Clearwing butterflies, whose clear wings enable them to blend into backgrounds, to glass frogs that let us directly look into their intestines, bones, and even their tiny beating hearts, life on land also seems to have adapted effective camouflaging techniques using transparency.

Of all the superpowers that the animal kingdom enjoys, the ability to turn invisible is one of the coolest!