Sharks have adapted to blend into their habitats. They can also change their skin tones to match their environment, which helps them trick their prey when they’re on a hunting spree and even attract potential mates.

Being in the presence of a shark can be quite intimidating. A very conventional idea is that they can instill fear in their prey, and they often live up to that reputation. You’ll find that sharks can keep you at the edge of your seat when they star in the thriller genre of movies, but research on these creatures has shown that they have a much deeper level of subtlety to them.

Swimming with a shark might feel like being in a time capsule to the past, because these incredible organisms have been around for about 400 million years. Being the first ever vertebrate predators on Earth, this group of species has even outlived the dinosaurs! 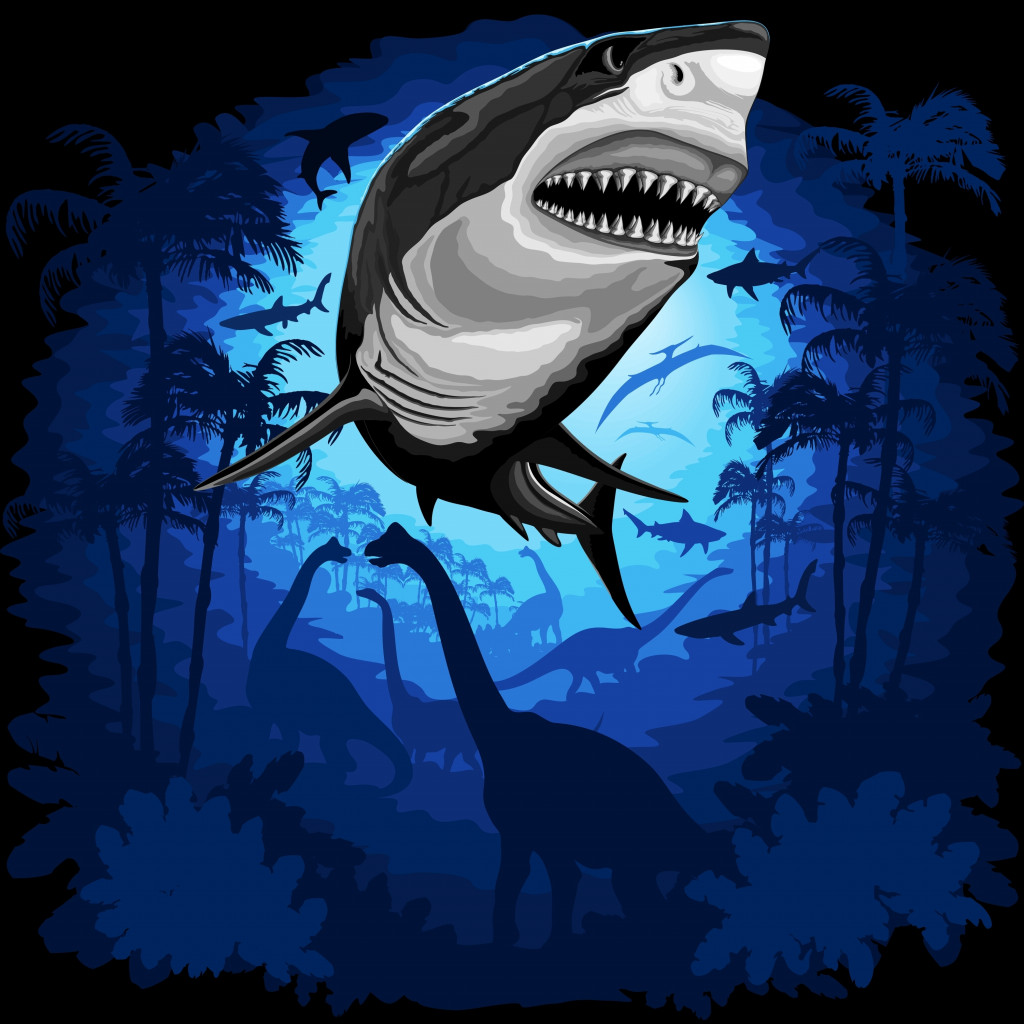 With so many years of evolution in the bag, sharks have shown great resilience and adaptability. They’ve learnt how to be the best predators that the oceans have ever known.

The coloration of an animal can be dictated by its spot on the food chain. Predator or prey, venomous or cuddly and harmless, these characteristics can influence how an animal has adapted to appear. There are millions of creatures that could make a good meal for sharks. And as the movie Jaws reminds us, human beings are also something they‘ll gladly snack on. Time and again, sharks have been proven to occupy the very pinnacle of the aquatic food chain. 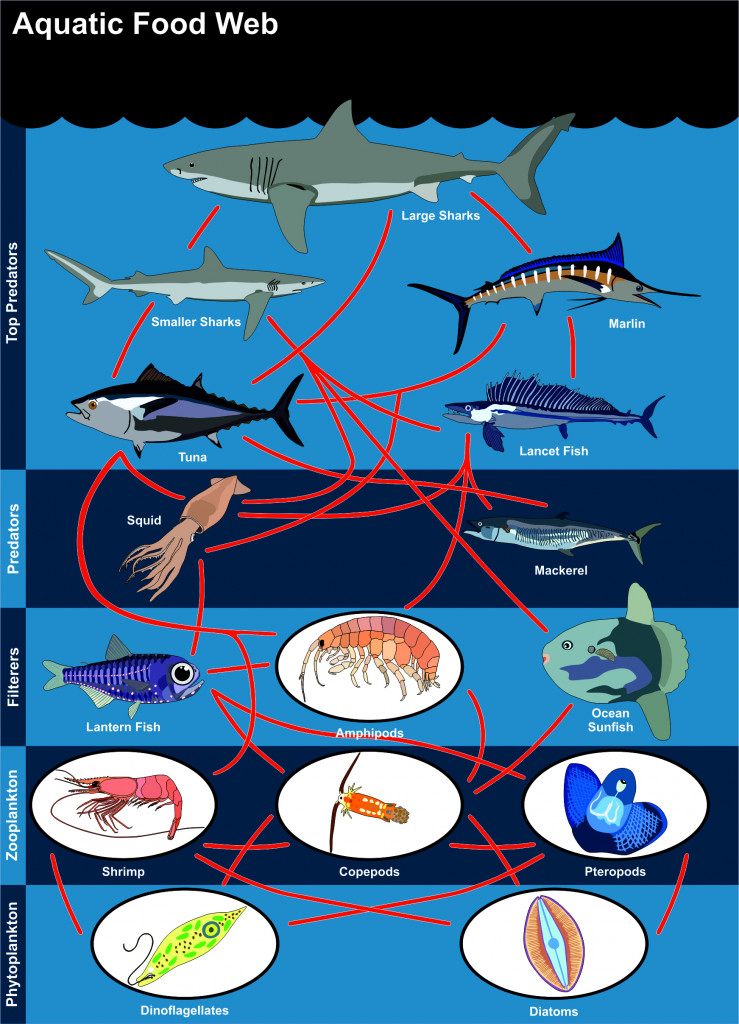 Being at the top of their game, these predators don’t want to be too flashy. Much like a tiger who loves a good ambush, sharks also tend to blend themselves in with their environment to catch their prey by surprise! But how does one blend in an environment that’s just different shades of liquid blue? That’s not a problem for sharks.

Trick Of The Light

The bodies of sharks tend to counter-shade in order to blend with murky and dark blue waters of the deep sea. Well-known sharks like the Great White shark (Carcharodon carcharias), Bull shark (Carcharhinus leucas) and Bronze whalers (Carcharhinus brachyurus) are decked out in neutral grays to go with their creamy underbellies.

While some sharks may play it safe with their color scheme, others like to jazz it up. Stripes and spots line their skin, and as impressive as this may look, these patterns help the sharks blend into the background, especially when they’re preying close to the ocean floor, with plenty of substrates.

The broadnose shark has learned to mimic its surroundings so well that it’s pretty hard to spot it along sandy or rocky shores, which are its frequent hunting grounds.

The wobbegongs that inhabit Australian coral reefs, will go to great lengths to remain as unobtrusive as they can. Not only do their bodies glint with shades of yellow, green and brown, but their skin is accessorized with protrusions and rings. This dress-up acts like a decoy to lure in prey that might be in the vicinity of the coral. It’s almost impossible for them to see a wobbegong camouflaged on their home turf. 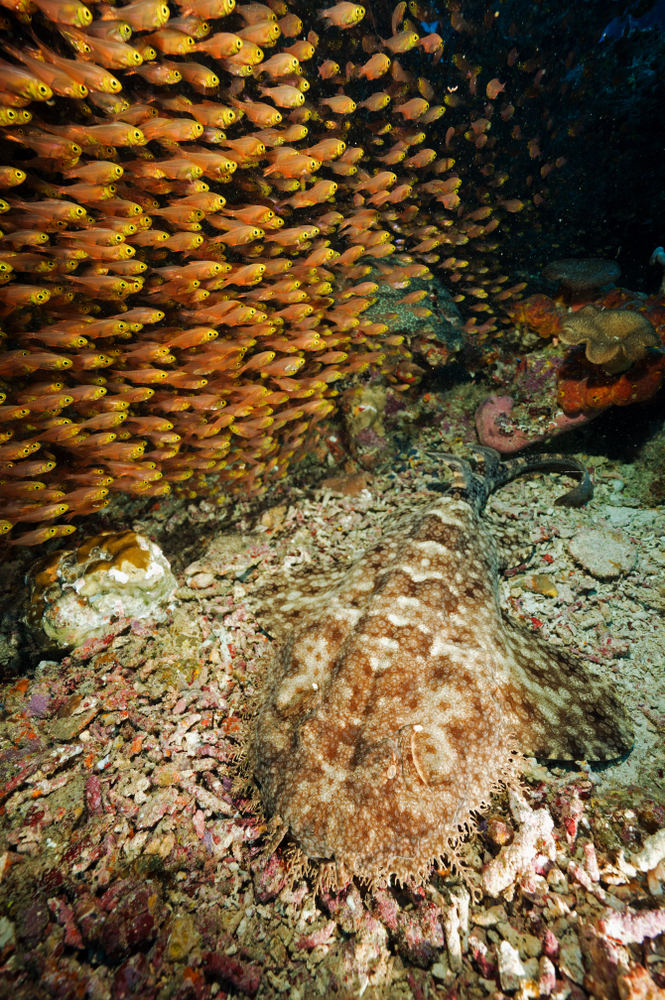 Now that we’ve established how coloration of the shark’s body can be paramount to its predatory nature, let’s see if any of these species can switch their colors to adapt to the different environments in which they lurk.

When shark observers take out their boats to sea, they often see the same shark appearing lighter in the morning and darker on the same afternoon. Upon photographing these breaching sharks and comparing their shades with color boards, observers attributed these changes in the shark’s skin color to hormones.

Also Read: Are There Any Transparent Animals?

The skin cells or melanocytes of these sharks contract, changing to a lighter shade when they’re doused in adrenaline, while a melanocyte stimulating hormone caused their dispersal, giving them a darker shade. Great white sharks change colors to blend into brightly lit surface waters where they hunt for seals. 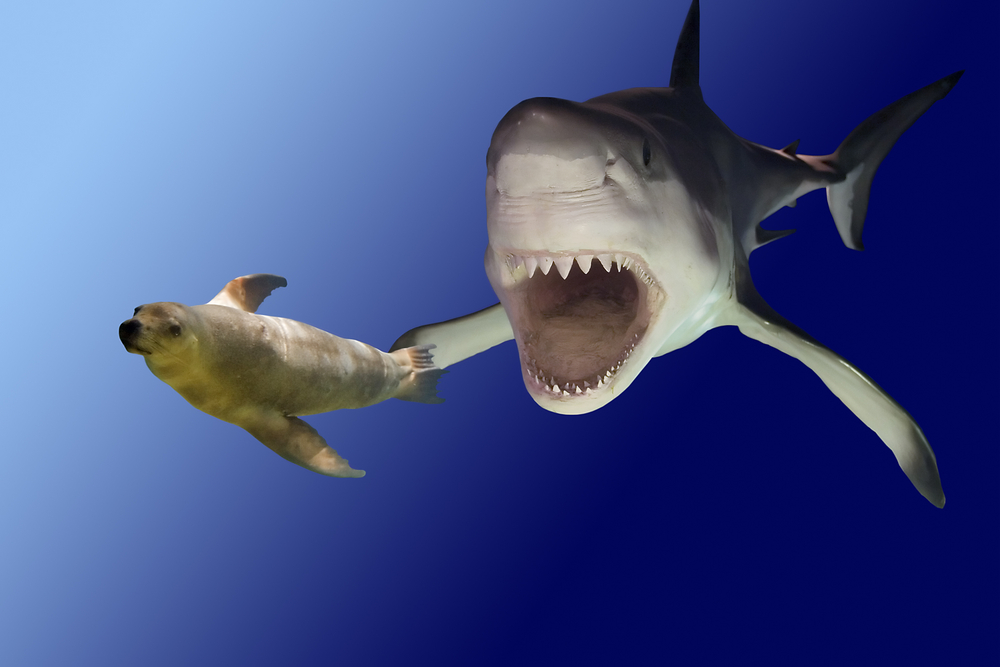 By day, these sharks are an unimpressive color of tan, but by night, they pull out their big guns, luring in close-by creatures to snag a bite. But if they’re so pale, what attracts their prey to them? A built-in light system is quite the trick. Being one of the rare sharks to showcase bioluminescence, they light up their bellies, giving it a green glow.

The light-emitting organs that the cookie cutter shark employs are called photophores. However, these don’t glow in just any random shape; they’re strategically placed on its body, such that a puny fish-shaped area remains shadowed. This then acts like bait, and when a predator spots its “meal”, and approaches it, the sneaky shark turns the tables, taking a cookie-shaped chunk of meat out of the predator-turned-prey, as its prize. What’s left is a round wound on the victim. A classic case of hit-and-run!

Some sharks can be either be bioluminescent (make their own light) or biofluorescent (transform their light), while others can be neither or both. This property depends on the layer of the ocean where they reside. If they call the deep waters their home, they don’t have access to the sun’s photons and have to make their own light. Of the 540 species of sharks in the ocean, about 11% can produce light. If they live in the shallows, they can use sunlight to change colors by contracting their skin cells.

Sharks and stingrays are among the 180+ marine species that can show biofluorescence. GFP or green fluorescent protein helps absorb blue or ultraviolet light and emits this excess energy in the form of green light, as they become unexcited. Swell and Chain Cat sharks have metabolites like GFPs in their skin. In ocean depths, they transform the available blue light into bright green shades that only they can see due to their specialized vision.

The largest vertebrate with bioluminescence on display is the kitefin shark. Sporting large gaping eyes and dark tanned skin, it’s impossible to see it swimming in the deep ocean, but when it glows, it’s hard to miss the blue light show. 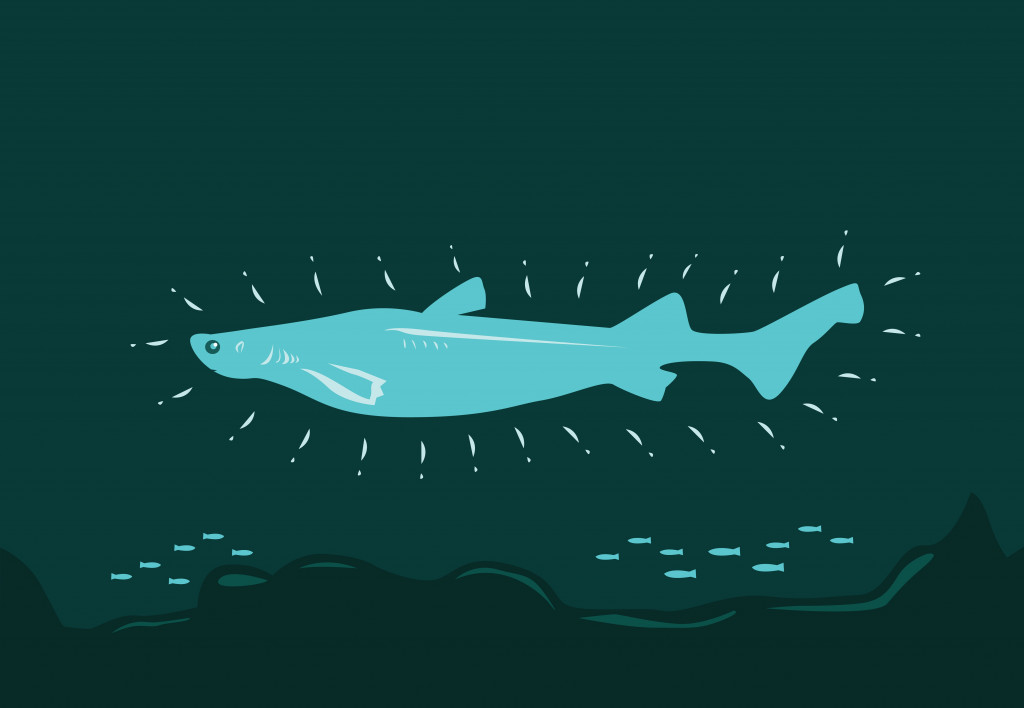 Viper dogfishes might be one of the smaller species of sharks, but they’ll scare the living daylights out of you! Their black exterior and pointy teeth are beast-like. However, this doesn’t make them unattractive, because when it’s time to attract a mate or attack their prey, the photophores on their undersides light up. Pretty deceptive!

One species of shark not only changes its color, but also its pattern, as it ages. Zebra sharks are zebra-striped as juveniles and leopard-spotted as adults. And until 1823, the two different stages were considered to be two separate species! The stripes help zebra sharks camouflage, as it resembles its reef habitat, as well as its main predator, the banded sea snake. 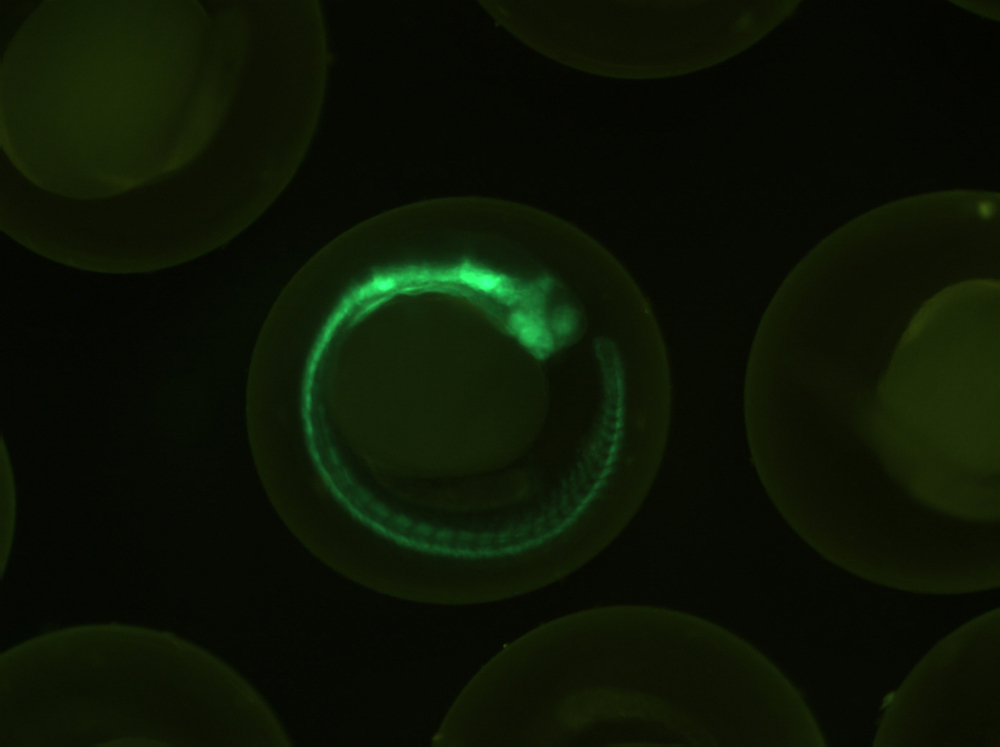 Hammerhead shark pups are born with shades of black with white-tipped fins, but as they grow, adding small fish and shellfish a part of their diet, their skin starts to darken on the bottom and remains light on top, which enables them to camouflage like a chameleon! What’s more, hammerheads can actually get a tan, and are one of the only fish known to get a sunburn. 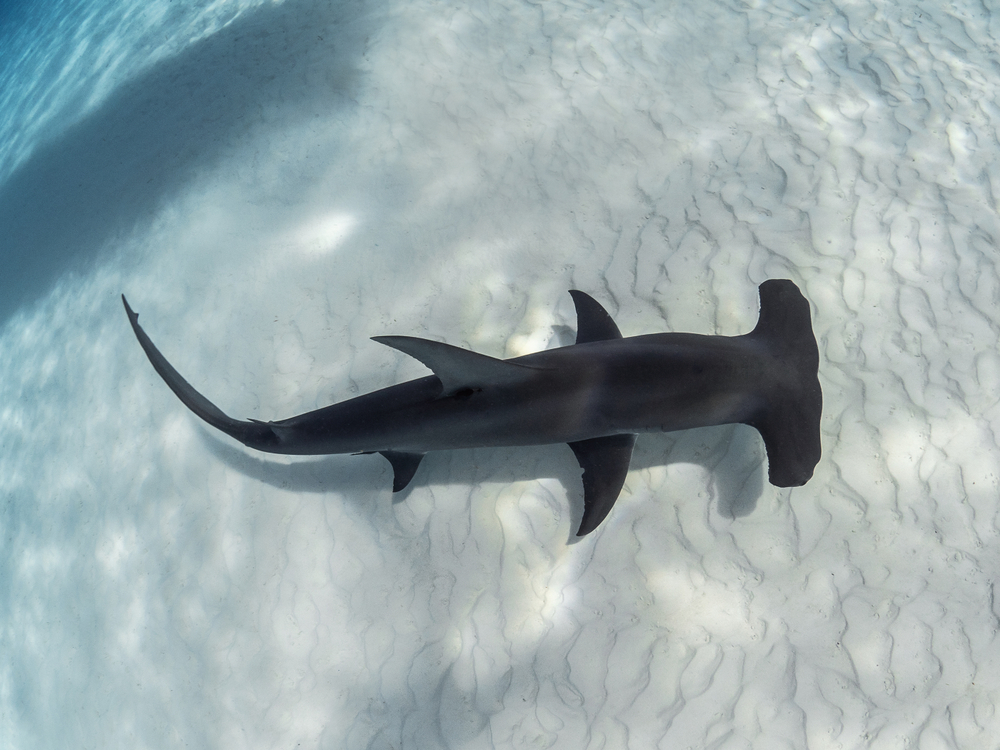 Sharks are intelligent and tactical when it comes to predation and finding mates. Although shark attacks can be vicious, their manner of approaching prey has shown us that there is also a subtle and gentle side to these fierce giants. Research on sharks helps us understand how they always manage to stay atop their food chains and fit into ecosystems so seamlessly.

Now you know why there are hardly any survivors in Deep Blue Sea or The Meg. They just never saw the sharks coming! 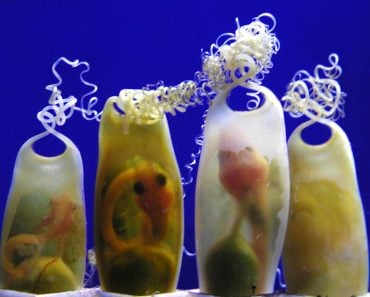 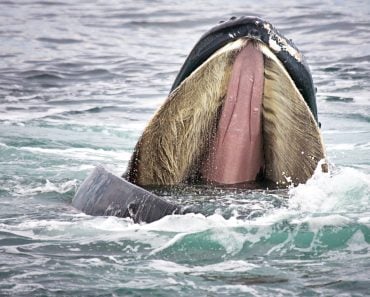