The octopus is one of the most fascinating creatures you can find underwater, and the more you read about this animal, the more intrigued you’ll become!

These creatures belong to the Octopodidae family and weigh between 3-10 kgs. They have a short life span (1-2 years) and have 33,000 genes, which is much more than what humans possess! They are found in the ocean and prefer warm and tropical waters. Most octopuses remain close to the ocean floor, in dark or deep waters, although a few types live nearer to the surface of the ocean. They are carnivorous and often feed on clams, lobsters, fish and shrimp.

Octopuses have eight arms and three hearts; they are also boneless, have blue blood, and can squirt ink to scare predators away. Adding to this cool list of features is their ability to squeeze through incredibly tight spaces! This is quite useful when they get trapped in a sticky situation, don’t you think?

They’re also incredibly smart and are capable of using tools, such as coconut shells! 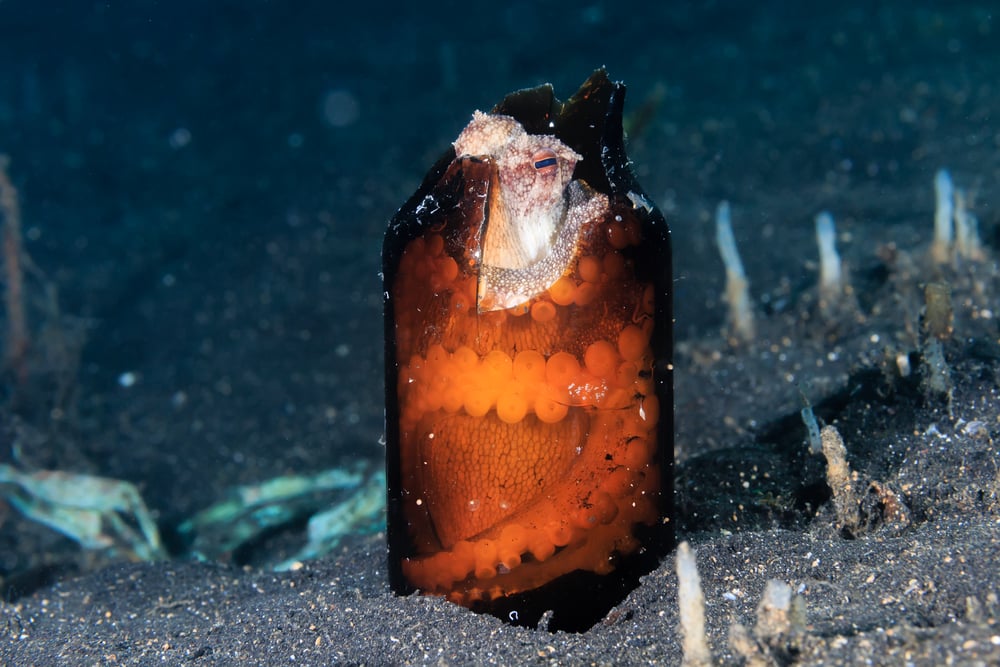 The octopus belongs to the class Cephalopods, which are an exclusive group in the animal kingdom. Animals belonging to this class can change their color based on their surroundings or when performing specific activities.

Octopuses, in particular, are good at blending in with their surroundings, either to camouflage themselves or to communicate with other individuals. In fact, they can change their skin color in the blink of an eye to match their surroundings, make them invisible or even make them stand out or appear more intimidating. If you’ve never seen an octopus changing its colors, watch it happen here.

How do octopus change color?

Octopuses have specialized cells below their skin surface known as chromatophores. Each chromatophore has a stretchy sac called the cytoelastic sacculus at its center. Each of these sacs is filled with pigments of different colors—red, yellow, black or brown. 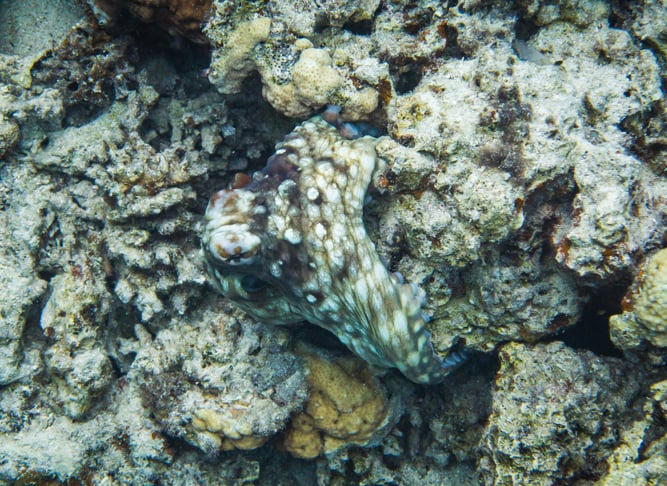 Can you spot the octopus in this photograph? (Photo Credit: marketa1982/Shutterstock)

Each of the chromatophore cells in an octopus is attached to a nerve. The tightening and relaxation of the cells are controlled by the octopus’ nervous system. Thus, when an octopus wants to camouflage itself, its brain signals the chromatophores to expand in an instant!

Why does an octopus change its color?

There are many reasons why an octopus might need to change its color. Here are a few of them:

Just imagine how difficult it must be to survive in the wild. You’re constantly worrying about where you’re going to find your next meal from, while not becoming someone else’s dinner! In this regard, the octopus’ color-changing ability gives it an advantage over other animals. 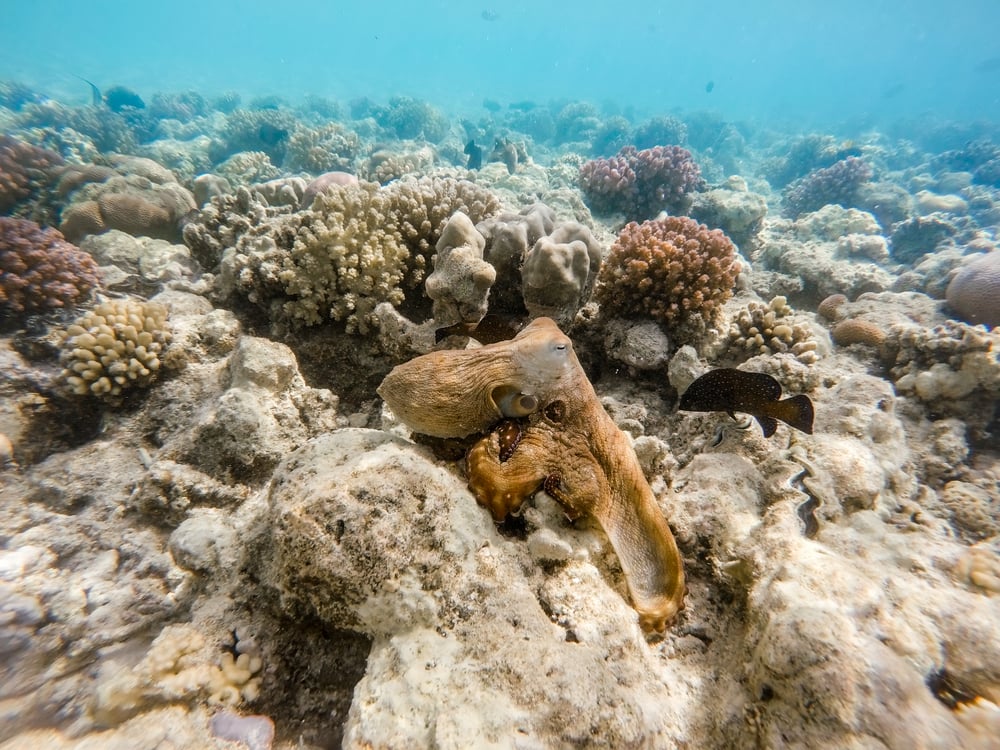 An octopus hiding from its predators. (Photo Credit : Artush/Shutterstock)

Octopus can mimic other animals and neighboring habitats, and by doing so, they can camouflage themselves very effectively. Several studies have been able to observe this phenomenon. In one such study, researchers found that octopuses would swim as fast as they could to join a group of fish. They would then change their skin color to look exactly like the fish! This enabled them to hide easily when there were predators around, particularly those that hunted using visual cues.

Octopuses are known to change their color while attacking their prey. This is one of the many amazing strategies the animal uses to trick their prey into thinking they’re not octopuses!

From this study, researchers discovered that the color changes were due to locomotor activities and postural adjustments.

Several creatures in the animal kingdom have mastered the art of mimicry, allowing them to trick their common predators. From camouflage to playing dead, animals have a whole list of tricks up their sleeve!

The mimic octopus (Thaumoctopus mimicus), in particular, is one such fascinating animal that does a phenomenal job in tricking predators! The relatively small mimic octopus lives mostly in shallow waters and is pale brown. What makes this octopus genuinely amazing is that it doesn’t stop at just camouflaging itself, but can also change the way it moves to mimic other animals! 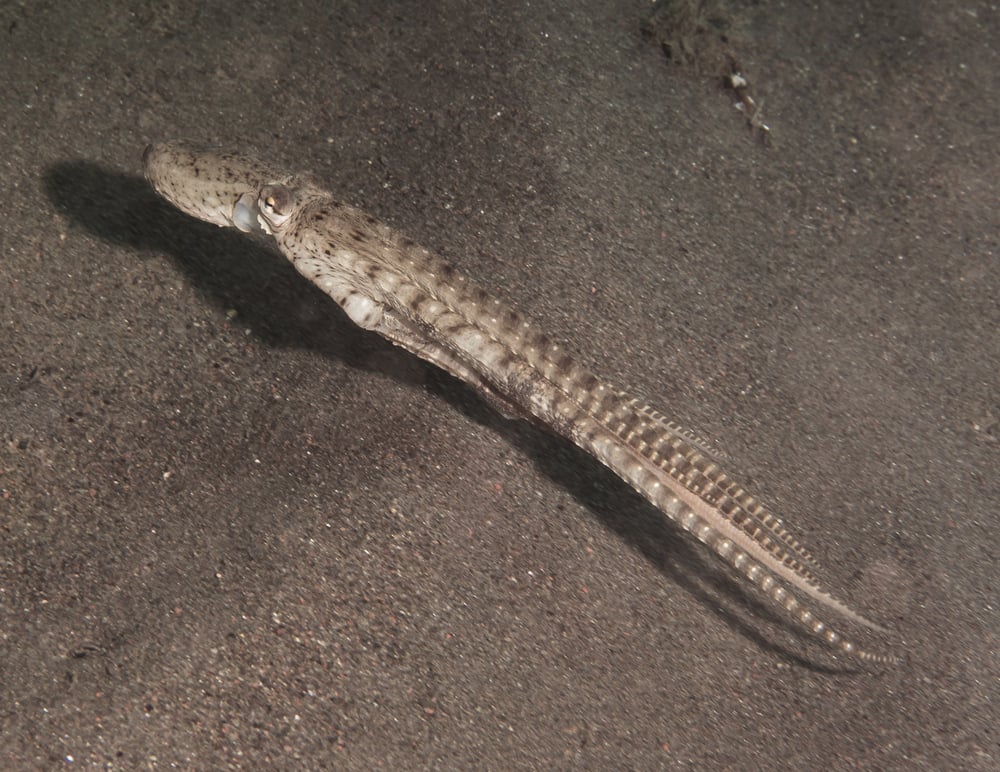 For instance, Indonesian researchers found that the mimic octopus changed its color and arranged its body to imitate various fish, such as the lionfish and damselfish (see photographs below). Recently, scientists discovered that octopuses also change their colours while dreaming in their sleep!  This discovery emphasized the role of the optic lobe in octopuses, which emits neurons when the octopus is sleeping. In turn, the chromatophores are expanded and the pigments are released which makes octopuses flicker while they are sleeping.

So, to answer the question of can an octopus change the way it looks? As we have clearly seen… indeed it can!