Octopuses need their 8 limbs for everything from moving around to catching prey and escaping danger. So why would they begin to chew off their own limbs? Are they hungry, stressed, or infected?

An octopus isn’t just an animal with a large head and eight tentacles. It’s one of the smartest marine inhabitants of our planet. But sometimes, they go rogue, to the point where they may hurt themselves by eating their own tentacles.

Automutilation is a phenomenon where an animal mutilates itself. There are two types of automutilation: autotomy and autophagy.

Autotomy occurs when an animal willfully starts to bite off or sever a particular body part. Why would an animal want to mutilate itself intentionally? If a creature finds itself trapped, or if a part of its body gets damaged, it makes the call to cut off that part of its body to avoid further infection and pain. It can save the animal’s life.


Autophagy, on the other hand, also referred to as ‘self-eating’, is a form of cannibalism. Even though autophagy is seen in quite a few marine creatures, octopuses have been observed to practice it more often than most.

The mystery of why the octopus ate its arm

Since scientists first noted this perplexing behavior in their captive octopuses, they tried to untangle the reason behind it.

Firstly, there’s no question of survival coming into play when the octopus is safe in an aquarium. Next, they wondered if it might have something to do with hunger. Subsequently, they resorted to feeding the octopuses more than usual, assuming that a well-fed octopus would stop harming itself, but to no avail.

What if it was the stress of being held captive that led to such morbid behavior. But no change in environment affected this strange behavior.

That said, scientists do think that stress may well be a contributing factor.

In 1998, Dr Budelmann studied 161 cases of autophagy in octopuses in his laboratory.

Of the 84 octopuses that were recorded, 74% amputated only one of their arms, 19% bit off two, while roughly 3% had caused harm to three of their arms. Post-amputation, 50 cases were studied, of which, all of the octopuses died within a short span of one to five days. 80% died on the very first day following amputation.


Prior to autophagy, these octopuses would display uncoordinated movements of their tentacles or show instability. This could be due to the disease, which affects the nerve cords and leads the brain to go haywire. To shed some light on what actually happens, scientists tried to send the brains of these octopuses in for nueroanatomical studies. However, they could not observe anomalies in the lobes of those brains.

Additionally, pieces of arms that were bitten off were not always eaten by the octopus. This ruled out hunger as the cause for this behavior.

The authors suggest that the self-amputation may be due to an unknown infection that takes about one to two weeks to display symptoms in a octopus. 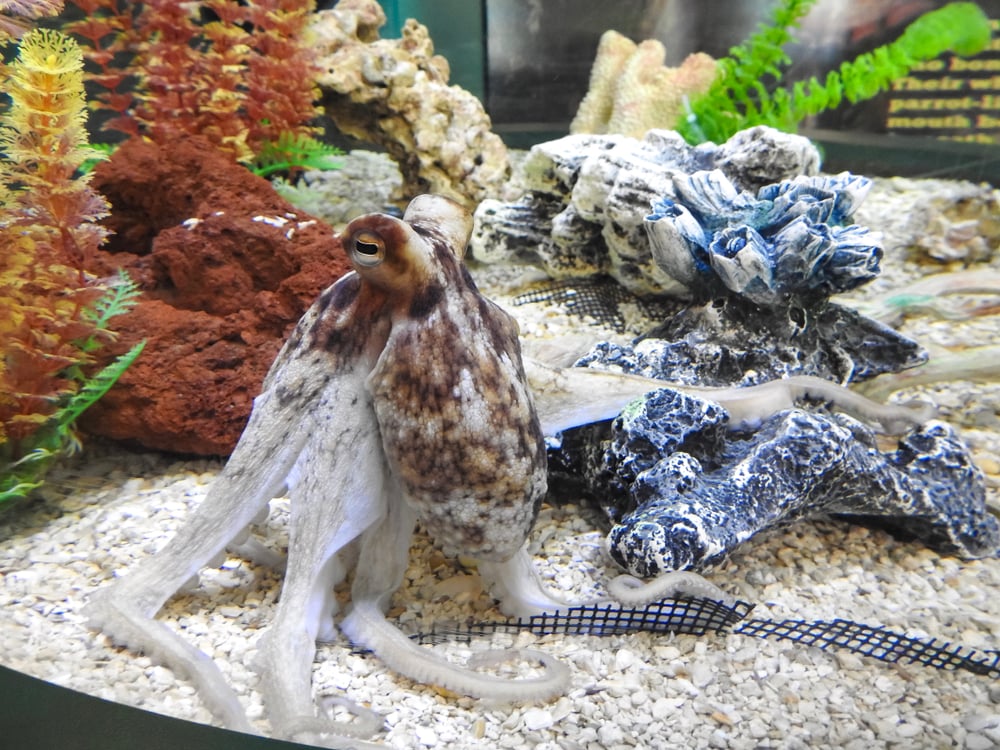 This behavior has only ever been recorded in octopuses in captivity.

Deteriorating water quality in tanks may worsen the situation and amplify their infection. The more the infection spreads, the more the octopus tries to get rid of it, and the octopus ends up as a carcass with tattered arms.

Octopuses and squids in aquacultures show higher chances of engaging in cannibalism and autophagy, since the animals are kept in compact spaces.

Female octopuses undergo hormonal changes after they mate. A gland responsible for controlling the processes of aging and sexual development was linked to the death of female octopi as soon as they lay their eggs. In females that had mated, the optic gland secreted more sex hormones and cholesterol precursors.

These changes in the hormones set off a ‘self-destruct’ reaction. The female octopus doesn’t eat and stays near the eggs to protect them from any predators. There are also reported instances of the female eating her tentacles and other destructive behaviors. Eventually, the female octopus dies.

When the researchers removed the optic gland from female octopuses, the octopuses lived longer and without further incidents of cannibalism. 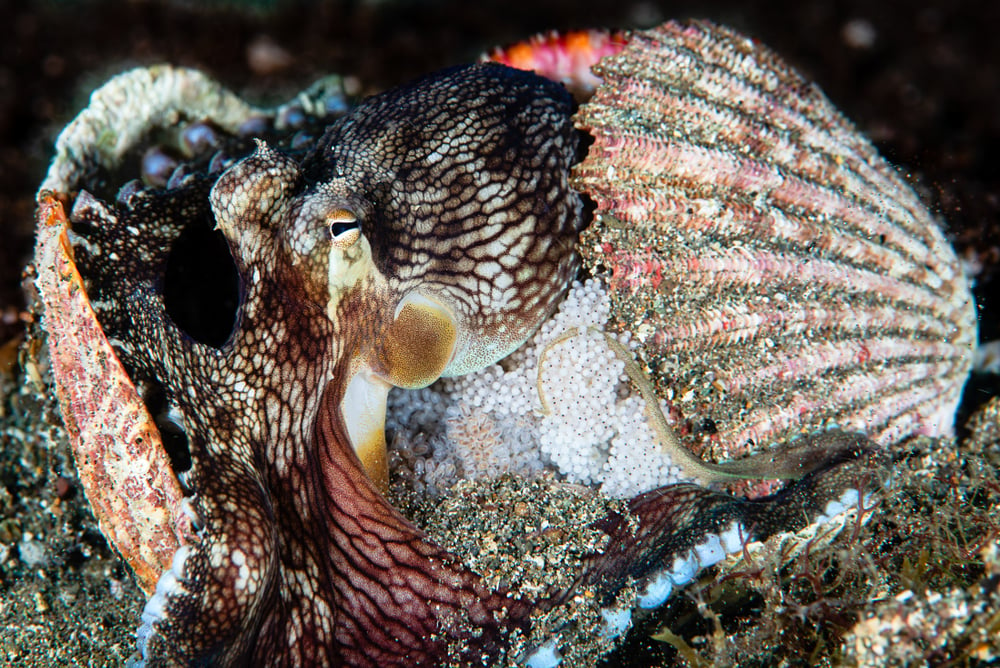 A female octopus with its larvae (Photo Credit : Bass Supakit/Shutterstock)

Self-injury might sound very bizarre, at first, but the fact that it is employed by female octopuses to protect their offspring from mortality at a young age, is quite impressive.

Studying why an organism would cause itself injury can also help us understand the importance of a natural ecosystem. Stress, one of the strongest reasons for why octopuses bite off their arms, can be triggered much more easily in those that live in captivity. This just goes to show that removing an animal from its natural habitat can deeply and dangerously alter its state of mind.