A chameleon changes its color to adjust its body temperature to the outside temperature. They change color by changing the arrangement of certain skin cells called iridophores. These cells have nanocrystals that reflect light of different wavelengths, depending on their physical orientation.

The color-changing ability of chameleons has always intrigued human beings. We often think about how cool and easy life would be if we could change our colors, blend in with our surroundings, and camouflage ourselves just like a chameleon can. It would definitely help us escape from awkward situations more easily!

How Does A Chameleon Change Its Color?

Unlike octopuses and cuttlefish, who change color by moving around the pigment in their cells, chameleons have specialized cells called iridophores that do the job for them.

A 2015 study published in Nature Communications looked at how five adult male, four adult female, and four juvenile panther chameleons changed their colors. They found that chameleons have two layers of these iridescent cells—iridophores.

These iridophores have pigments and nanocrystals within them that reflect light of different wavelengths. The chameleon changes its color by exciting or relaxing its skin, changing the density of the upper layer of iridophores. 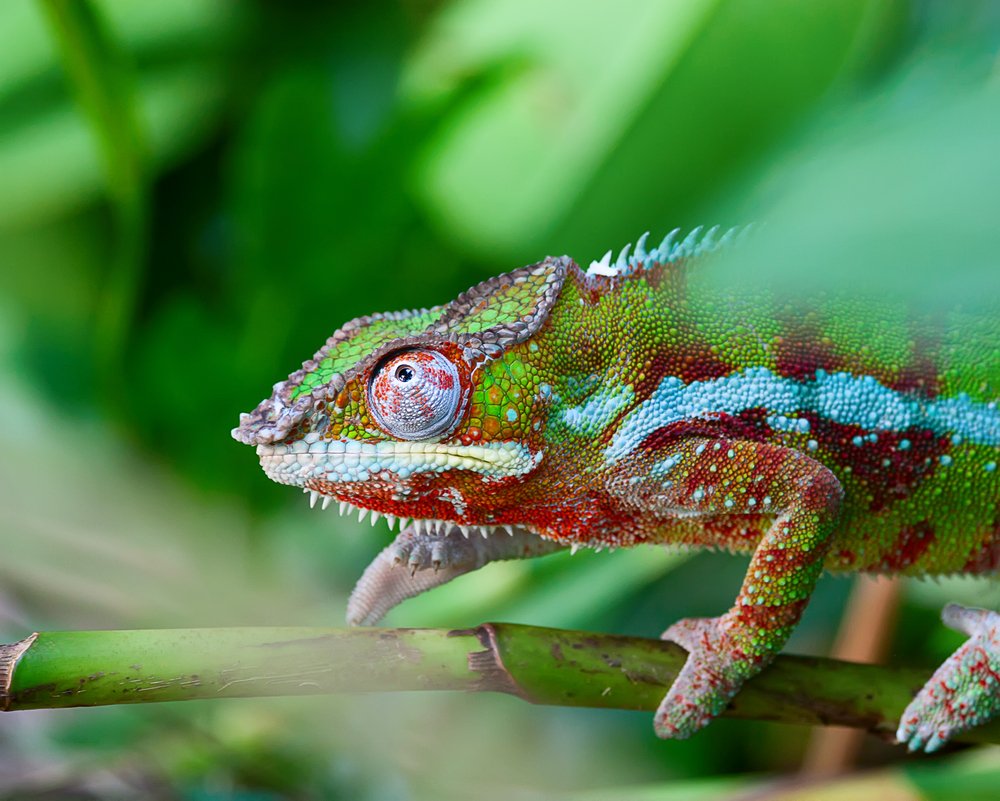 The red color is caused by a red pigment (erythrophore) and the green is the result of a yellow pigment (xanthophores), with the blue wavelength being reflected from the iridophores. (Credits: Fedor Selivanov/Shutterstock)

A chameleon’s skin has a few different cell types that contribute to its color. The uppermost layer is composed of cells that contain a yellow pigment—xanthophores—and those that have red pigment—erythrophores—which are mainly present in striped regions. Under this layer lies the iridophores, which reflect different wavelengths of light depending on how they are packed and ordered. Finally, the last layer is composed of melanophores. These melanophores have extensions that reach the uppermost layer of the skin.

When a chameleon is in a relaxed state, the nanocrystals in the skin are closer to each other and they reflect shorter wavelengths, like blue. When a chameleon is excited, the distance between nanocrystals increases and they reflect longer wavelengths, such as red, orange and yellow. These colors are seen most vividly in striped bands across the chameleon’s body.

A chameleon’s green color is the result of yellow and blue wavelengths. The yellow from the xanthophores, plus the blue light reflected from the iridophores, results in the color green. In the relaxed, neutral state, the green is light and vibrant.

When in a suppressed mood, such as when it needs to hide, the chameleon turns to darker shades, sometimes turning a dark brown. This is due to the melanophores dispersing pigment to the upper layers through their extension.

Why Does A Chameleon Change Its Color?

Chameleons don’t change their color for camouflage, as most people think. They can’t perfectly match your crazy pink curtains or blend into your blue couch. As much as Pascal from Disney’s Tangled might change his colors on whim, alas, that is fiction for real chameleons, although their skin color does serve some camouflaging purposes.

Chameleons spend most of their time in trees, high up amidst the brown branches and green leaves. Their own green and brown hues do allow them to blend into the leafy background, but their ability to change color isn’t intended for that.

Chameleons, as recent research has found, change color for two main reasons—to communicate and to control their temperature.

Animals have evolved different ways to communicate with one another. Humans primarily use language, fireflies use light, and chameleons use color. The chameleon’s color change can indicate its mood. An angry chameleon will have a darker color, whereas a chameleon in a relaxed mood will have a lighter color.

A 2013 study looked at the coloration in male chameleons during competition with other males. The researchers reported that different coloration patterns in different body regions sent different signals to their competitors. Males with a darker head were more likely to win fights, while those with brighter stripes were more likely to approach their opponent first during the competition. 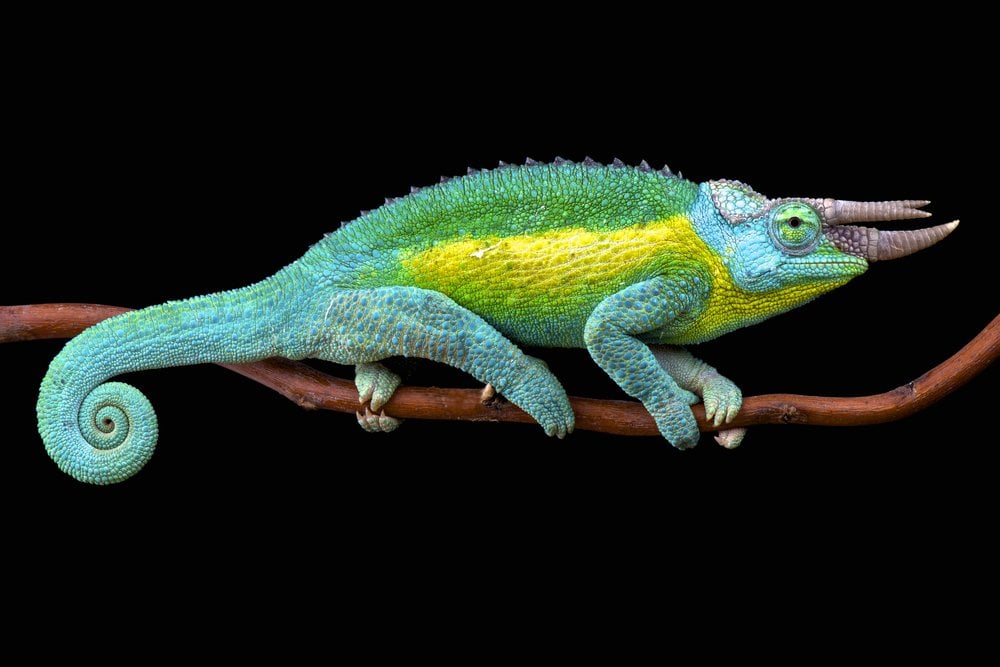 It is usually the male chameleons that perform color change, either to win a mate or warn predators. (Credits: reptiles4all/Shutterstock)

This is mainly something that male chameleons do. Males might change their color to attract a mate. A male chameleon will switch to lighter hues to show the female how healthy and sexy he is, or he might darken his color if he sees another male. A chameleon, upon seeing a rival, changes its color to darker shades in order to assert dominance.

Female chameleons also have color-changing abilities, but they are limited. They’re rather dull-colored in comparison to their male counterparts.

For example, the panther chameleon is found in open, dry environments like those of Yemen. The iridophores present in these chameleons help decrease the absorption of sunlight, which is crucial for survival. A study published in 1993 found that a dark coloration was frequently present in the morning time. The researchers concluded that this could serve to reduce basking time for chameleons. 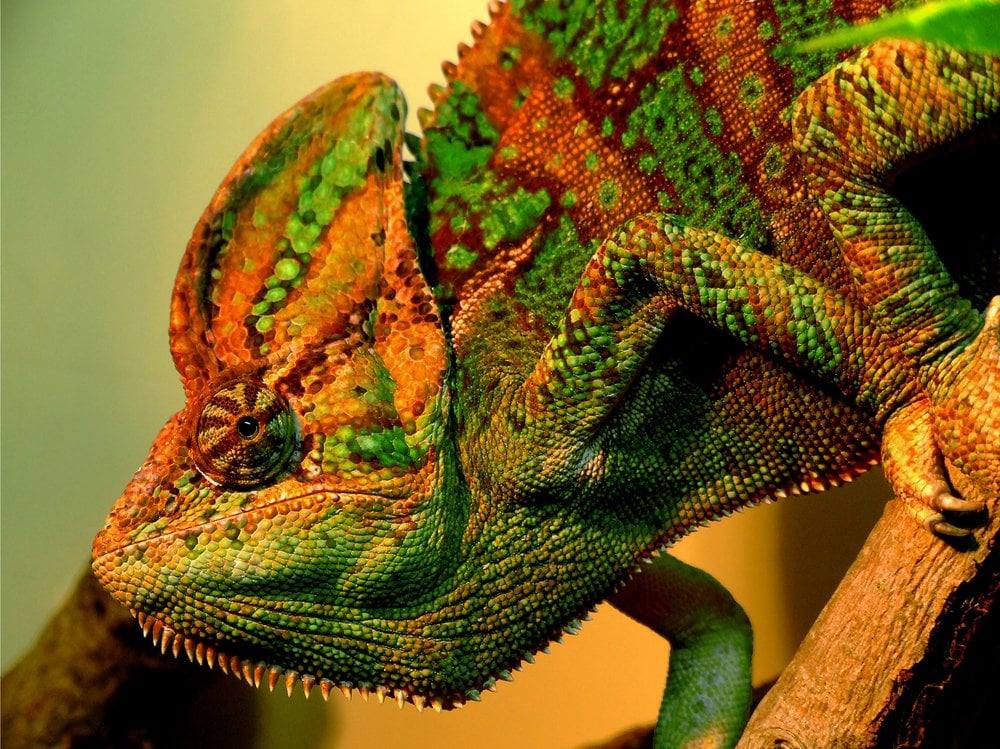 The iridophores in these chameleons help decrease the absorption of sunlight, which is crucial for survival. (Credits: Andrey Lavrov/Shutterstock)

Color change in chameleons and other animals still isn’t fully understood. The range of occasions for which chameleons adapt their colors is still being outlined. The more exciting question seems to be how such color-changing evolved in the first place. From complex nanocrystal lattices to pigment dispersal in the blink of an eye, the intricate ways that animals change color is stunning, fascinating and downright magical!